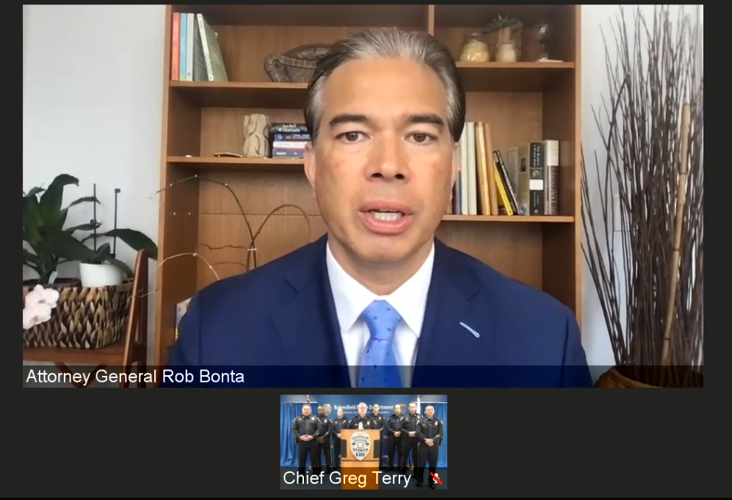 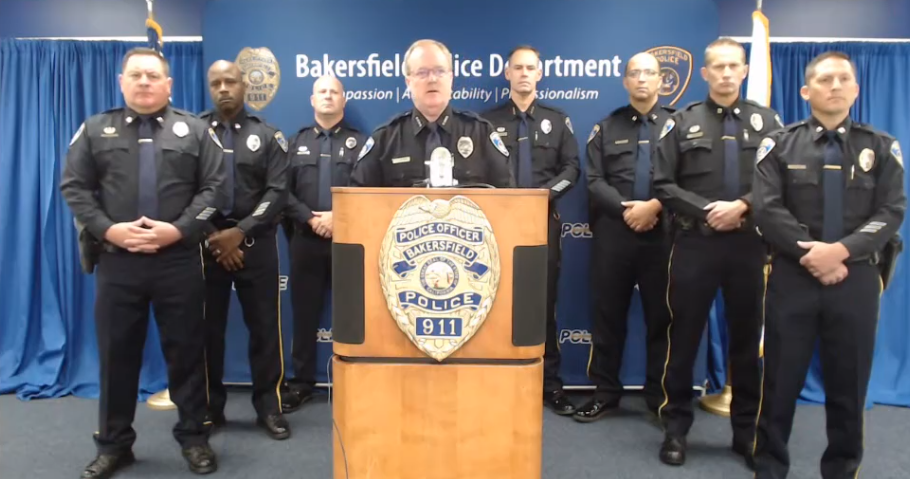 Bakersfield Police Chief Greg Terry speaks during a virtual press conference on the conclusion of an investigation into BPD by the Attorney General's Office.

Bakersfield Police Chief Greg Terry speaks during a virtual press conference on the conclusion of an investigation into BPD by the Attorney General's Office.

In a civil complaint, the attorney general alleged BPD engaged in a pattern of unreasonable force, stops, searches and seizures and failed to exercise appropriate supervision, in addition to other violations.

In response to the investigation, Bakersfield has entered into a stipulated judgment with the California Attorney General's Office. The agreement allows the city to legally avoid fault for the alleged violations in exchange for enacting a long list of reforms sought by state officials.

"It aims to inform and improve the Bakersfield Police Department’s policies and practices," Attorney General Rob Bonta said in a virtual news conference on Monday. "It will work to strengthen the trust between the community and law enforcement, something that has never been more critical."

During the press conference, BPD Chief Greg Terry denied the attorney general's accusations, but said the department would work to uphold the agreement between the city and the state.

He described the agreement as a path forward for both the city and the state, while Bonta added the reforms were a blueprint for other police departments across California.

"The Bakersfield Police Department holds itself to the highest standards of conduct to all of our residents. We do everything possible to make sure our community is safe and our residents are treated with respect," Terry said. "We believe the state’s concerns are unfounded and we have nothing to hide."

Started in 2016 by then-AG Kamala Harris, the state investigation looked into allegations BPD and the Kern County Sheriff’s Office routinely used excessive force in a manner that violated the civil rights of residents.

Late last year, KCSO entered into a similar agreement with state officials after its investigation concluded before BPD’s.

In both cases, an independent monitor will ensure the BPD and KCSO stick to the reforms they have agreed to.

“We have a very strong, clear, firm and certain commitment to changes. There’s been throughout this whole process a commitment to making changes that will improve and provide a pathway forward,” Bonta said. “I expect to see those changes implemented.”

No specific incidents were mentioned in either the news conference or documents filed in court by the state. Instead, the Attorney General’s Office said BPD’s policies allowed its officers to engage in patterns of conduct that violated state and federal laws.

The complaint alleged BPD violated the Fourth and Fourteenth amendments of the U.S. Constitution, which ensure a right against illegal searches and seizures and guarantees equal protection under the law to all citizens.

The agreement compels BPD to carry out broad policy revisions, including limits to the use of canines, the requirement of investigations into any use of force above a standard handcuffing, enhanced anti-bias training for officers and a revision to hiring policies to promote diversity.

BPD says many of the policy changes have already been enacted, either in response to the beginning of the attorney general’s investigation or changes to state law.

One of those changes is the department’s authorization of deadly force. Previously, BPD had allowed officers to use deadly force when “reasonable.” Following a bill passed in 2019, BPD revised its policy to authorize deadly force only when “necessary” to defend against an imminent threat of death or bodily harm.

The department has been criticized for over-using deadly force. A study by the American Civil Liberties Union of Southern California found BPD had the second-highest rate of killing in the state and the ninth highest in the country.

In the study, the ACLU faulted the department’s vague use-of-force policy, which it said failed to adequately define the scenarios under which deadly force was authorized.

“It will not, on its own, eliminate deeply harmful practices such as the use of canine force or discriminatory traffic stops for excessive force and intimidation, especially on Black and Brown community members,” staff attorney Stephanie Padilla said in a statement. “It is our hope going forward that the city of Bakersfield is more attentive to the community's concerns and calls for change so that yet another multi-year civil right investigation of its police department is not again required in the future.”

The department has developed a five-year plan to meet the requirements of the judgment. If the Attorney General’s Office determines sufficient progress is not being made, it could sue the city to force changes.

But despite the city’s denial that constitutional violations occurred, BPD has signaled it is willing to work toward the vision outlined in the agreement.

“This is not about denying the allegations,” Terry said. “It is really about looking forward, and utilizing a very transparent agreement to demonstrate our police department is professional, accountable, transparent and connected to the community, and that’s what my focus is on.”

Revise use-of-force policies and principles to include focusing on the concepts of necessity, proportionality, and de-escalation; require officers to intervene; define an imminent threat justifying lethal force that is consistent with current California law; prohibit the use of electronic control weapons on handcuffed individuals and children; require employees to avoid restraining a subject face down whenever possible; and provide that the conduct of both the officer and subject leading up to a use of deadly force must be included in evaluating the incident;

Modify canine-related policies and training, ensuring that canine deployments are carried out in a manner consistent with “bark and hold” techniques to search for and locate subjects, rather than immediately resorting to force;

Expand and improve use-of-force reporting, requiring anything above a standard hand-cuffing to be reported, and holding officers accountable for material omissions or inaccuracies in use-of-force statements;

Require supervisory investigations for all reportable uses of force, taking steps to hold supervisors accountable for not detecting, adequately investigating, or responding to force that is unreasonable or otherwise contrary to policy;

Regularly assess trends in use-of-force data, and meet with a community advisory panel to receive input on policies and procedures from community representatives and organizations;

Analyze the Racial and Identity Profiling Act data on a semi-annual basis and consult with the monitor to develop any necessary improvements to policies and procedures related to bias-free policing;

Ensure stops, searches and seizures comply with the law, as part of an effective overall crime prevention strategy that does not contribute to counter-productive tension with the community;

Enhance and revise training with respect to investigatory stops, reiterating that race, color, ethnicity, national origin, religion, gender, gender identity, disability, or sexual orientation are not to be used as a factor in establishing reasonable suspicion or probable cause, except as part of actual and credible descriptions of a specific suspect;

Provide crisis intervention training to all dispatchers and their supervisors, as well as establishing a preference for peace officers who are specifically trained in dealing with individuals in mental health crisis or suffering from a mental health disability to respond to such calls for assistance;

Take steps to ensure timely and meaningful access to police services to all members of the Bakersfield community, regardless of their ability to speak, read, write, hear, or understand English;

Review and revise as necessary the recruitment, hiring, and promotion program, in order to maintain high-level, quality service through efforts to successfully attract, hire, and promote qualified officers who reflect the diversity of the Bakersfield community;

Develop a community engagement plan, continuing to constructively engage with the community to ensure collaborative problem-solving and bias-free policing, as well as to increase transparency and community confidence; and

Ensure all allegations of personnel misconduct are received, documented, investigated, and adjudicated, publishing an annual report of personnel complaint data to be made publicly available by April 1 of each year.