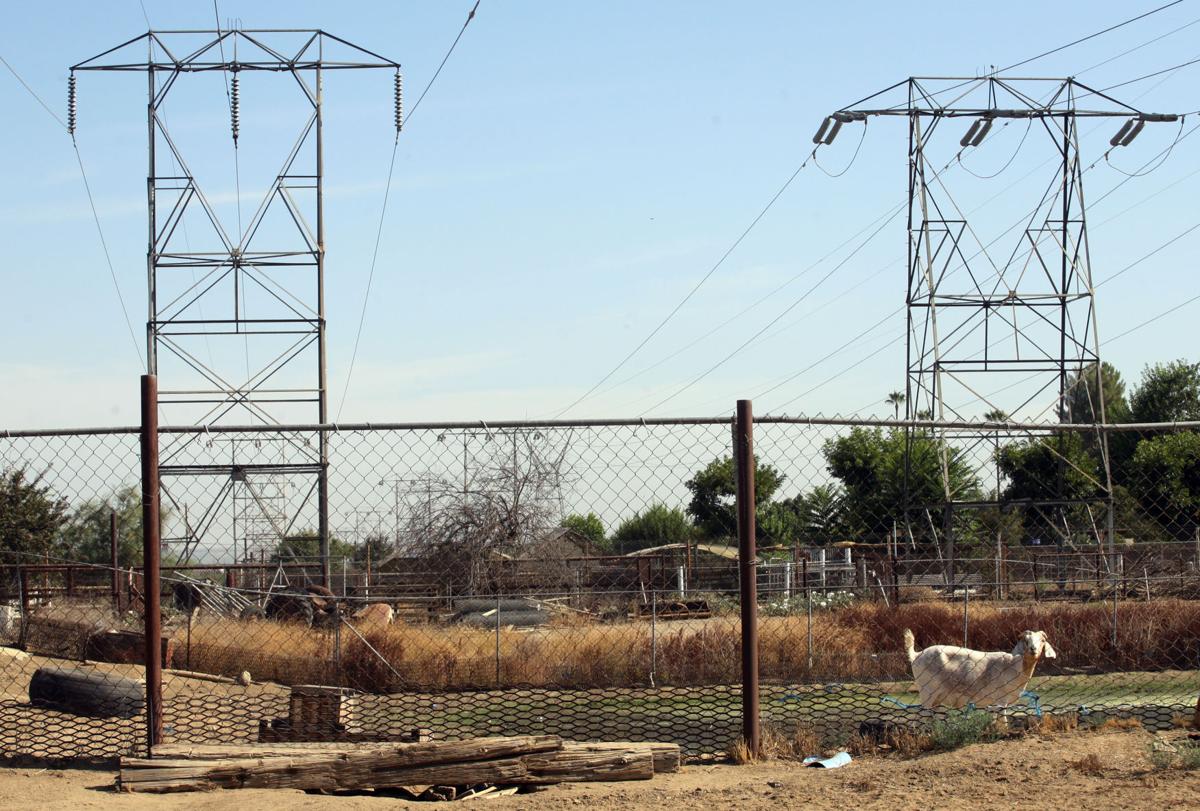 Southern California Edison electrical transmission lines in Lamont. The utility has said up to 12,000 people in Kern County — mainly in Tehachapi and the Kern River Valley —  could be impacted by precautionary shut off of power over the next few days. 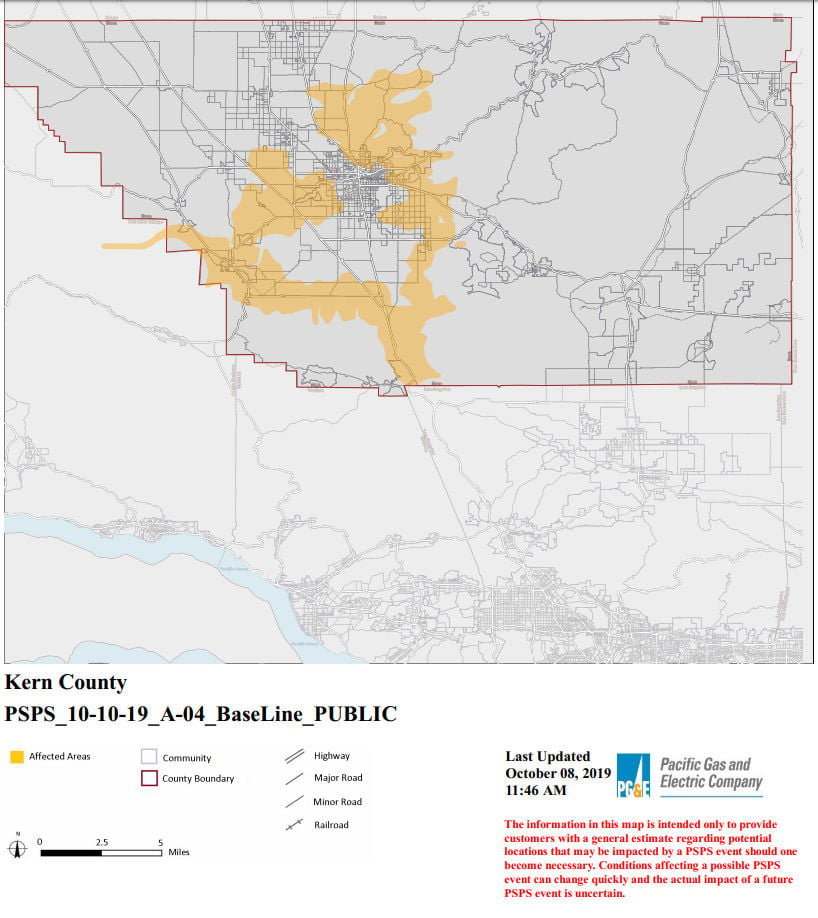 Southern California Edison electrical transmission lines in Lamont. The utility has said up to 12,000 people in Kern County — mainly in Tehachapi and the Kern River Valley —  could be impacted by precautionary shut off of power over the next few days.

Pacific Gas and Electric Company said Wednesday night that 4,600 Kern County customers could be impacted by a third phase of power shut-offs, a significant drop from the previously estimated 42,000 local customers that could have potentially been impacted.

PG&E officials said during a press conference they are in the process of notifying which customers will be impacted by an outage. A timeline for when the outages will occur was not provided, but the Kern County Facebook Page said shut-offs will take place early this morning. Specific areas where outages will take place was also not indicated.

Several Bakersfield residents prior to the start of the 6 p.m. Wednesday press conference received a notification stating a planned power outage would not occur in their area.

At approximately noon Wednesday, as a result of high winds in areas with elevated fire risk, power was shut off to 65 Southern California Edison customers in unincorporated portions of Kern County. Communities impacted included Horse Canyon and Bird Spring Canyon.

Katie Allen, a local PG&E spokeswoman, explained factors that could trigger the Public Safety Power Shutoff in Kern County include red flag warnings, low humidity (20 percent and below), high wind speeds (25 mph and above), conditions of dry fuel on the ground and live vegetation and on-the-ground real-time observation from the PG&E wildfire safety operations center and field crews.

Affected residents will receive notifications when to expect their power to be restored. Allen said it could take 24 to 48 hours after the wind event has ended for power to return, possibly leaving customers without power for several days.

“We have the wind event ending mid-day on Friday, but wind and weather conditions can change,” Allen said. “When that does change, should we execute a Public Safety Power Shutoff, we can start patrolling our lines in Kern County and restore power.”

SCE did not indicate a time frame for any additional potential blackouts.

Local agencies have said they are prepared to assist residents if an outage occurs in their area.

Megan Person, Kern County spokeswoman, said Wednesday afternoon the county would have a response ready if power is shut off, though she did not elaborate on what it would include. She did say, however, it would not be nearly as big as the response following the July 4 and 5 Ridgecrest earthquakes.

Bakersfield Police Department spokesman Sgt. Nathan McCauley assured citizens that officers will still be able to respond to any emergency or crime-related calls.

“Our building has generators so we won’t lose service and we can still get 9-1-1 calls,” he said. “We work with the county and several agencies for emergency preparedness ... We’ve reached out and had officers placed on call.”

Bakersfield citizens, however, should not contact BPD with questions regarding possible outages, but rather reach out to PG&E, McCauley added.

Bakersfield city fire is also not expected to be impacted by potential power outages.

Hospitals in the area also have generators that will kick start if power goes out. Generators can provide power for four days at Dignity Health Memorial Hospital, explained Kenneth Keller, president and CEO. The hospital also has food and water stored to take care of staff members and patients for four days.

Kern High School District announced Wednesday that Stockdale and North high schools may specifically be impacted Thursday by a power outage. Both schools will be on a two-hour delayed start Thursday, and parents will be informed by 8 a.m. if the power is out and school is canceled for the day.

If the district and/or a school site determines it is necessary to release students for the day due to a power outage, an all-call notification will be sent to all parents, bus routes will be activated and nutrition services will provide a cold lunch for students who are on campus if the outage occurs during the lunch period, according to the district.

Bakersfield College announced Wednesday its various locations will not be affected and classes will continue as scheduled Thursday and Friday.

The National Weather Service in Hanford issued a high wind watch for the Kern County Mountains and desert areas from 8 a.m. until 11 p.m. Wednesday. It said to expect sustained winds of 30 to 40 mph, with gusts up 60 mph in those areas.

What to include in your emergency kit

PG&E, SCE may cut power to local areas due to wildfire risk

I live in N/E Bakersfield. There is no wind. 1/2 of my street is lit. 1/2 is not. Are we to believe that my house is in a crucial danger zone but 5 houses up the street the power is on and it is safe there? This is all complete BS.

Always was compulsive outback survivalist by nature & love it . . . then by mil training (& line experience). My 'mountain valley' ranch was "off grid" & did ok with gen, propane and solar (mine) for 50 years . . . while job commute 50+ mi. graded plowed road >> my tractor. Then new neighbor built uproad ranch and brought phone & line power up road (all underground) so trans remote phone to my stable, but still off grid (gen/sol/prop). Line power down >> no prob, like snow and rain time. Now, cell phone and solar prime w/prop. Navy SERE drill (Survival, Evasion, Resistance, Escape) . . . plan of the day . . . every day . . . (fires by others)

And, if the power stays off for several days as has been suggested, what's the plan for disposing of a city wide load of spoiled food? And the followup of a "run" on the markets to restock when the power comes back on? That, assuming those who have lost a fridge full of food have the money to make that "run." I'm not even going to touch the issues for people whose lives depend on power dependent medical equipment.


What technologies like say line separator rods are out there to make this sort of things necessary? If my project doesn't get stopped by some as yet not found problem by this time next year a solar array with battery backup to keep at least limited power will address those issues. For us. Not so sure about the community at large but lengthy deliberate power outages without a plan doesn't look like a good idea.

Agree 100% Stephen. I know a few people on CPAP machines- what are they supposed to do??

I suggest someone organize a protest, during which a large amount of people agree to VOLUNTARILY shut off their breaker boxes for a 24-hour period. Hit them in the money purse.

My kid goes to bc and his professor didn’t care if we had power or not. Shame on them.

PG&E and the CPUC have created this 3rd-world-type mess. PG&E for decades collected monies in their rates to maintain the transmission lines, but failed to do so. The CPUC and the DRA failed to protect ratepayers who’ve paid untold tens of millions for line maintenance, to be told what - expect power outages because of gusty winds. All 3 mentioned will hide behind global warming, cooling, or the end-all be-all climate change as to why power shut offs are necessary, prudent, and reasonable actions to undertake. News flash - It’s called weather. Deal with it responsibly by keeping transmission paths cleared with the 10’s of millions paid by ratepayers for maintenance, but went to pay dividends to stockholders. PG&E, the CPUC, and our State government have failed miserably. To add salt to the wound PG&E will likely seek a rate hike to cover costs of under-collecting their costs during wind-induced power outages, and the CPUC will likely “regrettably” approve their requests.