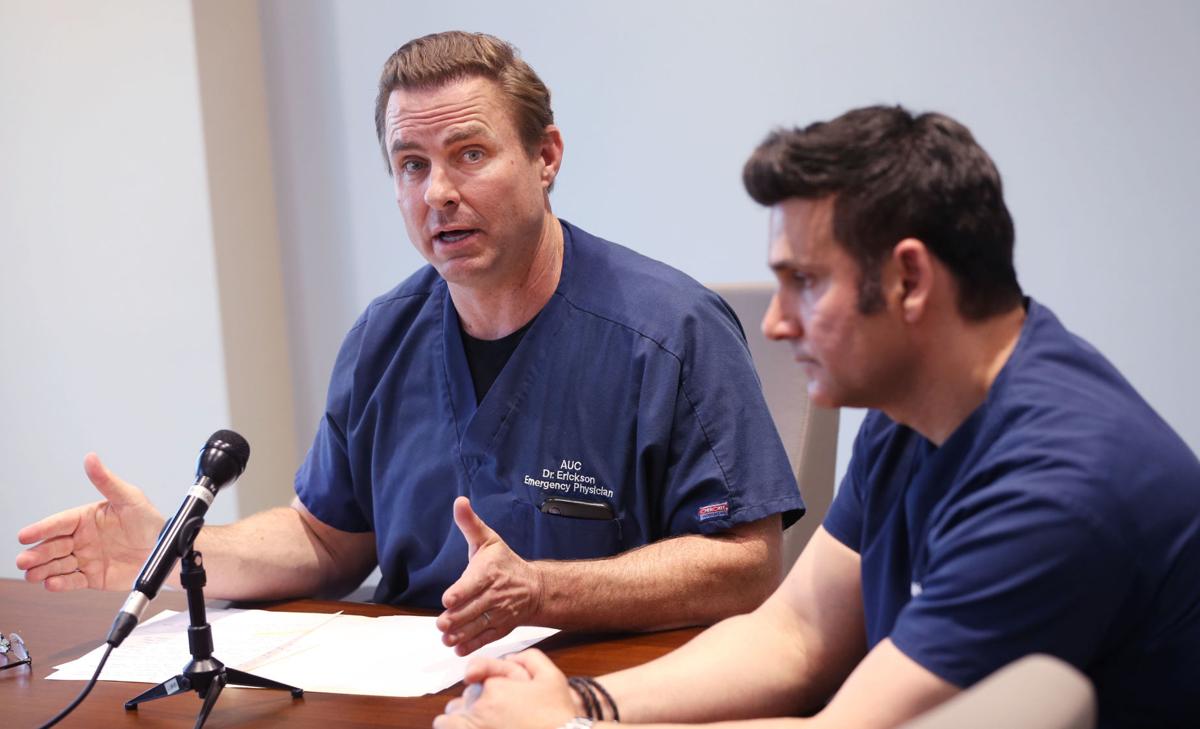 Dr. Dan Erickson and Dr. Artin Massihi from Accelerated Urgent Care held a news conference April 22 at their Coffee Road facility to talk about coronavirus trends and the impact on the economy. 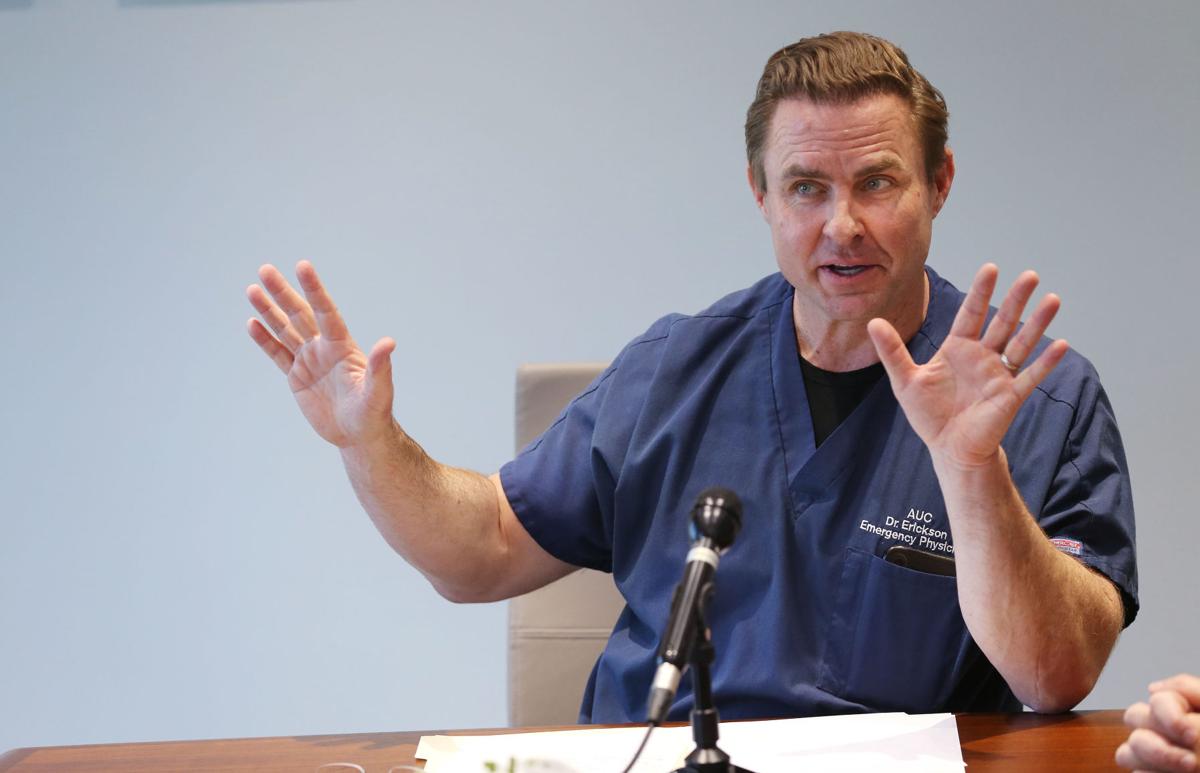 Dan Erickson, a former emergency room physician who co-owns Accelerated Urgent Care in Bakersfield held a news conference at his Coffee Road facility to talk about data available on coronavirus and how he feels it is similar to flu.

Dr. Dan Erickson and Dr. Artin Massihi from Accelerated Urgent Care held a news conference April 22 at their Coffee Road facility to talk about coronavirus trends and the impact on the economy.

Dan Erickson, a former emergency room physician who co-owns Accelerated Urgent Care in Bakersfield held a news conference at his Coffee Road facility to talk about data available on coronavirus and how he feels it is similar to flu.

Before COVID-19 was even detected in the United States, Dan Erickson, a former emergency room physician who now co-owns Accelerated Urgent Care in Bakersfield, bought as many tests for the virus as he could. He knew it would be here eventually and wanted to be ready to test those who needed and wanted it.

Now, after testing thousands of people, he and his business partner, physician Artin Massihi, say they have enough data to draw some conclusions about COVID-19.

Their message: COVID-19 is more ubiquitous and less deadly than we think. It's similar to influenza and we should therefore reopen society and stop treating the situation like the lethal menace it was initially thought to be.

"Two months ago we didn't know this so I'm bringing it to light now," Erickson said Wednesday at a news conference held at his Coffee Road urgent care.

"This is a many-headed hydra. It’s really unfortunate to boil this all down to it’s just flu," said Andrew Noymer, associate professor of public health at UC Irvine. "There’s no flu season that looks anything like New York does right now."

Accelerated urgent care has done 5,213 COVID-19 tests at its five Bakersfield locations, Erickson said — which is more than half the 9,197 tests done so far in Kern County. Of those, 340 were positive, according to Erickson.

If that percentage of positive cases were assumed to represent the entire population of Kern County, which is roughly 900,000, it would mean about 58,000 people in Kern have had the virus, far more than the nearly 700 official confirmed, Erickson said.

That many cases would "indicate there is a widespread (COVID-19) infection, similar to flu," Erickson said.

And if we don't shutdown the country for flu, should we keep doing it for coronavirus?

"It’s about looking at trends and saying we’re not seeing what they've been talking about for the past six to eight weeks," said Massihi, referring to predictions that up to 100,000 Americans could die of the virus and hospitals would become swamped with patients. "We’ve crippled the economy. There’s a lot of domestic issues going on. Is social isolation warranted for the healthy?"

Using the same calculation, Erickson estimates 12 percent of the population statewide, or some 4.7 million Californians, have already had COVID-19. With about 1,400 deaths so far in California, that puts the statewide death rate at about .03 percent, he said.

The secondary effects of the shutdown are considerable, too, he said. They include a dramatic decrease in volumes at hospitals and even Erickson's urgent care practice, where staff are mostly testing patients for COVID-19 these days.

The Californian has reported that hospital volumes are significantly decreased in recent weeks as elective surgeries have been canceled and many people are staying home for fear of contracting COVID-19, which is in turn causing financial strain for healthcare facilities. Erickson wondered what could happen when the economy reopens and people begin flooding into hospitals that have reduced their staffs.

He said local leaders and colleagues of his here and across the country are reporting increased incidents of child molestation and domestic violence while people are at home, and suicides are also spiking. He also noted a contradiction between allowing people to shop at Costco and Home Depot but not allowing them to go to church.

Noymer of UC Irvine disagreed with the doctors' premise that COVID-19 is as widespread as Erickson and Massihi think, saying the idea that nearly 5 million Californians have had the virus is a gross overestimate. The people tested in California were not a random sample; they were mostly people who were symptomatic, Noymer said. Therefore, extrapolating the positive test rate across the entire population of the state is not an accurate way to arrive at how widespread the virus is.

And even if 12 percent of the state has had the virus, that still leaves 88 percent vulnerable to it, Noymer said.

But people will have different ideas on how to balance the economic costs of trying to stem the pandemic.

"Like many other things in society, we’re going to have to come to a consensus about how we allocate resources," Noymer said.

Corson said she disagreed with any assertion that we should abandon social distancing and stay-at-home orders. The county continues to adhere to Gov. Gavin Newsom's orders in order to mitigate illness and deaths from the virus and the impact it could have on the local healthcare systems, she said.

"We completely understand how eager everyone is to get back to our lives, but right now protecting our health is our number one priority and this is not the time to let up," Corson said. "I want to strongly reiterate this is the time to stay vigilant and stay at home and practice social distancing."

As hundreds of new COVID-19 cases were being reported daily and Bakersfield hospitals were filling to capacity two weeks ago, two local doctor…