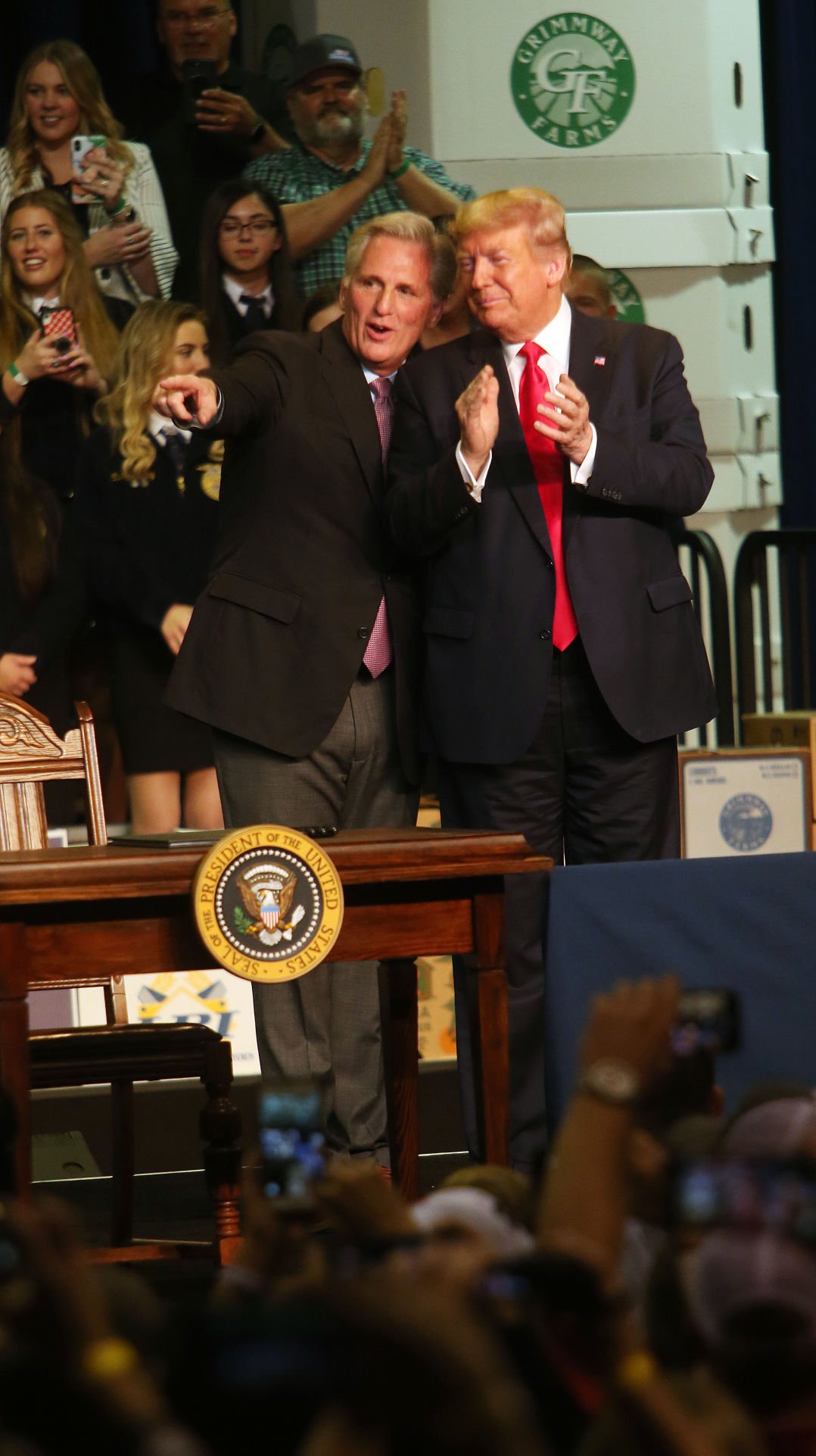 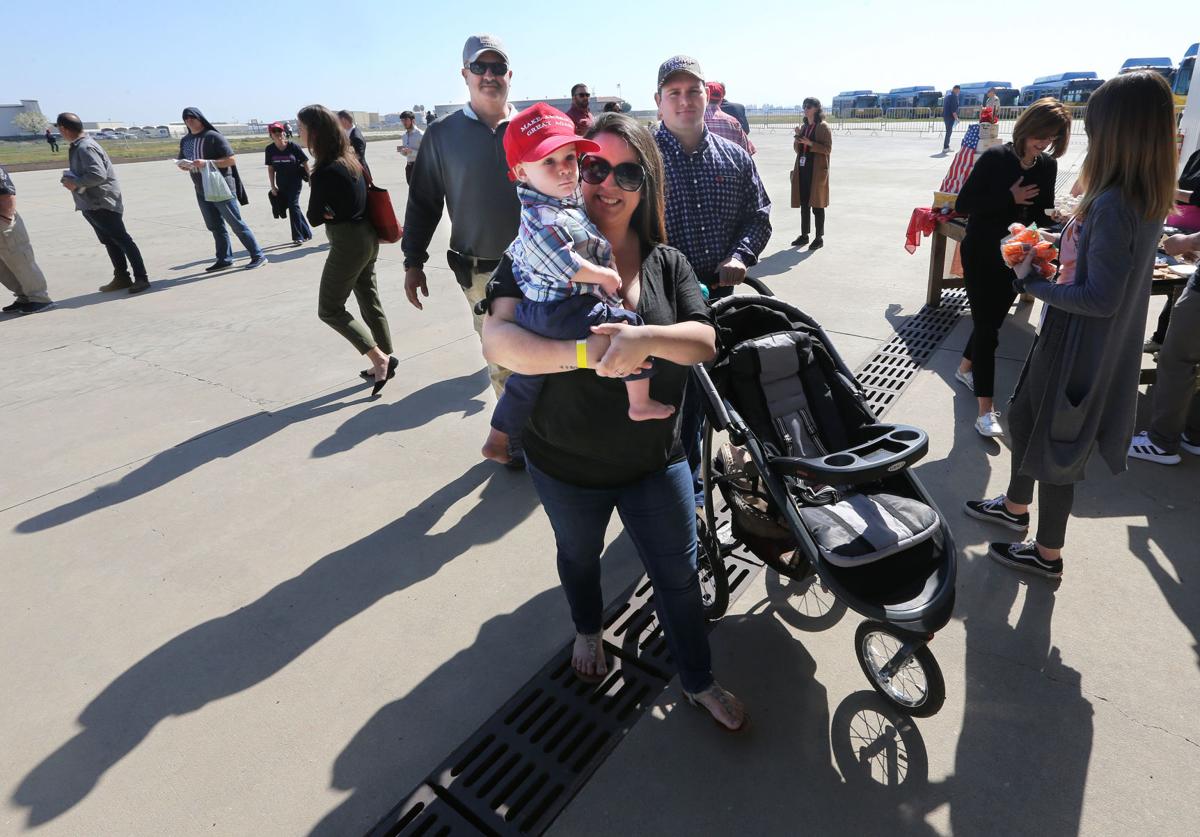 One day the president drops by, two days later it's the leading Democratic candidate for the White House. Could it be that winning Bakersfield is suddenly key to becoming leader of the free world?

Political observers say Vermont Sen. Bernie Sanders and President Donald Trump are looking to Kern County for entirely different reasons: Sanders hopes to energize young Latinos and pick up every last delegate, they say, while Trump dropped by to help an important ally in a part of the state where he feels welcome.

Their dual visits this week — Trump drew a local crowd of 3,000 Wednesday and Sanders is expected to speak from 3:30 to 5:30 p.m. Friday at the Spectrum Amphitheatre — have showered rare attention to a city not used to being in the political spotlight.

There is a sense that both stops are geared toward seizing overlooked political capital, especially for Sanders. Even so, the strategies involved appear to be more subtle than that.

In 2016's presidential election, Trump did better in Kern County than he did in California as a whole. But also, Rep. Kevin McCarthy, R-Bakersfield, has proved himself a strong ally of the president, noted Ivy Cargile, assistant professor of political science at Cal State Bakersfield.

"We could see (Trump's visit) as a thank-you" from the president to McCarthy, said Cargile.

She added that "of course" Wednesday's political rally was intended to benefit the election prospects of former three-term Rep. David Valadao, R-Hanford, who narrowly lost reelection in 2018 to Rep. T.J. Cox, D-Fresno.

Even so, Trump's success with flying in to back candidates in need of support has been mixed, said Palmdale political consultant Paul Scott, owner of Long Shot Political Consulting.

"His effectiveness is kind of hit and miss, which I think emboldens the Democrats," Scott said.

Christian Grose, a political scientist at the University of Southern California, said Bakersfield is a natural destination for the president because the city's "a little bit more hospitable to Trump" than California is overall.

He pointed to new poll results from the USC Price-Schwarzenegger Institute, of which Grose is academic director, showing Trump's support statewide is about 30 percent. The president's support in the Central Valley is stronger, he said, but still less than 50 percent.

Sanders, on the other hand, is coming to Bakersfield partly because the city and the Central Valley generally have been overlooked by state and national political campaigns, said the California communications director for his presidential campaign, Anna Bahr.

Another reason is that the senator has focused on building support among young people of color, especially Latinos, as well as working people, she said.

There's some truth, she said, to the assertion that Sanders is trying to pick up political delegates outside more heavily populated areas like Los Angeles and San Francisco.

"If you only are visiting the big urban areas of the state … you are leaving delegates on the table," she said. But, she added, "more importantly, there are voters there who deserve to be engaged, energized and heard from."

Cargile said the Central Valley fits well with Sanders' focus on young people of color. She said one lesson learned from the 1960s and former President Barack Obama's campaigns was that if you mobilize communities that have traditionally been under-mobilized, "they will show up to the polls for you."

Scott, who characterized Bakersfield as a "toss-up area," politically speaking, said Sanders has done well to focus on registering voters in the area.

In January Sanders opened a Bakersfield office — one of 22 in the state, many of them in often-overlooked areas such as the Inland Empire. He also visited Delano in May of 2016, advocating support for farmworkers, improvements to drinking water quality and limiting exposure to pesticides.

Scott asserted that Sanders' focus on energizing young people and persuading them to vote could be effective.

"It's just going to be a matter of who can register voters and who can get those voters out on election day," he said.

Results of the USC Price-Schwarzenegger Institute poll, based on surveys Feb. 1-15 of 1,200 California likely voters, show that Sanders led all of Democratic candidates with 29.2 percent, followed by former Vice President Joe Biden with 21.4 percent and Massachusetts Sen. Elizabeth Warren with 20.2 percent.

The poll found that, in the Central Valley, Sanders' enjoyed 30.7 percent support. Biden placed second with 23.2 percent and Warren took third with 21.2 percent.