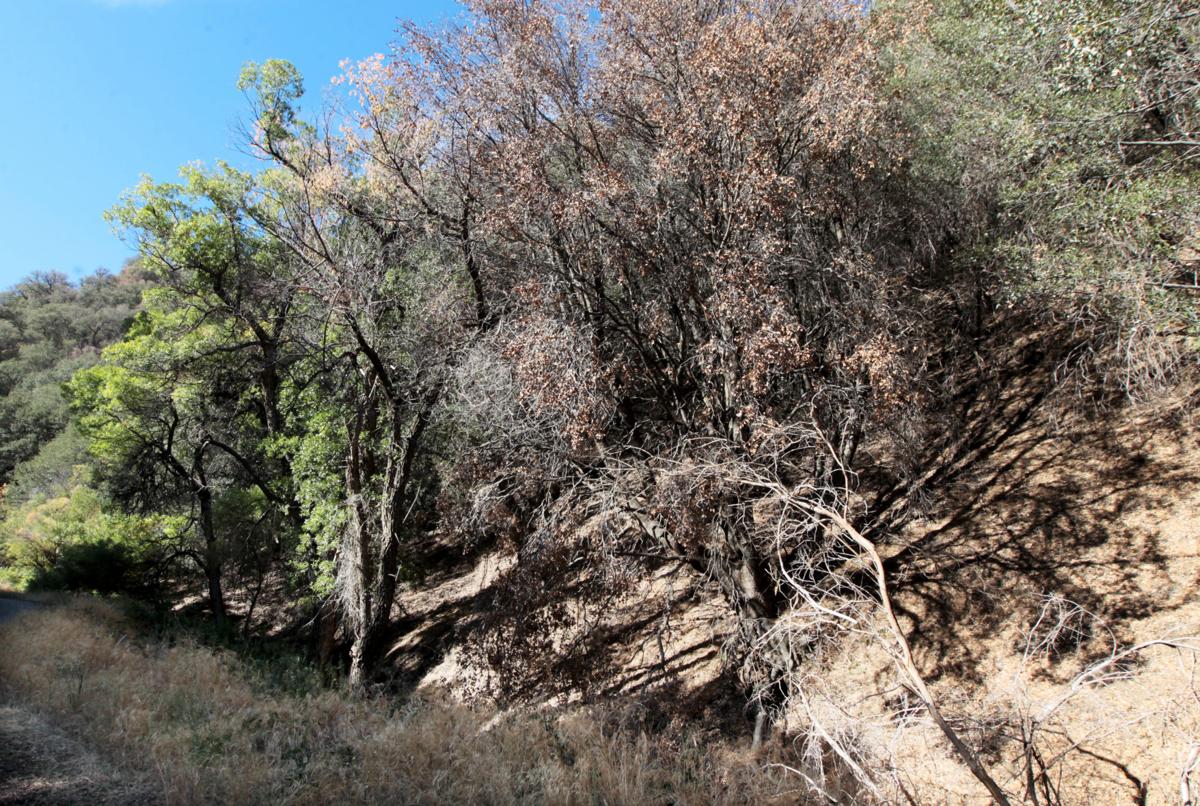 Many of the trees are turning brown and losing leaves including several of these in the Tehachapi Mountain Park area. 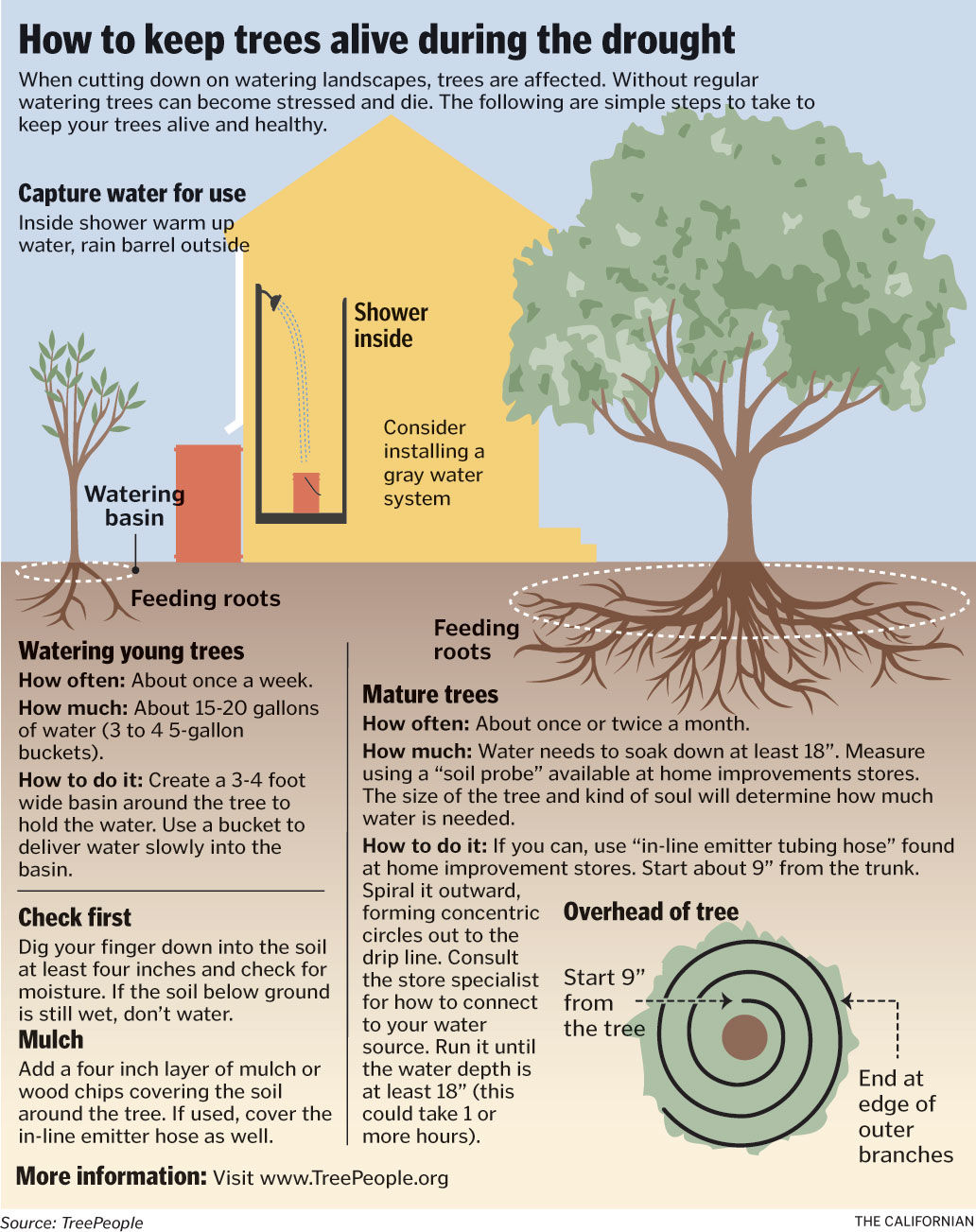 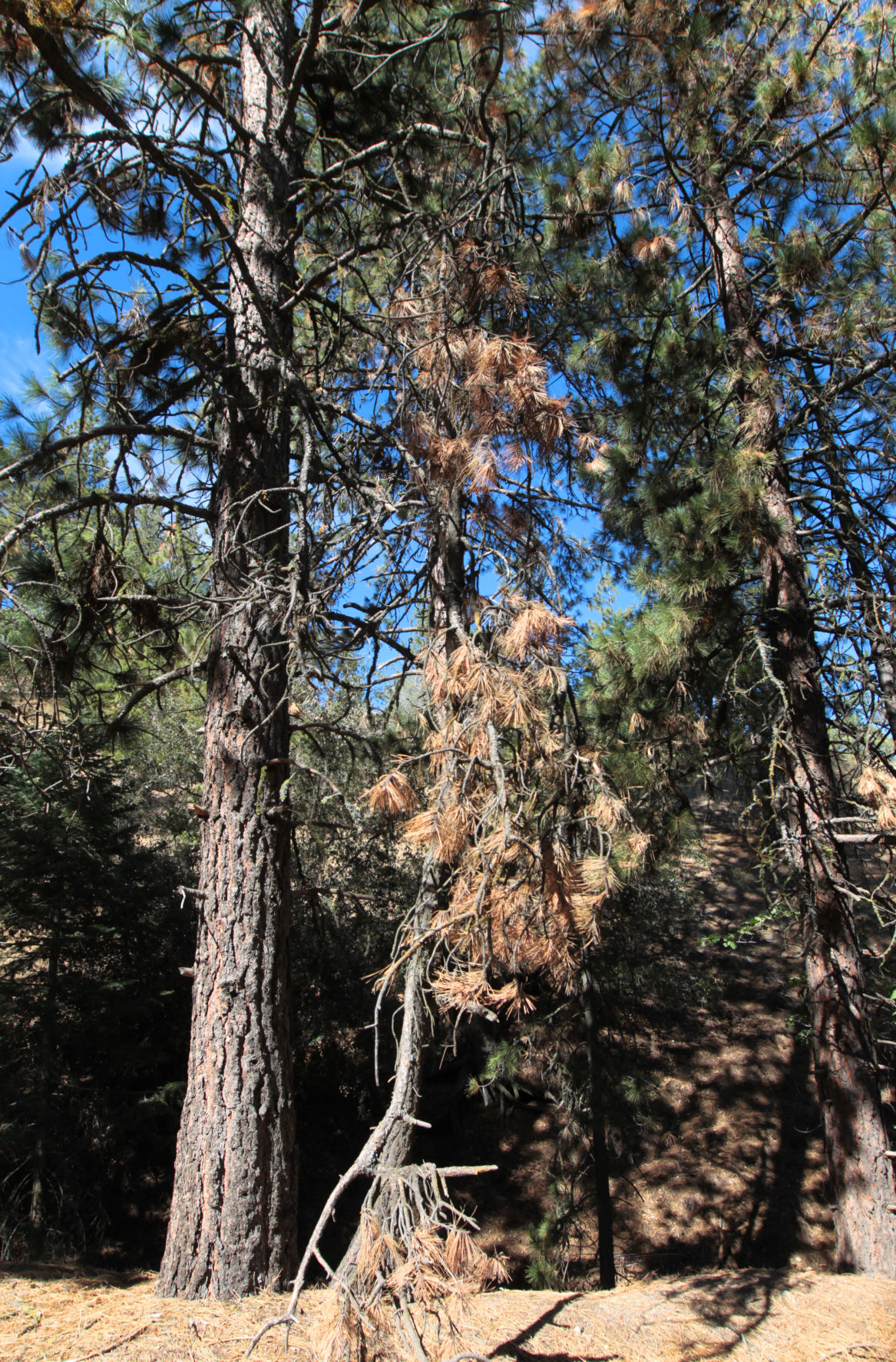 Some of the trees in Tehachapi Mountain Park are dying. 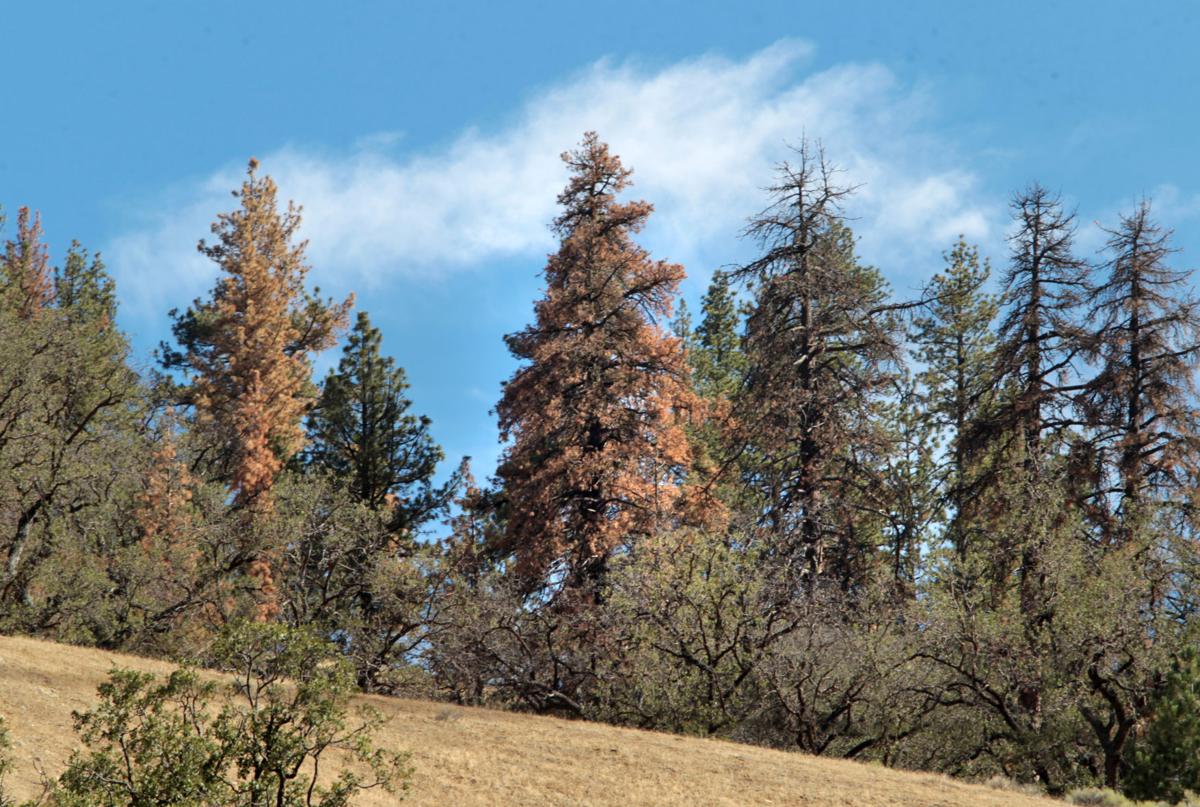 Some of the trees on the hillsides in Tehachapi Mountain Park are turning brown.

Many of the trees are turning brown and losing leaves including several of these in the Tehachapi Mountain Park area.

Some of the trees in Tehachapi Mountain Park are dying.

Some of the trees on the hillsides in Tehachapi Mountain Park are turning brown.

California’s punishing drought is taking a toll on our trees, both due to the natural lack of water and people just not knowing how to take care of them.

While Mother Nature will need to step in to fix the first problem, there are things people can and should do now to address the second, experts say.

What they’re seeing in urban Bakersfield is not a lot of dead trees but a general weakening of trees that makes them susceptible to disease and insects.

“And when that starts happening,” said Eric White, in charge of business development at White Forest Nursery, “that’s when they die.”

One of the problems is that people have long watered their trees with their sprinklers — and not very deeply — leading to the development of shallow roots.

This year they’ve turned off those sprinklers — or at least cut back on their use — to comply with mandates to conserve water by upwards of 32 to 36 percent.

When the roots are shallow and people cut back on watering, “it really stresses trees out,” White said.

This isn’t just a concern among tree experts. One of the state’s top water regulators has been pleading with reporters to write stories about how to save trees.

"It would just be tragic to lose trees as an unintended consequence" of the mandates, Felicia Marcus, chair of the State Water Resources Control Board, told The Californian.

The good news, tree experts say, is that there are things people can do now to protect their trees. And they should do it now, White said, or “you will see a huge increase in trees being damaged, infested with pests and dying come spring and summer of next year.”

First, the signs of tree stress.

The typical, drought- or no-drought sign of a tree short on water is leaves turning brown from the tip in, White said. When there’s a more systemic problem, he said, the leaves curl and turn yellow.

Signs of insect infestation differ from tree to tree, White said. You can check the leaves, he said, but an infestation won’t always be obvious. Look for the death of limbs, he said.

If you think there’s a problem, White said, there probably is.

If you’re concerned, get your tree diagnosed by a professional, said local arborist Michael Monji. To check on a tree, he suggested a soil compaction test using a soil probe and a Shigometer to test the sap flow inside the tree to determine how healthy it is.

“You can save your trees if you take the proper steps to keep them healthy in most cases,” Monji said.

When it comes to watering, Monji said, a common mistake people make is forcing their landscape to “run a sprint instead of a marathon.” By that he means watering once or twice a day without forcing water to go deep.

All the experts encouraged people to put mulch around the base of their trees, but not let it touch the trunk.

The cost of taking care of a tree is a lot less than that of ripping it out, especially a large one, White said.

Meanwhile, city and county parks officials are also fighting to save trees. They’ve got quite a fight on their hands.

The Bakersfield Recreation and Parks Department maintains 59 parks and 160 miles of streetscape, according to Director Dianne Hoover. It’s battling an increase in the number of dead or dying trees there, most commonly non-native and non-drought tolerant varietals such as Coastal Redwood, Liquidamber, Flowering Plum, and White Alder.

Since the beginning of the year, Hoover said, approximately 900 dead trees have been removed citywide. She said staffers have identified an additional 1,000 trees believed to be impacted by the drought and may need to be removed in coming months, pending further evaluation.

“These figures represent approximately 2.2 percent of the total tree population that the city maintains,” Hoover said.

The city is evaluating different drought-tolerant replacement options for the areas where trees were removed.

“(Tree deaths) haven’t become a problem yet, but I have been by some places where the trees are starting to stress, no question,” Lerude said.

You can tell, he said, by the early loss of leaves. He’s told staff to turn up the water in some areas.

But that won’t work everywhere.

There’s no irrigation at Tehachapi Mountain Park, where a huge bark beetle infestation exacerbated by the drought has killed a lot of pine trees. He couldn’t put a number to it, but said it’s “a lot.”

The department had a timber harvester take down a lot of dead trees and some healthy ones that were competing for water, “but we’ve still lost a lot of pines up there over the last eight years of the drought,” Lerude said.

As for California’s forests, it was estimated this past spring that they’ve lost 12 to 13 million trees in the past year due to the drought, said Glenn Barley, regional resource manager for the California Department of Forestry and Fire Protection.

That includes Oaks along Highway 58 toward Tehachapi and to a much greater degree, pines in the Sierra from Tehachapi up to Tuolumne and Calaveres counties.

The drought has made the pines more susceptible to the bark beetle, which chew under bark, lay eggs and end up interfering with the system that moves water up into branches and nutrients into the root system.

And there’s little forest officials can do on a landscape level to combat it. Mother Nature is going to have to help out, Barley said.

“It will take a couple years of normal to above-normal precipitation to bring things back,” he said.

There’s one thing individuals can do for the forest, Barley said: Remove dead trees near houses to reduce their “significant” fire threat.

He said they can talk out their options with the California Department of Forestry or Kern County Fire Department, though financial help is not available.