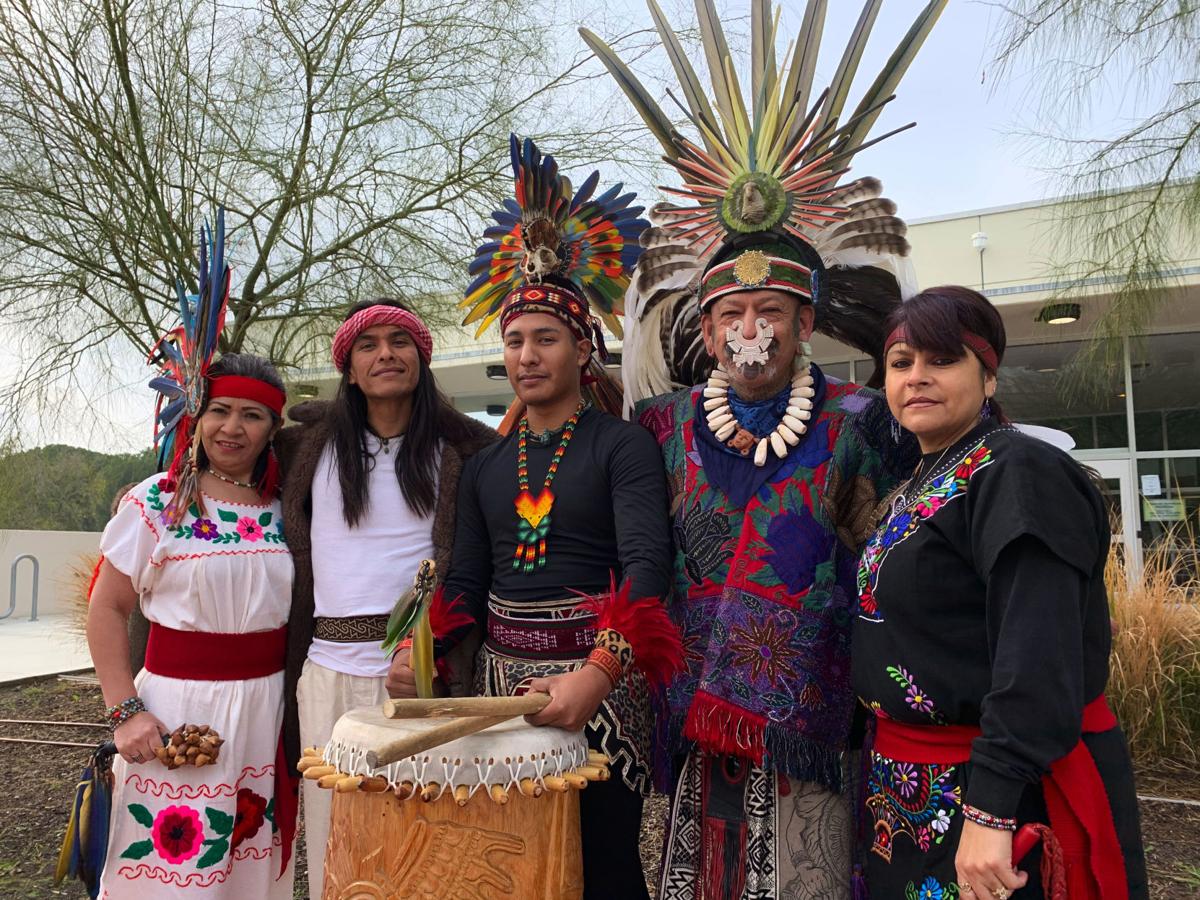 Members of Calpulli Teopan Tecuantitlan, or Family of the Temple of the Jaguar, from left, Ana Romero-Ollin, River Thomas Galindo, Jael Rivera, Xico Xavier Garza and Leticia Espinoza, stand for a photo on the Bakersfield College campus in December. 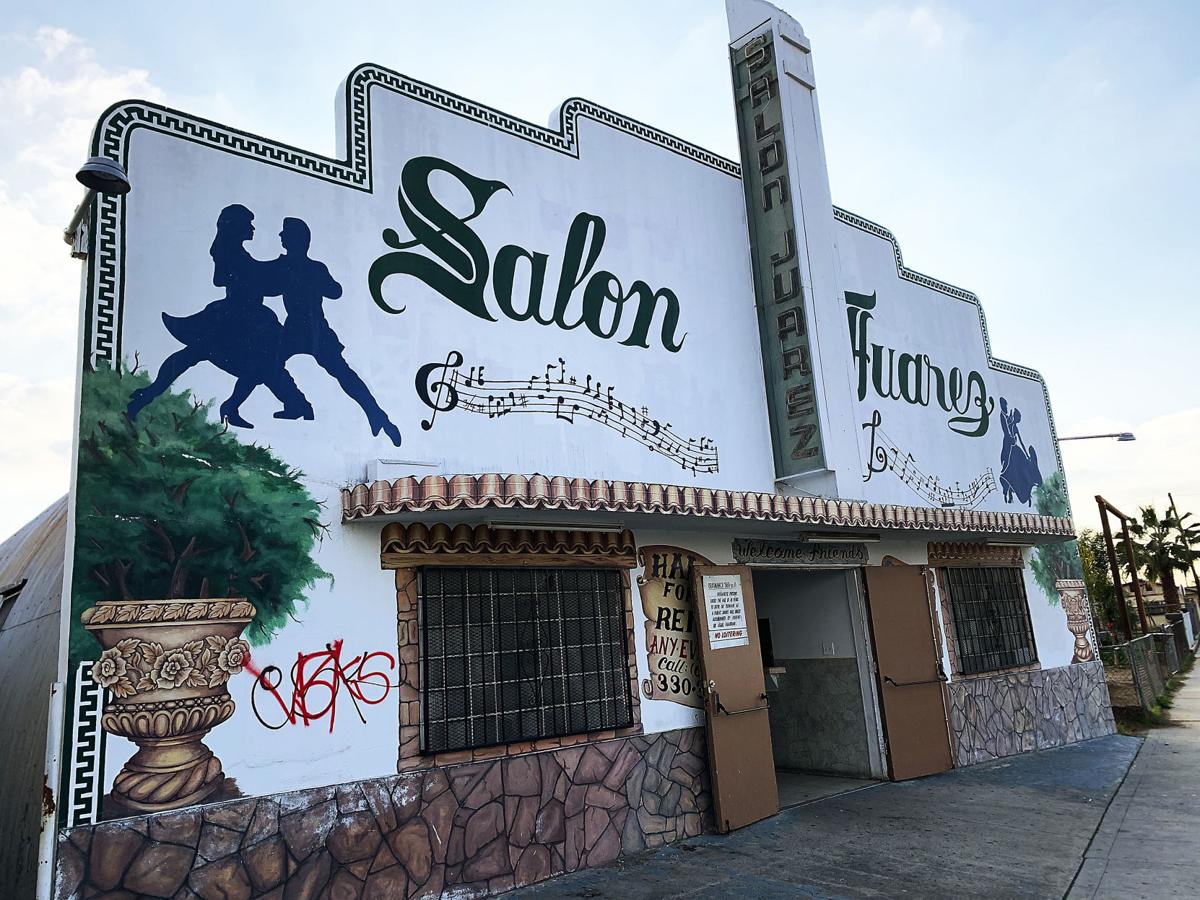 Local groups hope to turn the lights back on at Salon Juarez and bring more cultural opportunities to this east Bakersfield neighborhood.

Members of Calpulli Teopan Tecuantitlan, or Family of the Temple of the Jaguar, from left, Ana Romero-Ollin, River Thomas Galindo, Jael Rivera, Xico Xavier Garza and Leticia Espinoza, stand for a photo on the Bakersfield College campus in December.

Local groups hope to turn the lights back on at Salon Juarez and bring more cultural opportunities to this east Bakersfield neighborhood.

Jael Rivera says that when he performs the traditional dances of Mexico, he enters almost a meditative state.

“These dances are a form of learning the stories of our people, of the native people through the steps and it’s a form of healing,” Rivera said. “It’s just like meditation except we’re moving around.”

The 21-year-old Bakersfield native runs a traditional Mexica dance group that hopes to bring native culture to many in the area. The group, Calpulli Teopan Tecuantitlan, which means Family of the Temple of the Jaguar, has recently experienced a surge in interest. And by securing a practice space in a historic Bakersfield building, the group has joined an effort to revitalize one of the city’s oldest Hispanic neighborhoods.

The group practices in Salon Juarez, a venue on East 18th Street built by Sociedad Juarez Mutualista Mexicana, the city’s first Mexican mutual aid society. Although Salon Juarez was built after World War II, a building that serves as the meeting place for the society dates back to 1910, when the society was founded.

Initially, mutual aid societies functioned as assistance networks for Mexican immigrants. If a family member died, the society could provide funds or if someone became sick, assistance could be offered.

But now, with modern insurance open to people of all races, interest has fallen for the society, even as it remains in the city.

“As of right now, the society is kind of under the radar. People have either forgotten about it or the younger generation haven’t really taken into it,” said Bakersfield College history Professor Javier Llamas. “That’s why we’re trying to bring it back.”

Salon Juarez has a neon marquee that needs to be restored, and the building in general could be modernized. Llamas said he wanted to bring more cultural opportunities to the residents of the neighborhood, which used to be a major center for Mexican immigrants before they were allowed to integrate with the rest of society.

Llamas said he hopes to host cultural events in the venue throughout the year and secure a historical designation for the society’s old meeting place.

“This place probably has a lot of spirits of American historical integrity,” said Xico Garza, a member of the dance group.

He said he has enjoyed the increase in interest the group has experienced recently. Since practicing at Salon Juarez, the group has grown to around 10 members. They accept members from all ethnicities and say they hope to promote inclusivity and pride in heritage among their members.

“The circle brings so many opportunities that people don’t even realize,” said Adriana Zamora, another group member.

The group dances several times a year in formal events, even traveling outside Bakersfield. Recently, members of the group danced at “Dear America: A Social Justice Conversation,” which featured two NFL players at Bakersfield College in early December.

Rivera, who is studying communications at BC, said he hopes to stay in Bakersfield after he graduates and grow the group.

“We don’t plan to be the biggest group here. We plan to inspire others to try to start their own thing as well. Because every tradition is beautiful depending on how they do it,” he said. “We just plan to inspire anyone to show their pride in their lineage.”