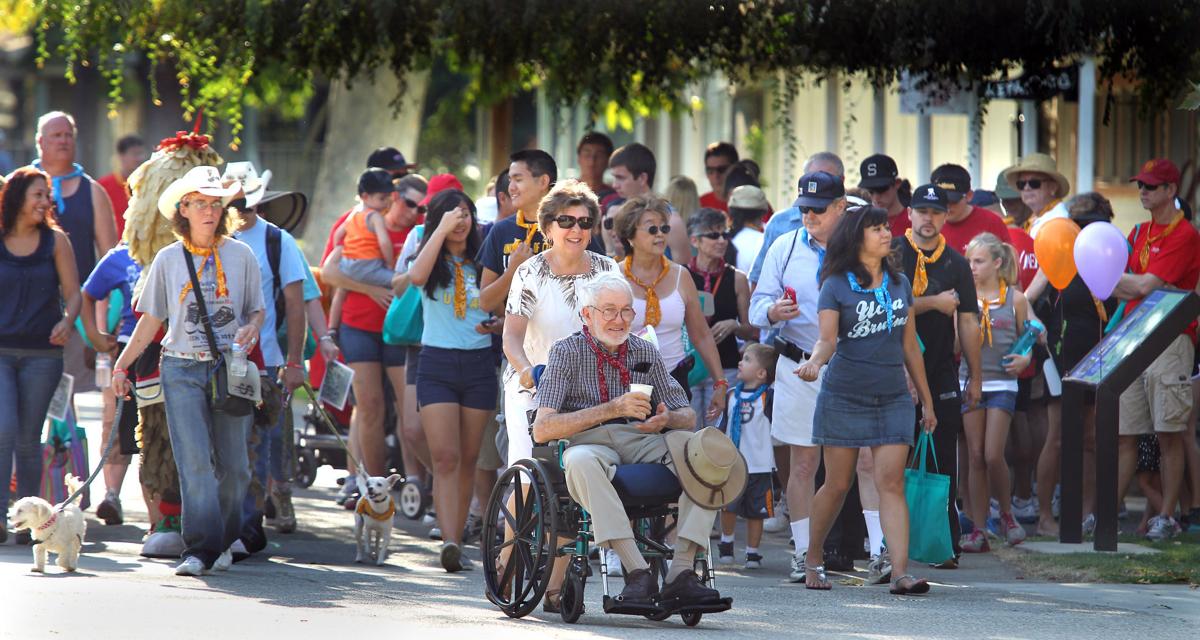 In this file photo, Dr. Tom Larwood, who recently died, and his wife, Pauline Larwood, lead the way during one of the Valley Fever Awareness walks held at the Kern County Museum. 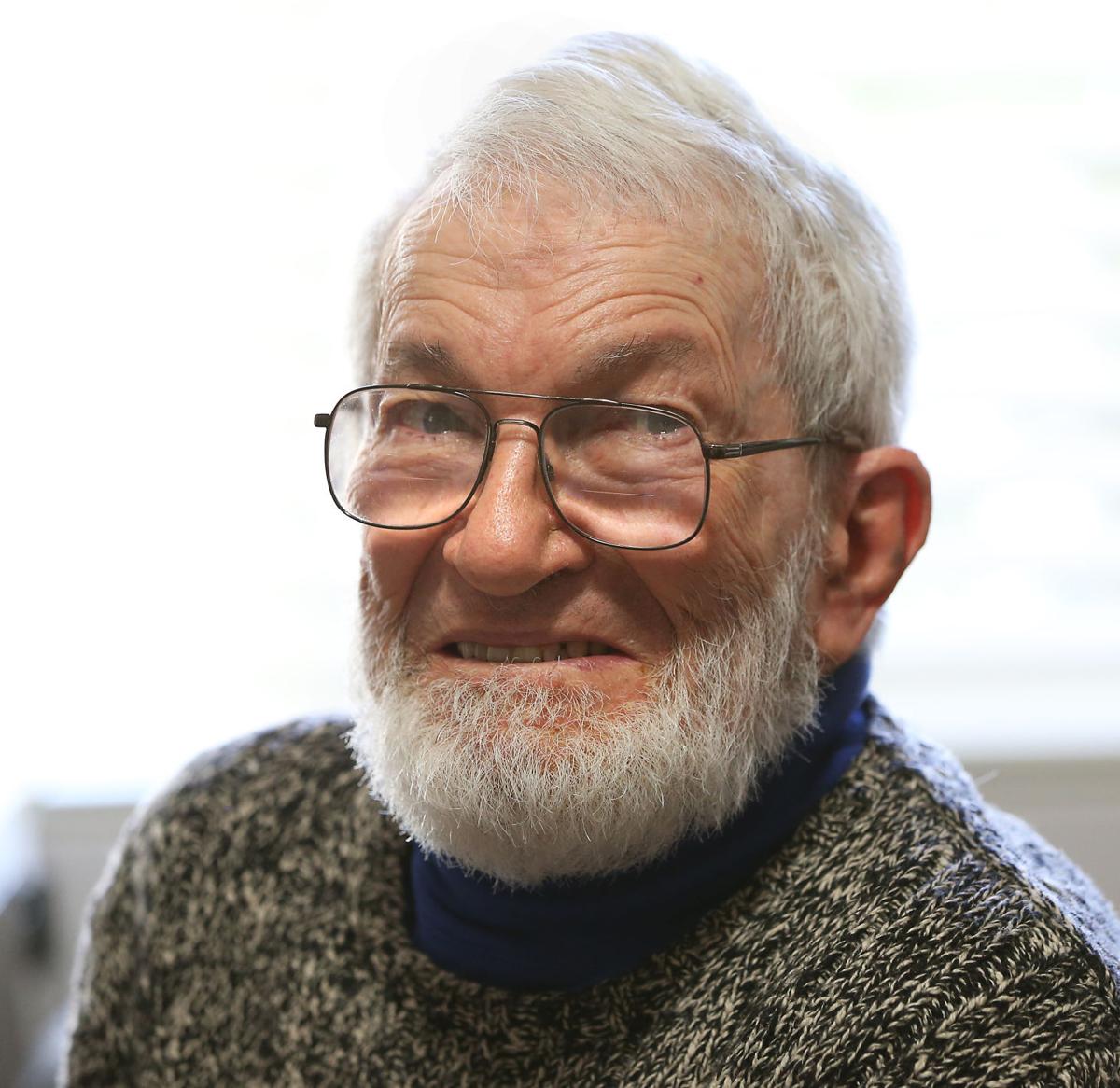 When Tom Larwood, 90, retired from his internal medicine practice, he volunteered in the local history room at Beale Memorial Library.

In this file photo, Dr. Tom Larwood, who recently died, and his wife, Pauline Larwood, lead the way during one of the Valley Fever Awareness walks held at the Kern County Museum.

When Tom Larwood, 90, retired from his internal medicine practice, he volunteered in the local history room at Beale Memorial Library.

He was probably best known for his pioneering efforts to develop a vaccine or a cure for the disease known as valley fever. But to family and friends, longtime Bakersfield physician Tom Larwood was something of a Renaissance man who was interested in and fascinated by almost everything. Especially science and people.

Larwood died Tuesday, his wife, Pauline, by his side, at Bakersfield Memorial Hospital, an institution where he spent many years caring for patients.

Despite his advanced age and the blindness that affected him later in life, Larwood was such an optimist, said his stepson Mike Wracher, that his passing still came as a shock.

But the family’s profound loss was eased, Wracher said, by the knowledge that Larwood lived the life he chose, a life of accomplishment and community service, grounded by church and family, and fueled by an insatiable interest in the world around him and a desire to help the people he met along the way.

“He did not want to become obsolete,” said Pauline, who married Larwood in 1972, the second marriage for both.

But he never faded away.

Larwood’s volunteer work alone was a testament to his priorities. He worked with the American Heart Association, the American Lung Association, Boy Scouts, Friendship Force, Bethany Homeless Center, the Bakersfield Symphony board, the United Way, and in the Beale Library’s local history room.

“The thing that amazed us most,” said longtime family friend Sandra Larson, who served several years as executive director of the Valley Fever Americas Foundation, was “his positive attitude that didn’t seem to be affected by difficulties that would have floored the rest of us.”

Indeed, in 1954, Larwood went to South Korea as a medical missionary. During that trip he and his son David contracted polio. Barely a year later the polio vaccine would become widely available.

His illness would affect him for the rest of his life, especially during the past decade when he lost his eyesight and mobility. But it never seemed able to change his outlook.

“We never had to cheer him up,” Larson said. “Even in the last years, we saw a sparkling personality, not a man blind and in a wheelchair.”

Born on Halloween in 1925, Larwood’s spiritual roots were apparent early in life. His maternal grandfather was a Methodist minister in Iowa, his mother a church organist and choir director.

In the ninth grade Larwood decided to become an aeronautical engineer, he recalled in a short bio he wrote later in life with Dr. Portia Choi.

While still a freshman at Fresno State, Larwood started feeling doubtful about spending the rest of his life with numbers.

“So I talked to my dad about it,” he recalled. “He, a civil engineer and later a teacher, was not given to telling me what to do but rather would ask questions to help me find my own answers.

“He asked me what I was most interested in,” Larwood remembered. “I thought a bit, then replied, ‘Science and people.’ Then he wondered what that might add up to.

“The thought of my going into medicine had never seriously crossed my mind, but it seemed to fit. The idea stuck and I became a pre-med student, never to look back.”

After two years in college, he was drafted in 1944 and spent two years in the Navy Hospital Corps, an experience, he said, that would ultimately make him a better doctor.

Following his last year of pre-med at UC Berkeley, he attended the USC School of Medicine. At a Methodist youth work camp he attended in Mexico the following summer, he walked the countryside with two Mexican nurses giving smallpox vaccinations.

Besides seeing marked improvement in his Spanish, Larwood learned one of his most important life lessons:

“You do things with people, not for them,” he wrote.

After a one-year internship at Los Angeles County Hospital, Larwood arrived in Bakersfield in 1952 for a year of general practice residency at Kern General Hospital, now Kern Medical Center.

The fateful and eventful trip to South Korea followed.

Larwood returned to Bakersfield in the mid-1950s, well enough to begin a career in medicine that would last decades. A long association with Dr. Hans Einstein, another pioneer in local valley fever research, would lead to progress against the illness, formally known as coccidioidomycosis. But breakthroughs in finding a vaccine would prove to be elusive.

For years he would stay involved with a group of medical professionals, valley fever patients and advocates, drug company representatives and others who shared stories and knowledge about the disease.

For two decades, Tom and Pauline Larwood worked with the nonprofit Valley Fever Americas Foundation, Tom as a medical advisor, Pauline as a board member.

Despite his many accomplishments, Larwood may be remembered by those who knew him best as someone who could make deep and lasting connections with people.

He simply didn’t see divisions by color or race, by wealth or age, said his son David Larwood.

“He was an egalitarian,” David said. “To him, people are people.”

There was an inherent kindness, a genuine interest in others, and it was apparent to children and adults alike.

“Everyone wanted him to be their uncle,” David said.

Against the backdrop of an epidemic in Kern County, The Valley Fever for Americas Foundation is hosting a fundraiser Wednesday to drum up fund…