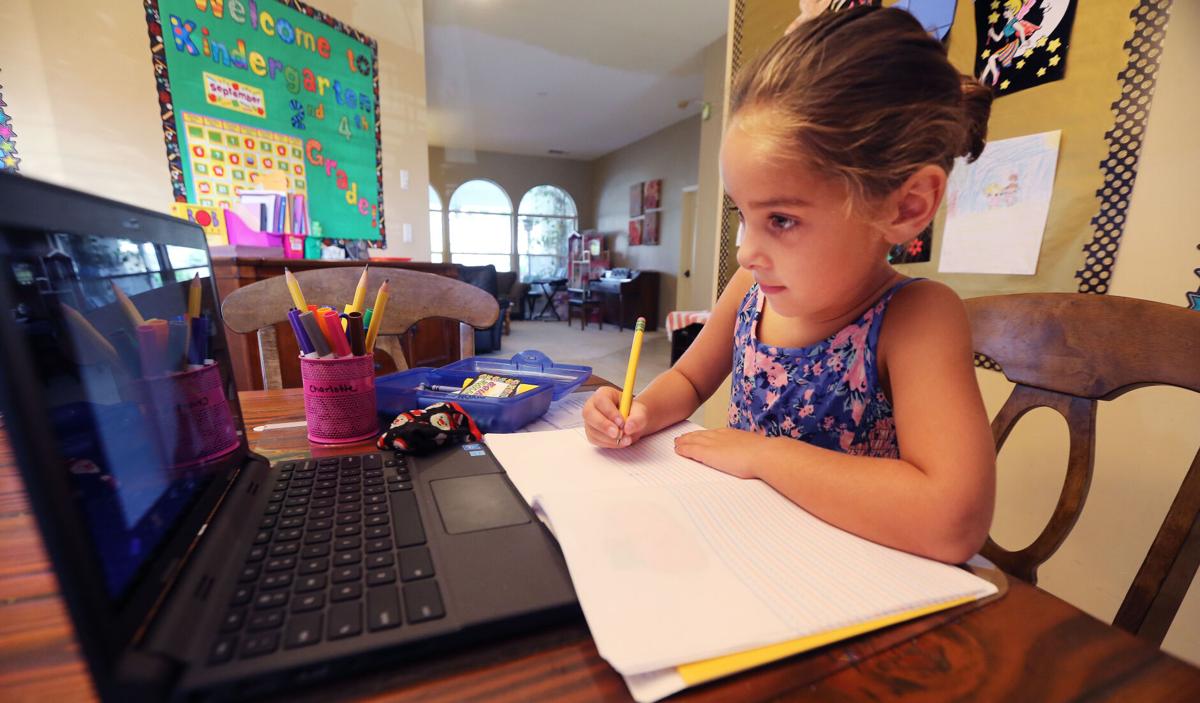 From her family's dining room, kindergarten student Charlotte Gurrola works on a journal assignment from her teacher Kellee Maitia at Almondale Elementary School. 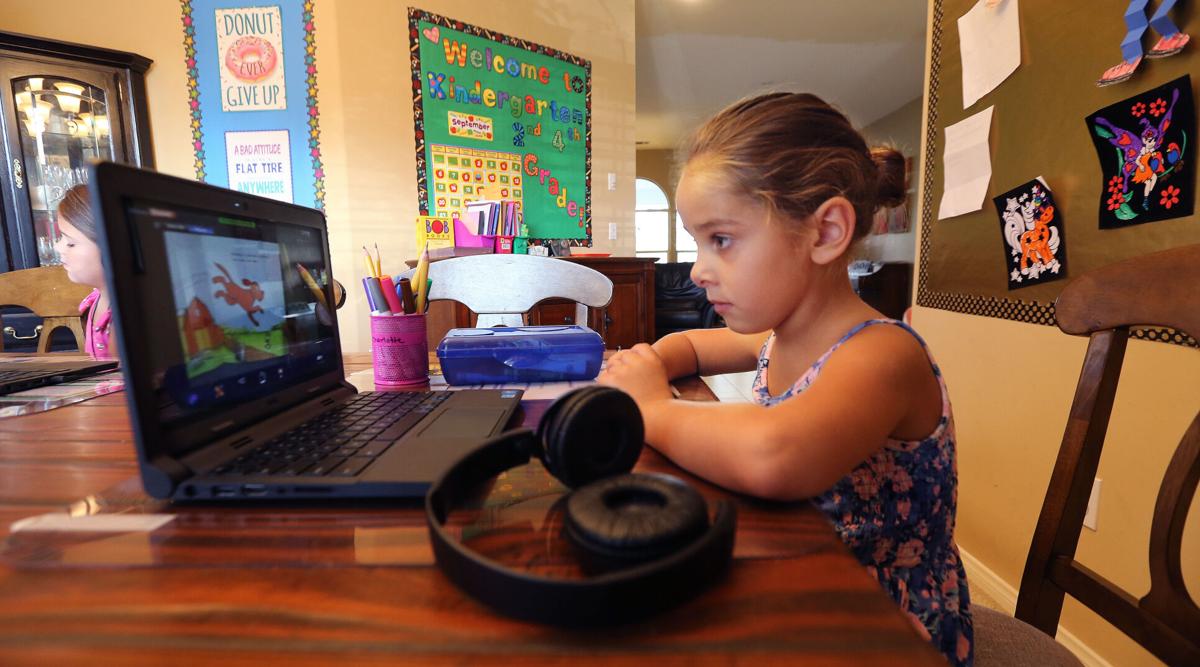 From her family's dining room, kindergarten student Charlotte Gurrola listens to a book being read to her by her teacher Kellee Maitia at Almondale Elementary School. 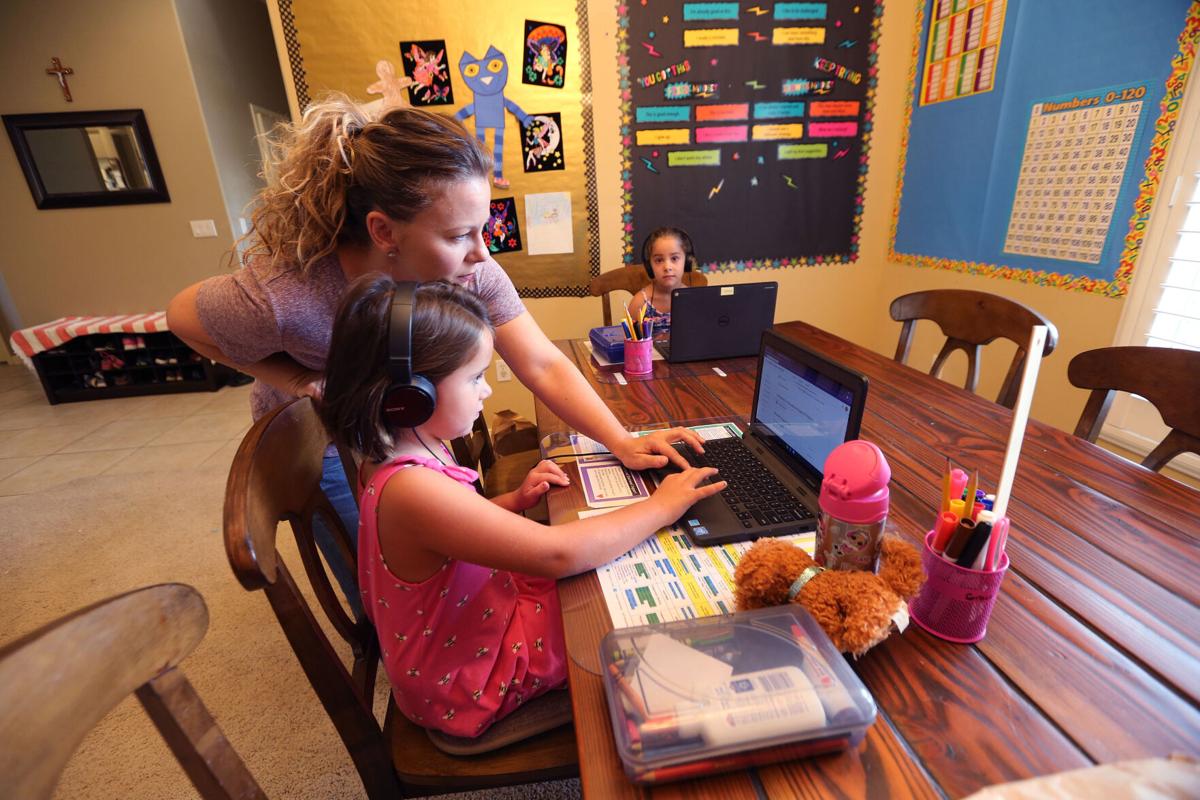 From the family dining room, a converted classroom, Ashley Gurrola helps her daughter Grace log into her second grade class. Kindergarten student Charlotte Gurrola is also logged on to her classroom at Almondale Elementary School in Rosedale Union School District. 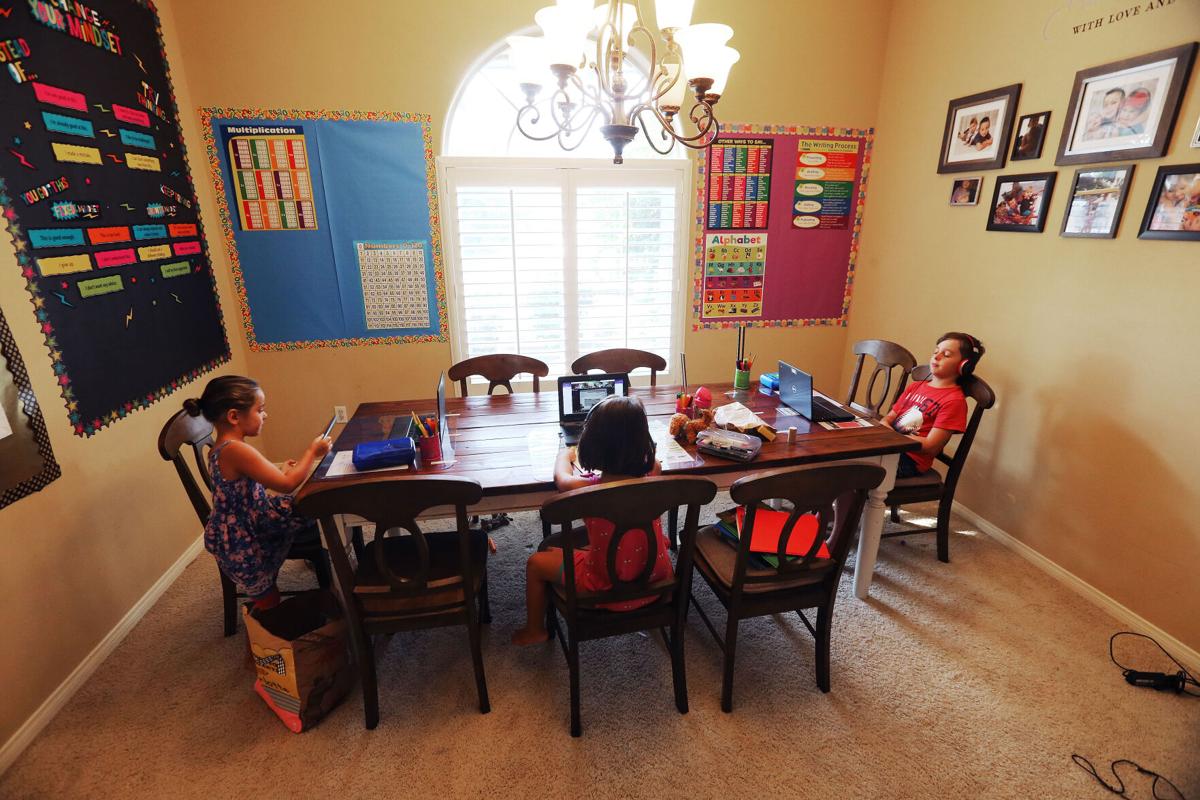 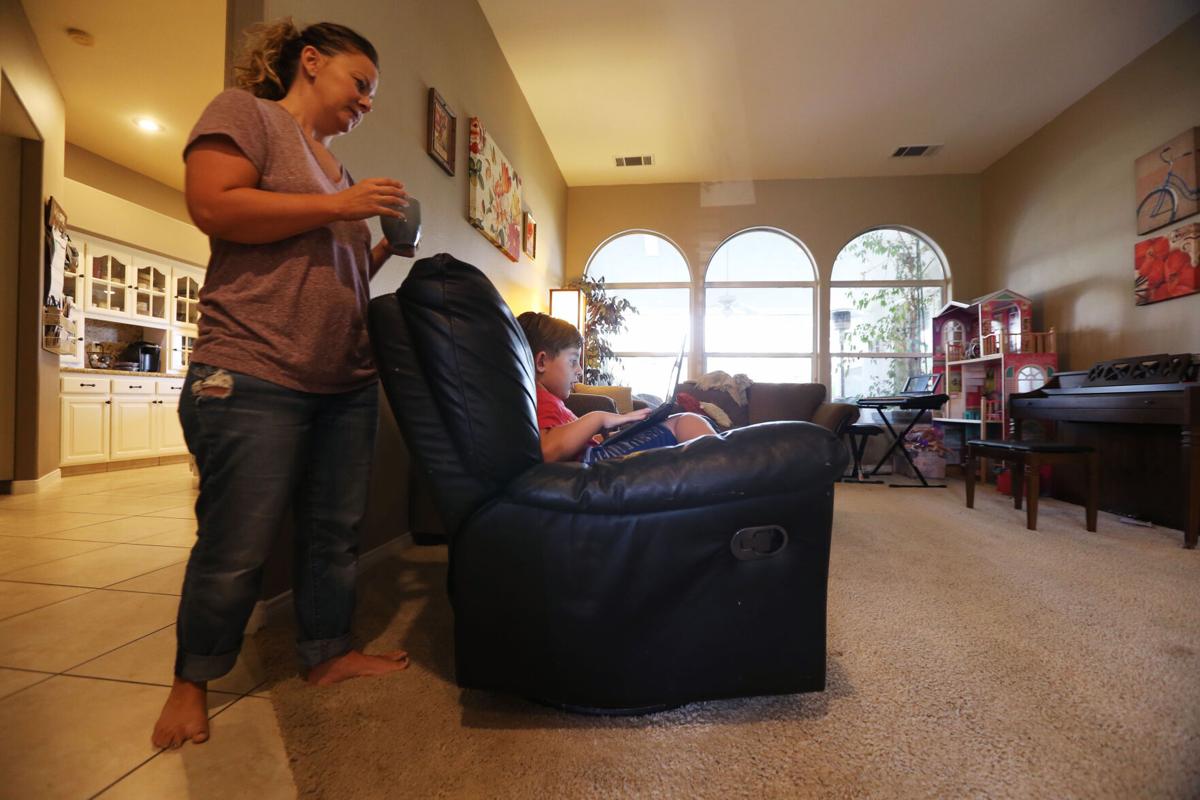 Ashley Gurrola checks up on her son Bradley's fourth grade class as he works on an assignment from the comfort of the family room chair. 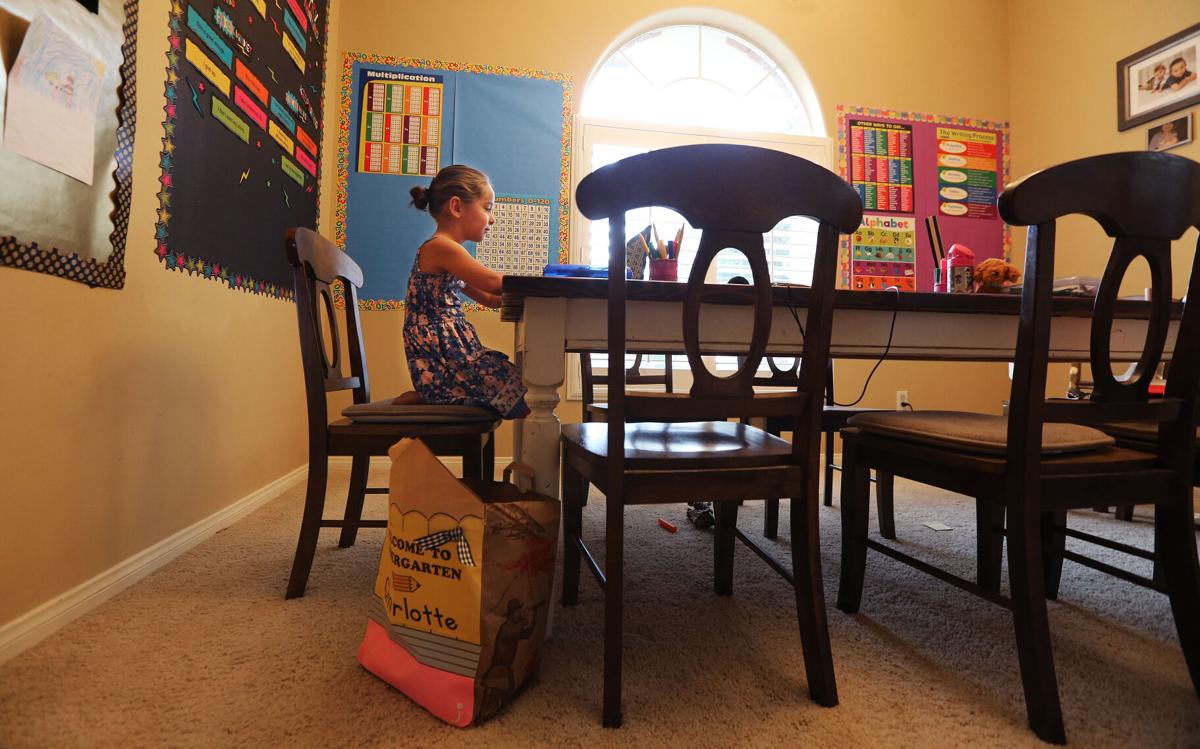 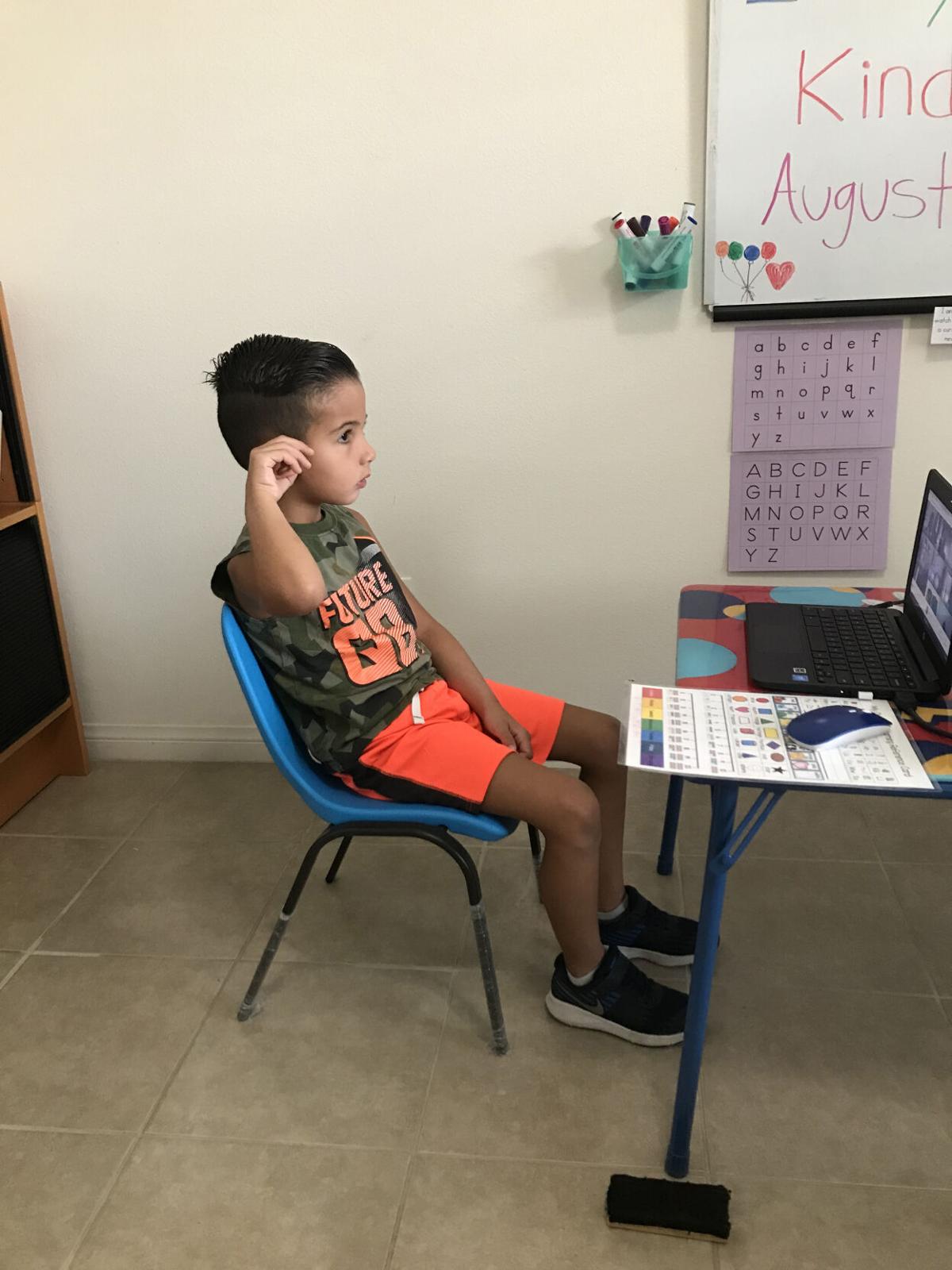 From her family's dining room, kindergarten student Charlotte Gurrola works on a journal assignment from her teacher Kellee Maitia at Almondale Elementary School.

From her family's dining room, kindergarten student Charlotte Gurrola listens to a book being read to her by her teacher Kellee Maitia at Almondale Elementary School.

From the family dining room, a converted classroom, Ashley Gurrola helps her daughter Grace log into her second grade class. Kindergarten student Charlotte Gurrola is also logged on to her classroom at Almondale Elementary School in Rosedale Union School District.

Ashley Gurrola checks up on her son Bradley's fourth grade class as he works on an assignment from the comfort of the family room chair.

Neither kindergarten nor transitional kindergarten is a requirement in California, and many parents in Kern County this year have opted out. But educators and parents who have opted into distance learning for the youngest students say that so far they’re surprisingly optimistic about how the experience has gone.

Parents worried that distance learning might look like it did last spring, when schools were scrambling to come up with a response to distance learning and settled on homework paper packets and regular check-ins that bore little resemblance to a regular school day.

“I didn’t want it to be like last spring where they were sent with a bunch of worksheets,” said Ashley Gurrola, a mother of three students at Almondale Elementary.

Gurrola considered homeschooling her children but she had faith the schools would pull it off — and she says they did, despite the challenges. Her daughter Charlotte loves logging on for school every morning, and she can hear her singing along to an alphabet song in the morning, enjoying her teacher’s puppet show in the afternoon.

“It’s easier than I expected,” she said. “I thought it was going to be a lot harder.”

“I know the kids were born, but they’re just not showing up,” said Standard School District superintendent Paul Meyers.

In his district, kindergarten numbers are down 10% but it’s the transitional kindergarten classes where they're really seeing low numbers: Classes have 10 kids, which is considered half-full.

He said one issue has been trying to reach out in the community, particularly to brand-new parents who don’t already have older siblings in the school district. It was also tough to get the word out during enrollment last spring when in-person communication was limited. The district put up yard signs to encourage enrollment, but it barely nudged the numbers up. Other districts are seeing similar trends, and they’re hoping to get the numbers up as the school year goes on.

“Research indicates that students benefit greatly from early educational experiences,” said Ramon Hendrix, Greenfield Union superintendent. “We want these 4 and 5 year olds enrolled in our schools as soon as possible.”

Kindergarten isn’t like other grade levels, but this year it’s a completely new ball game. Classes are streamlined. There are no lessons about how to sit, line up or keep your hands to yourself at recess, though there is new virtual etiquette about when to unmute yourself on video or when to tell your teacher you need a drink of water or bathroom break mid-lesson.

Teachers who have been in session for a few weeks say that young students know how to log in without help, and they’re often eager to. Teachers and administrators said that for those students who do enroll, attendance is great, often nearing 100%.

“The kids are eager to come everyday and learn and be in a routine. They have that thirst for learning and knowledge,” said Kellee Maitia, a kindergarten teacher at Almondale Elementary. “I didn’t think by day 14 I’d have full attendance: I thought I’d have half the class.”

Kindergarten teachers say they’re working hard to keep little ones engaged by encouraging them to sing and dance and by making a lot of exaggerated expressions and voices over the screen.

Sharouk Qumsieh worried her son Ramzi, a student at Douglas Miller Elementary, wouldn’t be engaged but she says her son is never bored when his teacher Marcie Huntley is on the screen.

The struggle comes when it’s time to log off and do offline work: “When I tell him to pick up a pencil, he’s like, ‘I’m tired.’”

At Almondale Elementary, the flag salute, announcements and calendar time has been rolled together into a separate video that doesn’t cut into class time, so that the focus is on curriculum. Maitia said they might not get to as many books as they might have but they’re on track for tackling the same concepts they did in a regular year.

“Even though we’re virtual, it’s paced in the same way it is if we’re in class,” Maitia said. “We’re not learning less or going slower.”

The school has done its best to recreate a tactile experience that a Chromebook can’t hope to recreate. Many schools have sent home their own “kindergarten kits.” Almondale sent home typical supplies like pencils, scissors and crayons, but also a whiteboard for students to hold up their answers and a sand tray to practice tracing letters, which is a student favorite.

“Before school started, we Zoom conferenced just about every family. They didn’t want their kid in front of screen learning the whole time,” said Almondale school principal Jen Pafford. “I think that parents’ concerns have been alleviated now that we’ve started.”

The connections that teachers have made with the community around the students has been a bright spot.

“We are truly getting to know our parents,” Huntley said. “I’ve already talked with them more than I have in past years.”

Teachers say that they see the whole community around students daily: parents or for the children of essential workers, the grandparents, uncles, aunts, older siblings and neighbors that have stepped up to help.

Parents and teachers are eager for regular school to open up for younger students, particularly because they are missing crucial early socialization. Some of the students haven't met their peers, though there are occasionally opportunities for a distant hello at lunch or packet pick-ups.

But right now, Huntley says that she’s most concerned about the English language learners in her class. Kindergarten is a great time for them to begin practicing language, because they pick it up quickly not only from the teacher but from their peers. She does spend extra time working with them on language development each day, but she’s hoping that these students will be able to come back soon.

“I do feel like this is going to cause gaps in English Language Learners,” she said.

Under new guidelines from the state, English Language Learners as well as other students with special needs may be able to return to school first, even in counties like Kern whose COVID-19 rates are too high for a traditional reopening.

And educators do worry about the kids who still aren’t in school, either because they don’t believe distance learning will work for their young children or because they have a work schedule or home life that doesn’t seem conducive to learning. They encourage these parents to reach out for help.

“We want kids here. We want kids learning,” Maitia said. “If they have concerns, they should talk through things with their school.”

PHOTO GALLERY: The challenges, positives of kindergarten at home

Neither kindergarten nor transitional kindergarten is a requirement in California, and many parents in Kern County this year have opted out. B…

All the data shows not one cases of a student infecting a teacher with COVID 19, this is world wide not just the US. The schools should be reopened but the teacher's unions are against it. Funny how essential workers have been able to figure out how to protect themselves and still do their jobs, but these highly educated professional teachers can't. If Biden wins, the virus will magically disappear and schools will reopen.

If anybody thinks virtual school is good for the kids ...you are delusional.

Interesting. Feedback from teachers and parents is the exact opposite. Spin much, Californian?