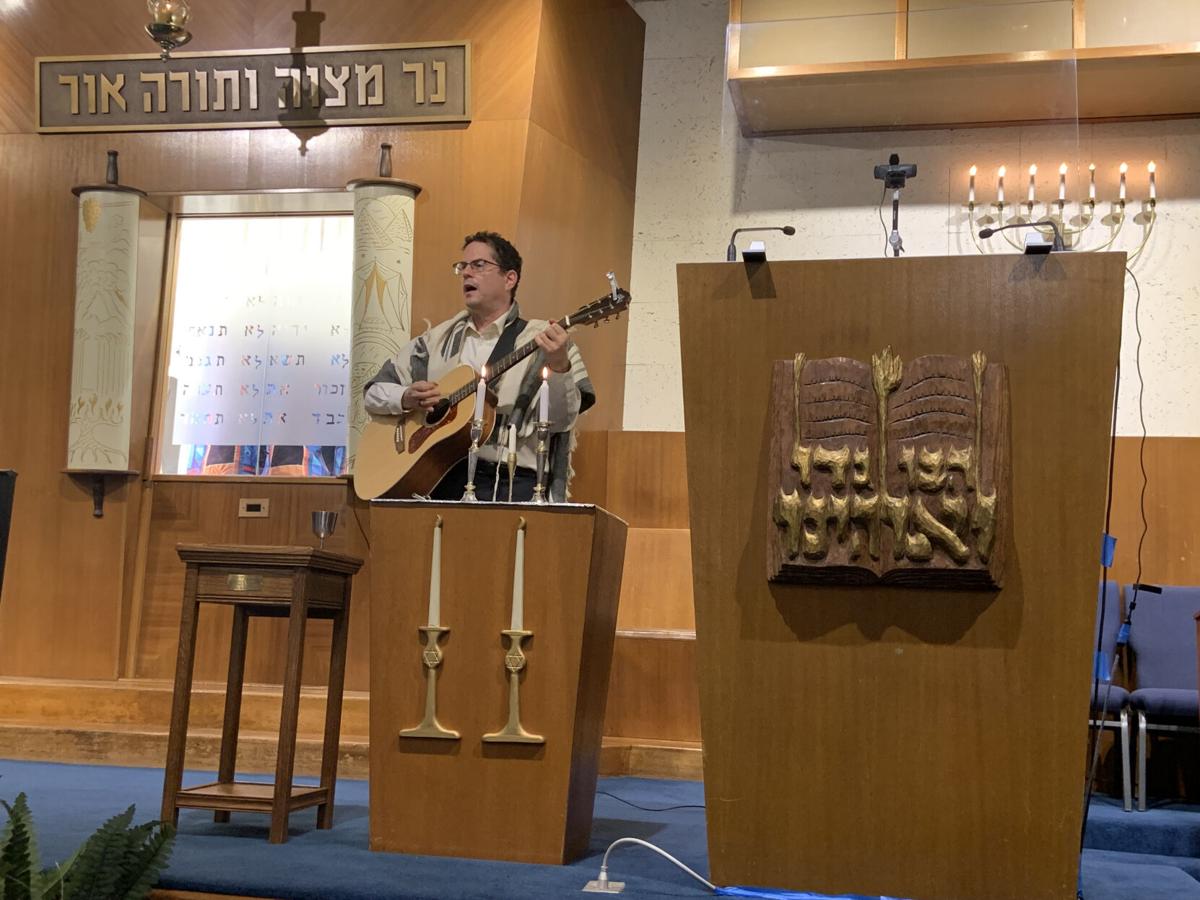 Rabbi Jonathan Klein leads everyone in prayer Friday night at Temple Beth El by strumming on his guitar during Shabbat, or service. 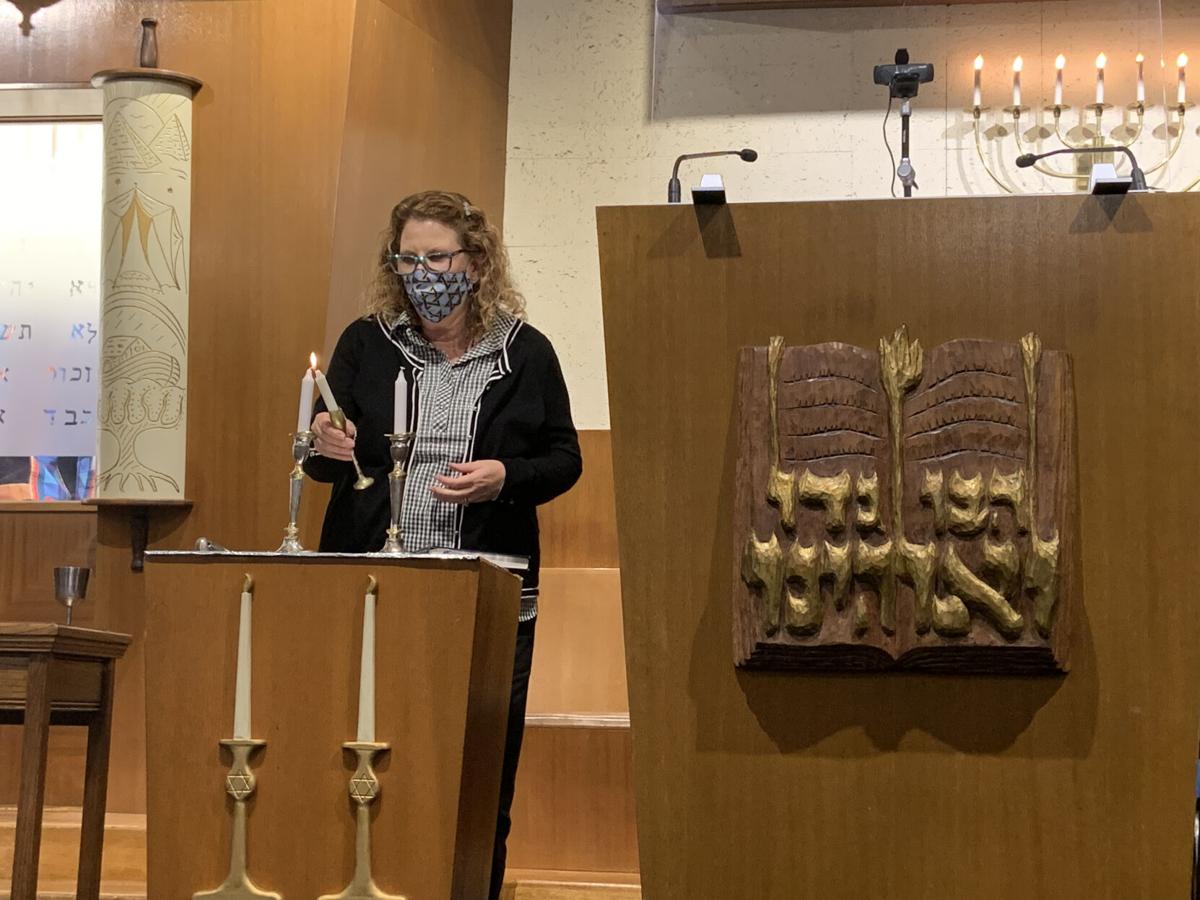 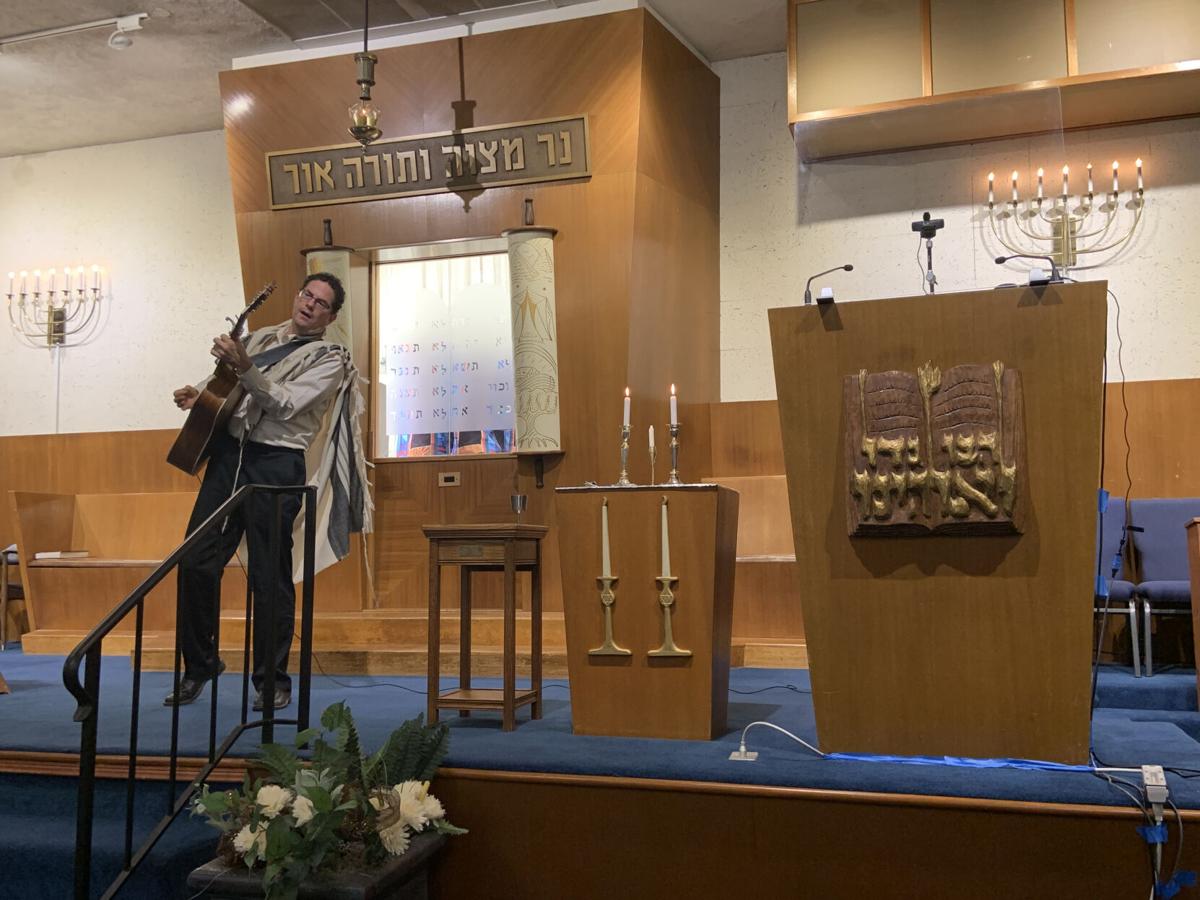 Rabbi Jonathan Klein leads everyone in prayer Friday night at Temple Beth El by strumming on his guitar during Shabbat, or service.

That music returned to the synagogue Friday and Saturday when it opened for the first time since the pandemic began in March 2020.

“I have goosebumps just at the idea of being here,” congregant Esther Brandon said before the start of Friday evening's service. “We have history here.”

The synagogue shut down immediately as the pandemic unfolded throughout the United States, said Rabbi Jonathan Klein, who assumed the post in May 2020. Services, or Shabbat, shifted onto Zoom.

Many Bakersfield churches and places of worship defied the restrictions implemented by the California Department of Public Health for indoor gatherings and continued to hold in-person services. Temple Beth El heeded the advice of public health officials because the Jewish community centers around communal safety, Klein said.

The synagogue attempted to reconvene in person this summer, but that didn’t last. Klein said the quickly spreading delta variant reignited fears of contagion and the virtual sessions continued.

“We’re hoping that by coming back in person, new vitality will come,” Klein said.

Caution was not tossed to the wind. Those congregants who could take the jab had to present their vaccination card and all wore a mask to participate in Shabbat.

Fears still exist in the older community about becoming infected, and therefore some did not attend in person. A hybrid format, both in person and online services, will continue in the future, the rabbi said. In total, about 20 people attended in person at Friday’s service and about 25 people attended via Zoom.

The virtual world allows individuals to attend from Alaska to Kansas, Klein said.

“We are making the best of a complicated situation,” he added.

Jewish prayers center around communal worship; the two days provided everyone with a chance to hear and see their peers all gathered.

“I really didn’t feel Jewish until I came to Bakersfield.” Parr said.

The synagogue came alive as Klein strummed a guitar; congregants sang hymns and bowed occasionally. He took residents to Israel with their worship and discussed Issac’s story from the Torah.

The rabbi also unscrolled the Torah and carried it through the aisles for everyone to witness the holy scripture up close. The Torah contains five books — Genesis, Exodus, Leviticus, Numbers, Deuteronomy — and is handwritten by a specialist in Hebrew. Everyone also prayed for the sick and family members who are grieving.

Saturday evening closed the Sabbath through a ritual called Havalah, which signals the return to normal life, Klein said.

Marianne Gartenlaub has attended Temple Beth El for 25 years. Her daughter Adison, 14, accompanied her, and has prayed at the synagogue since she was a baby. The precautions undertaken by the religious leaders helped her feel safe. She saw firsthand the effects of the pandemic when her husband was hospitalized after contracting COVID-19.

The older community receiving their booster shots, and increasing numbers of vaccinations, also bring her relief.

“There is so much hope in that,” Marianne said.