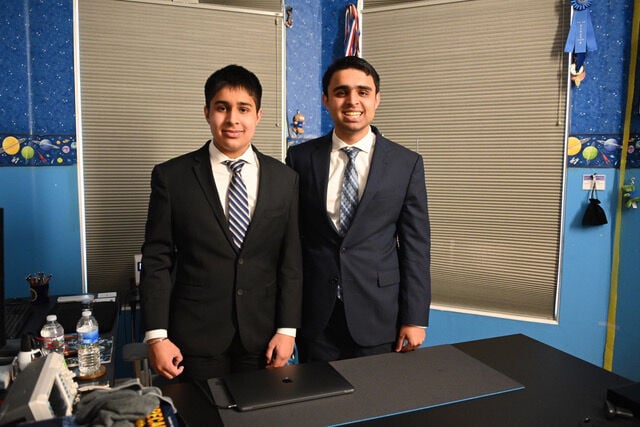 Harjaisal Brar (left) and Ishaan Brar (right) brother and students at Stockdale High School both competed and placed for their biomedical engineering projects at the Regeneron ISEF (international science and engineering fair). 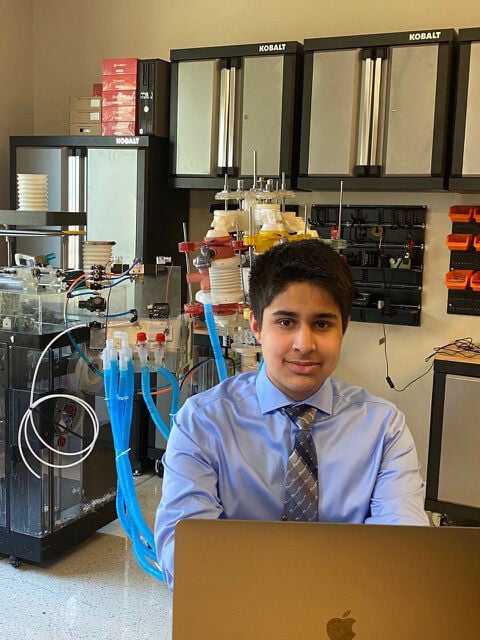 Harjaisal Brar, a freshman at Stockdale High School, created a Novel 3D Printed Ventilator for COVID-19 that earned him a place at the Regeneron ISEF (international science and engineering fair).

Harjaisal Brar (left) and Ishaan Brar (right) brother and students at Stockdale High School both competed and placed for their biomedical engineering projects at the Regeneron ISEF (international science and engineering fair).

Harjaisal Brar, a freshman at Stockdale High School, created a Novel 3D Printed Ventilator for COVID-19 that earned him a place at the Regeneron ISEF (international science and engineering fair).

Bakersfield isn't known for its high-tech laboratories but the Brar brothers haven't let that get in the way of their scientific experiments.

The Stockdale High School students turned their home into a laboratory where they each tried to solve different problems in the medical field.

It paid off for both at the recent Regeneron ISEF, an international science fair where high school students from 75 countries compete against one another.

Harjaisal Brar, a freshman, earned second place in the biomedical engineering division for his 3D printed COVID-19 ventilator. He was bested only by his older brother Ishaan Brar, a senior, who won first place in the same division for designing a catheter that includes valves that aims to decrease the risk of infection and death.

The brothers said they relied on equipment they ordered from the internet and 3D-printed parts.

"It makes it more accessible to us and the real world," Harjaisal said.

Ishaan came up with his idea when he was shadowing a doctor and learned that an estimated 13,000 people in the country die every year from the infections attributed to catheters. He decided it was long past time to update the design.

One of the problems with catheters is that biofilms, a slimy layer of dangerous bacteria, can accumulate and travel up into a patient's body. His design allows the catheter to include channels of chemicals that attack these biofilms. He also designed them with valves that allow fluid to flow one direction and prevent the crystallization of urine salts.

Harjaisal said he came up with his project in April 2020 when he heard there was a ventilator shortage during the COVID-19 pandemic, especially in rural areas and developing countries. He wanted to come up with an accessible design that could be replicated on a 3D printer, which would reduce the costs that come with proprietary parts and also help to address shortages. His design costs $2,000 — far below the cost of a typical ventilator.

This isn't Ishaan's first entry at Regeneron ISEF. He had actually been able to attend the competition when it was in Phoenix in 2019. But this was a momentous occasion not just because he did so well, but because it was the first year that Kern County's science fairs was eligible for entrance into the competition.

He had previously gained entrance to the event through Fresno, and it was such a great experience for him, he pushed for Kern County Science Fair to do the same thing.

"I knew Kern County students would be able to do well at the event and be able to really thrive," he said. "I knew we could increase science fair participation and we could really make an impact."

This year the science fair was held virtually, so it wasn't quite the same as that year he experienced it as a week-long event in Phoenix. But it was impressive just the same. They spoke with scientists from Johnson & Johnson. Nobel Prize winners and leading researchers in the scientific community gave seminars.

Judges come from the actual fields that the students' projects are in. So Ishaan's winning novel catheter design was judged by someone at the Cleveland Clinic who works on heart valves.

Ishaan hopes that future generations of Kern County residents are able to have the same experience at the international science fair.

Working on projects is a family affair. Ishaan said their parents who are doctors have given them valuable advice. And the brothers like to work together to tweak their ideas.

"We bounce ideas off of each other," Ishaan said.

Even though the science fair is over, the scientific method never ends. Harjaisal is working on making his ventilator design even more compact. He also has a new project to help people who need help walking.

Ishaan is planning on heading to Duke University in fall where he hopes to do research. He hopes to partner with a university for his catheter design.