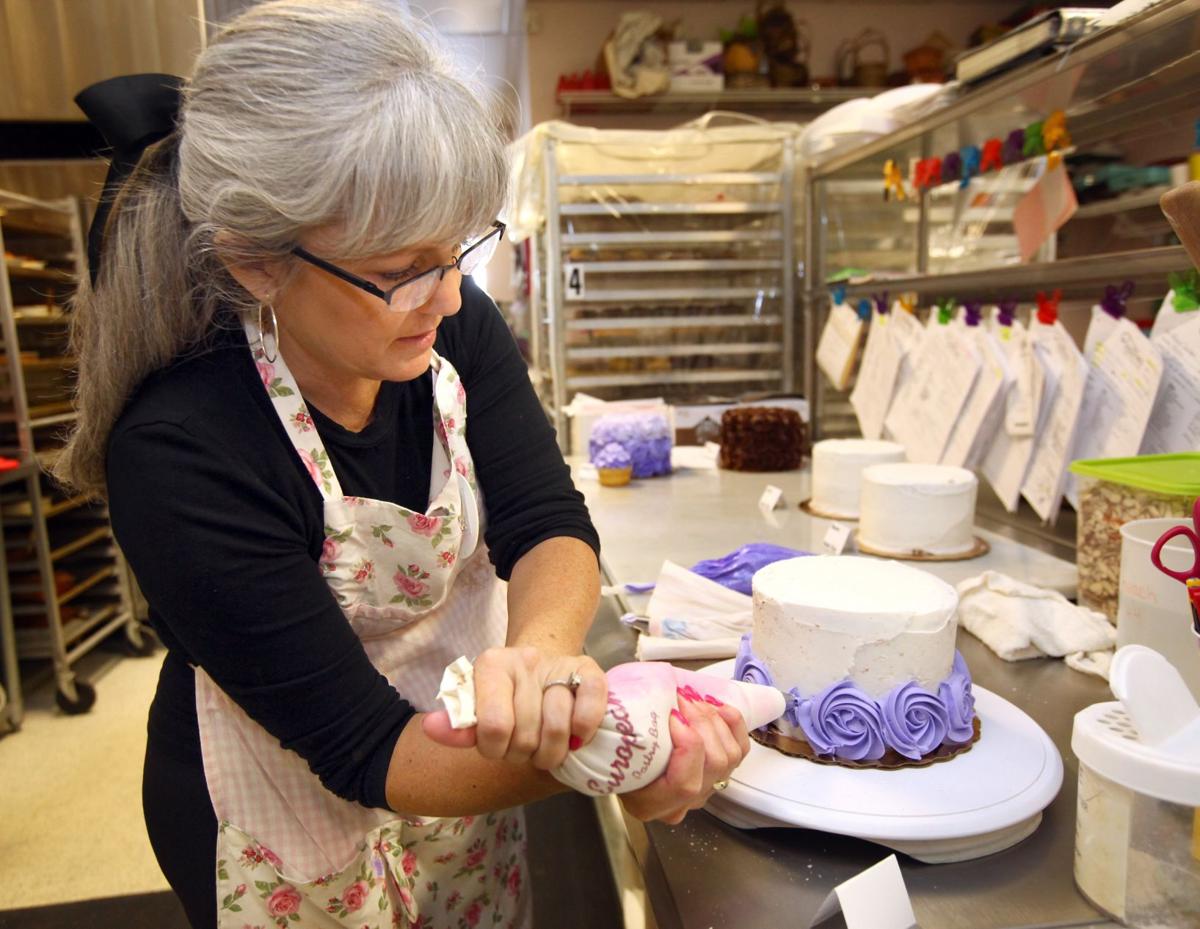 Tastries owner Cathy Miller decorates a cake at the store on Rosedale Highway. 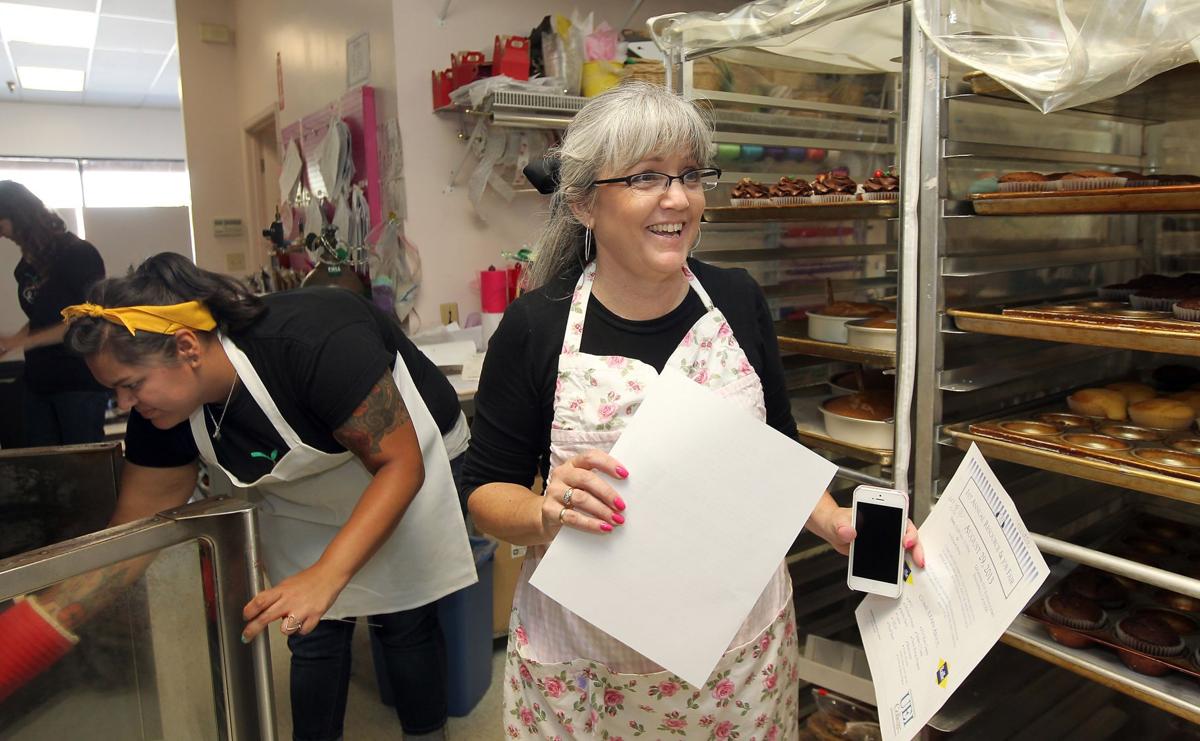 Tastries owner Cathy Miller announces the good news of a large order for the business in this file photo. 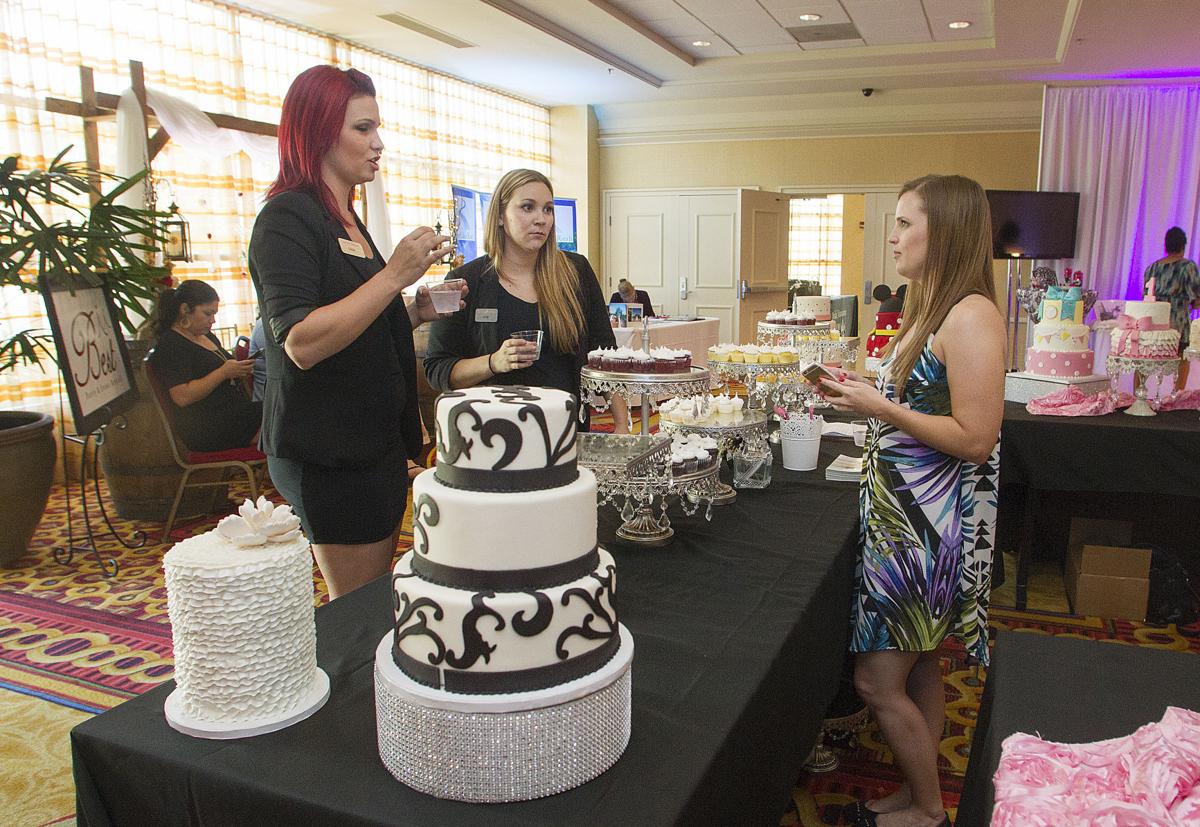 Tastries Bakery welcomed potential customers at the Fairytale Bridal Event to show some of their bakery creations that include wedding cakes, cupcakes and cookies and event coordinating among other things.

Tastries owner Cathy Miller decorates a cake at the store on Rosedale Highway.

Tastries owner Cathy Miller announces the good news of a large order for the business in this file photo.

Tastries Bakery welcomed potential customers at the Fairytale Bridal Event to show some of their bakery creations that include wedding cakes, cupcakes and cookies and event coordinating among other things.

Rosedale Highway bakery Tastries has refused to make wedding cakes for two same-sex couples in the past week, triggering a fierce debate on social media and attracting stories by national media outlets including the New York Daily News and the San Francisco Chronicle.

And people are asking if business owner Cathy Miller’s decision may have violated California’s Unruh Civil Rights Act, which requires “all business establishments of every kind whatsoever” to provide service to people in a host of protected classes — including people of diverse sexual orientations.

Legal action based on the law could land Tastries among a small collection of bakery businesses that have been sued across the nation for refusing to serve same-sex couples.

Miller said Monday that she hopes that all sides of the situation can find a peaceful path forward.

But, she said, she has to follow her beliefs.

“My conscience doesn’t allow me to participate in certain activities that are contrary to my Biblical beliefs,” Miller said. “I pray that we can all come to an understanding so that we can continue to get along.”

And despite the criticism from some corners, Miller said Tastries had a good day Monday.

“The community has loved and blessed us abundantly today at the bakery. We have had to restock the shelves three times,” she said.

But the two couples who say they were denied service by Miller are also gathering support on Facebook.

Just after noon on Saturday, Ted G. Freitas posted a story on Facebook describing the appointment he and fiancé Adam Ramos had with Miller — accompanied by a photo of the business covered by a red circle and slash.

“So the fiancé and I are out cake tasting in Bakersfield for our big day and the lady helping us — I have another name for her — asks, ‘So this is for the bride and groom?’ ‘Uh, no it says Adam and Ted on your form!’ When we let her know, that it’s for us, she quickly, without hesitation, replies, ‘Well I’m going to transfer your order to Stephanie at Gimme Some Sugar Cakes.’

"She stands up, walks away, and calls Stephanie to ‘transfer’ us — I think she meant to say refuse service to us — and refer us for an appointment. After she leaves a voicemail with Stephanie she comes back to update us and says, ‘Ok, I’ve called her and left a message. We can do the design and Stephanie can do the filling. Your welcome to stay and enjoy my cupcakes’ and walks off.”

Freitas did not respond to a message requesting an interview Monday.

Roughly an hour after Freitas’ post went live, Eileen Del Rio posted that she and her same-sex fiancé were also denied service earlier that week.

“So we go to this bakery a week ago to sign up for tasting and choose our wedding cake. The owner met with us today to set up the process. Well this rude (word removed) person says, ‘I will make your order but I don't condone same sex marriages and will have no part in this process.’ ‘Oh, but you want to take my order and give it another bakery so that bakery can do it.’ The rude person is also the owner of the place. She don't condone same sex marriages so refused to make our wedding cake and set up our order. She wanted all our information to send to another bakery so they could make it,” Del Rio wrote on her Facebook page Saturday afternoon.

Weddell declined to comment on the Tastries situation Monday.

But friends shared their support with comments on Del Rio and Freitas’ posts and several urged the couples to sue Tastries under the Unruh Civil Rights Act.

Several posts exploded into long critiques of Miller’s decision and debates with supporters of Tastries who urged people to leave the bakery alone and questioned why Miller should have to compromise her beliefs to run a business.

"She didn't want to do it!! Okay, that's her beliefs. It doesn't mean you're going to trash her name (or) her business. She did it in a manner where she recommended a different bakery. She didn't bash you and kick you out! Today (I've) seen the true colors of the gay community, lol. Disappointed. She's a business let her move on," wrote Kyle Gaucher on Facebook.

One other local bakery is struggling with the fallout from the Tastries situation.

Stephanie Caughell-Fisher, owner of Gimme Some Sugar Bakery, said her business is the one to which Miller referred Del Rio and Freitas.

She talked to the two men on Saturday.

She said the employees of Tastries had set up the appointment for the two men to taste for their cake and they knew it would be a same-sex couple.

But Miller came around, learned the cake would be for two men, and ended the appointment.

“She basically took the clipboard out of his hand and said you won’t be needing this,” Caughell-Fisher said.

“I called them immediately because I knew what she was doing over there,” she said. “I made sure they knew they didn’t have to go with Gimme Some Sugar. You can’t send someone packing because they are gay.”

But Caughell-Fisher said she’s gotten blowback from people who are asking why she agreed to accept referrals from Tastries.

She said she does not complete orders made at Tastries. And she is not, she said, in business with Miller.

She is, she said, trying to help people Miller has rejected.

“About a year ago, in August, Cathy walked into my bakery quite distraught about being asked to make cakes for same-sex couples,” Caughell-Fisher said.

Miller, she said, told her that she felt that God was telling her “not to make these people’s cakes.”

Caughell-Fisher said she told Miller, “You probably shouldn’t be turning people away because they are gay. It’s super hurtful. It’s really going to wreak their journey.”

And, she said she told Miller, it is illegal.

But Caughell-Fisher did agree to have Miller refer same-sex couples to her business.

Her hope, she said, was that she could help those couples recover from the traumatic experience they’d just had at Tastries and try to restore the sense of joy and magic that is supposed to surround a wedding.

In the past year, Caughell-Fisher said, Miller has only directly referred two couples to her.

Why didn’t she immediately call Miller out publicly for refusing to do business with same-sex couples?

It isn’t her business to tell Miller how to operate Tastries, Caughell-Fisher said.

And attacking another bakery — in Bakersfield’s competitive baked goods marketplace — would have been seen as self-serving, she said.

The discussion would have been about her attack on another business — not about Miller’s decision not to serve same-sex couples.

“I would have been the jerk if I called her out,” she said.

The issue of whether business owners have the right to deny services to same-sex couples because of religious beliefs has been under debate for years as same-sex marriages became legal in more and more states and eventually the nation.

Jack Phillips, owner of Masterpiece Cake in Lakewood, Colo., refused to make a cake for Charlie Craig and David Mullins in 2012.

The couple sued and the case has made its way through trial and appeals courts and now is expected to be heard by the U.S. Supreme Court this fall, according to the Denver Post.

According to the Post, Phillips has closed his business in the wake of rulings and appeals decisions that went against him.

WHAT THE LAW SAYS

California’s Unruh Civil Rights Act, contained in the state’s Civil Code, makes it illegal for business owners to discriminate against people based on their background, race, sexual orientation or other factors.

“All persons within the jurisdiction of this state are free and equal, and no matter what their sex, race, color, religion, ancestry, national origin, disability, medical condition, genetic information, marital status, sexual orientation, citizenship, primary language, or immigration status are entitled to the full and equal accommodations, advantages, facilities, privileges, or services in all business establishments of every kind whatsoever.”