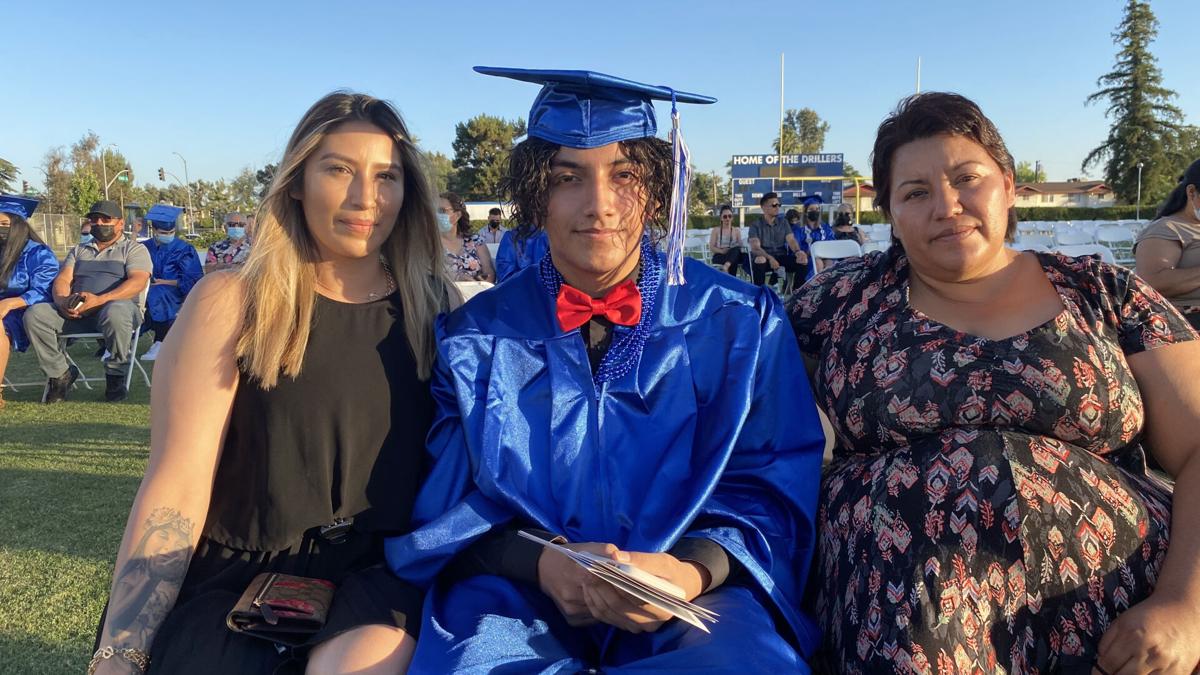 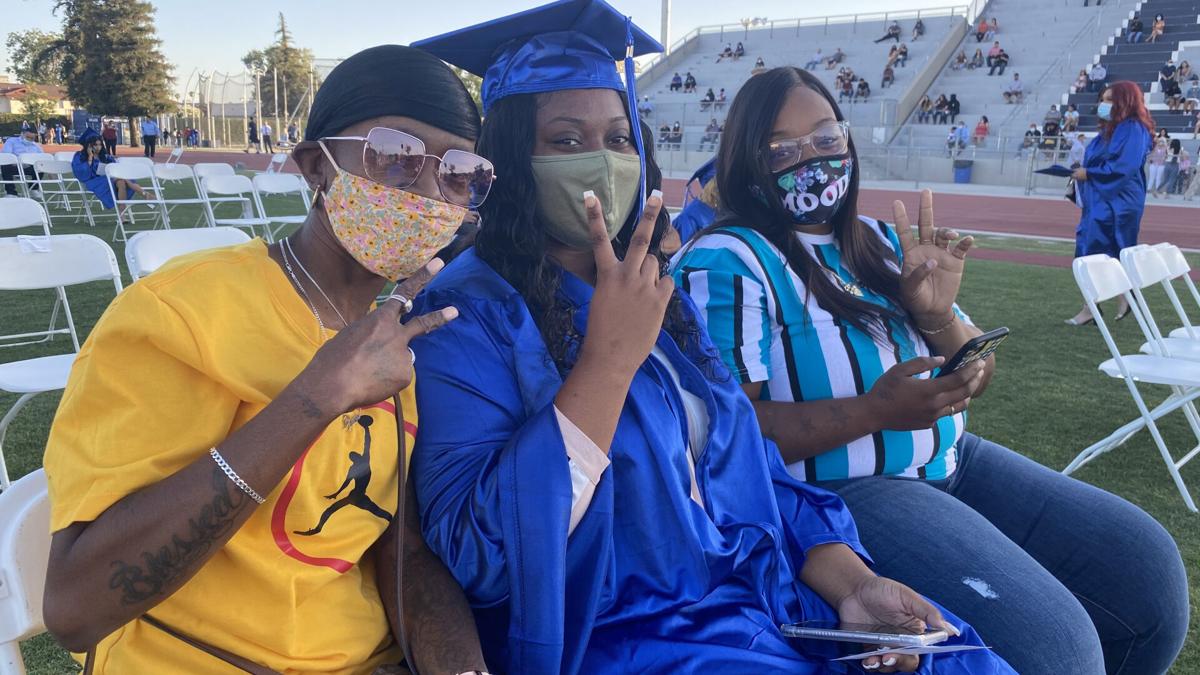 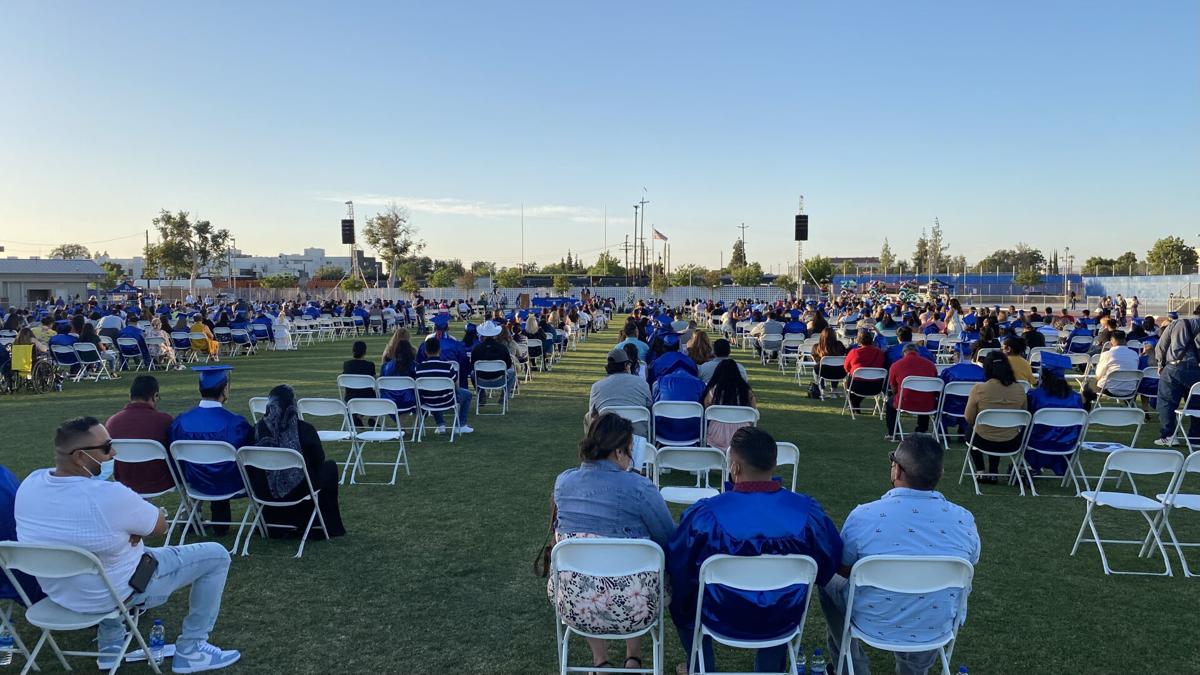 The Kern High School District held a graduation for students from its alternative high schools at Bakersfield High School on Tuesday night.

The Kern High School District held a graduation for students from its alternative high schools at Bakersfield High School on Tuesday night.

The Kern High School District honored the graduates of its alternative programs with a ceremony at Bakersfield High School's Griffith Field in the waning light of Tuesday evening.

Chris Dutton, site administrator for Tierra Del Sol Continuation School, said the graduates from his class were full of "profiles in courage." He said a lot of families lost their jobs and struggled during the pandemic. He was proud of how many students graduated this year.

"We had students step it up and dig deep," he said.

Even before the pandemic, the road to graduation wasn't a straight line for many students. That was embodied in a speech by Carlos Flores, a graduate from Nueva Continuation School, who told the audience about his remarkable turnaround from a 0.2 GPA his freshman year.

"At the time, I didn't have much confidence in myself," he said. "It took me awhile, but I never thought I'd be giving a speech at graduation night."

Flores finished his senior year as an Honor Roll student and as a member of the districtwide student advisory council. He also earned the Senior of the Year and an award from the Greater Lamont Chamber of Commerce.

Vista graduate Petra Romero said she was dedicating her graduation to her late parents who died when she was young. Her grandmother Pauline Castillo said she promised her son, Romero's father, that she would ensure that Romero and all her siblings would graduate from high school. Romero is the youngest sibling, so her graduation on Tuesday represented the fulfillment of that promise.

Castillo rented a car and drove in for graduation, a big personal expense for a family that has struggled with money. But she said it was important.

"She has gone through a lot with her journey," Castillo said. "I'm glad she graduated."

Graduation was also a momentous night for the Espinoza family. Eddie Castro-Espinoza, a graduate of Nueva Continuation School, is the first person in his family to graduate from high school and he doesn't plan on stopping there. He's heading to Bakersfield College. He'd like to ultimately study architecture.

His mother, Isabel Espinoza, said she was happy to see her son achieve what he had worked so hard to do.

"I feel happy, very happy and grateful to God and also grateful for my son, who did what he wanted to achieve," she said in Spanish.

Graduate Jenesie Chris said she came to Tierra Del Sol with a completely different mindset that put her on track for graduation — and perhaps to go into the medical field.

"She has the potential," she said.

Stockdale High seniors breathe a sign of relief as they graduate