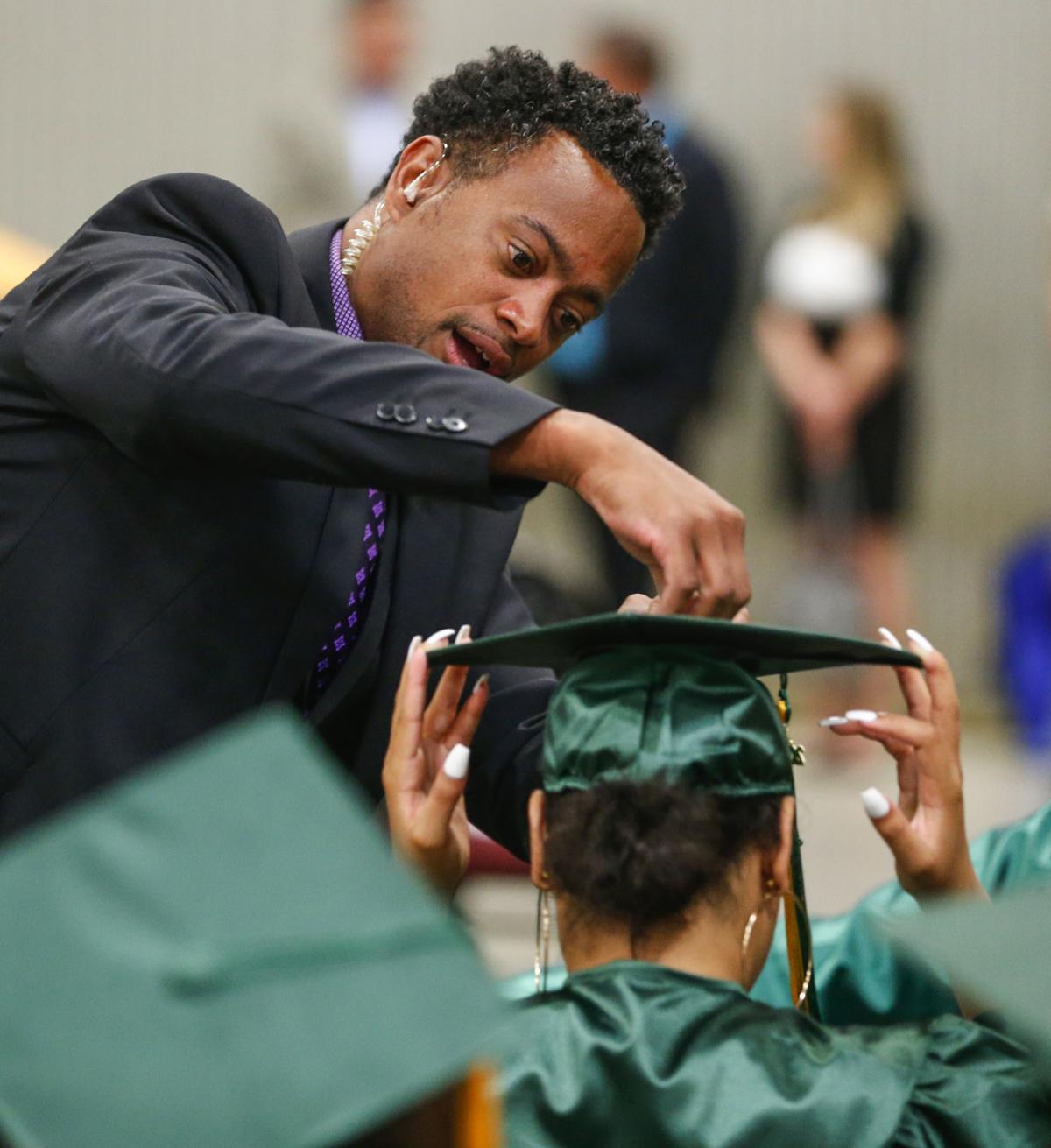 West High Assistant Principal Fabian Buckner fixes the tassel on the cap of one of his students before the start of a 2018 commencement ceremony at Mechanics Bank Arena.

Libby Tracy, a physical education teacher at Beardsley School District, shared his story of being recruited by a coach at CSUB and how it helped him escape a tough neighborhood in Watts during Thursday's BEST Man Teach event. 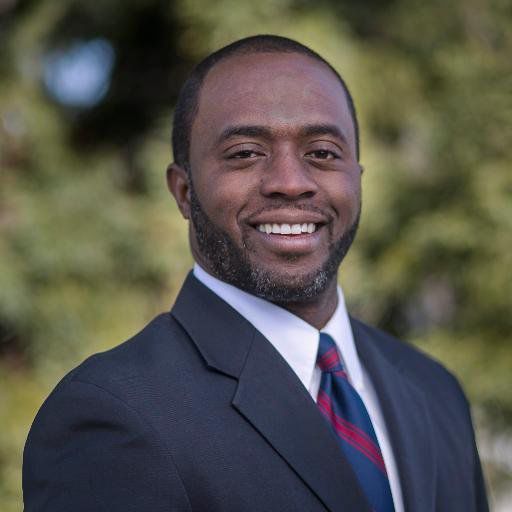 West High Assistant Principal Fabian Buckner fixes the tassel on the cap of one of his students before the start of a 2018 commencement ceremony at Mechanics Bank Arena.

Libby Tracy, a physical education teacher at Beardsley School District, shared his story of being recruited by a coach at CSUB and how it helped him escape a tough neighborhood in Watts during Thursday's BEST Man Teach event.

Last year in Kern County, 1.7 percent of teachers were Black men. So Thursday the second annual BEST Man Teach event served as a local recruitment effort among high school students to help swell the ranks of educators with Black men.

“We want to make it normal for Black males to think about teaching as a career choice,” David Sandles, a Cal State Bakersfield faculty member, told attendees.

Kern High School District students were invited to the event, held as a collaboration among several community groups, including the district and CSUB. The goal of the event is to start getting the local pool of potential Black male teachers to think about education even before they go to college. In Kern County, that pool drew from KHSD’s Project BEST, which stands for Black Excellence in Scholarship and Teaching.

Chris Dutton, district administrator for BEST, said the program that began in 1991 has been successful in its goals of graduating productive young Black men. It helps to counsel Black students on 16 KHSD campuses through a college preparatory curriculum and helps students apply for college and financial aid. But recently the project has wanted to go back to the “T” in its name.

“The dream is that these young men will consider teaching as a career,” he said.

Those BEST participants who range in age from freshmen to seniors were among those who logged on Thursday for a speech from California State Superintendent of Public Instruction Tony Thurmond, a virtual college campus tour of CSUB, a warm welcome from President Lynnette Zelezny, a performance of “Lift Every Voice and Sing” by Grammy-nominated singer Jarrett Johnson and breakout sessions from several Black local teachers and administrators.

Thurmond told students that the nation is at an “inflection point” when it comes to issues of race. He said inside the classroom Black students are expelled as preschool students, disproportionately placed in special education and often receive substandard education. Outside the classroom, he pointed to a pandemic that has hit communities of color especially hard, poverty and over-policing in communities of color, which has received extra attention in the deaths of George Floyd and Breonna Taylor.

“Racial injustice screams for change in our system,” he said.

Thurmond lauded the BEST Man Teach event for its work recruiting Black men to work in education. He pointed to research that says having educators of color and men of color in the classroom can drastically improve the lives of students, especially in lower grades: It lowers dropout rates and increases college graduation rates.

He called on KHSD students to think seriously about entering the field.

“You are being recruited to be academic leaders,” he said. “As you think about what you are going to do in your future, I want you to think about how, at this inflection point, you becoming a teacher can allow you to do powerful things for our young people: to make a difference for them, to ensure that they graduate, that they get some postsecondary education, maybe go on to college, but that they don’t drop out of school and that they don’t end up in our criminal justice system.”

The presenters, many now leaders in Kern County, shared stories about the low expectations and barriers they had to overcome in their own troubled educations. Many had few Black teachers at all and little academic support.

Fabian Buckner, now an assistant principal at West High School, grew up in Bakersfield and was tested for special education and was held back a year in third grade. He was beset at a young age with feelings of anger and failure.

His mother told him, “While everyone else gives a 100 percent, you have to give 150 percent.”

Buckner said he did take her advice, took college-level classes even when counselors tried to dissuade him and he graduated from Foothill with a 3.2 GPA while taking honors courses.

Another presenter, Libby Tracy, told attendees his story of how he made it from the back of a police car in Watts to the head of the classroom. Tracy has worked as a physical education teacher in Beardsley School District for the past 14 years and he mentors youth.

Tracy decried the low expectations that teachers had for him and his peers at his schools. He had always scored high on tests from the time he was young. He and others showed promise as athletes who could get scholarships, but even coaches didn’t seem to make much of an effort to push them onto the college track.

“They thought we were low-lifes,” Tracy said. “They give up on you real quick.”

He not only credits the late CSUB track coach Lee Adams with bringing him to Bakersfield but also making sure that he ultimately finished his degree. When Tracy found out he wouldn’t have enough credits at the four-year mark he abandoned his studies for years. Tracy said Adams went into the projects and encouraged Tracy to get back on track. Ultimately, Tracy returned and got his teaching credential.

But it all started with Adams recruiting Tracy as a junior in Watts.