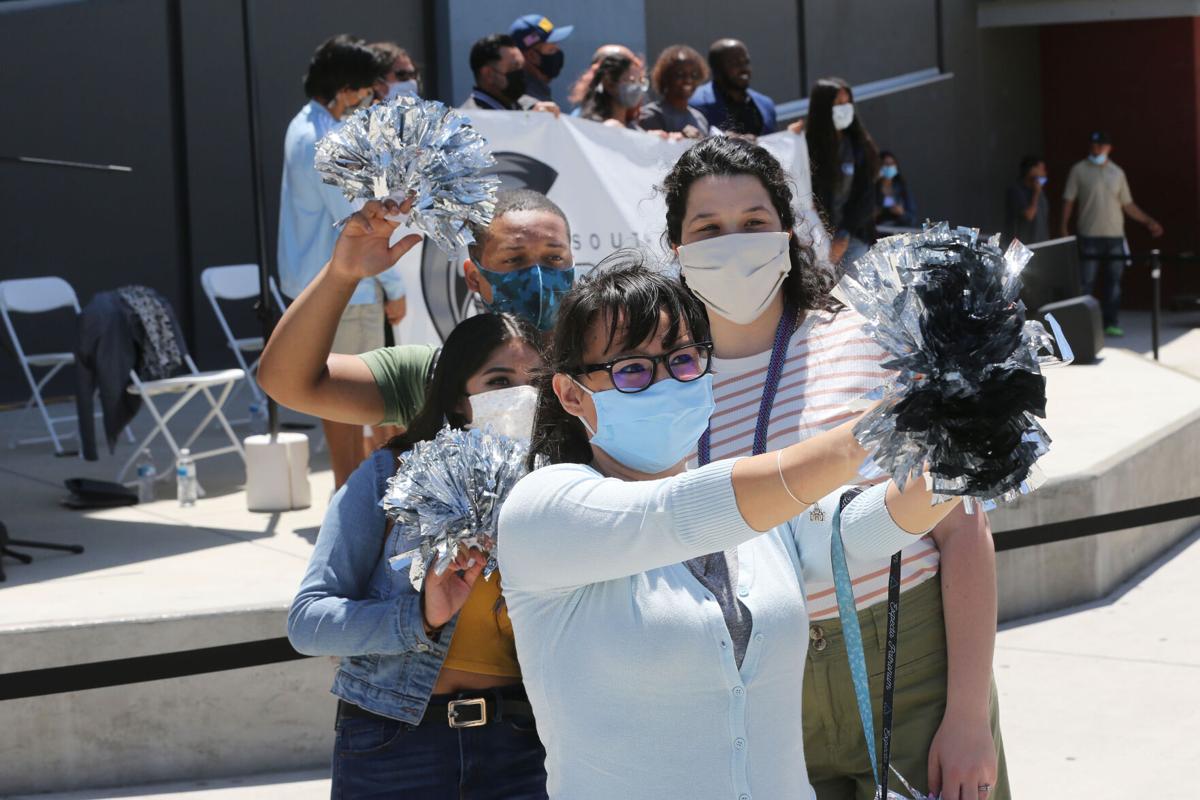 Math teachers Amanda Jimerson and Gabriella Cervantes photograph themselves with students Rosely Cabrera and Bryan Moore in celebration of the new mascot. South High School administration, staff and students, along with the South High Mascot Committee, unveiled the school's new mascot in the quad area on Friday. South High School retired its Rebel mascot and celebrated by welcoming a new mascot: Spartans. 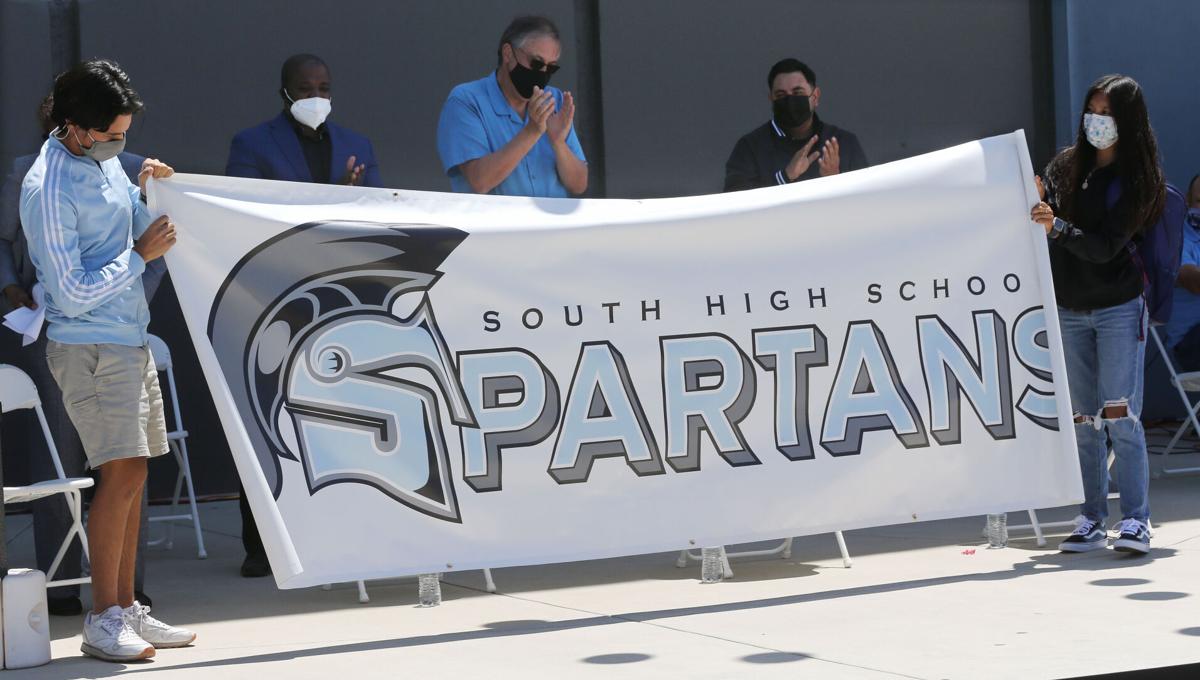 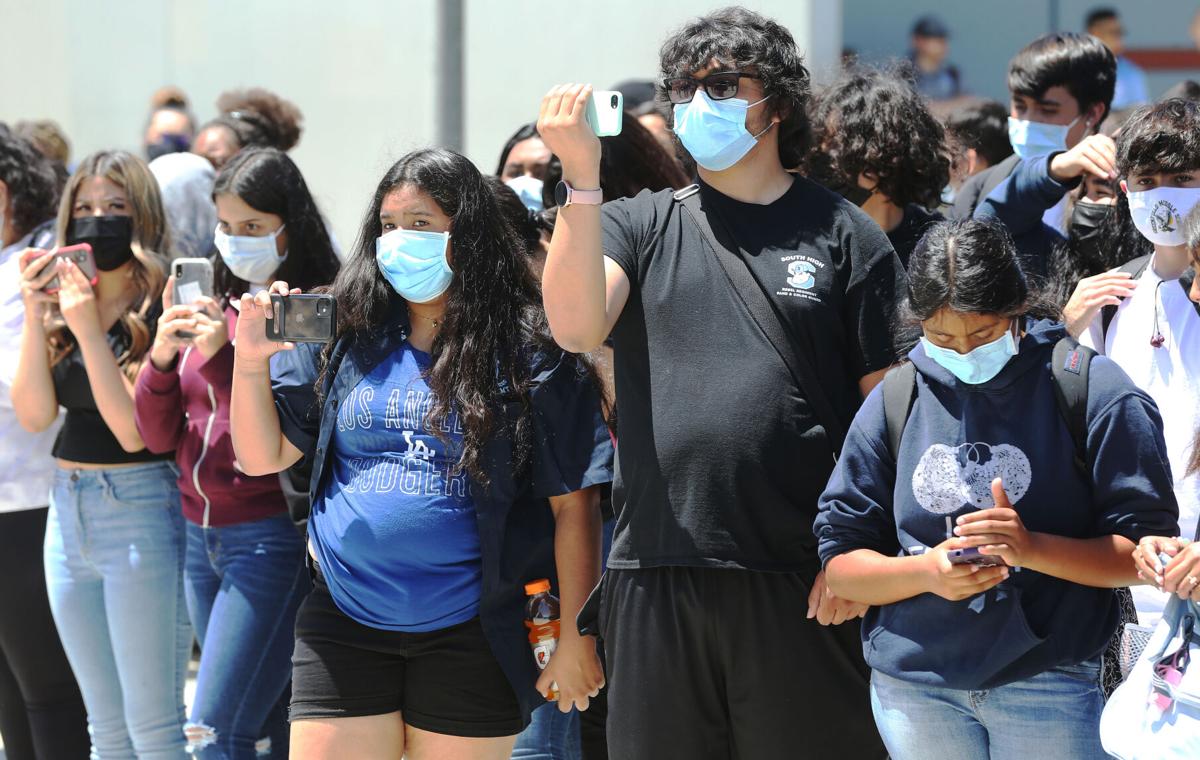 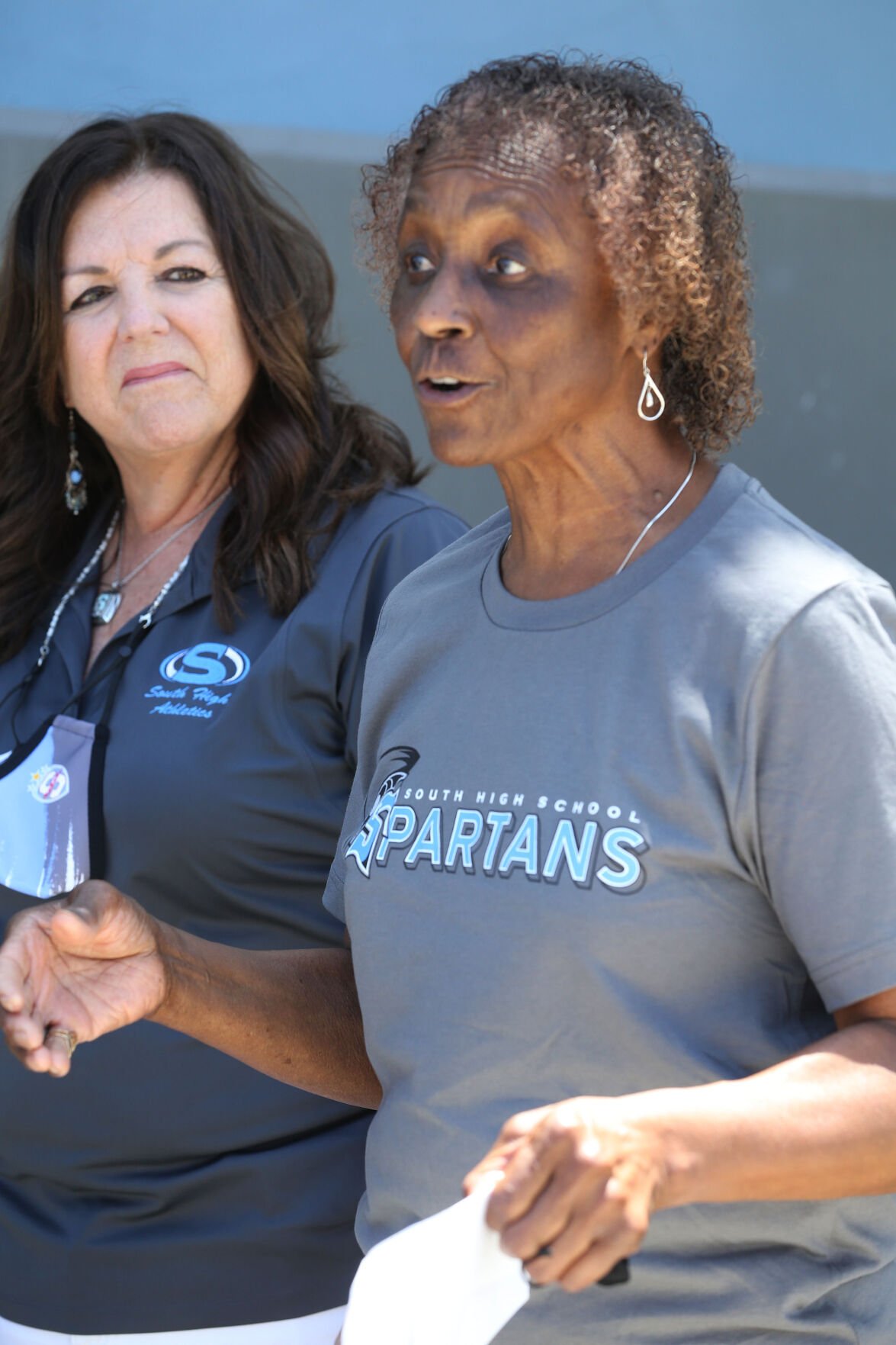 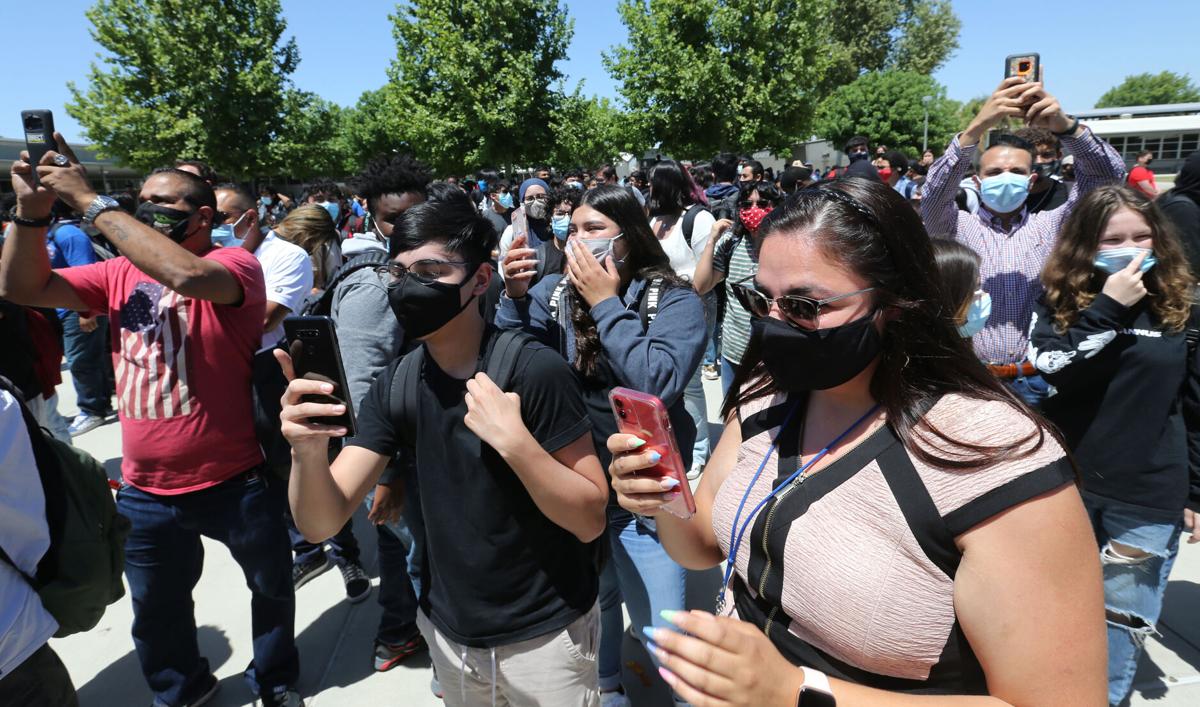 South High School administration, staff and students, along with the South High Mascot Committee, unveiled the school's new mascot before hundreds of students on Friday. South High School will retire its Rebel mascot and become the Spartans starting next school year.

Math teachers Amanda Jimerson and Gabriella Cervantes photograph themselves with students Rosely Cabrera and Bryan Moore in celebration of the new mascot. South High School administration, staff and students, along with the South High Mascot Committee, unveiled the school's new mascot in the quad area on Friday. South High School retired its Rebel mascot and celebrated by welcoming a new mascot: Spartans.

South High School administration, staff and students, along with the South High Mascot Committee, unveiled the school's new mascot before hundreds of students on Friday. South High School will retire its Rebel mascot and become the Spartans starting next school year.

There was a buzz among students at South High on Friday and it had little to do with the impending end of the school week.

Change was in the air and it felt momentous, said Anastacia Briviesca, a junior and student leader at the school.

"It's a good day," Briviesca said. "This is history and we're part of it."

The excitement culminated in cheers and applause when a new school mascot — the Spartans — was unveiled in front of hundreds of students who had gathered on the school's central lawn area when classes let out for the day. South High's long-running Rebel mascot will no longer be part of the institution's identity as of the start of the 2021-22 school year.

"We want to make sure that everybody in the community knows that Rebel is no longer a part of South High," said Fuchsia Ward, a South High alumna, former KHSD administrator and chairwoman of the committee that selected the new mascot. "We're making this name change to hopefully provide this generation of students and others along the way with an opportunity to continue their high school education, their legacy and community collaboration and involvement ... with pride, respect and loyalty. This will now be their journey."

The decision to become the Spartans was ultimately made by a committee that consisted of teachers, coaches, administrators, Briviesca and other student leaders and community members. The committee received 80 submissions for a new mascot and after a vote by the student body, the committee's decision came down to two choices: Spartans or Storm.

The new mascot becomes official in August, at the start of the new school year, said KHSD spokeswoman Erin Briscoe. Over the summer,any Rebel logos and insignia on buildings, around campus and on athletic uniforms will be replaced with ones bearing the Spartans logo, she said.

In a speech to students before the new mascot was announced, Ward, the committee chairwoman, said she was often asked by people throughout the process why South High's mascot needed to change.

An example of the new school logo was presented to the crowd as several student leaders unfurled a large banner, revealing the letter S in Spartans in the shape of the helmet of Spartan warriors in ancient Greece.

The choice of Spartans went over well with the students.

"I think it's pretty dope," said senior Nivea Rader, adding that she liked the tough imagery of the Spartan warrior. But she and fellow student Alejandro Romero, both seniors, admitted they felt less of an investment in the new mascot since they would graduate this year before the change happens.

"We're the last Rebels," she said.

"I'm glad we took that step because this school is so diverse and to have something that represents injustice and discrimination is a little contradictory," Gomez said.

About 83 percent of South High's students are Hispanic, 8 percent are African-American and 4 percent are white, according to recent California Dashboard data.

Francisco Hernandez, also a junior, said the new mascot might take some getting used to but he's pleased overall.

"I"m just happy we changed and I feel like by the end of the day I'll fall in love with the name," Hernandez said.

Some of the students said they hadn't thought much about the school mascot's roots in the Confederacy and the era of slavery, likely because the school has moved away from those associations over the years to a more generic meaning of the term rebel.

But when the school opened in 1957 and for many years thereafter, the connections were openly celebrated. The Confederate flag was part of logo design, "Dixie" was the school fight song and students dressed up as Johnny and Jody Rebel, replete with a Confederate Army uniform and ball gown.

Eventually, the Rebel became more of a scrappy guy in a baseball hat, though today even that imagery is not commonly used.

Junior Yareli Cruz, however, said she quickly made the connection between Rebels and the connection to the Confederacy when she began attending the school in ninth grade.

"The school over there is Plantation," she said, motioning toward a nearby elementary school. "It kind of clicked. And I would see pictures of how they flew the Confederate flag (at South High). I already knew this had to change."

The theme continues on surrounding streets, which are named after Confederate figures, battles and warships — Fambrough, Merrimac, Sumter, Monitor and Shenandoah.

Coleman said in an effort to rebrand the Rebels image, she has students do a project each year called Rebel for Change, where students select someone from history who was a rebel but fought for a good cause.

At the start of the assembly, Principal Connie Grumling recited a quote by Coretta Scott King.

"The greatness of a community is most accurately measured by the compassionate actions of its members," she said.

The change in mascots represented a shift that students at the school had advocated for over eight decades, going back to the 1960s, said Geovanny Renteria, another South High student leader.

South High has made it official: It is now accepting suggestions from the community to replace its Rebel mascot, a Confederate icon.