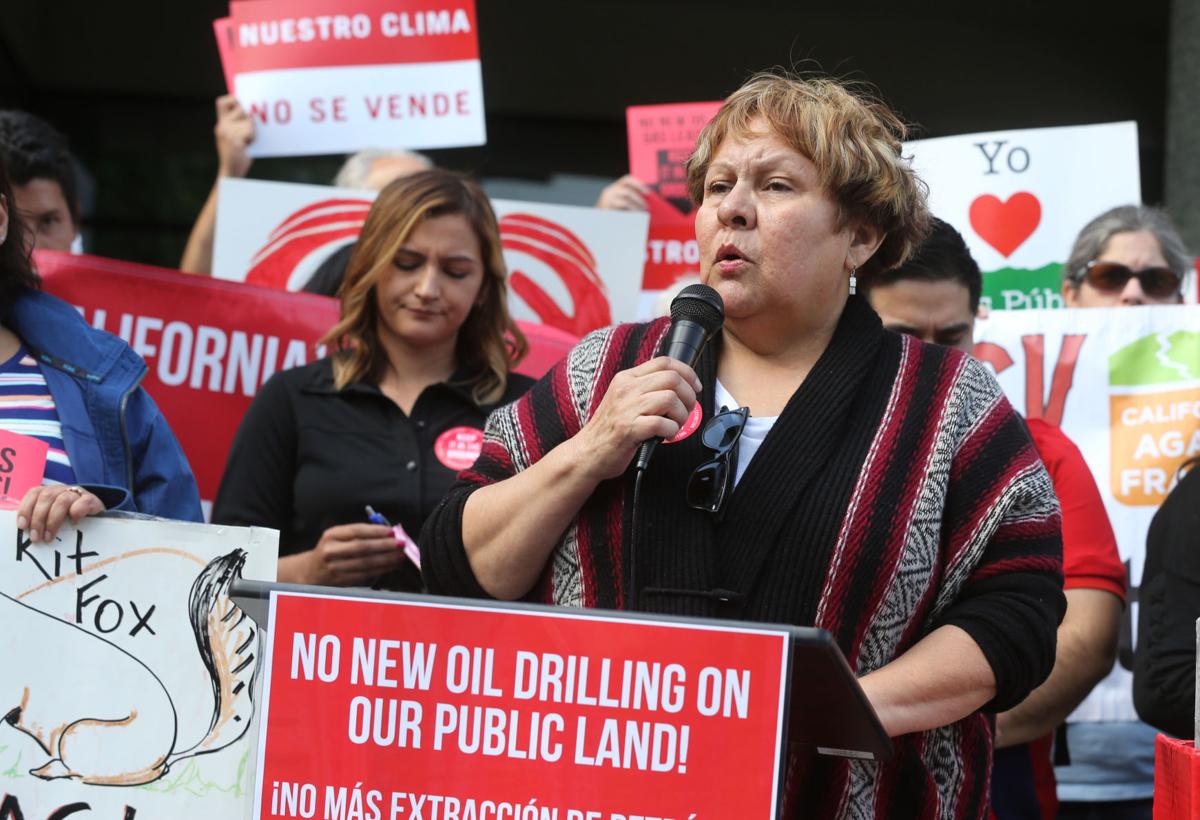 Rosanna Esparza speaks on behalf of a group of environmental activists gathered outside the Kern County Administrative Office in May. The group made a showing at a Bakersfield hearing to receive public comments on a plan to reopen federal land in California to oil production, including the use of fracking. 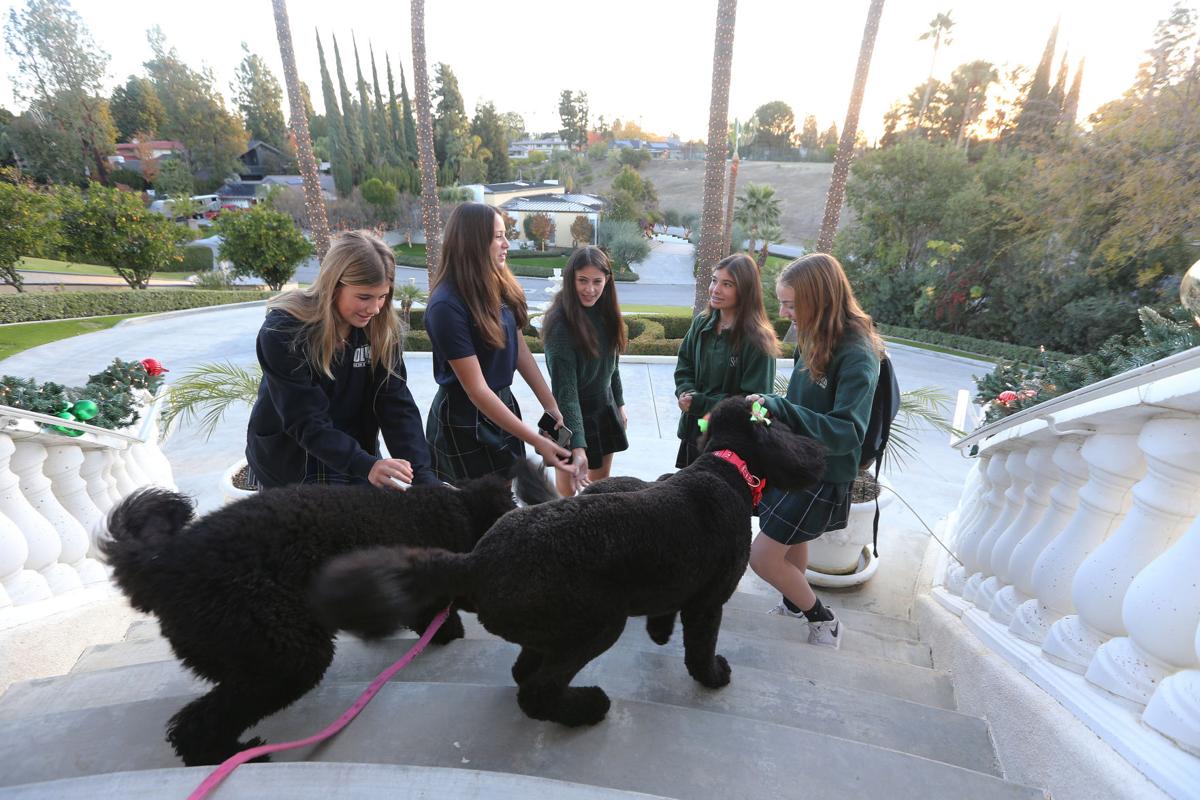 Rosanna Esparza speaks on behalf of a group of environmental activists gathered outside the Kern County Administrative Office in May. The group made a showing at a Bakersfield hearing to receive public comments on a plan to reopen federal land in California to oil production, including the use of fracking.

Reader: I’d like to hear the environmental justice groups explain how their reckless actions and baseless comments have led to countless job losses that are devastating Kern ("Environmental justice activists want seat at table in Kern, state's oil debate," Dec. 13). Please come testify and tell us your make-believe facts. Please explain how we’ll replace this valuable resource and your plans for a better future.

No industry in Kern County more than oil transforms people from poverty to wealth, pays more taxes and contributes more to their community. This hearing is for industry surrounding an economic topic. Way to stir the pot and divert, (reporter John) Cox.

Price: These activists have made it known to both Cox and county officials that they intend to weigh in on this debate. How is reporting that fact stirring the pot? Cox would have been remiss not to. I'm guessing even you, Chad, found the news useful, if distasteful.

Newsom reiterated that position last month when he announced a three-prong approach to expand his crackdown on the state's oil industry. He said the state will consider new protections for people living near production sites.

You're biting the messenger again, Chad.

Reader: I read with interest your bit on Bakersfield Country Club and wanted to add a little to it ("Where We Live: Rejected, they started their own club, and its neighborhood still thrives," Dec. 8).

Robert “Babe” Lazane had a longer history with golf and Bakersfield than just BCC. During the 1930s, he and his brother A.J. (Tony) Lazane operated a miniature golf course at the corner of 28th and Eye streets in Bakersfield. In 1940, Babe took over as pro of the recently leased-by-the-county Kern River Country Club. The county of Kern bought that facility in 1944.

Babe was the pro there until late 1941, when he joined the United States Coast Guard. Following the war, he returned to Bakersfield with the opening of BCC.

I like this series and hope the new folks keep it.

Price: Thanks, Randy. I'll keep writing "Where We Live" articles for as long as I can stand it.

Reader: In addition to the only residence in Kern County designed by the well-known architect Frank Lloyd Wright, the Bakersfield Country Club neighborhood has a number of serious expressions of period design by local masters including David Gardner Cross, Jack Hayslett, Whitney Biggar, and Eddy and Paynter, among others. My hope is they don’t fall victim to the tasteless greed of buyers who, as in other communities, have bought up well designed examples of period architecture only to badly remuddle or replace them with extravagant tacky “McMansions” that appear to have as their sole purpose to express the wealth (“Look at what I can afford”) of their owners.

Several years ago, while we were at dinner at my brother’s home in that neighborhood, burglars hit the houses on both sides of his and one across the street. Response by the sheriff’s department was slow and ineffective.

It took weeks of complaining by residents, a repeat pattern of incidents and help from 3rd District Supervisor Mike Maggard before the gang responsible was finally busted.

That said, proposals for BCC to be annexed by the city are based on sound, well-considered urban planning values and consideration of the related costs of civic resource administration. The reasons for remaining unincorporated are based on emotion, fantasies, false notions and fear of change. People who can afford to live there should well have the judgment to see the correct path to follow even if they do think they live in a fortress that doesn’t need police. That kind of “it’s all about me” reasoning is simply not helpful.

Reader: As a lifelong resident of the Bakersfield Country Club square mile, I very much enjoyed your Dec. 8 "Where We Life" column. Also, as the owner of the very last unbuilt lot on the golf course, I very much appreciate your concluding comments.

Price: Thank you for holding on to it for me all this time.

Reader: Dear “arrogant, condescending, myopic, and ill-informed” columnist (per the lead letter in your Dec. 7 Sound Off): Keep up the important work of giving us ruminants something to chew on.

Price: Ruminant: an even-toed ungulate mammal that chews the cud regurgitated from its rumen. The ruminants comprise the cattle, sheep, antelopes, deer, giraffes and their relatives. I had to look it up. Let's eat!

Reader: Mr. Price, you should look up your history before writing an article on east Bakersfield ("Where We Live: History and great food abound in Baker Street corridor," March 24). My grandfather started the original Arizona Cafe and it was located on East 21st Street, just off Baker Street. There was the Pyrenees Bakery, Maison Jaussaud and my grandfather's Arizona Cafe. He catered to the migrant farmworkers who were picked up every morning by labor trucks and taken out to the fields. The original neon sign is on display at Narducci's. My mother, Tula Marantos, worked there before going to work at Luigi's. She worked in the bar at Luigi's for more than 40 years.

Thank you for your articles on east Bakersfield.

Price: Thanks for the additional information. My brief history of the Arizona Cafe began in 1973, when current owner Jose Ramirez started working there as a dishwasher. I didn't include much about its 1953 origins.

Reader: I'm reading your Dec. 10 paper and I see a nice picture of Centennial High School winning the ”We the People" championship for the 23rd Congressional District. Why not a photo of Arvin High School for winning in the 21st District?

Price: One reason is that Centennial won the overall competition, and therefore qualifies for the state tournament. Of course, Arvin will likely will get a so-called wildcard spot and still get to go to state, like it always does.

Trust me, we love Arvin around here, with one of our editors volunteering to drill the school’s “We the People” team over the years. But Centennial won, plain and simple.

Some will argue, correctly, that we have previously used the best photo available, which may not necessarily be of the winning team in a given academic contest. In this case, though, we had to rely on a press release and a photo provided by event organizers, and a Centennial team photo was what they sent.

Congratulations to both teams!

Reader: In preparing to retire as the city of Bakersfield's solid waste director at the end of this month, I recall a lot of stuff from my 25-year run here. One of them is how you, Bob, as a reporter back 1995, ran some very helpful color maps showing where and how we were switching from old manual trash cans to the new automated carts.

I also remember how, right after that, when you were using the crosswalk in front of my car at Truxtun Avenue and Eye Street, I yelled thanks out the window and then you walked over and hit me up for your golf fundraiser. I don’t know if I ever told you, but I’m not a golfer but I was glad I went.

By the way, my dog loves to run out and fetch the paper when it hits the driveway each morning. Keep up to good work.

Another great "Sound Off" column, Bob. Kudos for the continuance of a great tradition.