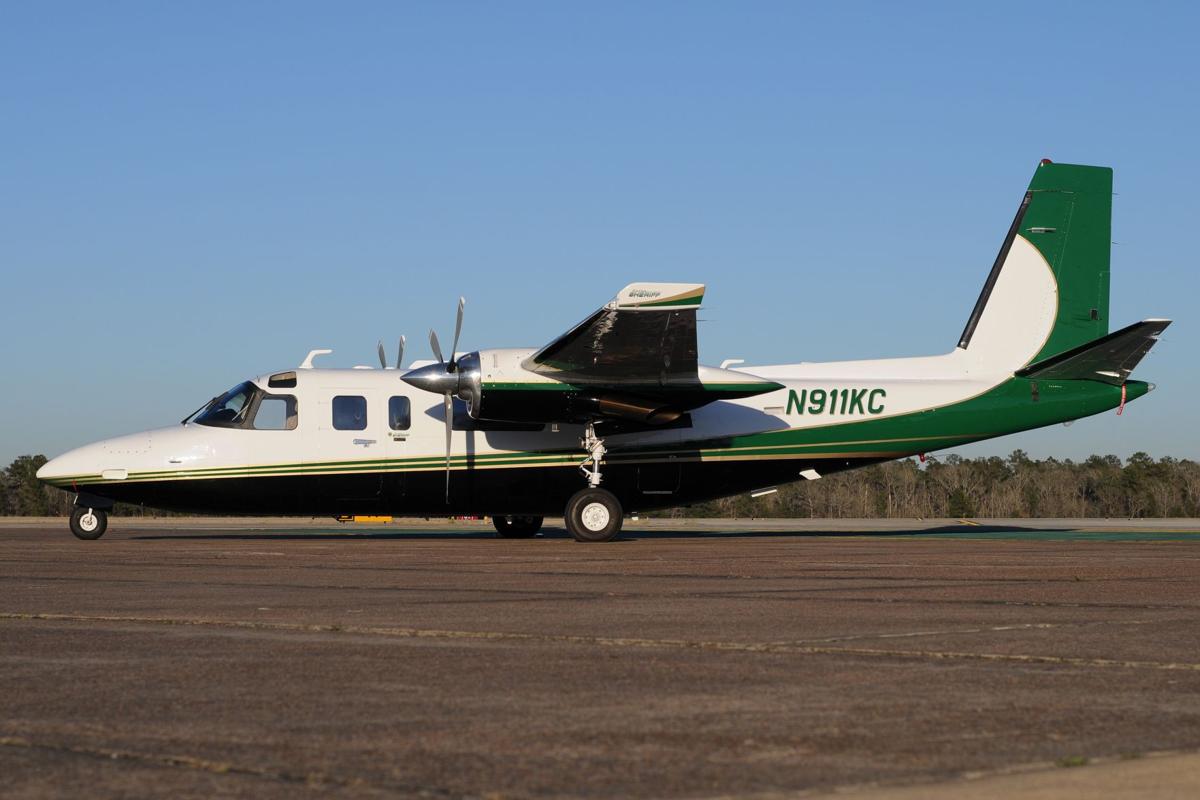 The Kern County Sheriff’s Office has a twin-propeller, business-class airplane to shuttle dignitaries around the state, fly detectives to distant interviews and move subjects to Kern County from other jurisdictions. 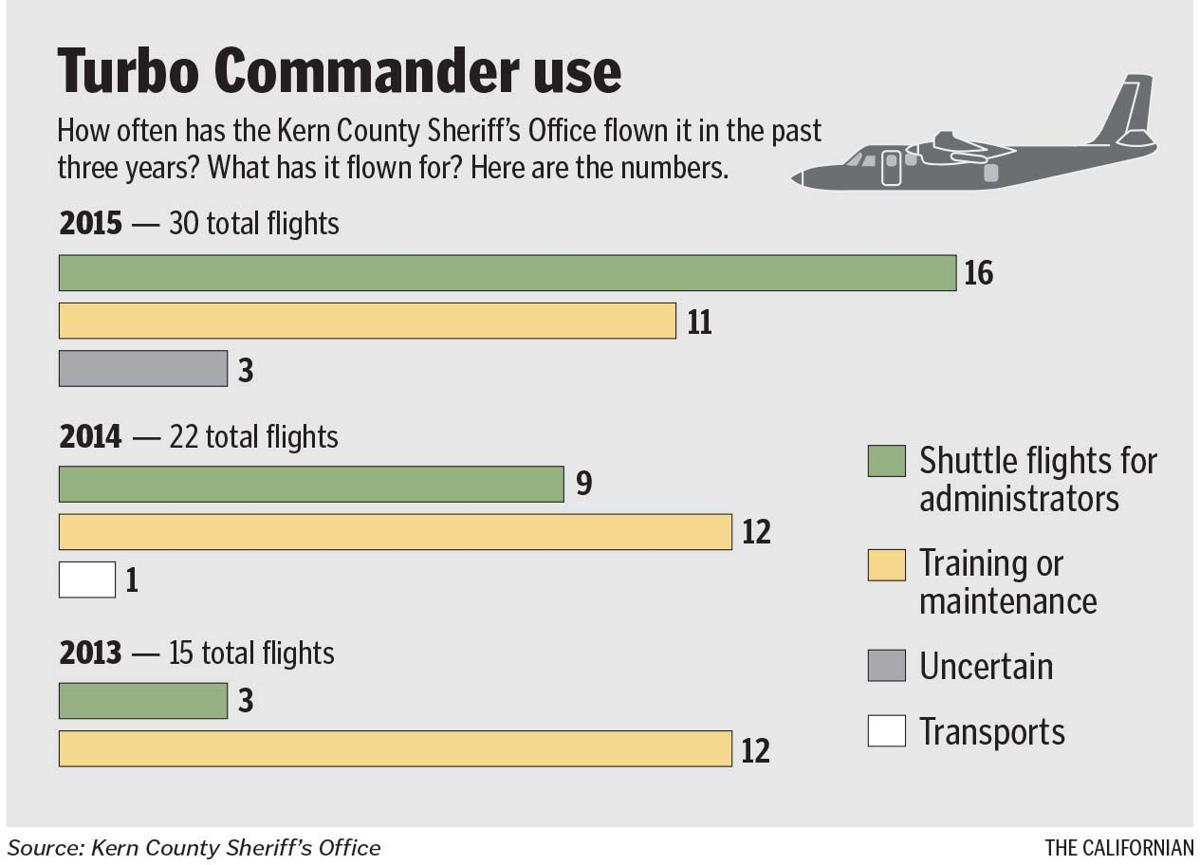 The Kern County Sheriff’s Office has a twin-propeller, business-class airplane to shuttle dignitaries around the state, fly detectives to distant interviews and move subjects to Kern County from other jurisdictions.

They call it the Turbo Commander.

It’s a twin-propeller, business-class airplane flying under the N911KC aircraft number that the Kern County Sheriff’s Office uses to shuttle dignitaries around the state, fly detectives to distant interviews and bus suspects and warrant subjects to Kern County from other jurisdictions.

And it has become a symbol of the budget battle between the Kern County Administrative Office and county public safety agencies.

On Aug. 30, County Administrative Officer John Nilon brought the Turbo Commander up in a Board of Supervisors meeting – using it as an example of things supervisors might want to look at when they develop a comprehensive plan to save money.

Nilon referenced some earlier statements by Kern County Sheriff Donny Youngblood and extrapolated – incorrectly – that the plane cost $80,000 for the county to maintain every year but only flew a couple of times a year.

Youngblood immediately blasted Nilon for the reference, saying Nilon’s inaccurate depiction of the plane’s uses had eroded his trust in the office, which is the primary source of budget advice to supervisors.

“What we have in this county is a trust issue. It isn’t just the public mistrusting our government. We don’t trust ourselves. I don’t trust this CAO,” Youngblood said at that meeting.

The exchange presents the question: What does Youngblood do with the plane?

There are a lot of maintenance and pilot training flights as well.

The Californian requested the flight records for the Turbo Commander from 2012 – when the Sheriff’s Office took over the plane from the Kern County Fire Department – to mid-2016.

The records lean more toward recording flight distances and maintenance problems with the plane. But information about where the plane went and who was riding in it are included as well. Older forms sometimes conveyed passenger information on an attached Post-it note.

What the forms don’t show are things like who authorized the flight, the reason for the flight and the time of the flights.

Youngblood said he is the only one now allowed to approve a flight.

“All flights are approved by me now on that airplane,” he said.

And other information about the flight should be public and might be good to be included on the flight form, he said.

“I have no problem outlining what the flight is for. It should be no secret who’s on the airplane,” Youngblood said, adding that if the information isn’t there “in the future it should be added.”

The Californian asked for details about where flights were going and their purpose. Here’s what the Sheriff’s Office told us.

Sacramento is the most common destination for the plane.

The most typical passengers are the Kern County sheriff’s deputies who fly the plane and pilot other Sheriff’s Office planes and helicopters.

On one occasion he took his girlfriend along, something he said county policy allows. She also could have come along if he had driven to the meeting in a car, Youngblood said.

Wahl and Castaneda attended “Seconds in Command” meetings – meetings that were similar to those Youngblood was attending.

Gleason flew to a water meeting in Ridgecrest with his staff and county administrative staffers.

The Turbo Commander will be completely paid off after the final lease payment of $357,403 is paid this month.

But the annual cost to fly the plane will remain.

To handle all that air travel, the Sheriff’s Office budgeted $63,126 in flight and maintenance costs in the 2015-16 fiscal year.

“We have $80,000 budgeted for that airplane,” Youngblood said of the current budget.

That doesn’t include the cost for maintenance staff and pilot time.

Flying the Turbo Commander is not a full-time job, the Sheriff’s Office stated in written responses to earlier inquiries about the plane.

The total cost of the sheriff’s air support unit — including all three of its fixed-wing aircraft and its helicopter fleet — is $4.1 million a year. (The other aircraft are used for surveillance and, more often, prisoner transport.)

Youngblood said he is committed to paying for the ongoing flight and maintenance costs of the Turbo Commander — as much as possible — out of asset forfeiture funds received by the county when it liquidates property owned by convicted criminals.

So do these flights benefit the county, especially given its dire budget situation?

Kern County supervisors are calling for a comprehensive investigation of all county departments’ organizational structures as they expect to see even deeper cuts to county operations over the next three years.

Nilon suggested supervisors look toward things like the sheriff’s public air force as a way to save.

But making specific cuts to the sheriff’s operations is difficult because, as an elected official, Youngblood has control over how he spends the funds supervisors give him.

Youngblood said it’s his call on when and why to use the plane.

“It’s my job to decide what to do – not the newspaper’s,” Youngblood said.

To him, he said, the true value of the Turbo Commander – and the Sheriff’s Office’s two other fixed-wing aircraft – should be measured in time, not dollars.

Driving to Northern California for a meeting, he said, would put him out of commission for at least one extra day on either side of the event he’s attending.

The plane puts him back on the job in Bakersfield much, much faster, he argued.

When he sends deputies to interview a crime suspect somewhere else in the state, he said, he wants them back in town fast, too.

“It’s not just about money, it’s about time,” he said. “I don’t want my homicide detectives out of town for three days.”

He has his own plane, which he uses to travel between his home in Ridgecrest and his office in Bakersfield.

Gleason only rode in the Turbo Commander once — to travel from Bakersfield to a water meeting in Ridgecrest.

He said the plane is “in top-quality shape” and made the whole trip in the time it would take his small plane to climb to proper altitude to make it over the Sierra Nevada Mountains.

Youngblood, he said, cannot scrimp on maintenance or pilot training for the Turbo Commander because he’s carrying passengers.

The pilot has an innocent life in his or her hands and needs to ensure that passenger’s safe travel.

“You need to deliver that safety. That takes money,” Gleason said. “I had a feeling of absolute certainty that I would be carried safely from point A to point B.”

Whether to offer that flight to the passenger, he said, is Youngblood’s decision.

Youngblood's significant other - One round-trip.

Here are some of the most notable trips the Kern County Sheriff's Office turbo commander has taken in the past several years.

Sheriff Donny Youngblood traveled to Sacramento for a meeting.

The plane flew Undersheriff Rosemary Wahl to San Diego for a "Seconds in Command" meeting - a subset of the California State Sheriffs' Association for Sheriff departments’ second tier leaders. It then flew back to Bakersfield.

The plane flew back to San Diego to pick Undersheriff Wahl up.

The plane flew two Sheriff's staff to Reno, Nevada for an Off Highway Vehicle grant meeting.

Four top Sheriff's staff were flown to Sacramento for a meeting on funding for new jail construction being planned with funding from AB900.

Three Sheriff's staff flew from Bakersfield to Needles, Arizona, St. George Utah and Henderson Nevada and back to Bakersfield to "exercise" the airplane and its pilot after a more than one month period of inactivity.

Undersheriff Rosemary Wahl and Chief Shelly Castaneda were dropped off and picked up from the Truckee Airport near Lake Tahoe for a Seconds in Command meeting.

The turbo commander flew Sheriff Donny Youngblood and his girlfriend to the municipal airport in Redding on Aug. 18 so they could attend the California State Sheriff’s Association Board of Directors meeting in Mt. Shasta. The plane returned on Aug. 21 to pick the pair up.

Deputy C.J. Martin, the Turbo Commander's primary pilot, and Sr. Deputy Bob Riggs took off in the "late afternoon" from Indianapolis following a maintenance visit. They were forced to stop for the night in Aspen, Colorado by safety concerns and a storm in the southern Rocky Mountains. They took off for Bakersfield the next morning and were once again stopped in North Las Vegas where they had to wait out a storm over Bakersfield.