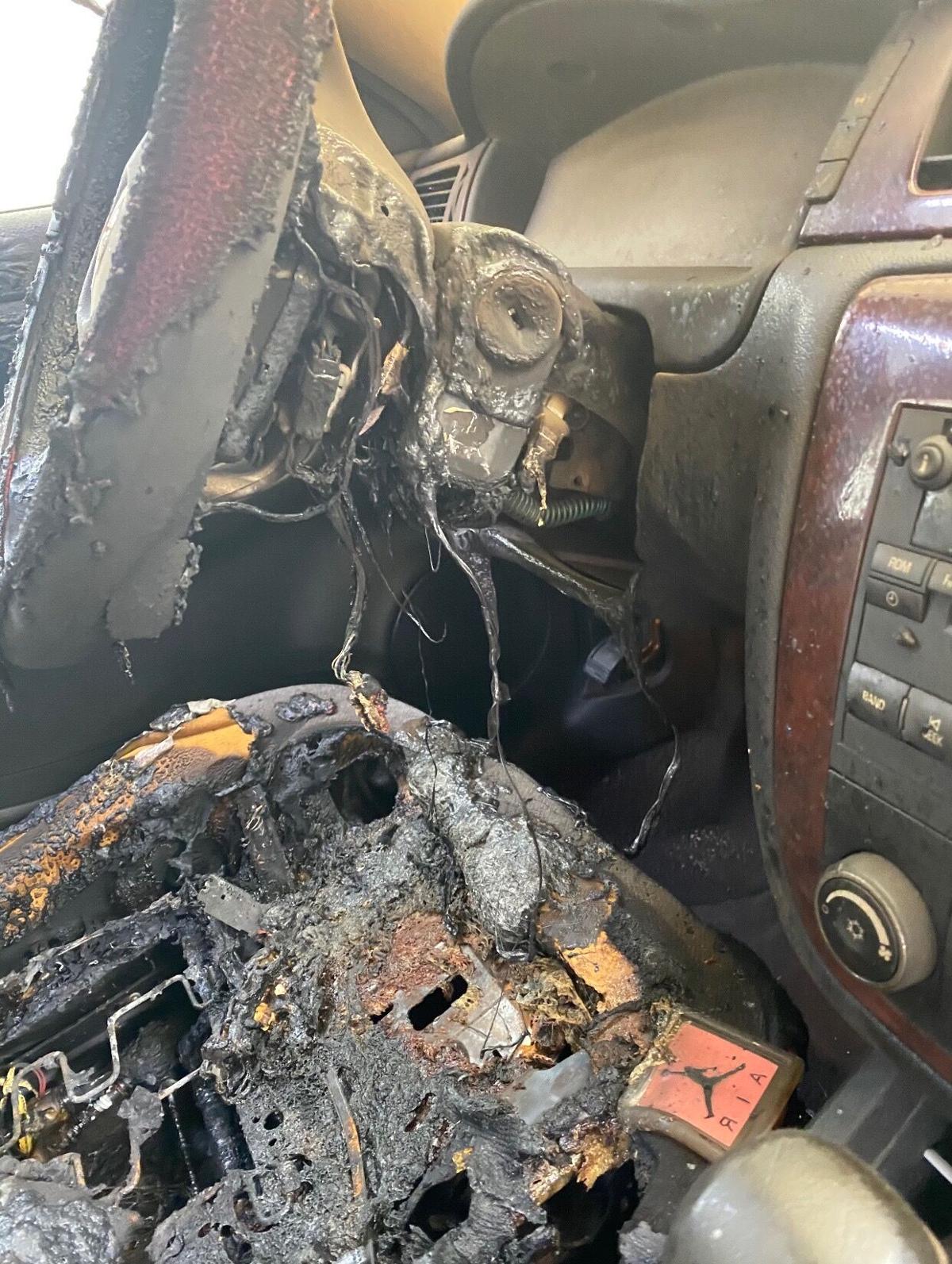 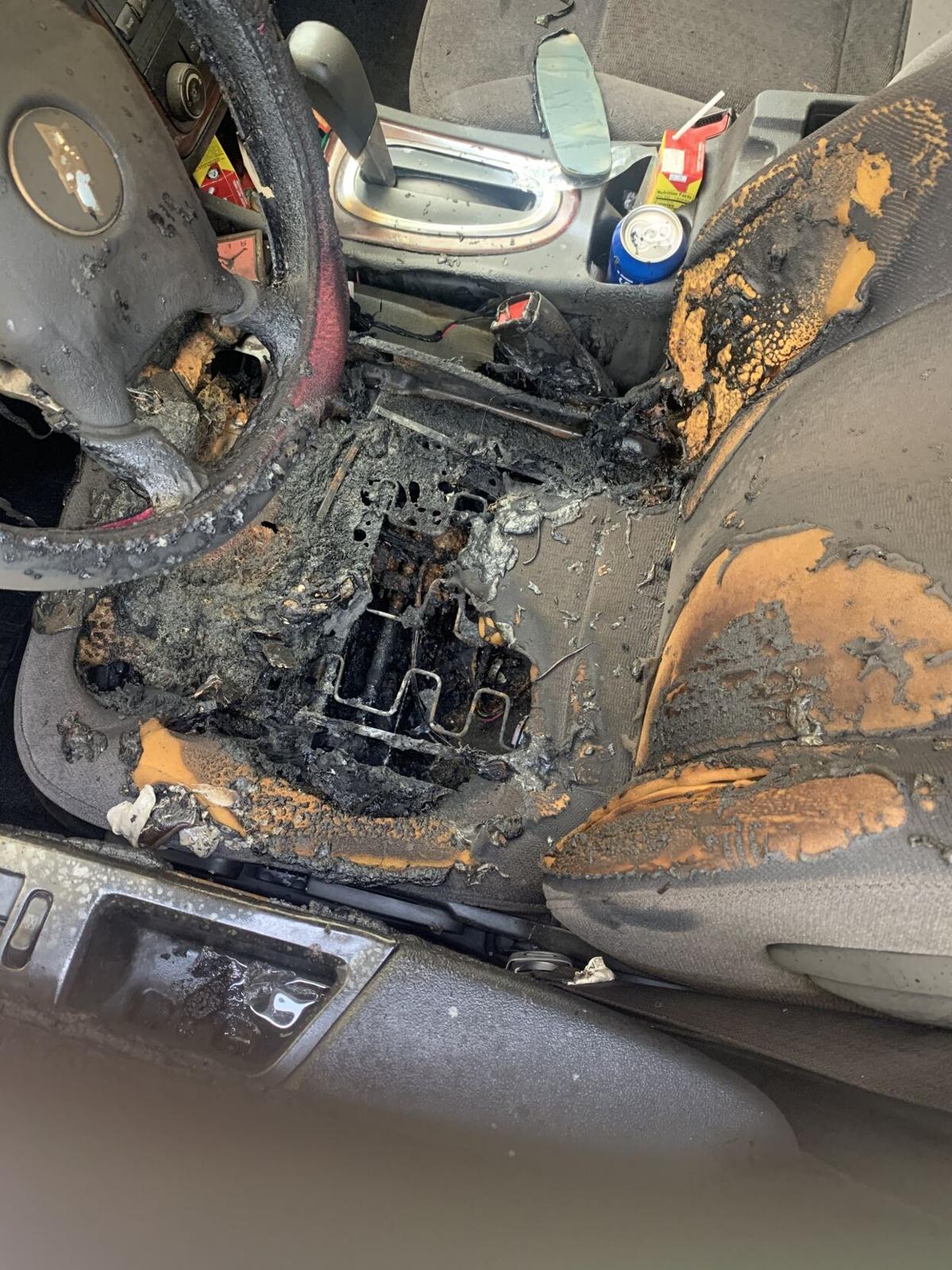 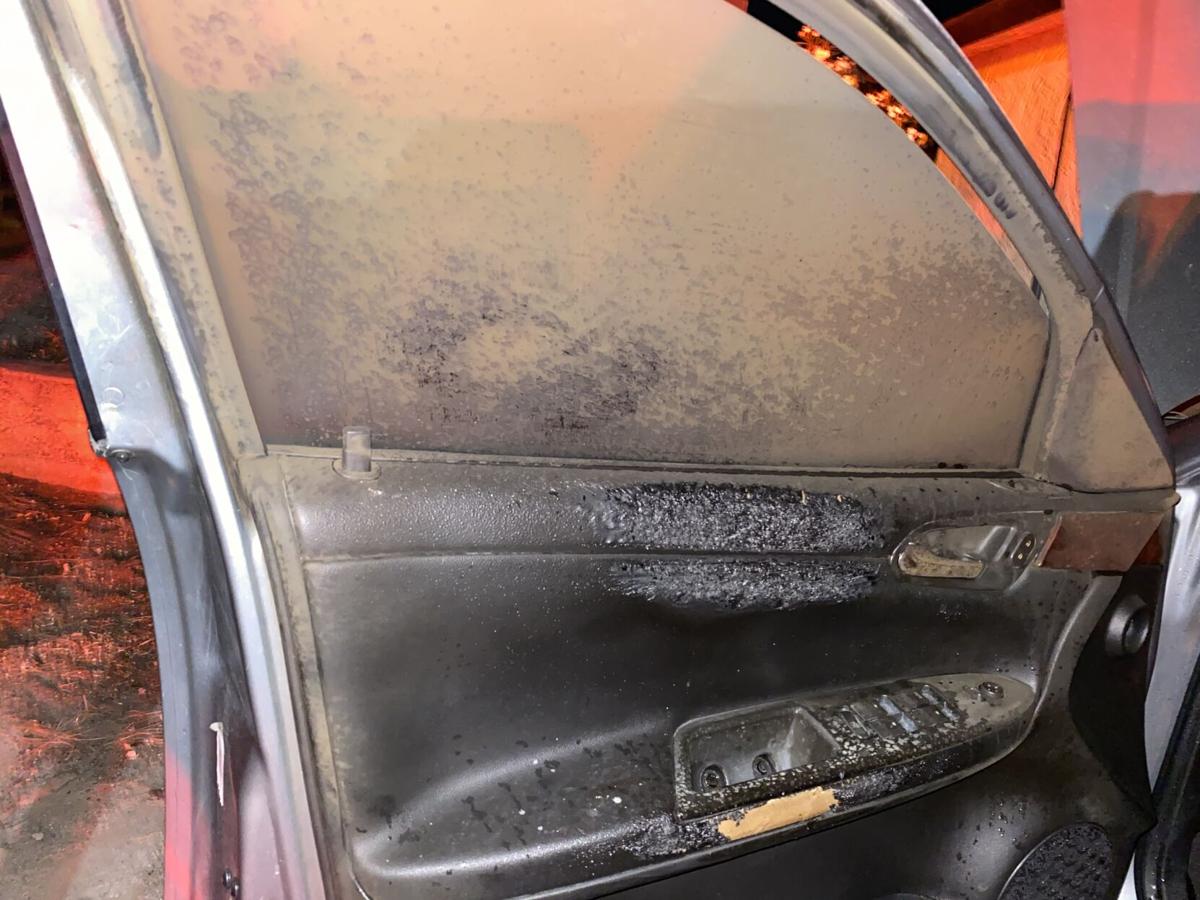 Image of the interior window of Vonesha Harris' car.

Image of the interior window of Vonesha Harris' car.

The day after Vonnesha Harris participated in a peaceful protest in downtown Bakersfield, she emerged from her apartment in east Bakersfield to discover her car was on fire.

Harris, 20, said the last time she saw her car in one piece was when she had been sitting in it writing music Monday evening. She eventually left and 20 minutes later a neighbor knocked on her door about 9 p.m. to let her and her family know about a burning vehicle outside.

When Harris stepped outside, she said, she saw her car was in flames.

Once the fire had subsided, Harris said she discovered on the door hateful phrases related to her race and the Black Lives Matter movement. Practically the only word on her car that was suitable for publication was “die.”

“I don’t know if people want me to know to not protest, or that they want to do something to me,” she said, adding that somebody would need to know exactly where she lived to find her car in its parking spot. She hadn't seen anyone following her, which she said made everything scarier. “I don’t know if I should feel threatened or not because I don’t know what this was, what this was intended to do.”

The incident opens up the possibility that some of the protesters who have demonstrated in downtown Bakersfield over the last four days could face retaliation for their actions. The Kern County Fire Department is conducting an arson investigation into the fire. Sheriff’s Lt. Joel Swanson said both the KCFD and the Sheriff’s Office had contributed to a report on what happened Monday night.

“(The fire) just made me realize that all of this is real,” Harris said. “We see this happen in bigger cities and bigger states, and we’re just a little small town. Now we know that we have these types of people out here that will do this to us.”

On Sunday, Harris spoke to The Californian about her desire to participate in a peaceful protest, saying she disapproved of the vandalism that had taken place downtown but wanted to speak up about the injustices she sees in America. But on Tuesday, she said she would pull back from participating in the ongoing protests, concerned over the safety of herself and her family.

“I don’t think I’m going to go back to the protests if this is what we’re going to get for speaking up in our community and trying to go after justice,” she said.

Still, a silver lining emerged following the fire. Harris said many people in the community had reached out to her in support. A GoFundMe page dedicated to raising money to help Harris buy a new car quickly gained traction online Tuesday.

Because her car was uninsured at the time of its destruction, Harris said the money would be put to good use. She said she worked hard to be able to afford the car, a 2009 Chevy Impala, and she didn’t think it should be taken away from her because she spoke up.

She added that she was overwhelmed with the support and said she’s just hoping to be able to drive to her minimum-wage job.

“Anything will help me,” she said, adding even money for a bus pass would be helpful. “I don’t need anything extravagant. I just need a car to drive me to work.”

When a person truly BELIEVES in a CAUSE, nothing should stand in their way to exercise their right to FREE SPEECH, etc. That said, if she is worried about her car, she can get a ride or take the bus to the next event of her choice. If she is worried for her life and her personal safety...she should take steps to keep herself safe and never go out alone. If she chooses to stay home...that's fine too. But it certainly does give the enemy a lot more power over the person who chooses to protest and demonstrate in a peaceful manner. It's. a shame her car was vandalized. Perhaps the Police have a fund to assist her because it appears that she has been a victim of a violent act. Maybe the DA knows more about it. I hope she calls them ASAP.

Does she have any evidence her participation in the protest is related to the arson? Kind of a big jump there. Maybe it was one of the vandals who damaged the Battlefield Police Department. Or an ex boyfriend, or girlfriend. Kinda odd she first thought of her part in a protest as the cause.

Thanks AGAIN to Sam for AGAIN hyping up & exacerbating, what I believe will be learned is, a personal dispute and/or a self-inflicted scam. Of ALL the people who attended the local protest, THIS ONE PERSON, had their car burned w/ SUPPOSED (no proof presented) racial/political insults painted in it. As the BFD & BPD do their investigation, I hope they START w/ the owner & her agenda. During these current riots and aggravated protests, it has become clear that their leaders, for lack of a nicer term, are the actual instigators of their own misery & callousness for the purposes of hyping up & inciting MORE violence. If you know Morgan’s past stories AND understand the tactics of these supposed aggrieved protesters then you would take this story w/ a VERY fine grain of salt.

Or, she could have done it herself just like Jussie Smollett.

See how you can speculate when you don't have any facts?

What ??? Really ??? Oh, if this goes unpunished then no one but Bakersfield police are responsible. Cameras all over town know exactly who did this.

Want federal to get involved ?

You watch too much Investigation Discovery channel. You're right that there are cameras everywhere, but you're assuming they're all working and aimed toward her car. The feds have bigger fish.

But do know city has ability to check cameras within radius of her location for that time slot.

It's called accountability. If local depts. want positive publicity then follow thru on this situation ( no matter out-come ) is important.

Have you noticed there hasn't been another word about this "arson" since it was first reported? The GoFundMe has been taken down. Perhaps they did check all the surrounding cameras. Maybe, just maybe they have found the arsonist.

My mistake. There was no GoFundMe yesterday. There are two up today.

So, protesting peacefully is a stupid game to you? Actually, I'm not surprised. I believe too many people in Bakersfield feel as you do.

Well, it sounds like you would know about stupid.