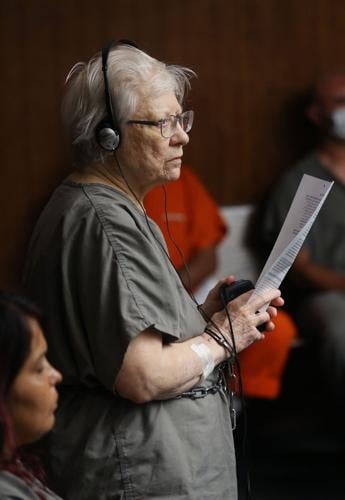 Sandra Bonertz, 76, pleaded not guilty to one count of first-degree murder at her arraignment in Kern County Superior Court in July 2021. 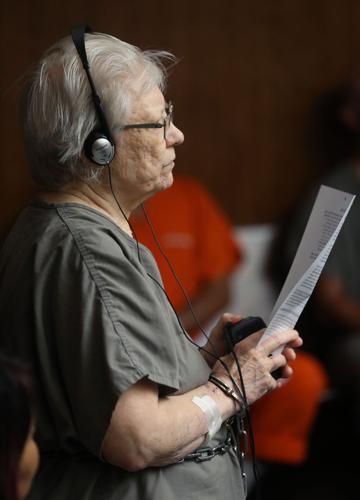 Sandra Bonertz, 76, pleaded not guilty to one count of first-degree murder at her arraignment in Kern County Superior Court in July 2021.

But the improbable happened Tuesday afternoon in Kern County Superior Court when Sandra Jeannett Bonertz, 76, pleaded not guilty to a single count of first-degree murder in the shooting death of her roommate at the Pinewood Glen Retirement Community in southwest Bakersfield.

In a courtroom crowded with criminal defendants waiting to be arraigned, Bonertz was easy to spot. With her shock of white hair and grandmotherly demeanor, she seemed confused and out of place in her gray jail smock, leg irons and handcuffs. A pad or bandage was taped to her inside-right upper wrist.

When Judge Michael Bush called her name, Bonertz didn't respond — until a uniformed bailiff supplied her with a portable headset to help her hear the proceedings.

Within seconds, it was over. Her plea of not guilty was on the record, her next hearing set for early next month, and Bush's assertion that she will remain behind bars was made clear.

"You will be held without bail due to the nature of the charges," Bush told the accused.

The investigation began Sunday morning when officers with the Bakersfield Police Department were called to the retirement community at 2221 South Real Road to check the welfare of a resident.

According to a BPD news release and a department spokesman, police found a woman with major injuries lying dead on the floor inside one of the rooms.

Bonertz, the victim's roommate, made spontaneous statements indicating her involvement in the shooting, police said. Bonertz was still armed with the gun, but surrendered it without incident.

Police declined to release any details about what type of firearm was used in the killing.

Officers determined the roommate's death had occurred sometime during the previous evening.

In the BPD news release, police described Bonertz as "very cooperative with the investigation" and said no other suspects were sought. She was booked into Kern County Jail on Sunday.

As of Tuesday evening, the victim's identity had not been released by the Kern County Coroner's Office.

The Pinewood Glen Retirement Community website describes it as an independent living center for seniors age 55 and older. The community is made up of 99 private units with studios, one-bedroom units and double units.

The complex is operated by the Housing Authority of the County of Kern, and the agency released a statement in response to the incident.

"It is with great sadness that we learned of the passing of a resident at Pinewood Glen on Sunday," the statement read. "According to police, this was an instance of domestic violence. Pinewood Glen has a strict policy prohibiting weapons at the property."

A police spokesman Tuesday said investigators have not characterized the incident as domestic violence.

Outside the courtroom following Tuesday's arraignment, a woman who identified herself as a longtime friend of both Bonertz and the victim suggested the death may have been a mercy killing.

"I came here today to support Sandy and to let her know somebody was on her side," said Cheryl Sperry.

"I've known both of them for eight years and they were the purest of friends," she said of the accused shooter and the deceased.

"They did everything for each other. They never fought."

Fighting back tears, Sperry spoke of her friends as incapable of turning hate or rage upon one another.

The deceased, she said, had long expressed the desire to not live life longer than her ability to enjoy it. An auto accident, Sperry said, had left her unable to walk, and in pain, and lack of medical care had made things worse.

"I don't think there was any malice, or anything like that," she said.

The Kern County coroner's office released the name of the 83-year-old woman who was found dead at Pinewood Glen Retirement Community on July 11.