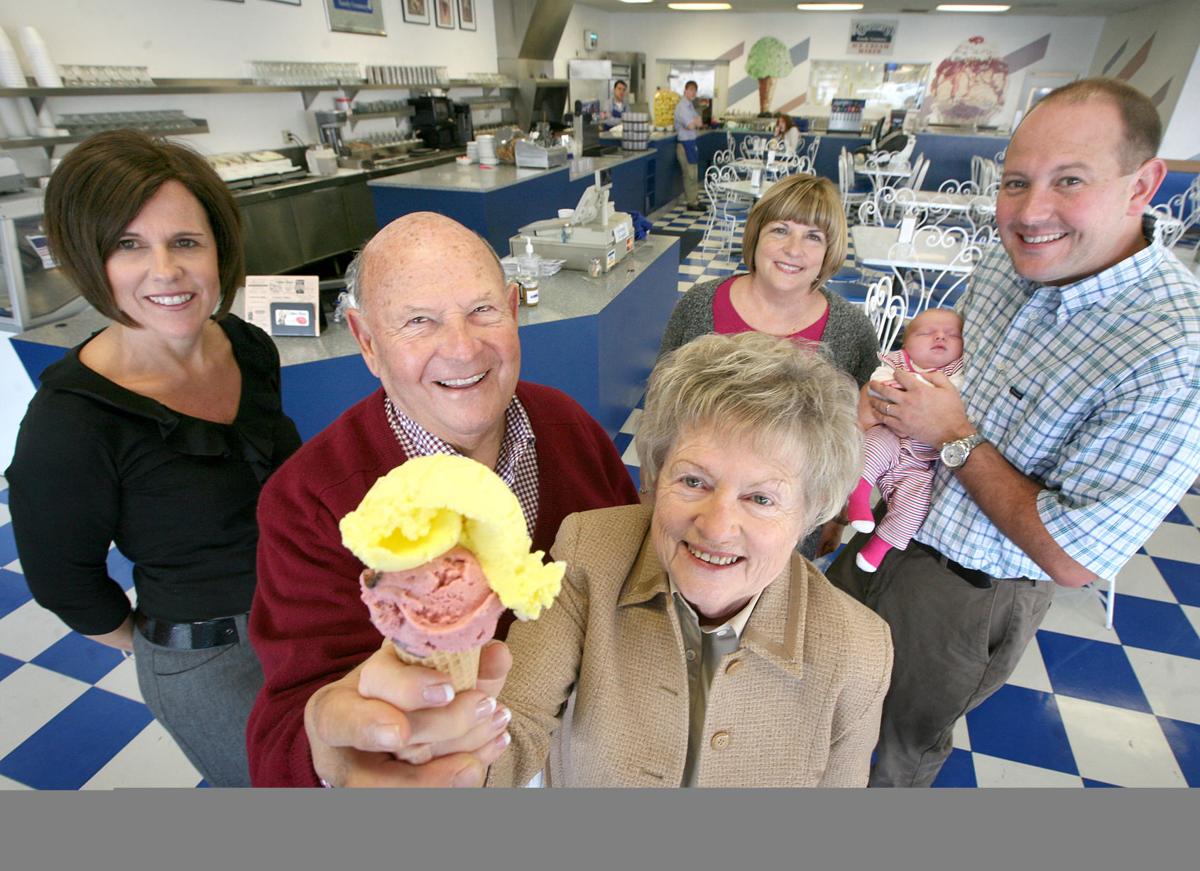 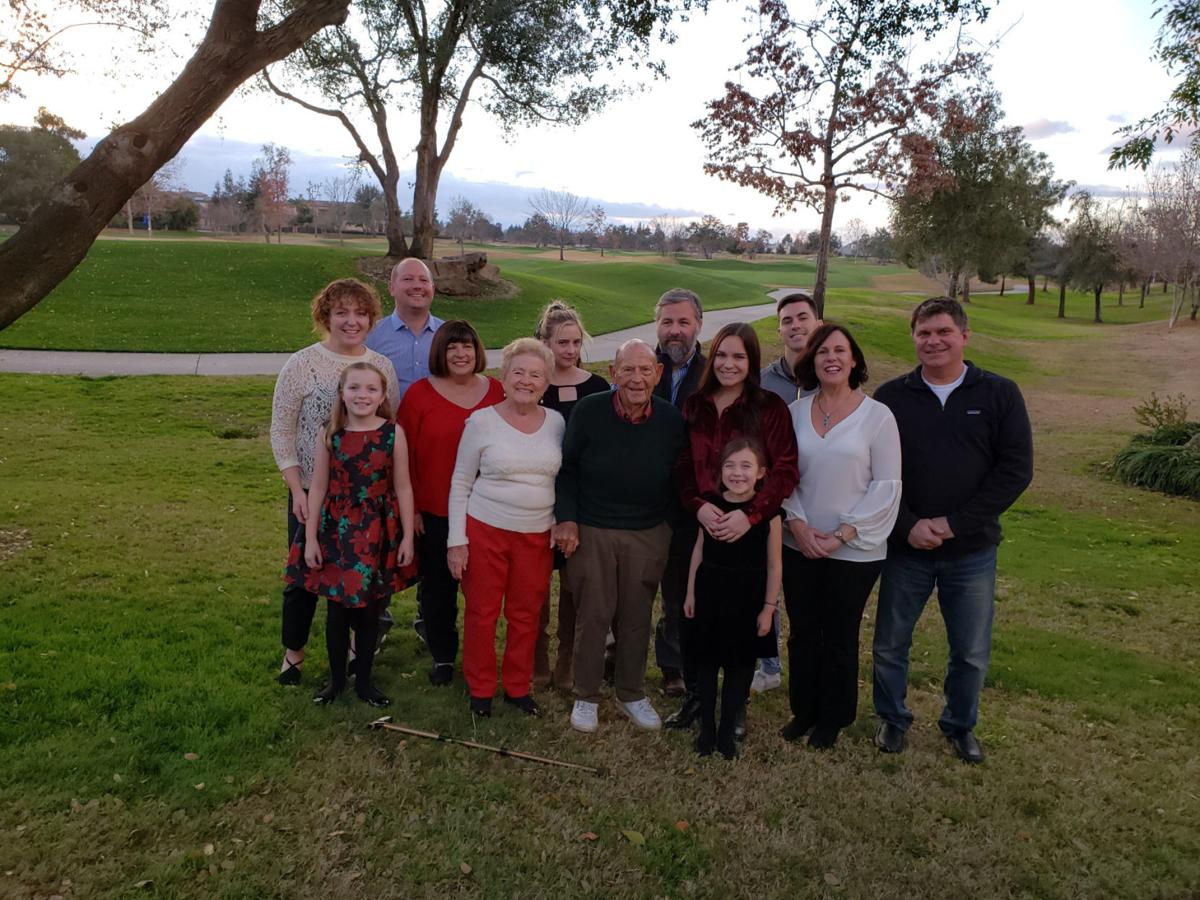 Frank and Rosemary DeMarco, center, the owners and founders of Rosemary's Family Creamery in downtown Bakersfield, surrounded by their children, grandchildren and great-grandaughters in a recent photo. Frank DeMarco died Monday at 89.

Frank and Rosemary DeMarco, center, the owners and founders of Rosemary's Family Creamery in downtown Bakersfield, surrounded by their children, grandchildren and great-grandaughters in a recent photo. Frank DeMarco died Monday at 89.

Frank DeMarco, the man behind Rosemary's Family Creamery, where generations of families, soccer teams, dance troupes and prom-goers gathered for a milkshake, an oversized sundae or sandwich, died Monday. He was 89.

His family said his health declined around Christmas and he died of congestive heart failure in hospice at his home.

DeMarco and his wife, Rosemary, opened Rosemary's in 1984, after he left a career in newspapers, working last as circulation manager at The Sacramento Union.

It was his dream to open a restaurant or ice cream parlor, like the kind he took his own family to while out for a Sunday drive or to celebrate after a school event, said daughters Katie Tate and Roseanne Brandon.

Friends of the DeMarcos in Sacramento operated a chain of ice cream parlors at the time called Leatherby's and suggested the DeMarcos consider opening a franchise in Bakersfield.

"This was an opportunity I couldn't pass up," Frank told The Californian in 2009 for a story on Rosemary's 25th anniversary.

The business operated under the Leatherby's name for the first year or two, Tate said, until the chain closed many of its franchises.

That's when it became Rosemary's — named after DeMarco's wife, who was his high school sweetheart. The couple celebrated their 70th anniversary on Dec. 31.

"He was the personality of the place," Rosemary DeMarco said Tuesday. "He was the one who made it what it is."

Many of the grandchildren have worked in the ice cream shop over the years and the establishment is run today primarily by his two daughters, and grandson, Patrick Brandon, who started working there at the age of 6.

Roseanne recalled that she continued to live in the Sacramento area after her parents moved to Bakersfield but her son Patrick would visit Bakersfield during summers and would work alongside them in the restaurant. Eventually the family relocated to Bakersfield.

"Business must go on," Tate said as she was prepping to open the store Tuesday morning. "That's how my dad would want it."

She said the fact that family is always there running the business is part of its success.

This past weekend, her sister Roseanne Brandon kept the store open past midnight to accommodate the throngs of teenagers who attended winter formal nearby.

The Californian's former Executive Editor Mike Jenner recalled how he and his wife went to Rosemary's for lunch after church each Sunday when their oldest son, now 19, was just a baby.

Frank would always work on Sundays back then and Jenner said he would see him reading the newspaper. They began talking over their shared interest in newspapers and the world, and eventually became friends.

"He was a very hard worker. Rosemary was as well. And they instilled that in their kids and grandkids and made that business a real success. I admired that," Jenner said.

Jenner recalled more than once seeing a homeless person enter the store. Frank DeMarco would always ask the young employee on duty to make a sandwich and the homeless person would leave with a bag and a milkshake in hand, Jenner said.

"There’s two things about my dad. He’s so nice and he always smells so good," Tate said, adding that her dad always wore Polo cologne.

Tate said her father was a "man's man," the kind who bought his wife jewelry for every birthday, Christmas and anniversary, and wouldn't think of letting his wife pump gas. And though he was no longer hands-on with the business, even up until recently, "if we had something that broke down in our ice cream machine, we'd go ask Pop," Tate said.

"He was just such a good dad and husband," Tate said. "Everyone was friends with him. Everyone gravitated to him."

I remember growing up in poverty and my brothers and I would go into the creamery after selling coke bottles to buy ice cream. Unfortunately we could only afford 1 scoop of ice cream each and if Frank was working, he gave us two scoops. He knew we were dirt poor kids and it was his way of giving back.

A major positive force in Bakersfield! RIP. You've done a great job promoting a fine enterprise to a great town!