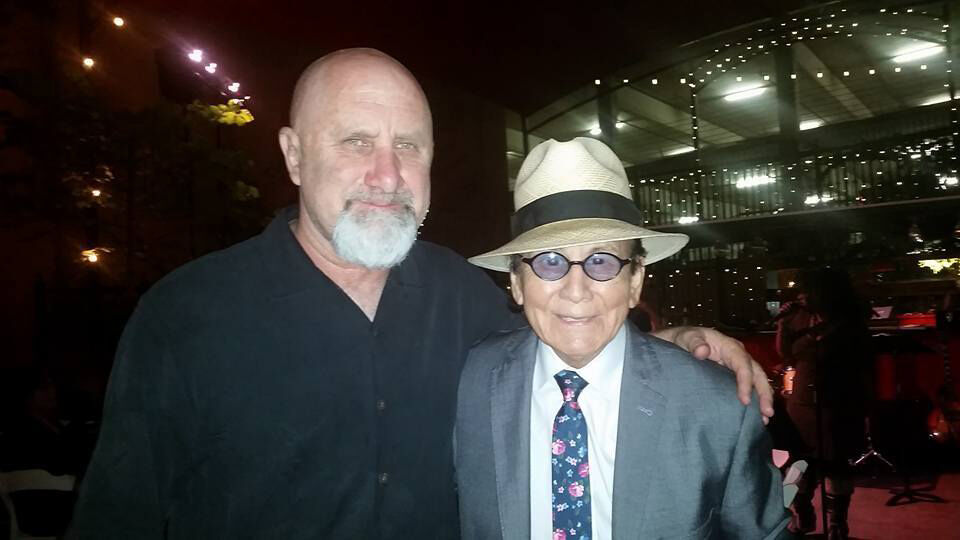 Steve Eisen, founder and CEO of the nonprofit Bakersfield Jazz Workshop, with saxophone player Richie Perez, who played at workshops a couple of times a year. 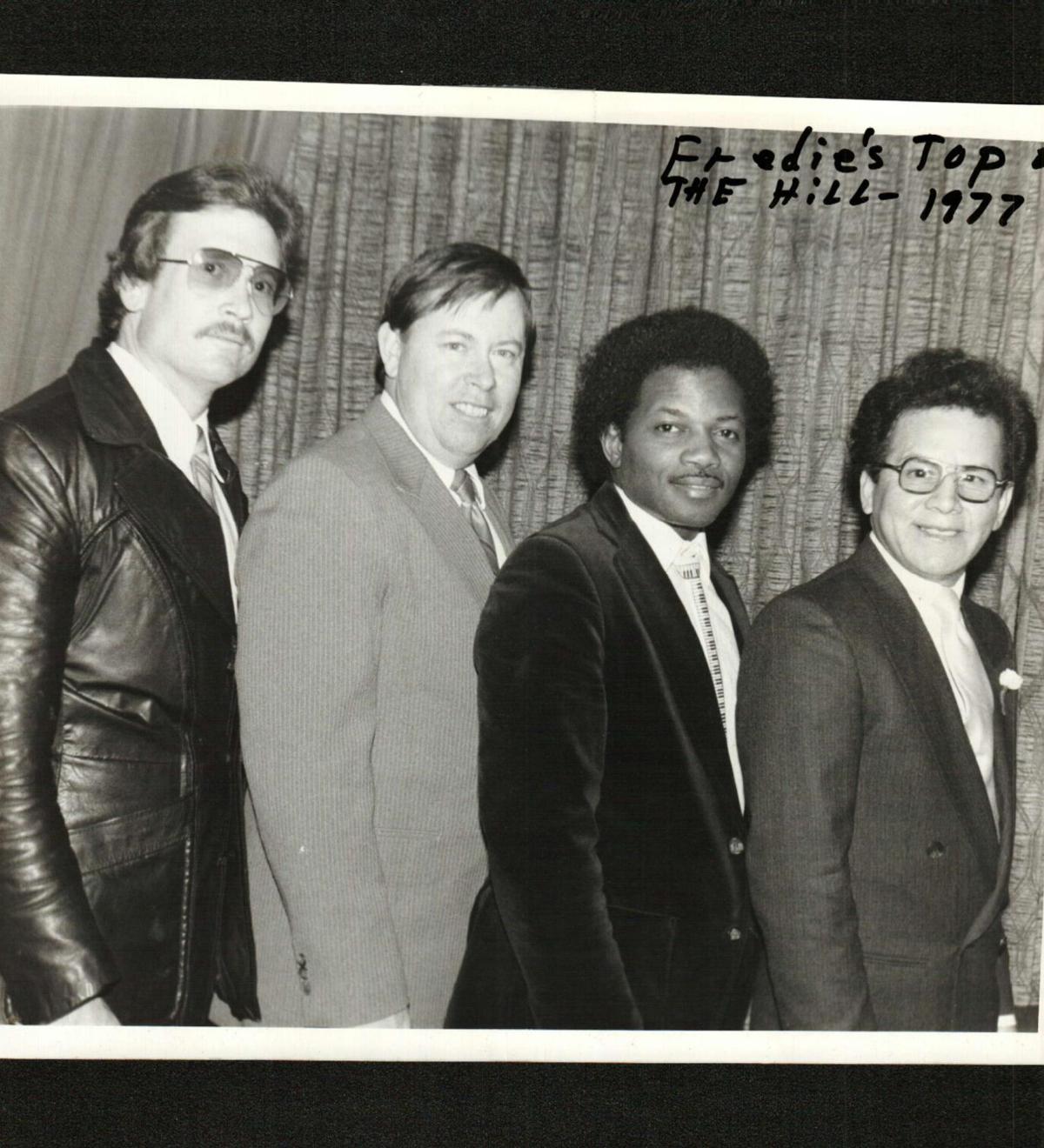 Richie Perez and his band promoting a 1977 show at Freddie's Top of the Hill. 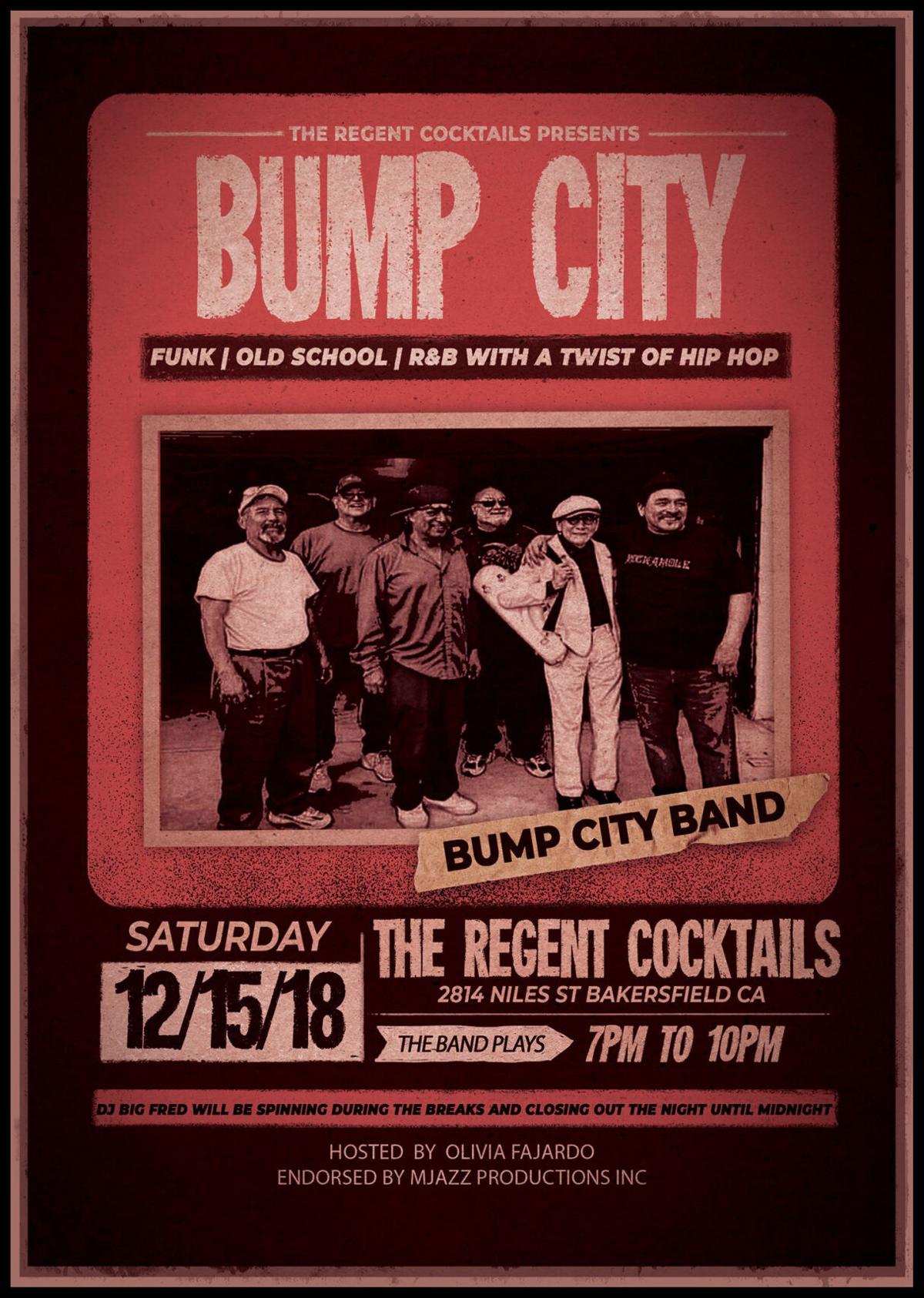 Poster of Richie Perez with his Bump City Band from 2018. 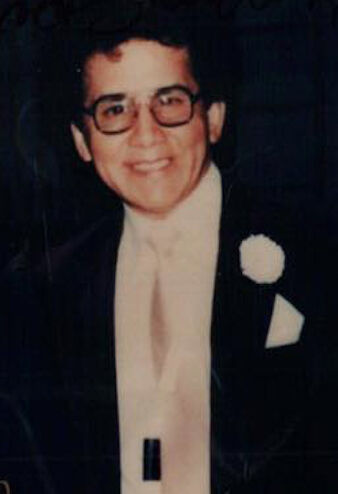 Richie Perez in his 20s. 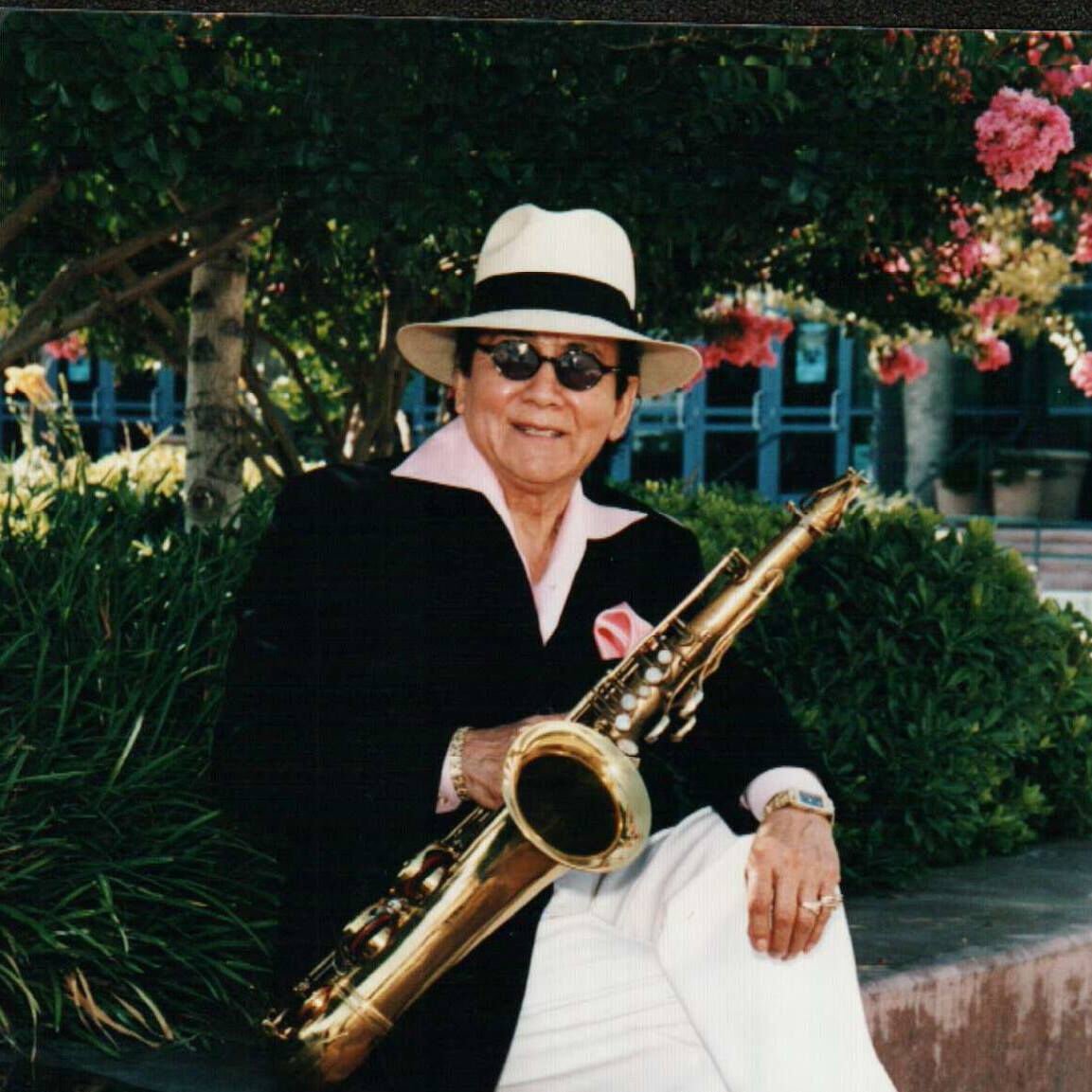 Richie Perez at the Marketplace. 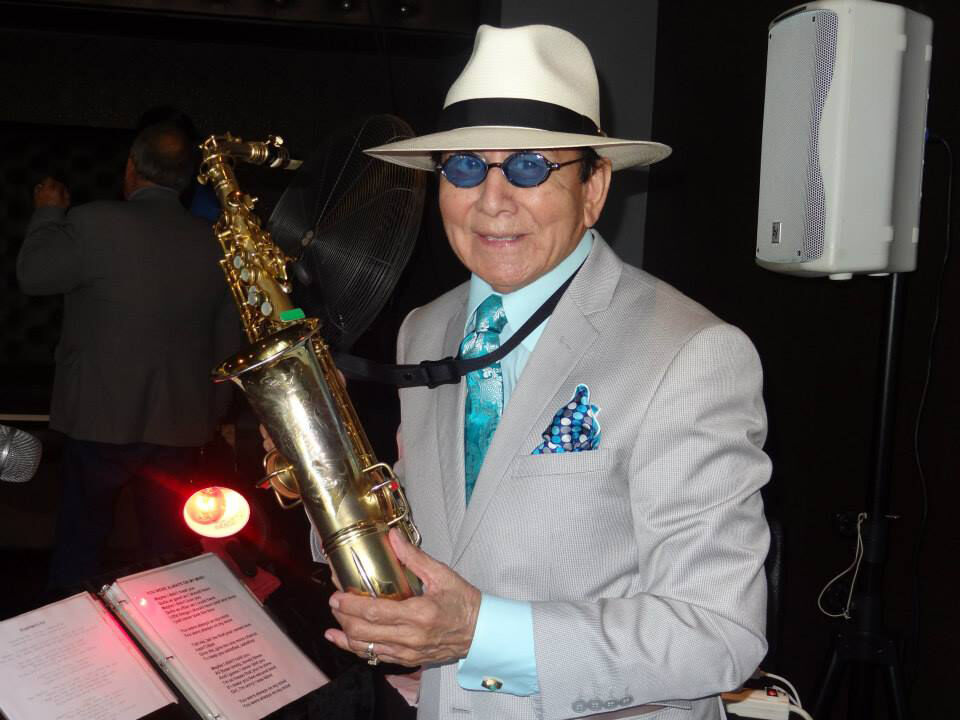 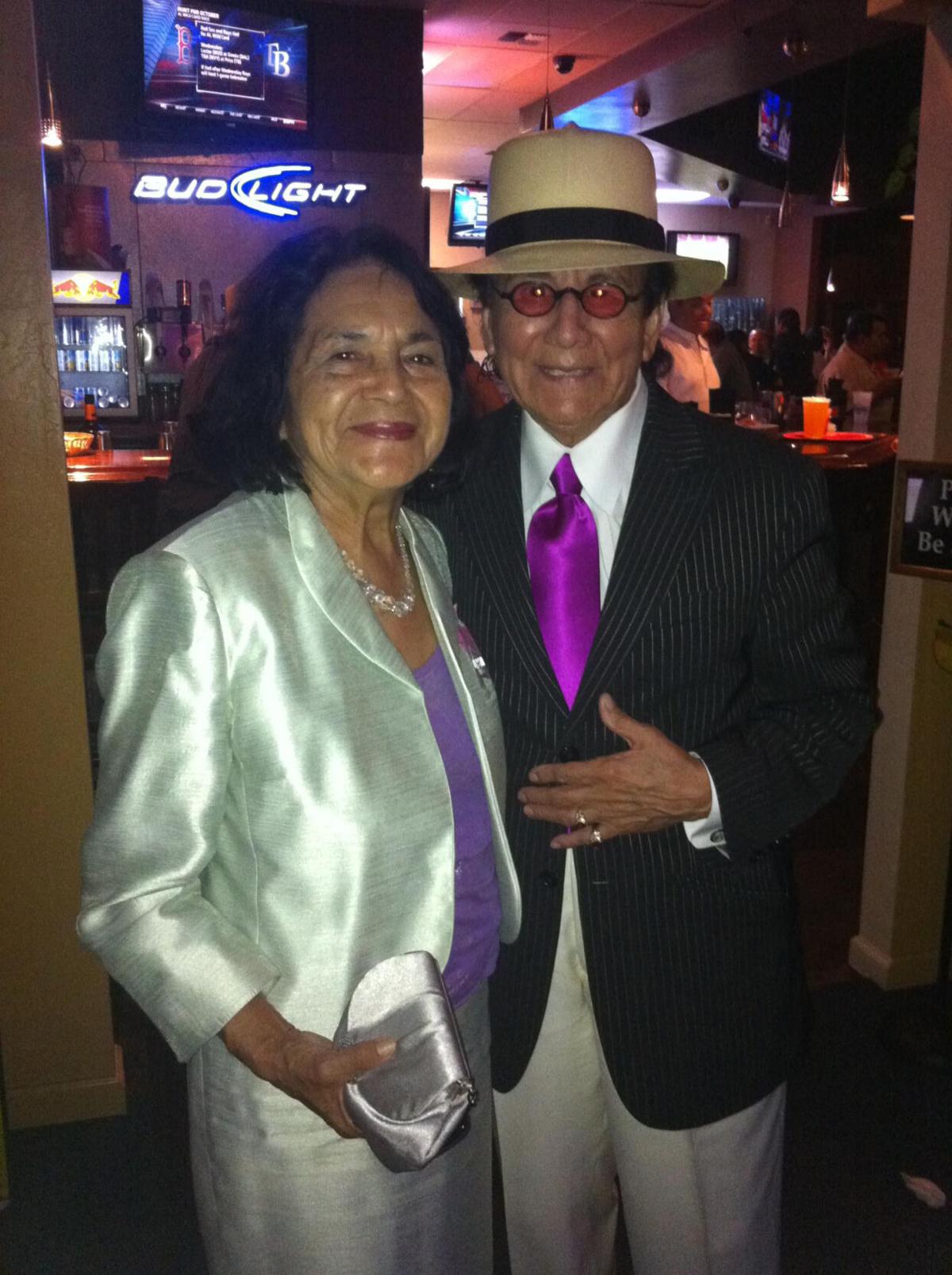 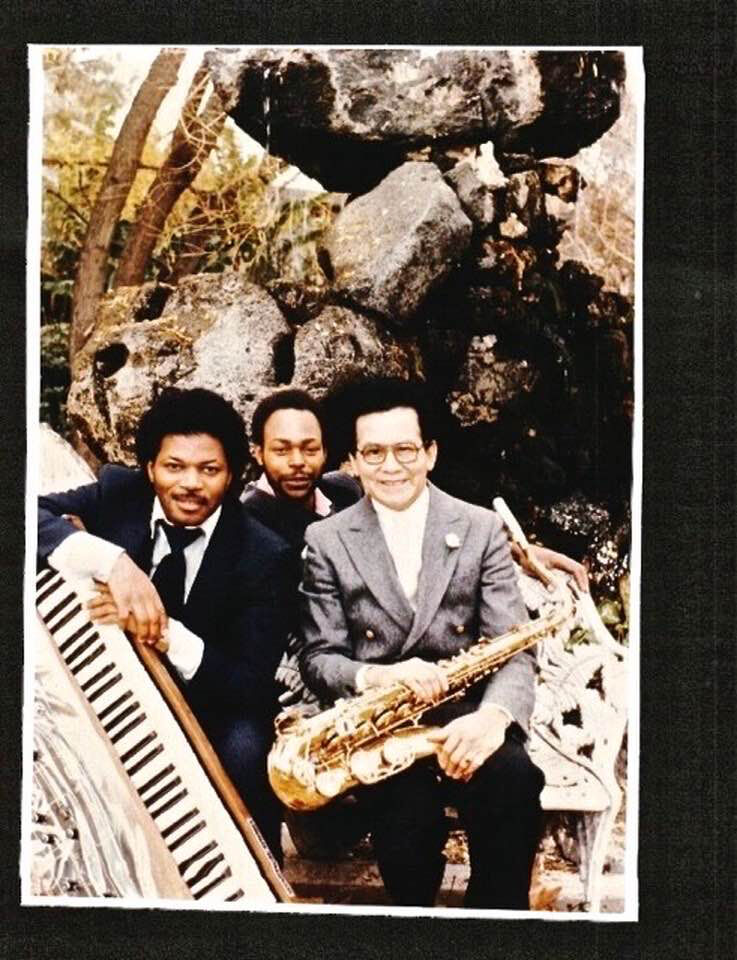 Richie Perez and bandmates, circa 1980. 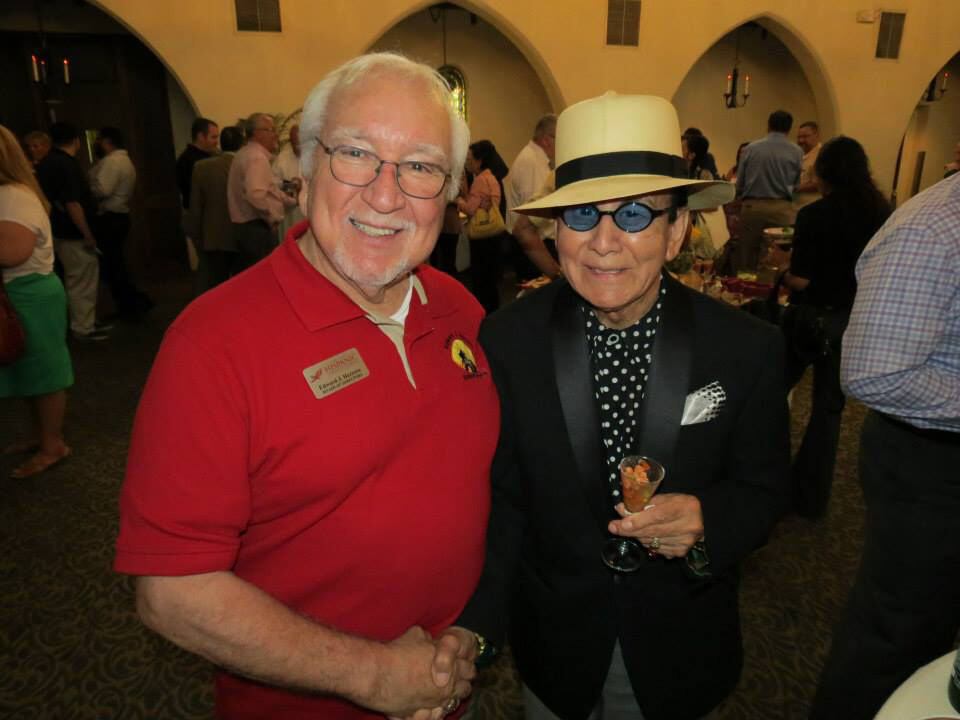 Richie Perez with Ed Herrera at the Bell Tower Club. 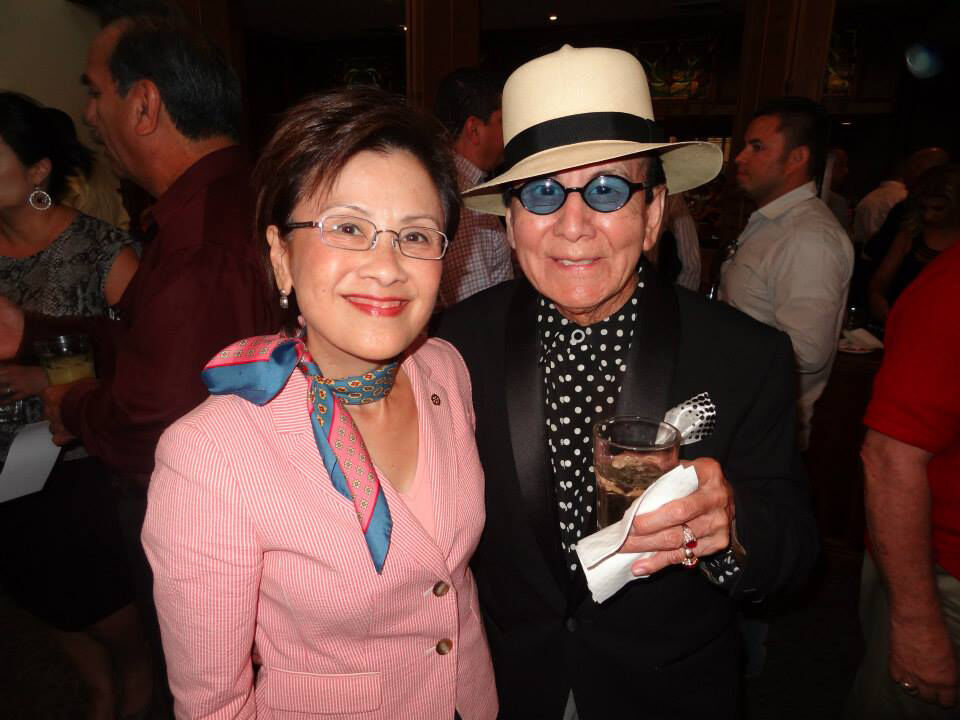 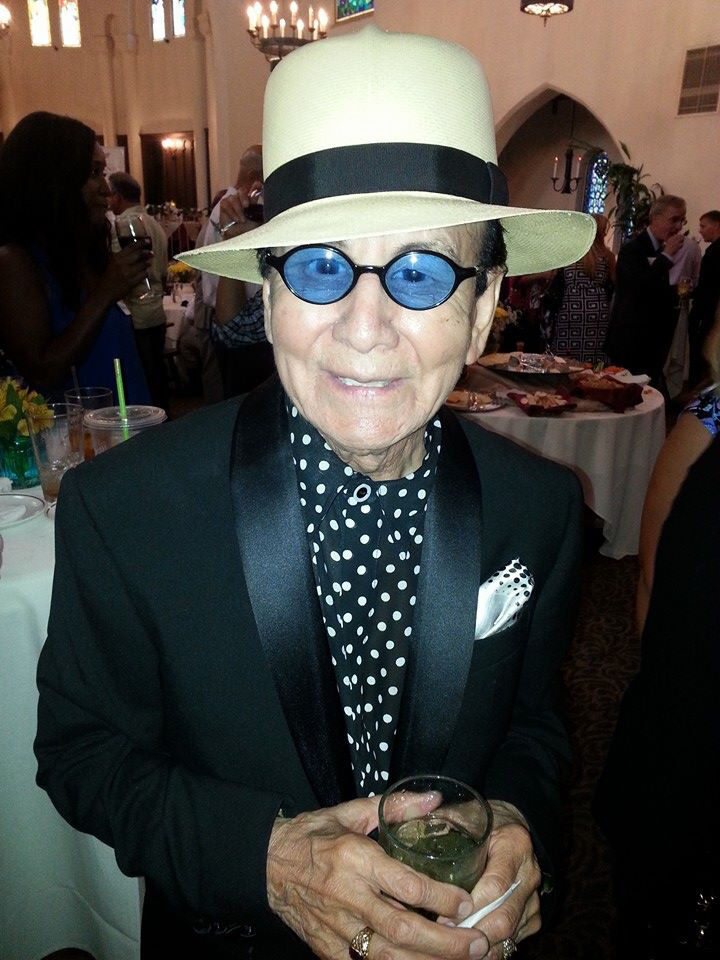 Steve Eisen, founder and CEO of the nonprofit Bakersfield Jazz Workshop, with saxophone player Richie Perez, who played at workshops a couple of times a year.

Richie Perez and his band promoting a 1977 show at Freddie's Top of the Hill.

Poster of Richie Perez with his Bump City Band from 2018.

Richie Perez in his 20s.

Richie Perez at the Marketplace.

Richie Perez and bandmates, circa 1980.

Richie Perez with Ed Herrera at the Bell Tower Club.

Raise your hand if you ever experienced this on a Saturday night in Bakersfield. You drive through the alley-slash-parking lot behind KC Steakhouse, the downtown institution on F Street, and, sure enough, you spot that immaculate turquoise 1971 VW bug. Yep, Richie’s here.

You pull open the back door that leads directly to the lounge and you’re hit with that first wave of sound. Another 12 paces, another swinging door, and wham! Blast number two. Richie Perez, with his straw fedora and that shimmering yellow metal appendage, is illuminated in the darkened bar, slow-dancing with his tenor saxophone.

Multiply that image by a hundred venues, dozens of saxophones and 70 years and you have an apt summary of the passion and persistence of the dapper, genial musician.

Richard Garcia Perez, who died Tuesday at 87, four months after the passing of his wife of 65 years, Lupe, demonstrated that Bakersfield’s music scene was more than twang, angst or thunder.

He had two fan bases. One, the patrons who would follow him to Mama Tosca's, Cafe Med, KC Steakhouse or one of the many local restaurants and clubs in the city, or were just pleasantly surprised to find him there as they paid the dinner check. Two, the fraternity of musicians who played alongside him, or just admired his style and omnipresence.

Brenda Sharp was both. She met him in 1961 after she was hired as a go-go dancer at the Gay 90s, a red velvet-bedecked club inside a bowling alley on Union Avenue. Perez, naturally, was the centerpiece of the house band.

“He was the sweetest, kindest man,” said Sharp, who also sang with Perez — and hired him both at the Silver Fox lounge on 18th Street, which she owned for 22 years, and at holiday parties at her home. “My mother loved him. Her name was Evelyn but he called her Evelina and she just melted.”

Sharp sang with Perez as part of the Bakersfield Jazz Workshop, a nonprofit dedicated to promoting the genre among younger musicians. Perez was an occasional guest at fundraisers for those workshops.

Steve Eisen, founder and CEO of the BJW, said Perez brought more to the workshops than just musical ability.

The instruments themselves — yes, Perez had a special affection for those too. Especially rare ones.

“He had a passion for saxophones,” said Ed Tomlinson, who remembers the day Perez walked in to welcome him “to the neighborhood” after he took ownership of California Keyboards, a music store, 21 years ago.

Perez was known almost as well for his impeccable dress as for his music — tailored suit, flashy tie, fedora pulled down low, dark glasses. He was particular about his carefully cultivated look. His longtime friend Fred Sanchez bought him a snazzy polka dotted tie in New York City, but noticed he wasn't wearing it.

"And then a few months go by," Sanchez said, "and I ask him, ‘Hey, Richie, I never see you wearing that tie I bought you.' And he says, in his normal tone, he says, 'Uh, wasn't happening man.'"

Sanchez sat down with Perez on two occasions, five years apart, and helped him compose a life history.

He wanted to play saxophone in the band at Bakersfield High School but the director told him he already had a sufficient number of players on that instrument. Perez, undaunted, sought out tutoring elsewhere and basically learned the instrument on his own.

His first gig was at the veterans hall at Owens Street Park — what is now the MLK Center — on East California. His pay that night was a pat on the back.

At 15, he auditioned for blues legend Muddy Waters in a Bakersfield hotel room on Union Avenue. Waters’ regular saxophone player was sick and he needed a quick replacement for a show that night at Rainbow Garden. “Play me some blues,” Waters instructed and, there, with the whole band watching, Perez went at it. He got the gig — but had to turn down an offer to play with the band the following night in Fresno. His parents wouldn't let him go on the road.

He stuck with local jobs — like long-running gigs on Lakeview Avenue at the Cotton Club and the Dellwood Club. It could be rough in those places, especially for a slender young Latino kid. On one occasion, a surly club patron put out his cigarette on Perez’s chest. After that, Perez started sneaking out to the safety of his car during breaks.

Over the years, he played with dozens of bands, developing a reputation not only for sublime command of his tenor saxophone but for his outgoing, suave demeanor.

Eisen saw him for the first time in 1993 at Mama Tosca’s, which was then located at Ming and Ashe.

"I was like 'Wow,'" Eisen said. "He was playing with a great keyboard player, organ player, Johnny Blue. And I said, 'Man, these guys got soul. Bakersfield, yeah, there's jazz here.'"

There is indeed jazz in Bakersfield — but, today, one less skilled practitioner, and a colorful one at that.

Perez, who lost wife Lupe to cancer last October, succumbed to complications of COVID-19, according to his son Mitchell. The couple had seven children and 27 grandchildren.

Services for Perez will be at 10 a.m. March 13 at Basham Funeral Care on Niles Street.

ROBERT PRICE: Gerry Haslam’s valley was a place of renewal and comfort

Gerald Haslam lived in Northern California for most of his life but he always kept one foot in his hometown. He would drive the 320 miles from…