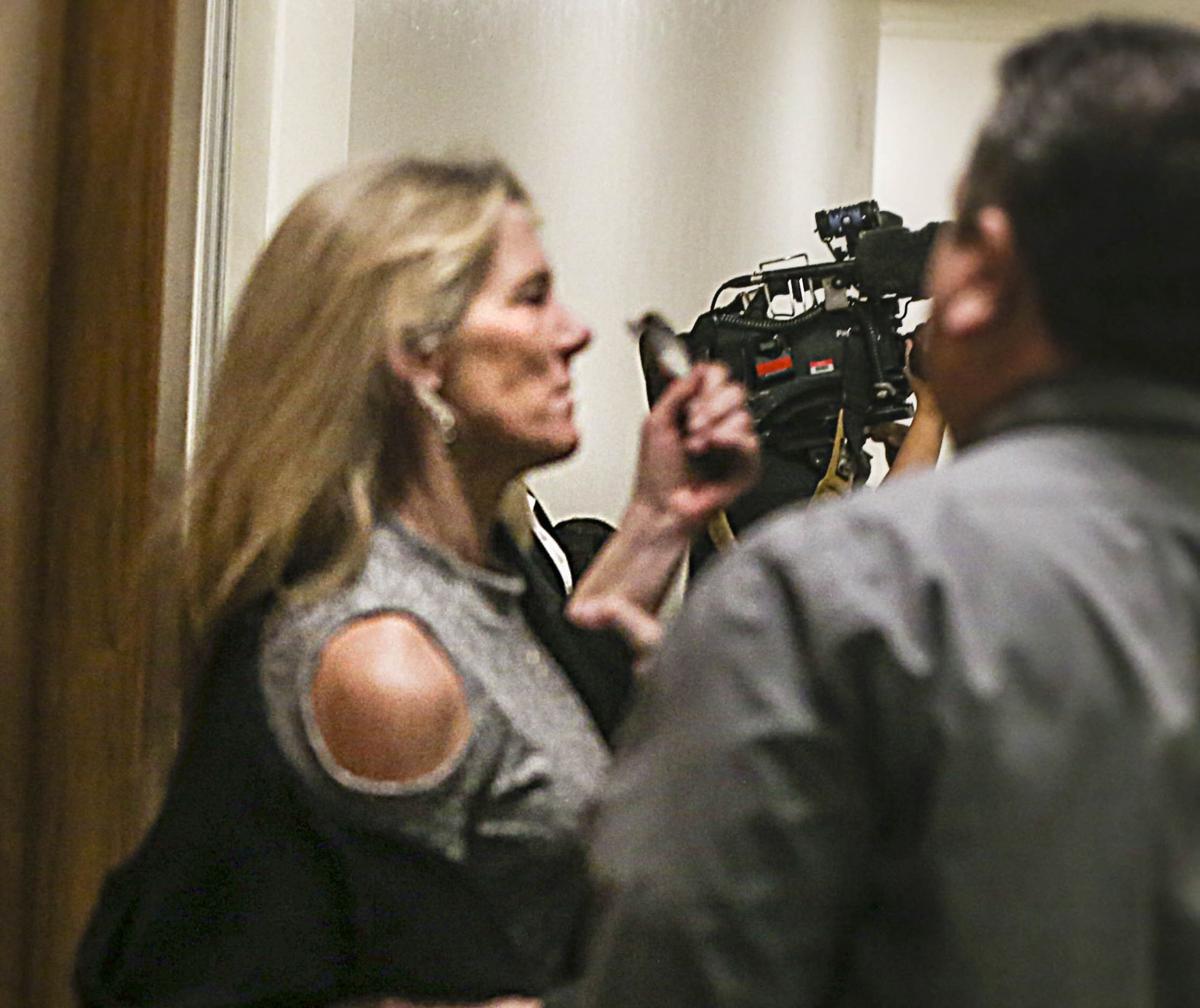 Karen Lynn Hudgins, Sabrina Limon’s friend, was arrested after being involved in an altercation in the hallway of Kern County Superior Court after Limon was arraigned on a charge of murder in the killing of her husband. Hudgins has taken a plea deal. 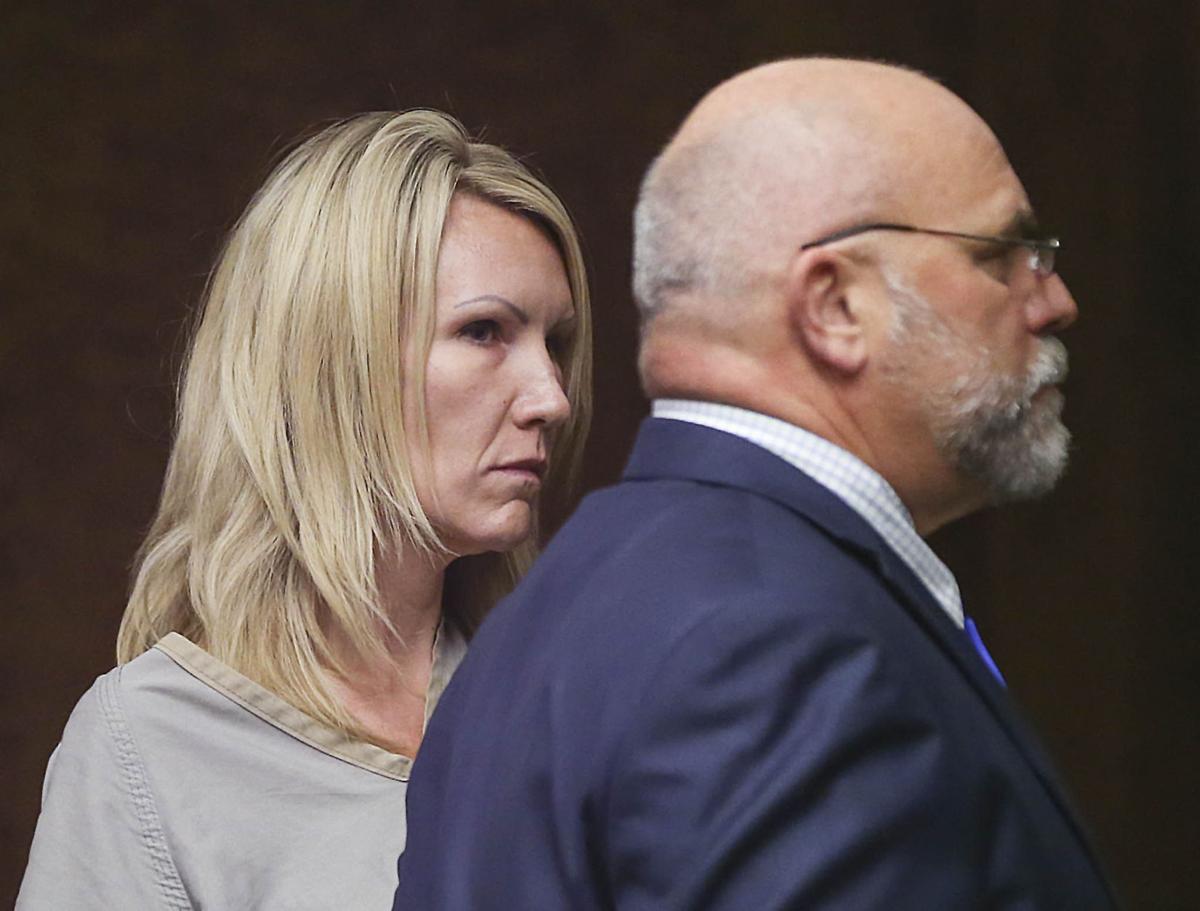 In this file photo, Sabrina Limon stands next to her attorney, Richard Terry, as she is arraigned on a murder charge in the killing of her husband in 2014.

Karen Lynn Hudgins, Sabrina Limon’s friend, was arrested after being involved in an altercation in the hallway of Kern County Superior Court after Limon was arraigned on a charge of murder in the killing of her husband. Hudgins has taken a plea deal.

In this file photo, Sabrina Limon stands next to her attorney, Richard Terry, as she is arraigned on a murder charge in the killing of her husband in 2014.

Karen Lynn Hudgins traveled from Southern California to Bakersfield last week to attend the court hearing of a friend charged with murder.

She ended up joining the friend, Sabrina Limon, in the custody of Kern County law enforcement.

According to court documents, Hudgins, 54, was arrested Jan. 10 after she plowed into a prosecution witness following the arraignment of Limon, who authorities say conspired with her lover to kill her husband, Robert Limon, in Tehachapi 2 1/2 years ago.

As she knocked the witness into a wall outside the courtroom, Hudgins told her, "You're going to hell." A Kern County sheriff's detective witnessed the incident and intervened.

Detective Robert Meyer wrote in court documents that he was standing outside the courtroom with members of the victim's family when Hudgins approached. Hudgins intentionally ran into the witness, using her shoulder and hands to slam her into the wall, Meyer wrote.

He grabbed Hudgins and told her she was under arrest, but she pushed him and a brief struggle ensued, he wrote. Another detective assisted Meyer in restraining Hudgins and taking her through doors leading to the downtown jail.

Once past the doors, Hudgins flung herself to the ground and yelled at the detectives, the documents said. They got her to her feet and walked her to the jail's booking area.

When later questioned, Hudgins told Meyer she hadn't realized he and the other detective were law enforcement officers, the documents said.

She told the detectives she was angry because the witness had been involved in a romantic relationship with Robert Limon and was on his life insurance policy. She said the witness, expected to testify at Sabrina Limon's trial, also stood to receive $100,000 in reward money.

Robert Limon's employer, Burlington Northern Santa Fe Railway, offered a $100,000 reward in 2014 for information leading to the arrest and conviction of those responsible for his death.

Hudgins, who lives in Newbury Park, pleaded not guilty Jan. 12 to two felony charges of threatening a witness, as well as misdemeanor charges of resisting arrest and battery on a peace officer. She was released after posting bond on $50,000 bail.

Conditions of her release include not contacting the witness or her family and turning over any guns she owns to law enforcement. Her next court hearing is scheduled for Jan. 30.

The witness told detectives she has previously been threatened by family and friends of Sabrina Limon and is concerned for her safety, according to the documents. She said Hudgins gave her "dirty looks" during the arraignment.

Sabrina Limon, 37, has pleaded not guilty to murder, conspiracy, solicitation to commit murder, attempted murder, poisoning and accessory charges in her husband's killing. She is next set to appear in court Friday.

According to court documents, Sabrina Limon conspired with former Redlands firefighter Jonathan Hearn, 26, to kill Robert Limon. She and Hearn were having an affair, investigators said, and exchanged thousands of text messages in the months before the killing.

Hearn pleaded guilty earlier this month to gunning down Robert Limon, 38, at a railway building in Tehachapi on Aug. 17, 2014.

He agreed to testify against Sabrina Limon as part of the plea agreement, which stipulates he will be sentenced to 25 years and four months in prison. Prosecutors dropped a murder charge after Hearn pleaded guilty to voluntary manslaughter with a gun enhancement, among other charges.

Sabrina Limon was originally arrested with Hearn in November 2014, but released shortly afterward. She was rearrested Jan. 6 in Camarillo.

Sabrina Limon told Hearn where her husband was working and his schedule on the day of the killing, investigators said in court documents. Video surveillance captured Hearn fleeing the BNSF industrial complex in Tehachapi just minutes after Robert Limon was shot, the documents said.

Sabrina Limon and her lover, court documents say, had planned to poison her husband by placing arsenic in his favorite dessert: banana pudding.

I know Sabrina, we worked together at Curves. I would never of guessed she would do something like this. Her mother and I were friends, she lived across the street from me. I know their hearts are broken......so so sad

Let me simply encourage you to sit through the hearing/ trial when they start and I'm most certain you will change your mind and realize what a cold, calculated sociopath she was/ is