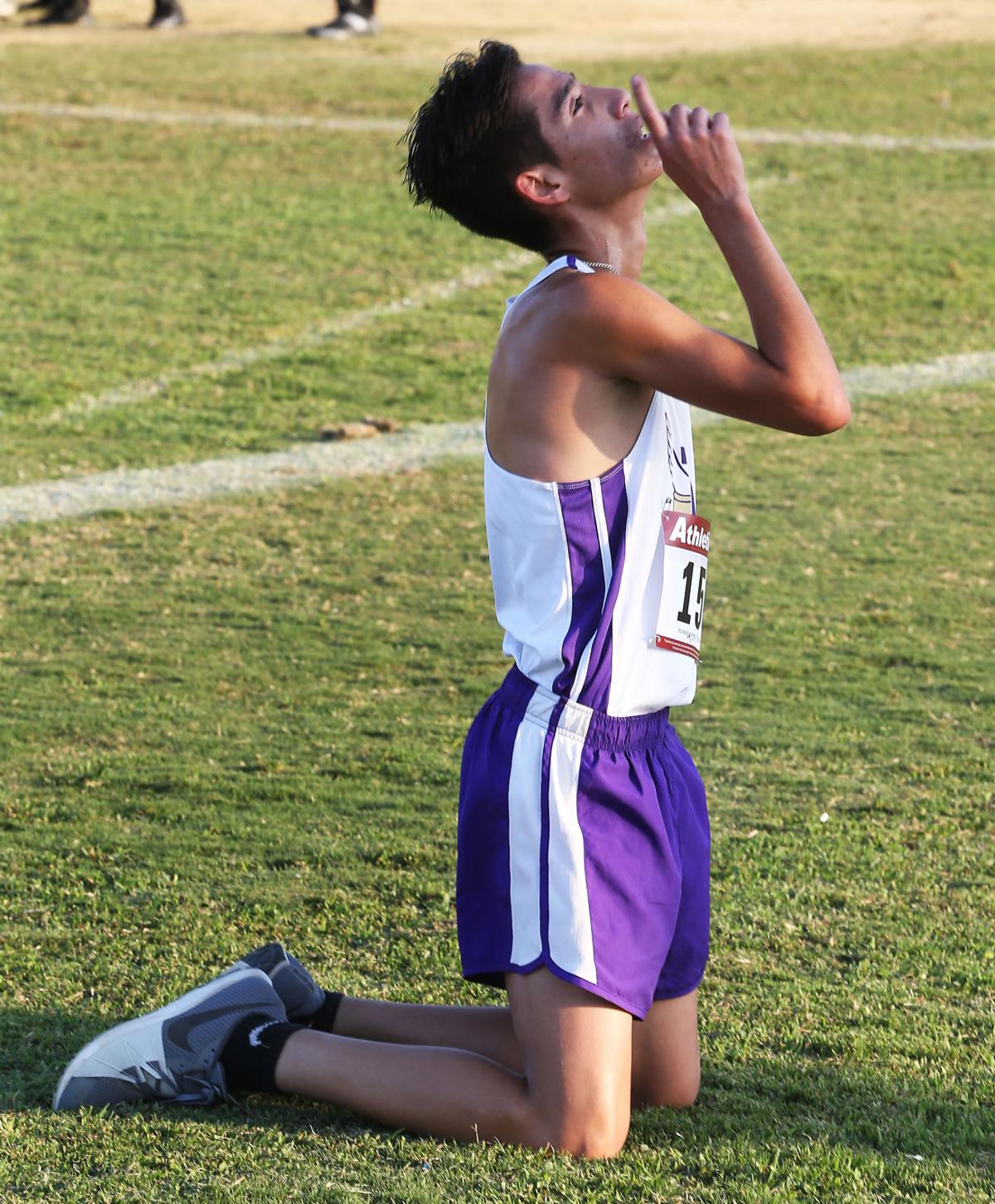 Alex Cuevas, a cross-country runner for Ridgeview High School, points to heaven after saying a prayer following his 7th place finish in the SYL meet in October 2017, less than two months after he was injured in a serious car crash. 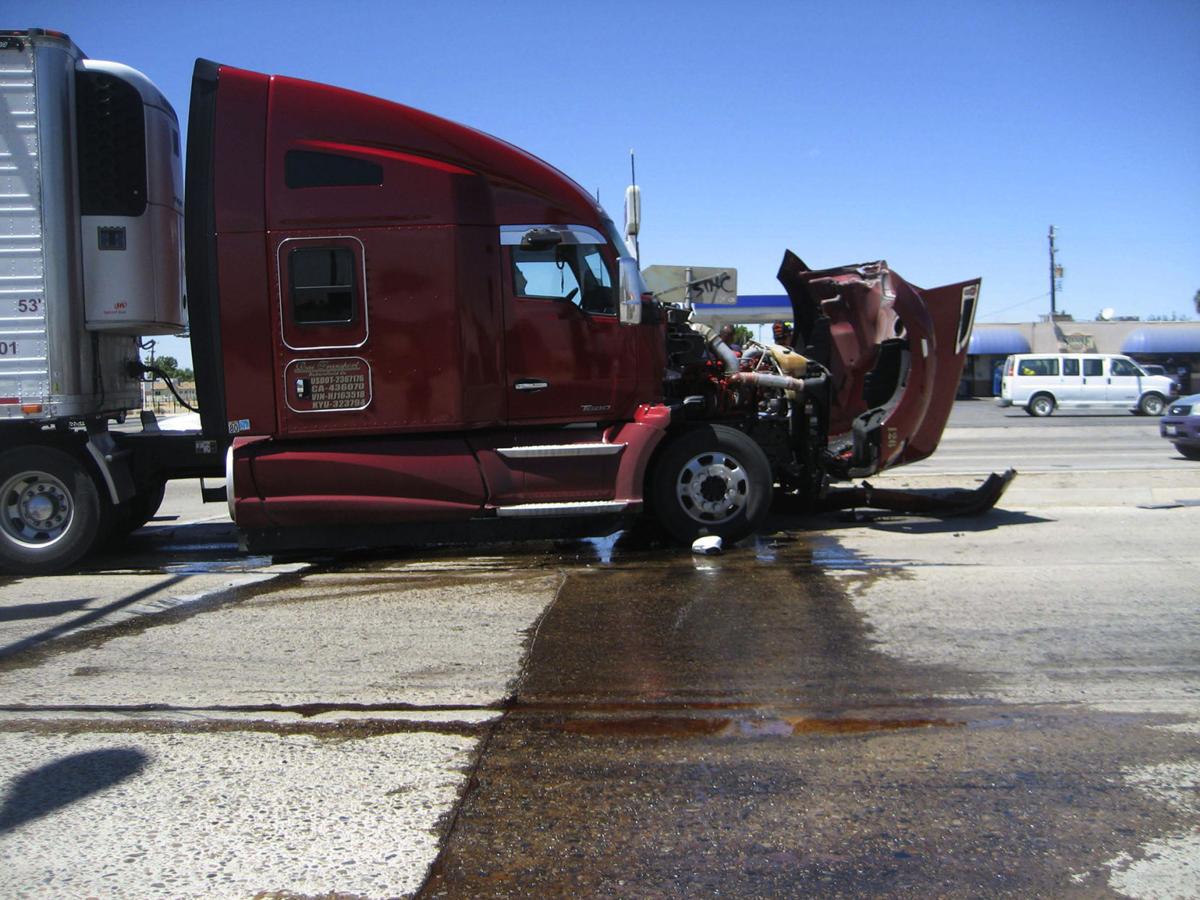 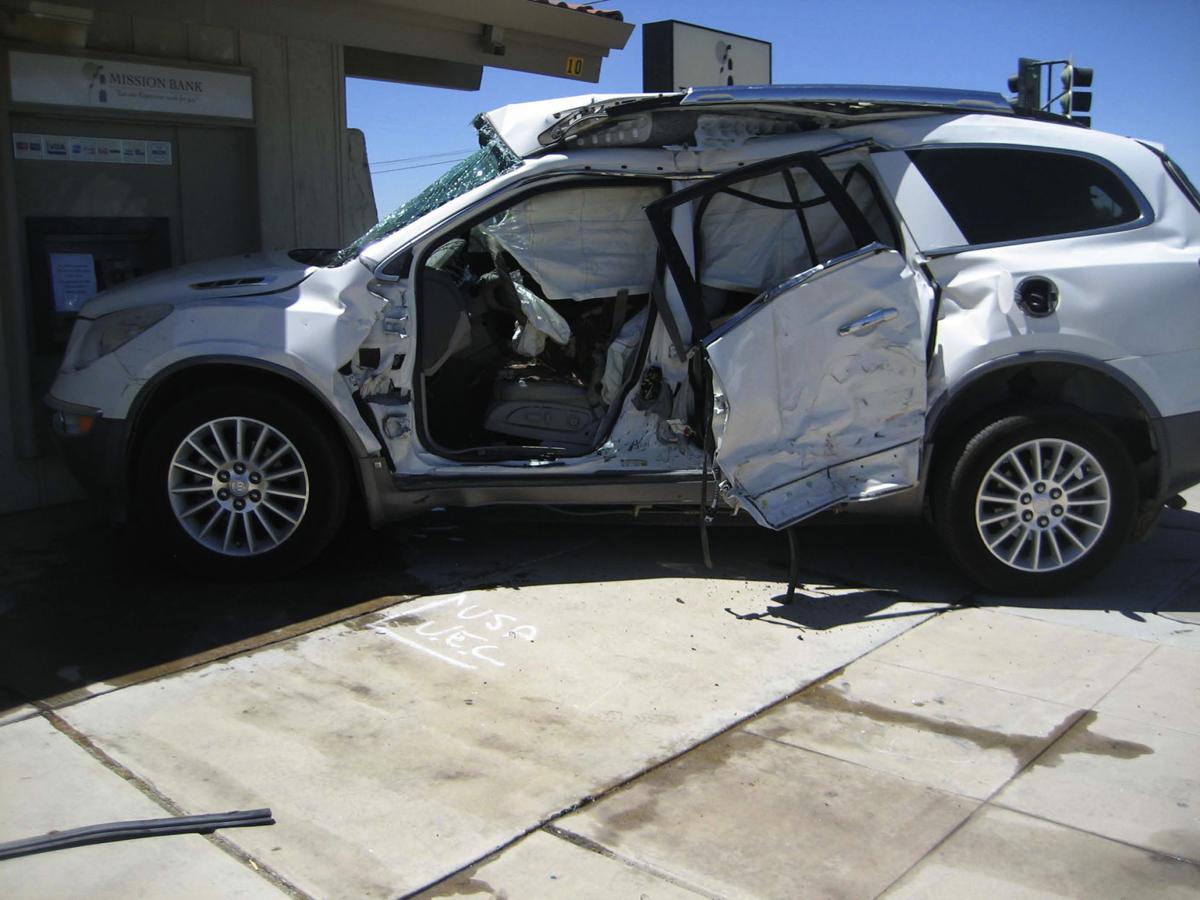 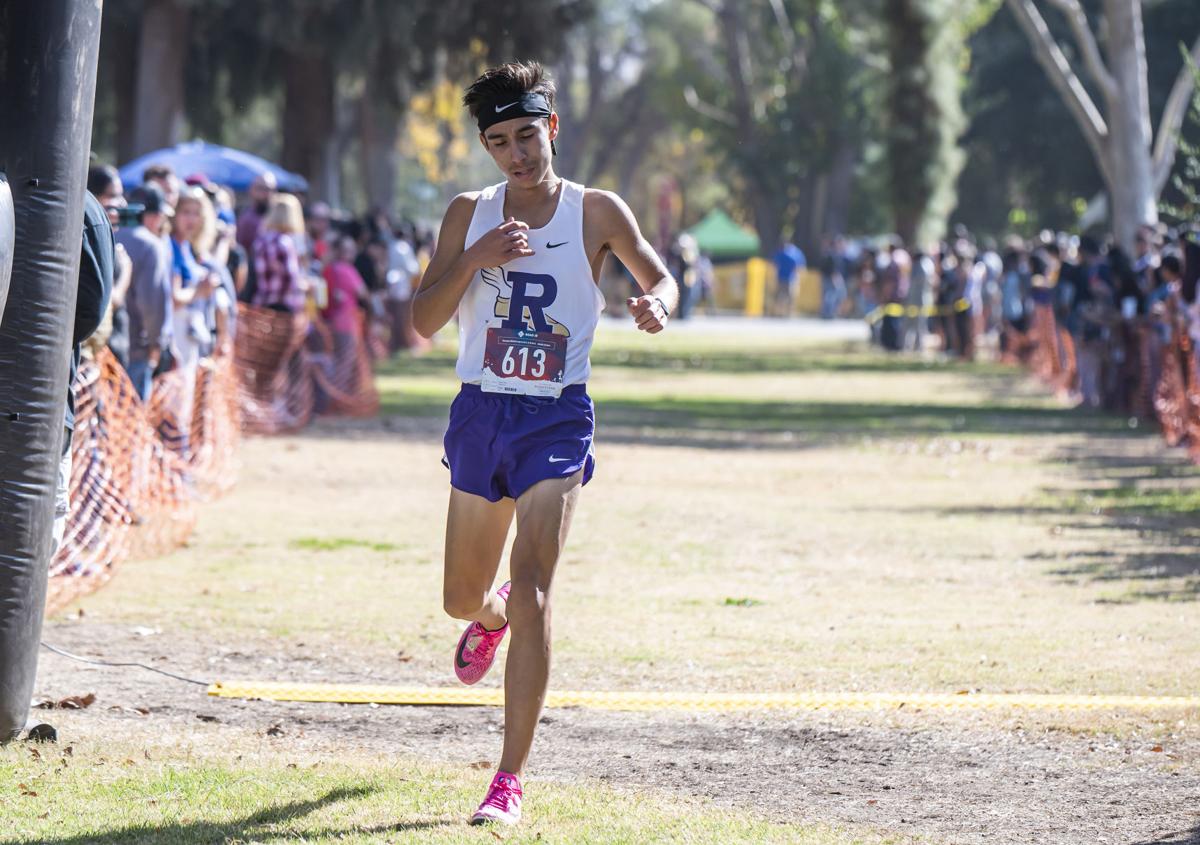 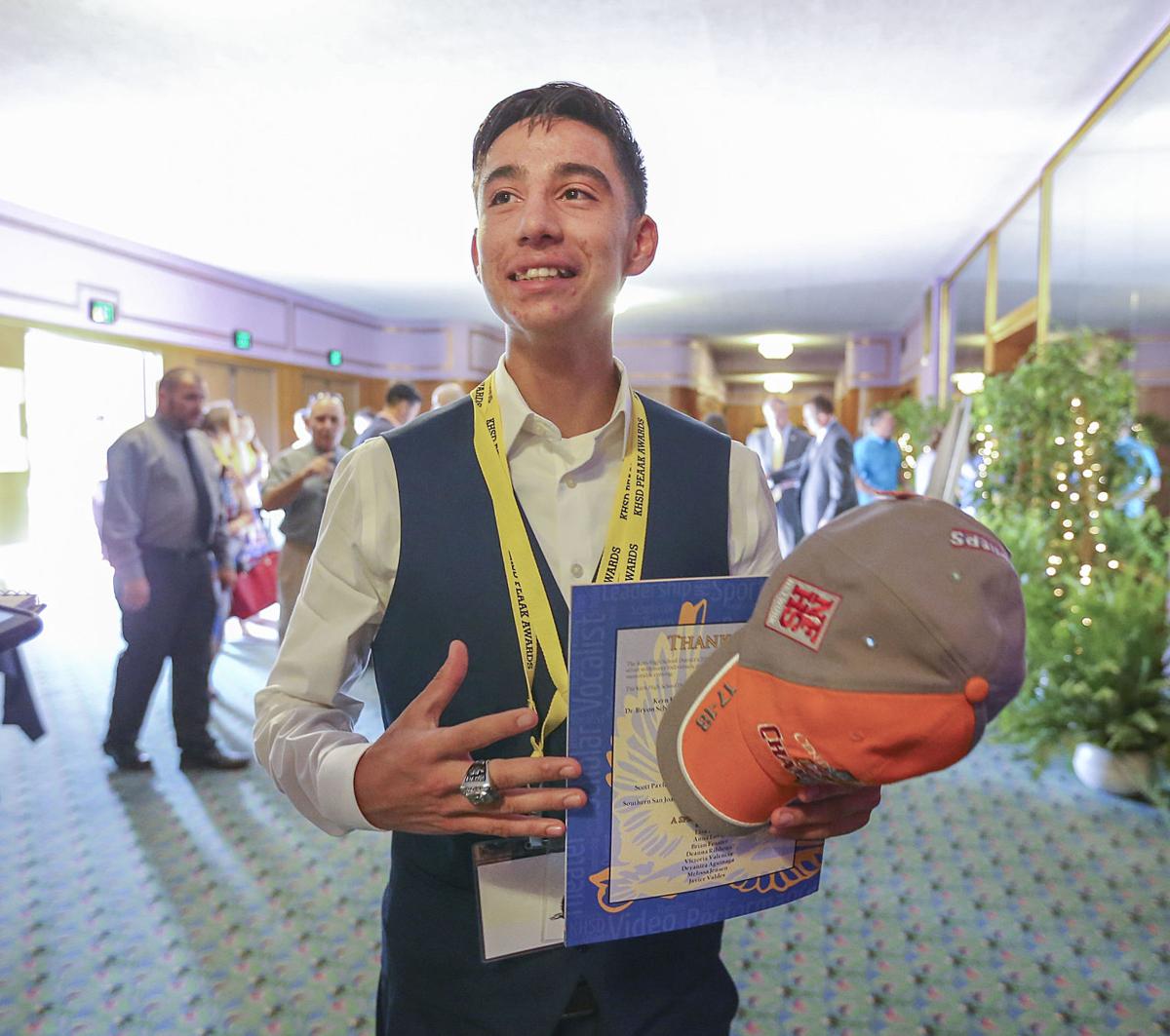 Alex Cuevas of Ridgeview High was the winner of the most inspirational award at the Kern High School District's 2018 PEAAK Awards, held at Bakersfield High School's Harvey Auditorium.

Alex Cuevas, a cross-country runner for Ridgeview High School, points to heaven after saying a prayer following his 7th place finish in the SYL meet in October 2017, less than two months after he was injured in a serious car crash.

Alex Cuevas of Ridgeview High was the winner of the most inspirational award at the Kern High School District's 2018 PEAAK Awards, held at Bakersfield High School's Harvey Auditorium.

A Kern County jury awarded a $70 million verdict to a mother and her two children who were going to get new clothes before the first day of school in August 2017 when a big rig slammed into their SUV.

The three survived the crash but Tomasa Cuevas, a mother of four, and her son, Alex Cuevas, who was entering 10th grade, suffered serious brain injuries. Maritza, the youngest child who was 11 at the time, was found by paramedics crying hysterically outside the SUV after seeing her mother and brother covered in blood and unresponsive. She suffered only scratches but has since been diagnosed with post traumatic stress disorder.

The $70,578,289 verdict is the highest personal injury verdict in Kern County history, according to a news release issued Thursday by the law firm of Rodriguez & Associates, which represented the Cuevas family.

"I couldn't believe it," said Fidencio Cuevas, 24, the eldest child in the family. "Anything medical-wise that has to be done, we don't have to worry about it now."

Cuevas said the accident drastically changed the family's life and the brain injuries suffered by his mother and brother would affect them for the rest of their lives.

"This was a terrible car wreck that was 100 percent preventable," said the Cuevases' attorney, Daniel Rodriguez.

Rodriguez said his team's investigation found the big rig driver, Amarjit Aulakh, had a suspended license and had been in 14 prior crashes. The trucking company named in the lawsuit is Rai Transport, based in Bakersfield, Rodriguez said.

An attorney for the company could not be reached for comment Thursday.

Rodriguez said Aulakh told a California Highway Patrol officer it was Tomasa Cuevas who ran the red light. Cuevas was not interviewed at the scene because she was unconscious and she still remembers nothing of the incident, Rodriguez said. CHP viewed surveillance video from two nearby businesses but were unable to make a determination from them, Rodriguez said.

However, Rodriguez's investigators obtained video from a third source — inside a GET bus that was stopped at the intersection — which showed the big rig had the red light.

Tomasa Cuevas has ongoing memory problems and her olfactory nerves were ripped out in the accident, so she no longer has a sense of smell or taste, Rodriguez said. Her vision and hearing were also damaged, he said.

"My mom isn't independent anymore," son Fidencio Cuevas said. "She has to depend on us, the family."

Alex, a star cross-country runner, had other injuries and doctors said he might never run again, Rodriguez said. Alex Cuevas told The Californian in October of that year that his hips were dislocated because of the seat belt.

But he returned to racing for the Ridgeview High team within two months and led the team to a state title the following year. He will attend UC Davis next fall on an athletic scholarship, where he will run for the cross country team and study engineering, brother Fidencio Cuevas said.

Rodriguez said the family is emotional about the verdict, which was reached Wednesday afternoon after a three and a half week trial.

The family has a humble background. Tomasa and her husband are immigrants. Tomasa went to school until sixth grade and her husband didn't learn to read or write until he was an adult, Rodriguez said. Their two oldest children are studying engineering and education at Cal State Bakersfield and both work full time, Rodriguez said.

"The dad was with us. We all cried," he said. "It was so satisfying to feel validated."

The fact that three people were in a horrific car crash and, although there are some repercussions, they are alive and the family continues to come together to support the victims. Mr. Rodriguez continues to serve his clients well and I hope that if I need a lawyer, I can hire him. Alex has shown awesome recovery and continues to pursue an education. Congratulations !

thanks for an update to this sad story

NO kidding. This article is a hack job- the case could have been worth 100million as far as we know. Facts- fake news is here to stay it seems

This article only stated facts. Nothing fake at all.

AND Rodriguez just paid for his new building downtown

You need to back to journalism school! Who was defendant and who was the driver AND was the defendant cited by the CHP and or sentence? No wonder we are noted as a third rate back water town of BACKWARDSFIELD!

agencies are the same

The writer needs to "back to journalism school". First, what is "journalism school"? Second, you forgot the "to", so maybe you need to check out an English class. The rest of your rambling is so bad, it hurt my brain and now I need to go drink. "Third rate" needs a hyphen. Yowsa.