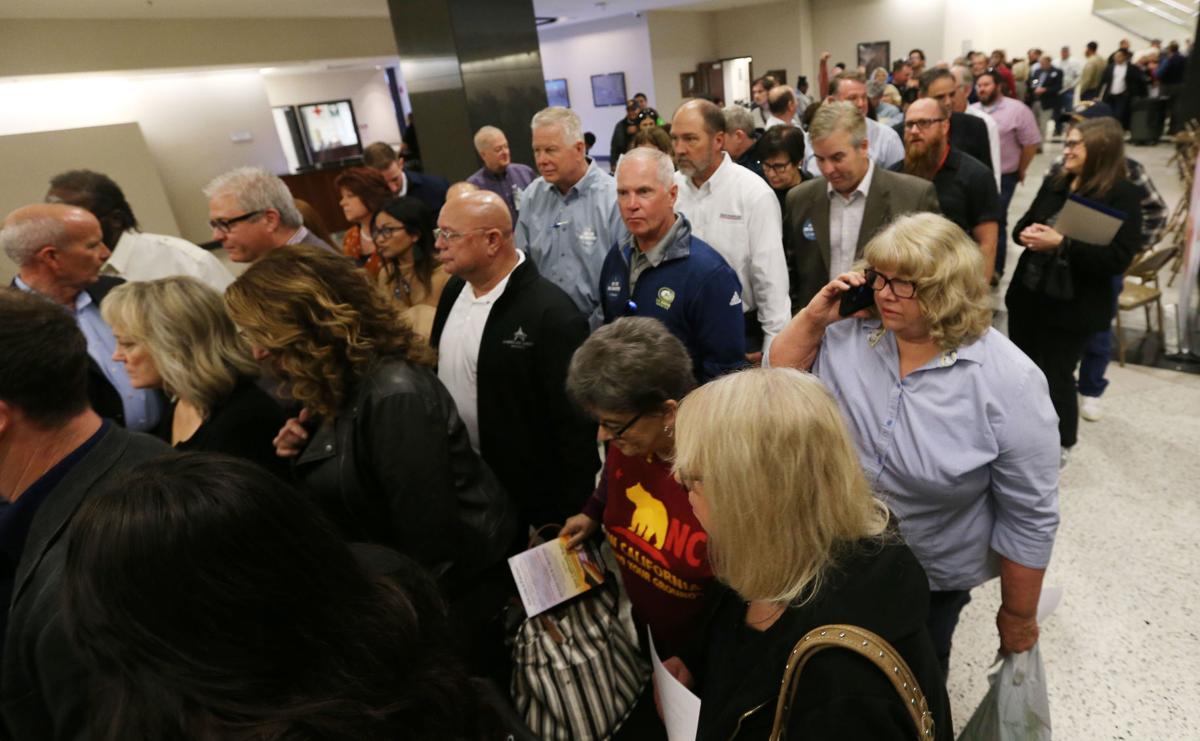 A large crowd files into the Kern County administrative center for a 2 p.m. Tuesday meeting of the Board of Supervisors, where senior state oil regulators faced oil industry leaders. 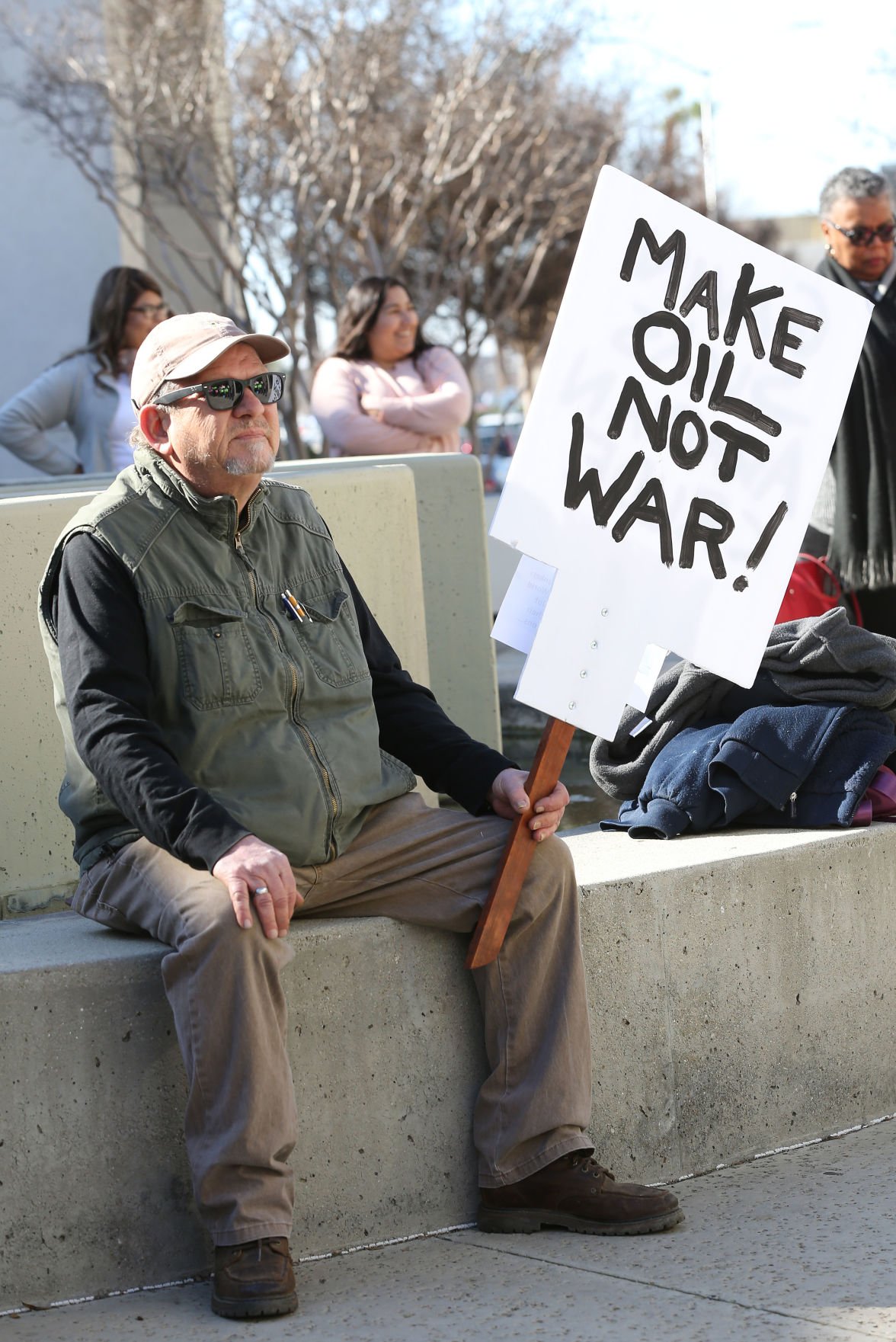 Jon Carrithers turned out for the 2 p.m. Tuesday meeting of the Kern County Board of Supervisors, where senior state oil regulators faced oil industry leaders. 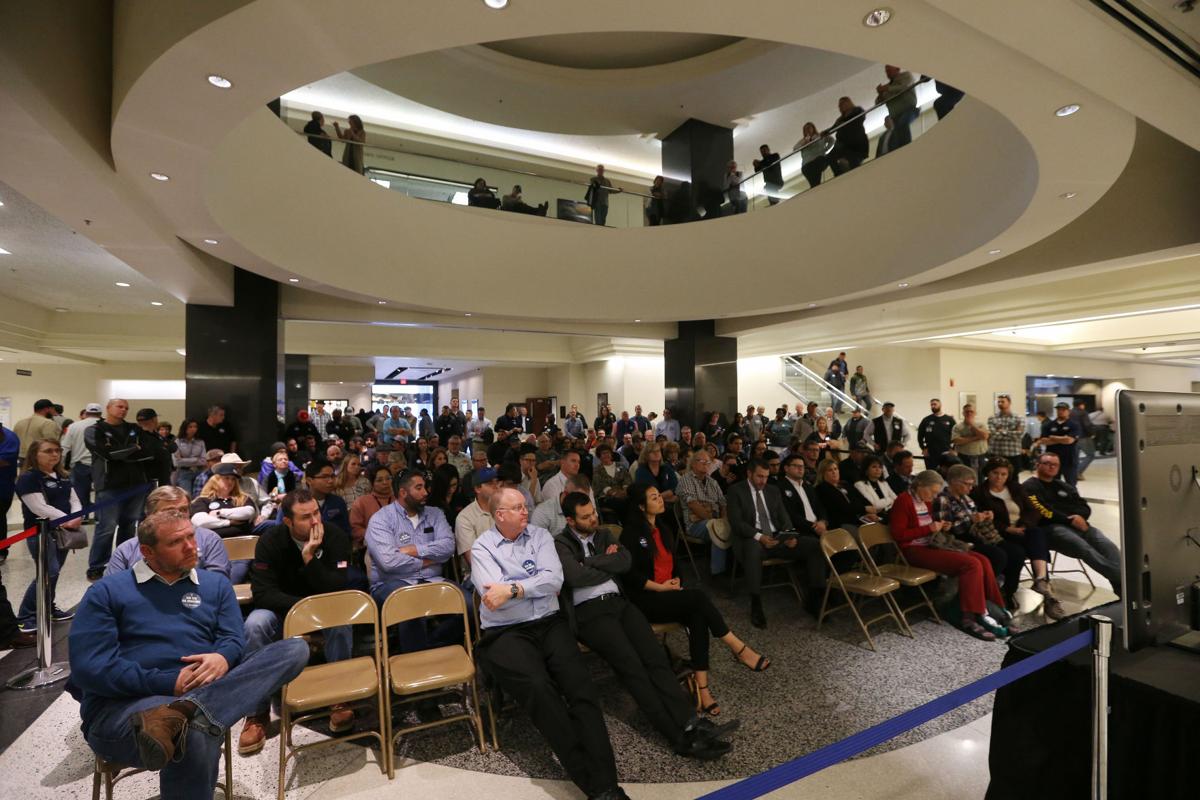 An overflow crowd of spectators watched the 2 p.m. Tuesday meeting of the Kern County Board of Supervisors on screens outside chambers, where senior state oil regulators faced oil industry leaders.

A large crowd files into the Kern County administrative center for a 2 p.m. Tuesday meeting of the Board of Supervisors, where senior state oil regulators faced oil industry leaders.

Jon Carrithers turned out for the 2 p.m. Tuesday meeting of the Kern County Board of Supervisors, where senior state oil regulators faced oil industry leaders.

An overflow crowd of spectators watched the 2 p.m. Tuesday meeting of the Kern County Board of Supervisors on screens outside chambers, where senior state oil regulators faced oil industry leaders.

If the Kern County oil industry wanted to send a message, it did.

At the invitation of the Kern County Board of Supervisors, more than a thousand oil workers, executives and individuals associated with the industry packed the Kern County Administrative Center on Tuesday, filling the building completely.

Two overflow rooms and chairs set up in front of a television in the lobby were not enough to hold the crowd. At one point near the meeting’s beginning, fire officials stopped admitting people into the building, saying it had reached capacity.

An estimated 850 people watched the meeting inside the building, with around 250 relegated to listening to the proceedings on speakers that were set up just outside the entrance.

The 1,100-person turnout was said to be “certainly a record” by Kern County spokeswoman Megan Person.

Carrying picket signs, wearing hats that read “Make Oil Great Again,” and plastered with stickers saying “I am the oil industry,” attendees hoped to make it abundantly clear to not only the supervisors, but also the state officials in attendance, that meddling with oil production could have serious consequences.

“This is wonderful for us to come together,” said Kathy Orrin, executive director of the Taft District Chamber of Commerce, who attended in support of the oil industry. “We’re busy working so we don’t think about how important this industry is, but it’s important that we look at each other and say ‘oh yeah, look at all these people who support our county.’”

On hand to observe the proceedings and provide insight into the state’s plan for the oil industry were some of California’s top regulators. Department of Conservation Director David Shabazian, Oil and Gas Supervisor Uduak-Joe Ntuk and the governor’s legislative secretary Anthony Williams all spoke publicly in the county for the first time since the state announced new restrictions last year.

The new rules sent a wave of concern throughout the industry, with many worrying that the so-called managed decline of the state’s oil production had already begun.

“With (Gov.) Gavin Newsom trying to do everything he can to shut down the oil industry, he’s shutting down a lot of jobs at the same time,” said James Leal, owner of PROS Incorporated, an oilfield service company.

A large contingent of Leal’s employees attended the meeting to advocate for their jobs, Leal said. He hoped the large turnout would help persuade state regulators to allow Kern County’s oil work to continue.

Rowdy Dickard, a general manager for a spill response and tank cleanup company, agreed with Leal in the hope that regulators would take note of the turnout.

“They are going to drive so many people out of California it’s not even going to be funny. It’s going to ruin this state,” he said of the state’s plan for oil’s decline. “We need to send them the message that ‘hey, we’re here. And we’re not going anywhere.’”

The large crowd was almost entirely in favor of the industry. While environmental groups held a press conference about an hour and a half before the 2 p.m. start time, almost no activists showed up to the meeting.

However, local petitioners gathering signatures to recall the governor attended, saying they hoped to gain hundreds of signatures through the attendance.

The marathon meeting lasted well into Tuesday night, with many attendees sticking it out to speak during public comments.

One man who noted he would watch from outside the building said he hoped the governor would take note.

“When the governor is talking about reducing emissions, he’s really not thinking globally at all,” said retired environmental engineering manager Jon Carrithers, claiming Newsom had not considered the environmental impacts of shipping oil overseas. “It’s really a bad policy for the environment and I just think that needs to be brought forward.”

Mike Gleason District I summarized the night up perfectly.

" ... I want a cleaner planet, cleaner place better air, safer place for my kids, my grandkids, BUT not at the expense of the quality of life that is offered by the people who live and contribute to the oil industry."

The best reason yet to split the state in two. East (Right) California (anything east of the Sierra Madre's - conservative and West (Left) California everything that's left from Frisco (they hate that term) to Tijuana.

Mr. Crabtree: Aren't you a realtor ? If not, my apologies. However, if you are, do tell, why are realtors so determined to keep home values low when commission is based off dollar amount? You support the very reason homes sell cheap here. You support the unbelieve ugliness. Pumps, refinery, unfiltered flares ….river water diverted, stripped land.

I don't need to paint you a picture of what you see in the valley. The only reason you support this disrespect is because you have land ownership benefitting. Yes?

Aera sends me a check every year. They lease property from me, but it is at the edge of the field and will probably never be drilled. I’m okay with that.

Oh Dorkies2014 you are sooo funny!

Continued inarticulate musings- it would be funny, if it wasn't so sad...

Was amusing to see the once high n mighty oil savages humbled. Walking in, hat in hand. Can’t believe they cannot continue to bleed money out of the health n souls of their fellow Kern County residents. ONLY interest is SELF interest; undisguised. “We just here for our jobs”. Uh. Yeah. What part of “ THE most polluted city in the nation” don’t y’all understand? Scratch of the head and a continued dull look on their faces. All good things must come to an end... as do all ROTTEN things—such as your shameful and lethal oil practices. Deal with it. Diversify. Or just move. Please. Just move.