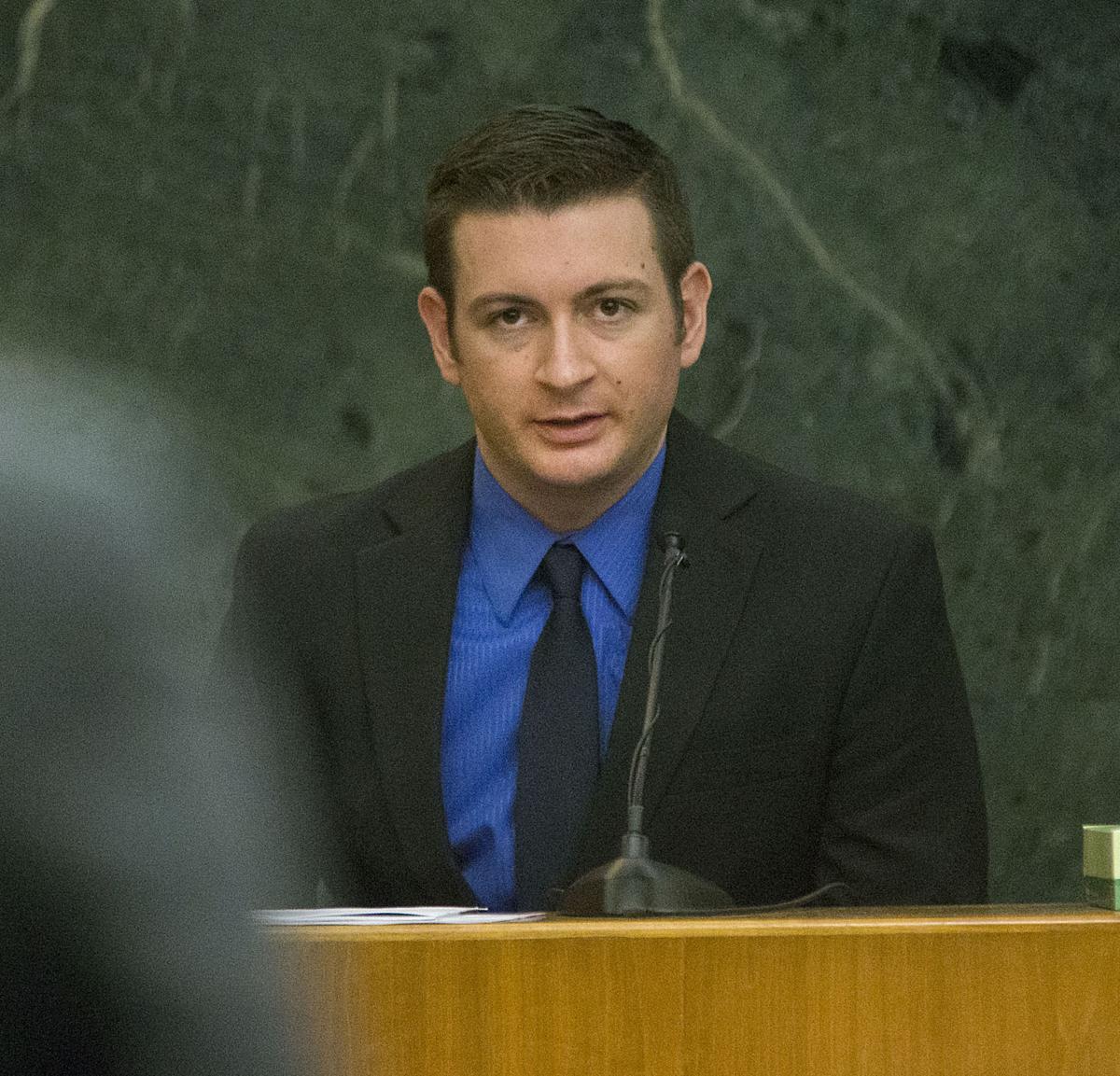 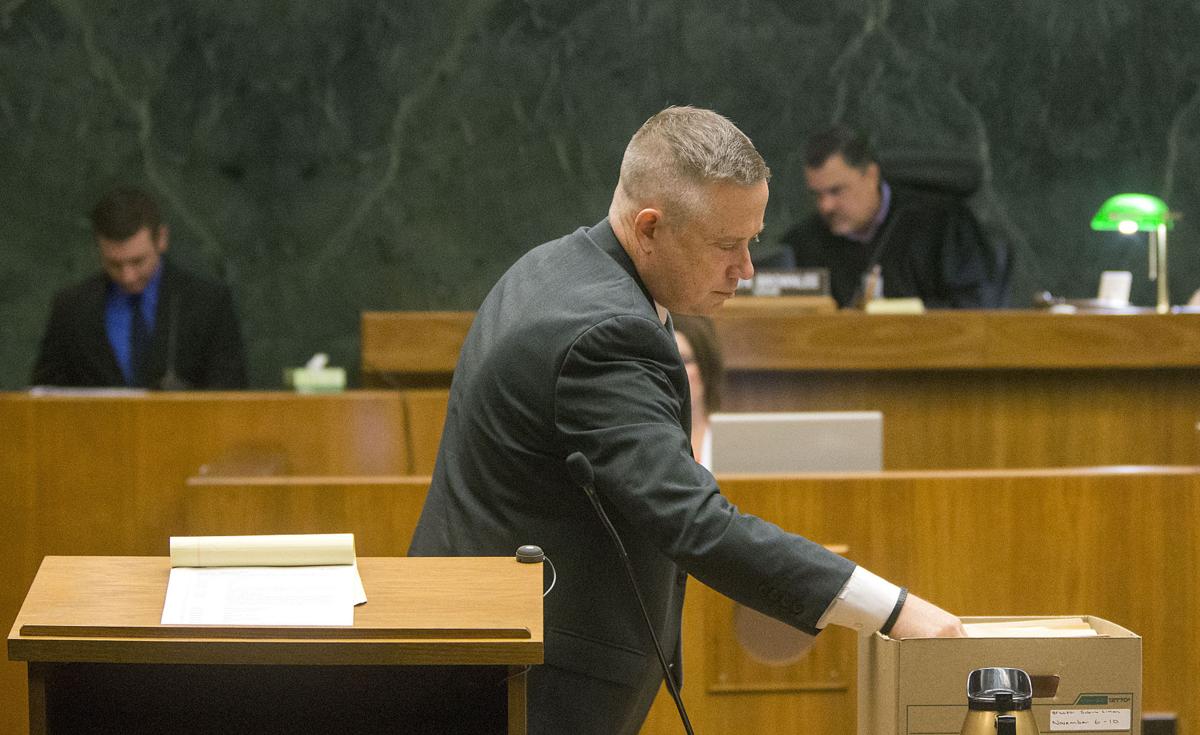 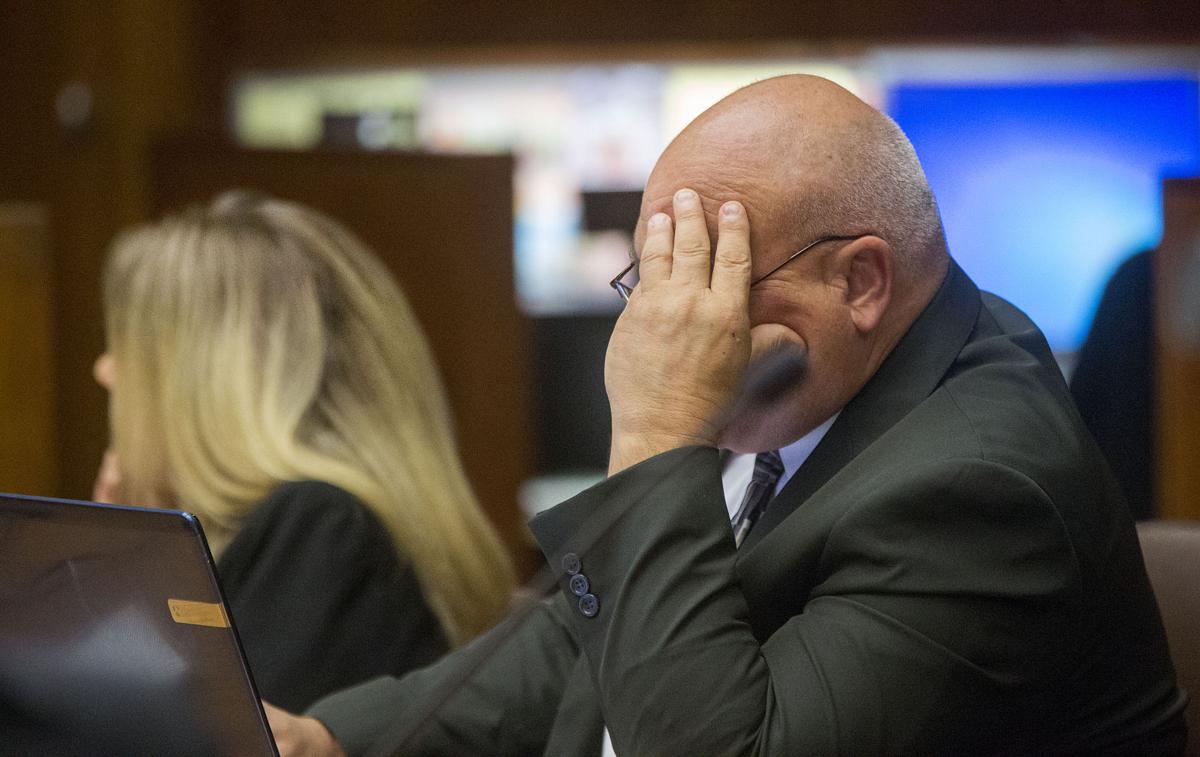 Sabrina Limon's murder trial, in which she's accused of killing her husband, Robert Limon, continues Monday with Jonathan Hearn, with whom she was having an affair, on the stand. Hearn confessed to shooting Robert Limon and is testifying concerning Sabrina Limon's involvement in the murder. At left is Sabrina Limon next to her attorney, Richard Terry. 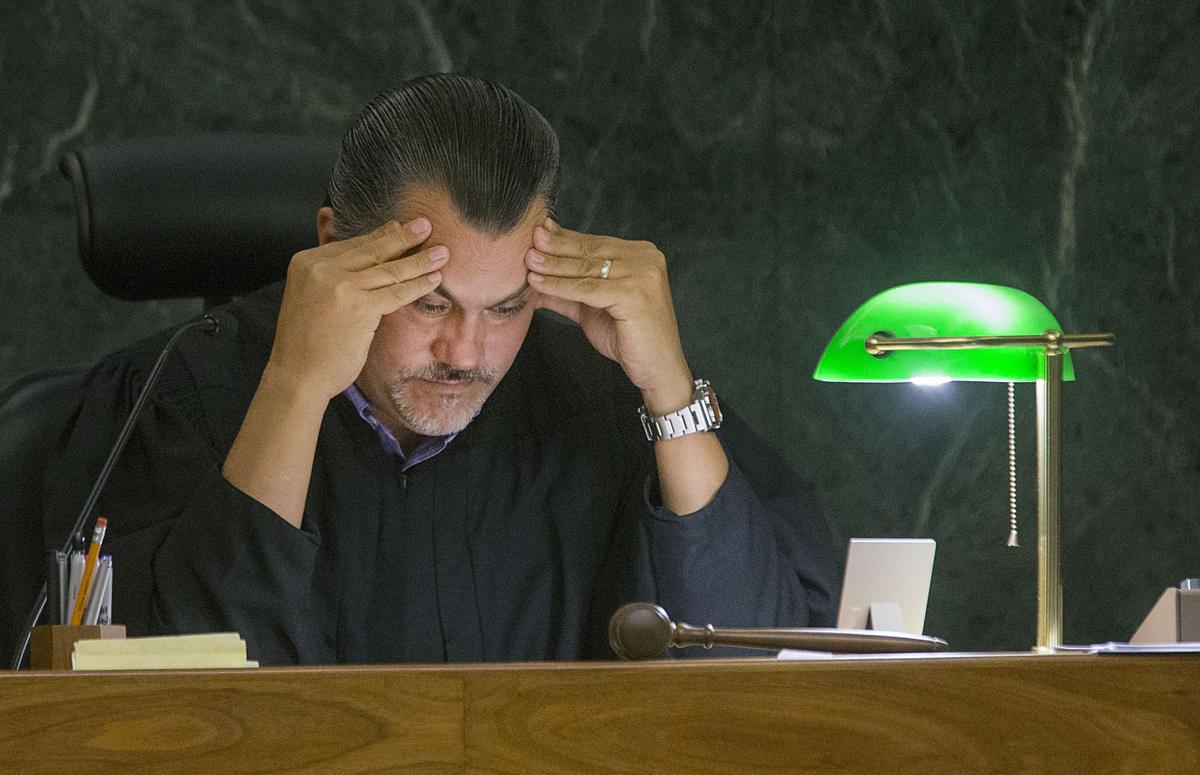 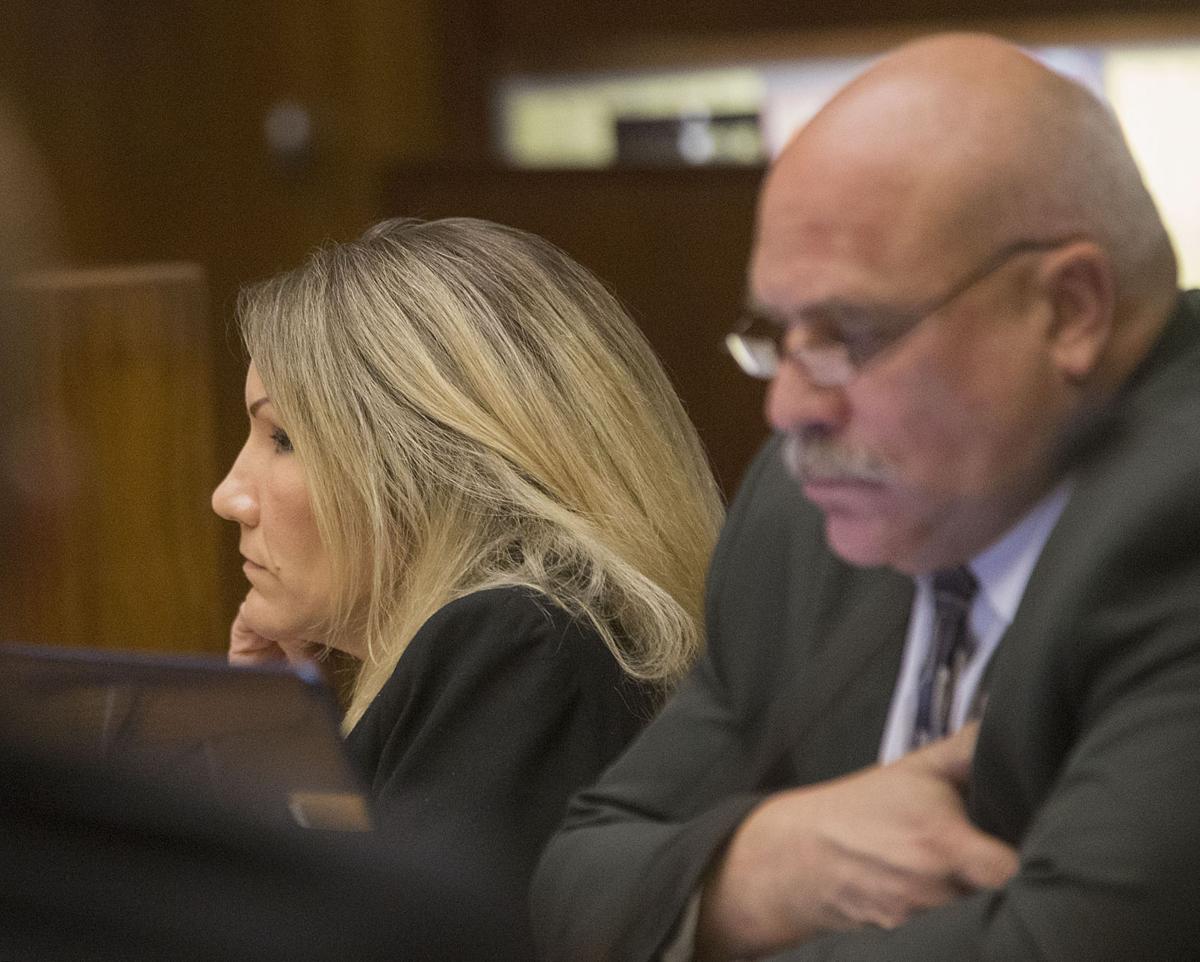 Sabrina Limon's murder trial, in which she's accused of killing her husband, Robert Limon, continues Monday with Jonathan Hearn, with whom she was having an affair, on the stand. Hearn confessed to shooting Robert Limon and is testifying concerning Sabrina Limon's involvement in the murder. At left is Sabrina Limon next to her attorney, Richard Terry.

It was the week of wiretaps in the Sabrina Limon trial, with prosecutors introducing tens of hours of recorded phone calls between confessed murderer Jonathan Hearn and his then-lover Limon in the months after her husband, Robert Limon, was killed.

Although Hearn pulled the trigger, Limon is standing trial on murder charges in her husband’s death. Prosecutors say Limon knew about and helped plan Robert’s murder. Limon’s attorney says she didn’t have a clue. Hearn pled to a 25-year sentence in exchange for testifying against her.

Hours of recordings, typically packed with Hearn’s baby talk to Limon, prayers and sometimes paranoia about the pending police investigation, wore on the courtroom. At the start of each recording, the bailiff would hand a stack of transcripts to reporters.

By mid-week, fatigue was showing. The stacks grew to be at least six inches thick, Judge John Brownlee began rubbing his temples, and at least one juror shut his eyes, appearing to snooze. Prosecutor Eric Smith joked with Detective Robert Meyer during a break that he’d be popping a bottle of champagne after getting through all the wiretap evidence. Before starting cross-examination, defense attorney Richard Terry described it as feeling as if it lasted "a century."

Hearn has been on the stand since Sept. 14; he began to be cross-examined by defense attorney Richard Terry Friday.

Both Hearn and Limon have said some shocking things during phone calls — all placed in November 2014 — that they thought were private. Then on Friday, Terry engaged in a thrilling line of questioning during cross-examination. Here’s a recap of the week’s proceedings, told through quotes:

“Honestly, I don’t have anything and I think we’re running into a dead end.”

— Detective Robert Meyer, during a phone call to Limon.

Meyer called Limon several times with information about leads in her husband’s murder case. Sometimes he would let her know the investigation was running into dead-ends, other times that he was inching closer and having breakthroughs in the case. Nearly every time, Limon called Hearn minutes after hanging up with Meyer. She didn’t know her phones were tapped by police — something Meyer may have been counting on.

— Jonathan Hearn, during a phone call with Limon.

Hearn was relieved when Limon called him after her talk with Detective Meyer. “Everything is fine,” she told him. They prayed to God, thanking him for saving them from having to air their affair in public and be found out. Hearn later testified that they shared in “mutual excitement” and that he thought he had gotten away with murder. He hadn’t.

“In that moment, my stomach hit the ground.”

— Jonathan Hearn, during his Monday testimony.

Hearn described the way he felt when Limon called to tell him she had been in touch with Detective Meyer, and that he was exploring a new lead: the DNA found off a drop of sweat at the crime scene.

“Does it look like we’re the ones involved? Of course. What a disaster.”

Hearn told Limon that police may suspect their involvement because of their affair. “That’s the reality,” Hearn told Limon. He speculated they may have wiretapped their lines, so to throw off what Hearn describes as “an additional audience,” he began creating a false narrative: that he’s suspicious of a man from Barstow.

“David is a lot like you and I, Sabrina. He made a lot of big mistakes and was someone who committed adultery … and went on to kill the guy. He went out of his way to cover up his sin.”

Hearn constantly drew parallels between his life and that of King David, the lusting adulterer from scripture who slept with one of his soldier’s wives, then had him killed to cover it up. He tells Limon that even David was forgiven by God.

“God is in the business of miracles.”

Hearn said this as a way to reassure Limon that they would be able to live out a plan he says they hatched together: to kill Robert Limon, get married, and then for Hearn to become stepfather to Limon’s kids so they could be raised by “Godly parents.” The “miracle,” Hearn testified, would be for the investigation to go unsolved, or be steered away from him as a person of interest.

“Bakersfield itself is pretty sketchy.”

Hearn told Limon he didn’t want her driving to Bakersfield alone for her interview with Detective Meyer because he deemed it unsafe.

Limon said she felt sick to her stomach as the investigation inched closer to Hearn.

“We are so vulnerable. We are dirty spiders dangling from a thread, and all it takes is a little snap to be destroyed.”

Hearn began to have bouts of paranoia as the investigators honed in on him as a suspect. He was afraid his personal life – and his affair with Limon – would be aired in public. Others perceived him, he said, as a “good church mouse,” but he had given his life to “selfishness.”

In November, when the investigators began calling Limon with new leads that inched them closer to a suspect, Hearn lost his appetite.

“I was preparing to start bulking up for the winter because I usually would do that. She discussed that about me – having more muscle would be more appealing.”

Hearn testified about a box of steroids and performance enhancing drugs he had shipped to him from overseas, explaining that he was doping to get muscular for Limon. She had an incredulous look on her face in the courtroom and was shaking her head.

"No way, you're retarded. Not really, but there's no way. I know Jonathan Hearn very well."

— Jonathan Hearn, during a call with Limon.

After hearing police were on to him, Hearn coached Limon on what to say if questioned by Detective Meyer. This is what he suggested..

“Our story will be out there. The lifestyle, the whole thing, and my selfishness.”

Limon and Hearn worried about their swinger lifestyle being made public.

“I deserve a big spanking.”

Hearn was talking about getting a big spanking from God as a punishment for his sins.

"Your evidence is there's an annoying dog and you used him as a test lab rat for poisoning. Then you killed that dog, or you believe you did."

Terry poked holes in stories Hearn told about Limon's involvement in planning Robert's murder, including a salacious plot line about poisoning banana pudding and serving it to him. But Hearn said he first poisoned a dog to test out the arsenic.

"I'm a bit of a poker player. That's what we call a free roll, right?"

Terry described Hearn's deal with prosecutors as a way for him to get off easy after committing a murder "in cold blood." Hearn responded that he "wasn't familiar with the game of poker."

Fearing police were on to him, confessed murderer Jonathan Hearn had bouts of paranoia and, to avoid wiretapping, began using an internet phon…