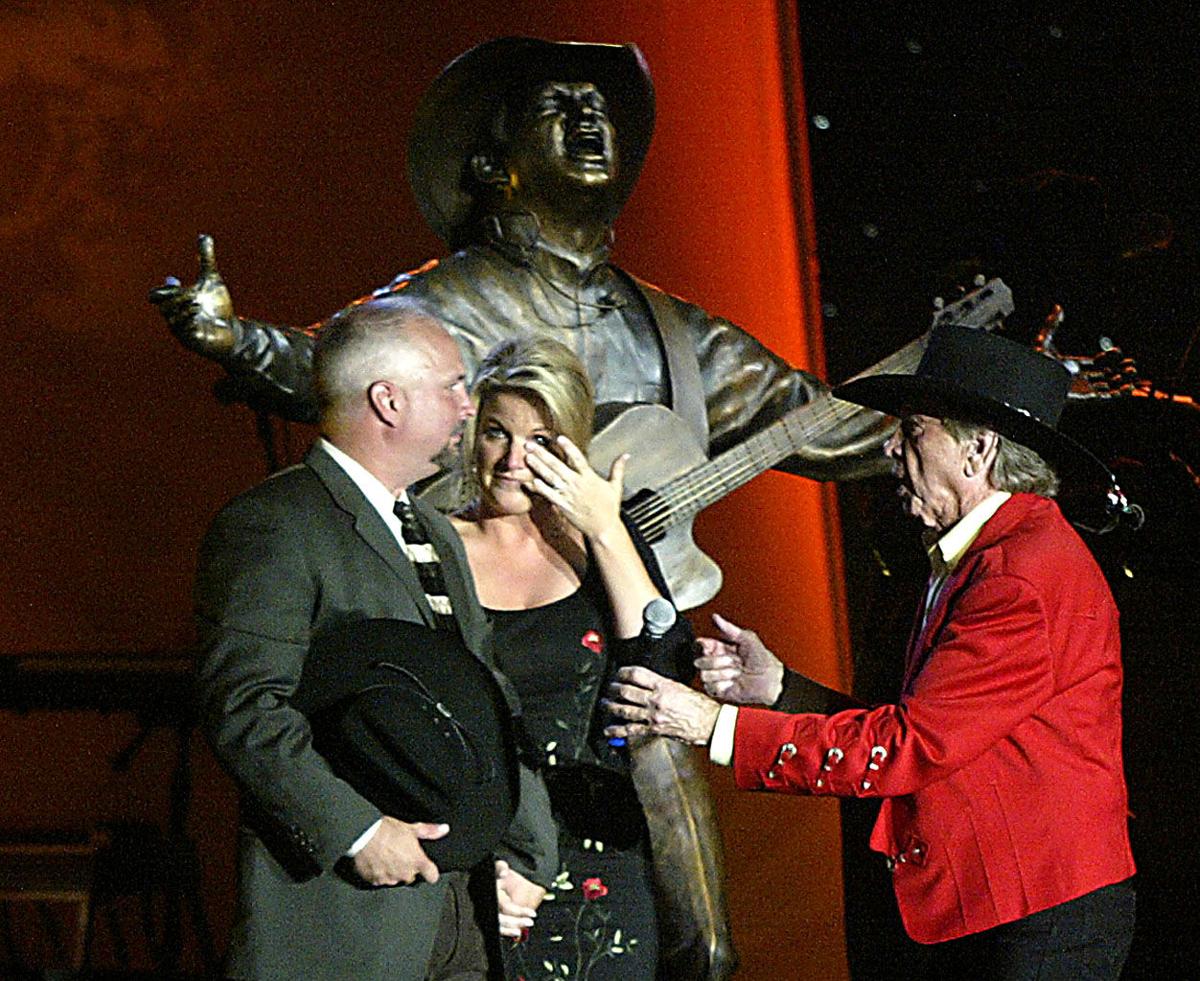 Trisha Yearwood wipes away tears after Garth Brooks stunned her, and 7,000 onlookers, with an on-stage marriage proposal. Buck Owens moves in to offer congratulations. 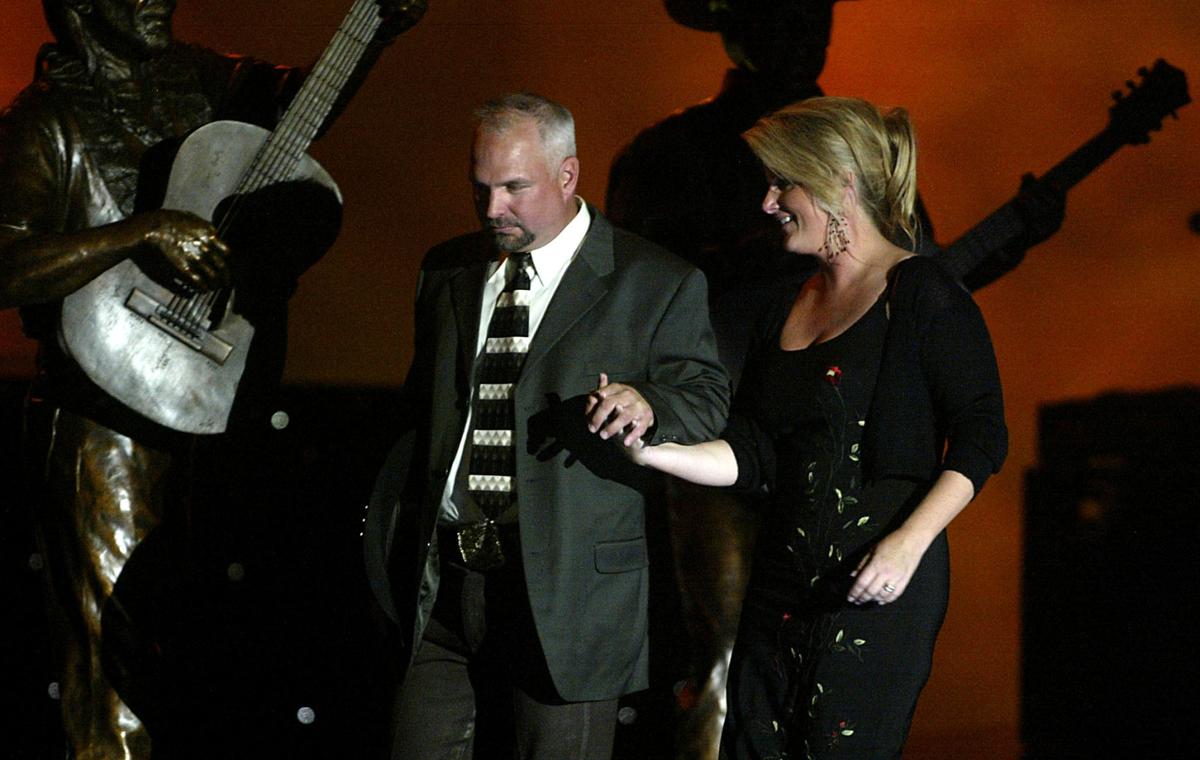 Garth Brooks and his Trisha Yearwood leave the stage at the Crystal Palace in 2005 after Brooks stunned Yearwood by proposing in front of an estimated 7,000 deliriously cheering fans. 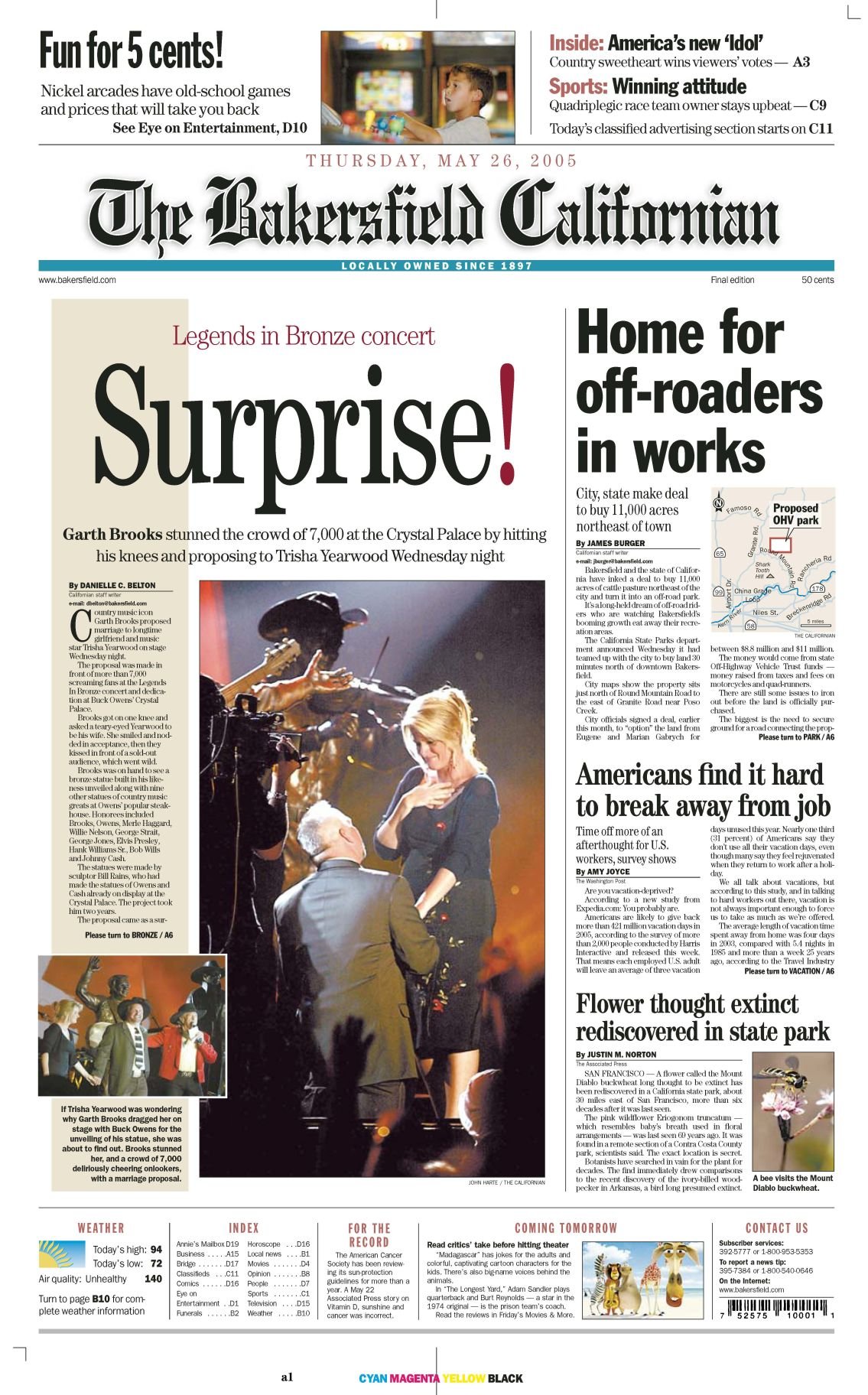 Trisha Yearwood wipes away tears after Garth Brooks stunned her, and 7,000 onlookers, with an on-stage marriage proposal. Buck Owens moves in to offer congratulations.

Garth Brooks and his Trisha Yearwood leave the stage at the Crystal Palace in 2005 after Brooks stunned Yearwood by proposing in front of an estimated 7,000 deliriously cheering fans.

The proposal was made in front of more than 7,000 screaming fans at the Legends In Bronze concert and dedication at Buck Owens' Crystal Palace.

Brooks got on one knee and asked a teary-eyed Yearwood to be his wife. She smiled and nodded in acceptance, then they kissed in front of a sold-out audience, which went wild.

The statues were made by sculptor Bill Rains, who had made the statues of Owens and Cash already on display at the Crystal Palace. The project took him two years.

The proposal came as a surprise at the event where Owens, Brooks, Jones and Haggard were to be honored for their vast contributions to country music.

Brooks and Yearwood have been romantically linked for more than 15 years, but only started dating "officially" after the break-ups of their respective marriages.

Rumors of their nuptials have been floating for years and as recently as 2003.

People came from all over to see the show. Owens, Dierks Bentley, Ray Benson of Asleep at the Wheel, Joe Nichols and Brad Paisley were scheduled to perform.

Before the concert, Owens, Jones and Haggard addressed the press together, arm-in-arm, joking about their years in the country music business.

The former rivals, now contemporaries and friends, laughed it up on a day celebrating the mark they've left on the art form.

"For 48 hours, Merle and I," Owens said of how long he and Haggard could go on trading stories. "We know that many stories and we don't know how many of them are true. And we don't want to find out."

It was Owens' idea to put together the statue series after it was initially proposed in Nashville, Tenn.

The project was moving too slow for Owens' taste so he decided to assemble his own tribute to country's greats in Bakersfield.

"I've known about it for quite some time and I'm excited to be part of the gifted, the selected few," Haggard said.

"Nobody contributed more to country music that these two," Owens said with his arms around Haggard and Jones. "Merle is in the bronze because he deserves to be."

The three said playing music keeps them young and that they never plan on giving it up.

As an honoree, Brooks was humbled to be in bronze amid so many men he admired.

"This is an important night," Brooks said. "Long overdue."

Brooks talked about how in the industry people are used up and "thrown away." He was glad to see the greats would be remembered.

The night began with local band Steve Davis and Stampede, performing on stage with the bronze statues, all covered up, behind them.

Aside from some bleachers set up on the sides, the backlot was "standing room only" as thousands of people watched on as Owens entered to begin the unveiling, first by getting the crowd riled up by shouting repeatedly, "Bakersfield California!" then later, "Nashville, who?"

Gail MacDonald, 41, of Los Osos came to the show after a series of misfortunes, including her home being burnt down.

A longtime country fan, MacDonald was at the Crystal Palace earlier that day when a woman with an extra ticket invited her to the show.

"I think it's great," said MacDonald of the concert and the bronze statues being in Bakersfield. "Perfect place for it to be and the Crystal Palace is such a unique place."

Longtime Bakersfield resident Lana Churchwell, 60, agreed. When the concert was announced earlier this month, she immediately told her son to show up at the Palace at 6 a.m. to stand in line for tickets.

Owens unveiled the statues in the order each country great made their mark in music, starting with Wills then Williams.

Audience members sang along as music played over the video tributes before each unveiling.

With Brooks as the most contemporary artist honored, his statue was unfurled last. After a video tribute to Brooks, the country hit-maker came out with Yearwood to take a closer look at the statue. Yearwood appeared to be straying off with Brooks to look at a statue of Bob Wills when suddenly Brooks got down on one knee, causing the audible gasps of Yearwood and the thousands in attendance.

"This is one of the greatest days of my life. Thank God!" shouted Brooks after Yearwood accepted.

Brooks' announcement nearly stole the show, which was already in high gear before any band set up on the stage.

After all the statues were unveiled and the stage was prepared for the opening act, outside the concert, Bakersfield was abuzz with the engagement news.

"I thought they were already engaged," said Chris Finberg at the popular downtown sports bar and grill Tailgaters.

"The guy's a nut and they'll never see the wedding," said Ernie Bentley.

Bobbitt, a Garth and Trisha fan, heard the wedding plans first when Yearwood was interviewed backstage at the Country Music Awards.

She said she's happy for the couple.

"If two people are in love, they should be together," said Dre' Alexander.

"I wish them luck," said a skeptical Amy Hanson. "For the most part star marriages don't last. One of them is going to have to give up something in their career."