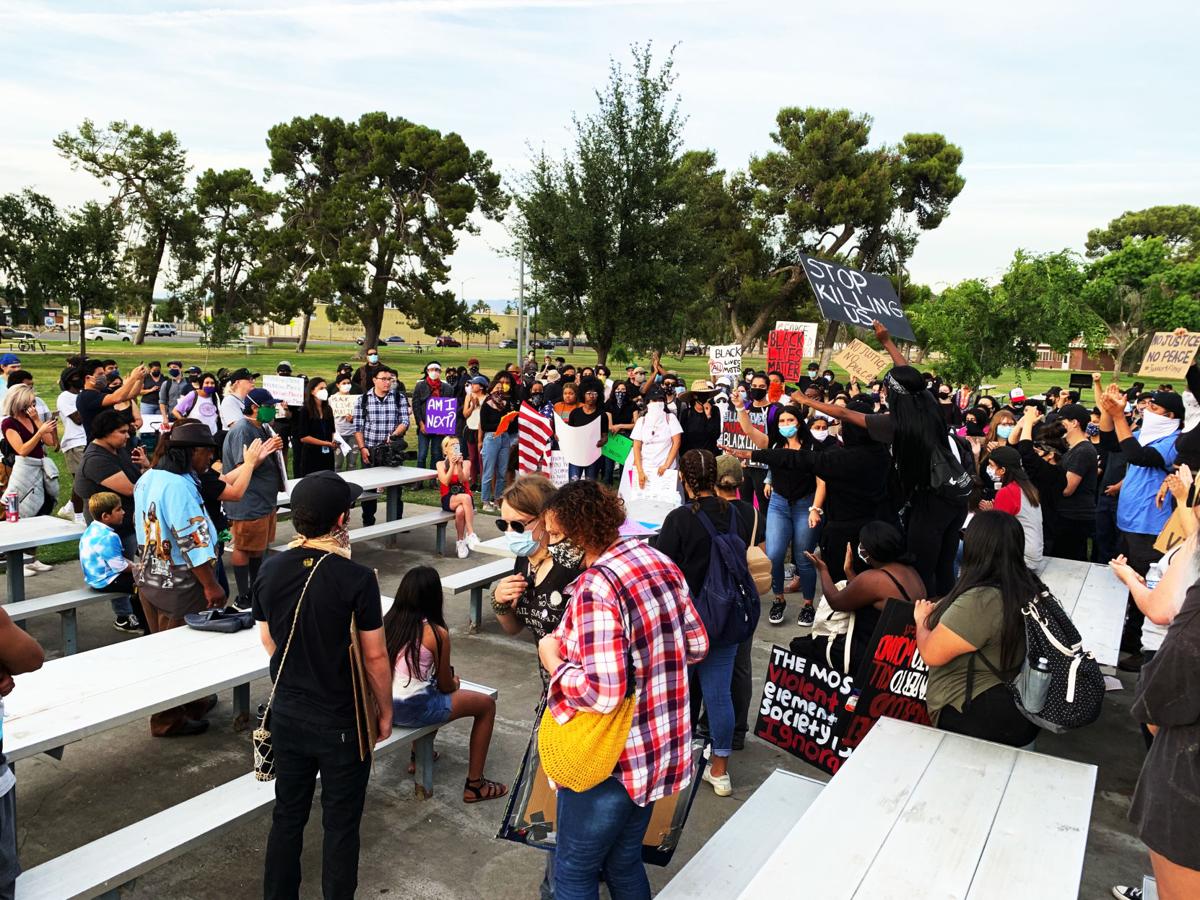 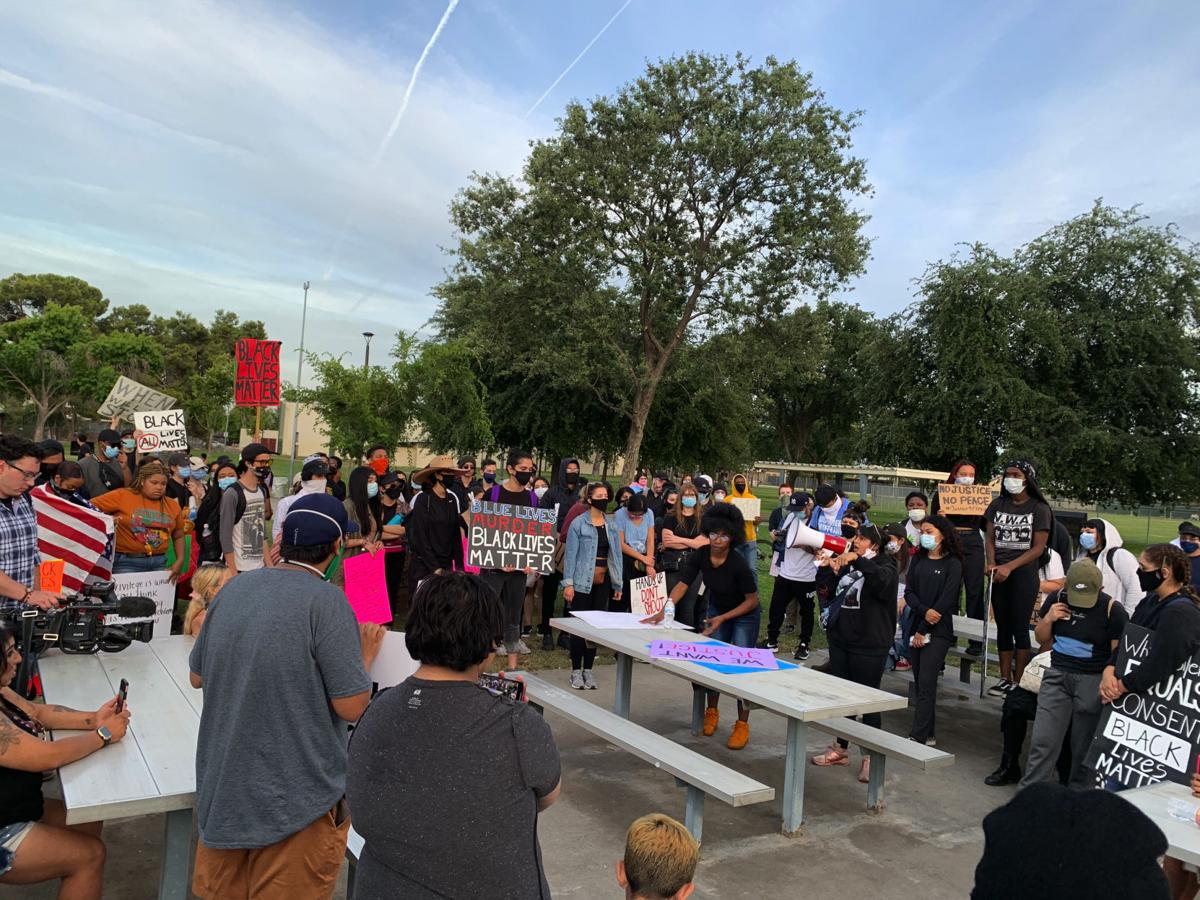 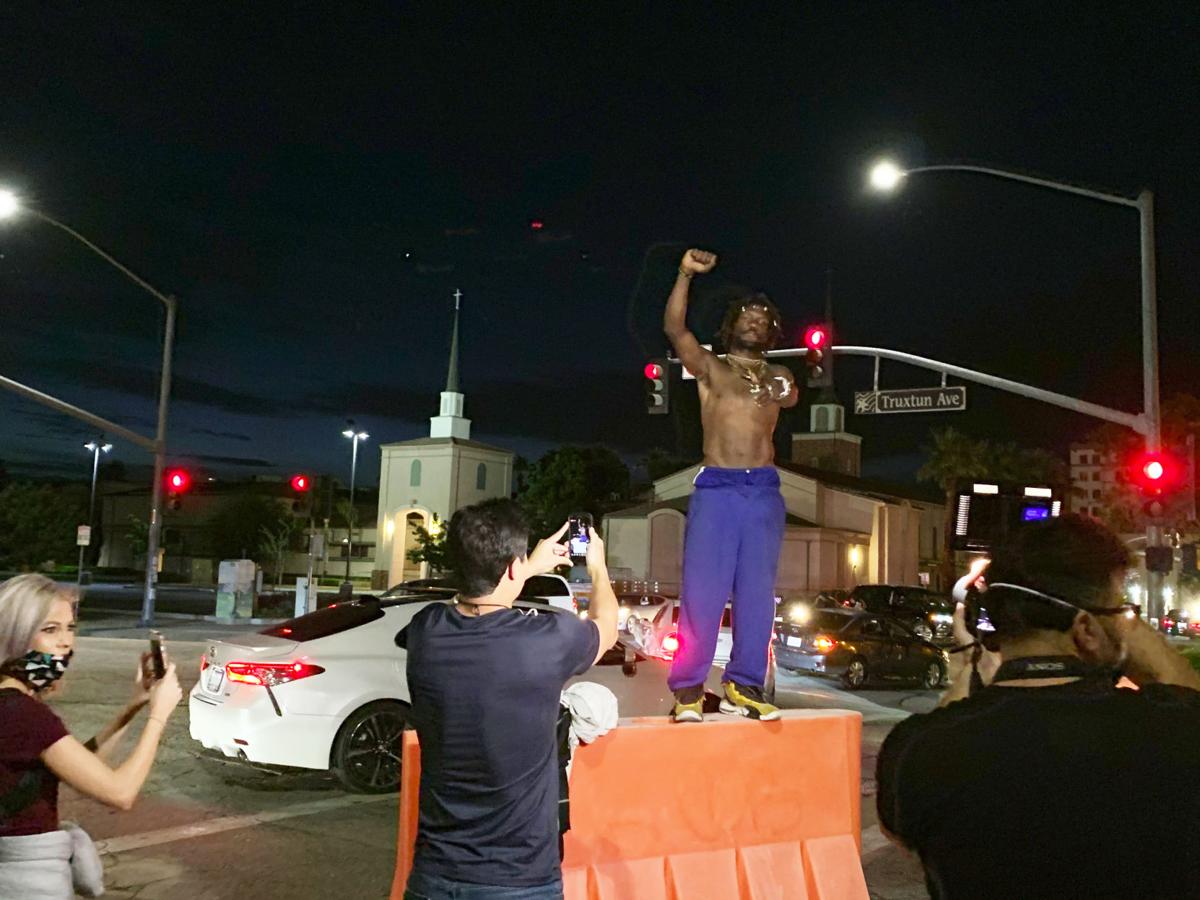 A protester stands atop a barricade the night of May 31 in downtown Bakersfield. 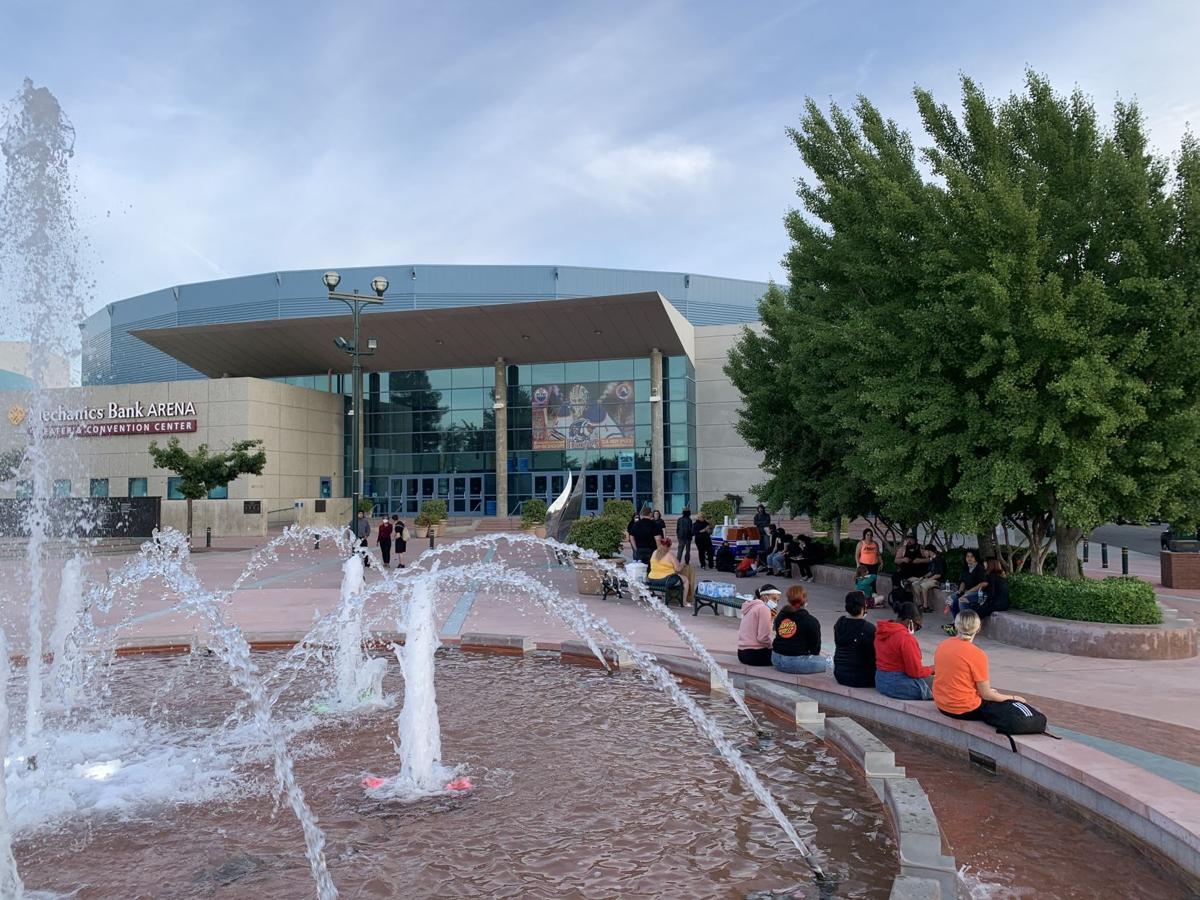 A small group of people gathered Sunday evening outside Mechanics Bank Arena, while others were marching downtown.

A protester stands atop a barricade the night of May 31 in downtown Bakersfield.

A small group of people gathered Sunday evening outside Mechanics Bank Arena, while others were marching downtown.

With a tone that seemed angry yet peaceful, about 200 people marched Sunday evening from Mechanics Bank Arena east to Dr. Martin Luther King Jr. Park for a rally.

It was the third night of demonstrations in downtown Bakersfield and beyond as people spoke against police brutality, racism in society and the Memorial Day death of George Floyd in police custody in Minneapolis.

People took turns at the park on East California Avenue venting their frustrations over a megaphone, accompanied by chants of "Black Lives Matter" and "no justice, no peace."

Masks, pizza and water bottles were passed out among those gathered, a scene that appeared different from the previous two nights. Some children stood on the trunk of a car chanting "Black Lives Matter." No police were immediately noticeable.

Vonnesha Harris marched with the group to MLK Park. She said she wanted to be part of a peaceful protest, and disapproved of the vandalism that had happened the previous two days. She wanted to speak out nevertheless.

"We don't want people to look at our skin and think we are about to break into their cars or about to shoot them. We get ugly stares from everybody," Harris said. "I just want to be equal and I want to do it peacefully."

To Harris, racism and police brutality happen even when the cameras aren't rolling.

After the rally at the park, many marched on N Street, and cars were honking their horns.

Outside Mechanics Bank Arena, a group of South High School students were drawn to the demonstration after seeing videos of police brutality.

Anastacia Briviesa said she had been reading about police abuse of power.

"Our generation, we were born into it," she said. "Enough is enough. I'm done reading."

Her friend Milo Gomez said he showed up Sunday to show support for the cause against police brutality.

"I think that people are finally listening," Gomez said. "It's always been through these types of protests that people actually listen and that's what we need to do now."

While some marched to the park, others stayed at the arena. Truxtun Avenue was blocked off to vehicular traffic at various points in front of the Bakersfield Police Department headquarters and the arena.

As of The Californian's print deadline, the evening appeared peaceful as demonstrators marched from the park to BPD headquarters on Truxtun Avenue. A police helicopter flew overheard.

As of 10:20 p.m., people were gathered on the steps of BPD and standing in the street voicing their frustrations.

I understand the frustration out there and support peaceful protests and civil disobedience and being able to exercise your right of freedom of speech and expression. I years ago was involved in protests and civil rights marches seeking equality for all people no matter who they were. And I agree that peaceful protests and healthy dialogue by all sides to bring about change is necessary. But I was sad to see the looting that was going on by some of the splinter group protesters- who were from all nationalities, races and color- who by their lawless actions took away from the purpose of the protest demonstrations. Looting and Lawlessness has no place in having a peaceful, orderly protest and demonstration.

Amen to that! I think a Warren Commission or sort needs to be formed to look into this and bring the perps who did anything but protest peacefully to justice. Antifa is a cancer and needs to be crushed.

Shame on all those who have been anything but peaceful with their protests and who have stirred up tensions with false narratives from race-baiters and agitators. I happen to believe that the police by and large are good people doing good work and who deserve our respect and support. The actions of a few bad apples do not justify this kind of mayhem. Jason Riley tells more to back up my points: https://www.foxnews.com/media/jason-riley-blanket-media-coverage-floyd-incident?fbclid=IwAR25abxCYRwtq3ymdx-iFO_jBpwEcA4mx6RSPR0UtfQRoAYcYk5tw8qTq5A

The protests went WAY too far. The message was made loud and clear to the authorities from the get-go, and they responded in speedy fashion to arrest the cop who allegedly killed George Floyd. I say allegedly because of reports that the medical examiner found that Floyd did not die of suffocation (see https://www.washingtonexaminer.com/news/george-floyd-family-rejects-medical-examiner-findings-and-will-get-results-of-private-autopsy-monday).

So what we may have here is yet another example of a rush to judgment. Perhaps it’s no wonder that these folks get all worked up when they have been left disappointed time and again when the facts come out to spoil their presumptions. What they should do is let the investigators and prosecutors do their job to find out what exactly happened and then proceed from there within the framework of the law. The only thing I am defending about the cop in question is his due process rights. He has just as much a right to justice as Mr. Floyd does as well as not have that deprived by an angry mob. I would not be surprised if it cannot be proven beyond a reasonable doubt that the cop intentionally killed Mr. Floyd. Granted, it looks bad on video, but that should not be the end-all to the matter.

Again, the protests went far beyond what was necessary, to the point that I believe the protesters were being un-Christian-like and un-American when they knew that prolonging the protests would only trigger more arsons, rioting, vandalism and looting.

I have to think that the majority of Americans are turned off by the protests that have turned out to be counterproductive and perhaps even a treasonous abuse of their freedom to engage in such activity. It will be interesting to see how this affects the outcome of the fall elections. I’ll bet the troublemakers will end up regretting what they have done to not only dishonor the memory of Mr. Floyd but make the issue more about a clash between those who want to build up America and those who want to tear it down.

This is what a call a protest, they are not trying to steal !

You got that right. Sadly their message got hijacked by those with a different agenda, like wanting to destroy America. Russia and China must be so pleased to see this happening. In fact, they very well could be fueling the flames. Dan the Man nails it as usual! As a former member of Obama’s secret security team, he must have seen first-hand how the radicals were fundamentally transforming this country for the worse. https://www.foxnews.com/media/dan-bongino-george-floyd-rioters-are-domestic-terrorists?fbclid=IwAR0Bxr4cTPRna8su3OLd8-wUs1L3qZdJYKQAW2ZURyyZsIlGhs8235IEaYo