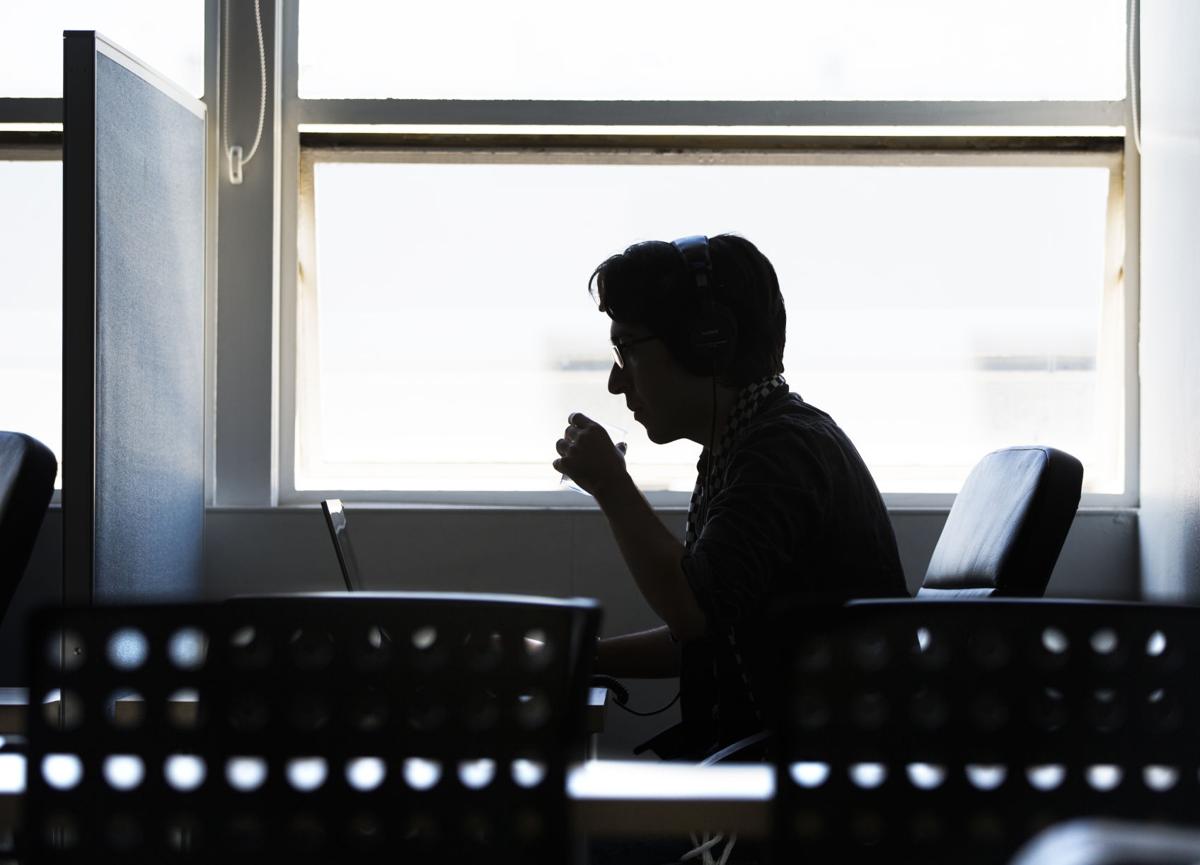 In this 2018 file photo, Tomas Ponce de Leon of Tiny Hat Studios sips on a beverage as he takes a conference call at Mesh Cowork at 20th and Eye streets in downtown Bakersfield. 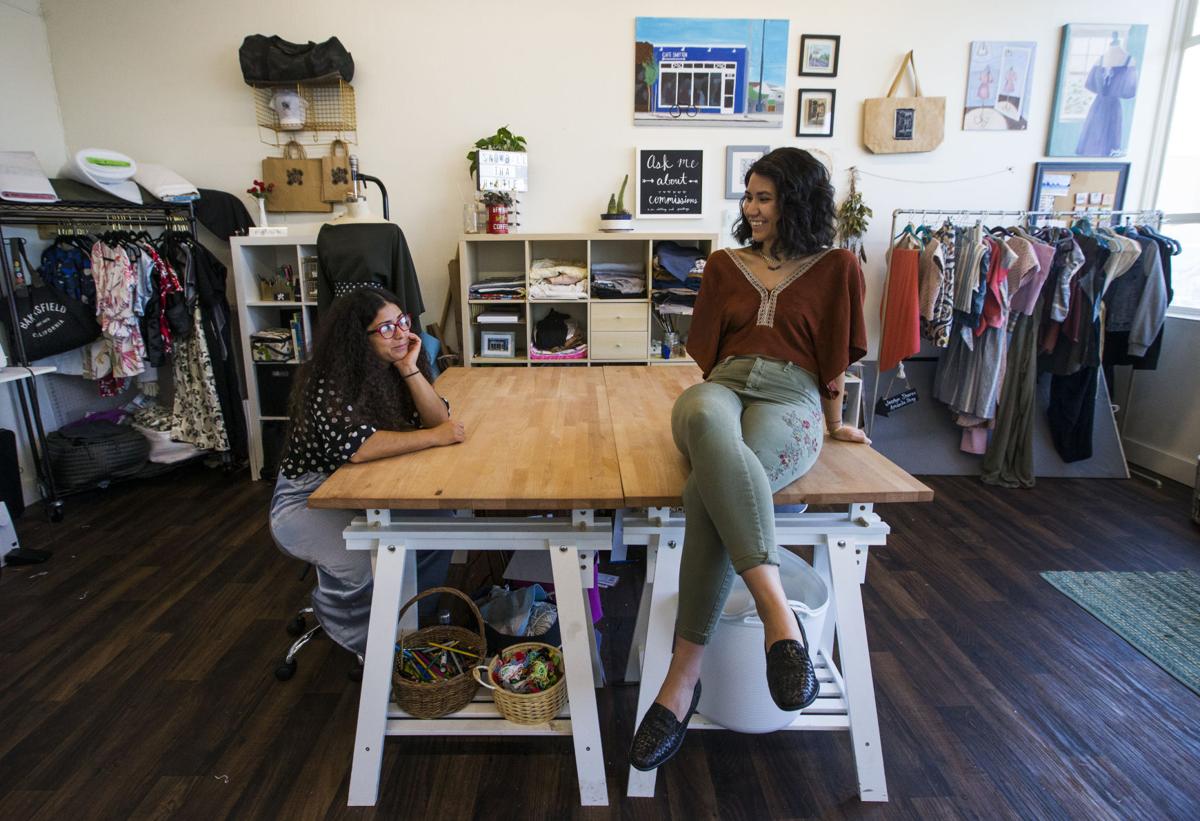 In this 2018 file photo, Jocelyn Dimaya, right, and Amanda Shaffer at Mesh Cowork, where they work above Dagny's Coffee Co. at 20th and Eye streets. Shaffer and Dimaya are founders and co-owners of The Studio.

In this 2018 file photo, Tomas Ponce de Leon of Tiny Hat Studios sips on a beverage as he takes a conference call at Mesh Cowork at 20th and Eye streets in downtown Bakersfield.

In this 2018 file photo, Jocelyn Dimaya, right, and Amanda Shaffer at Mesh Cowork, where they work above Dagny's Coffee Co. at 20th and Eye streets. Shaffer and Dimaya are founders and co-owners of The Studio.

Uncertainty is hanging over Bakersfield's office market lately as companies looking to return to a more normal workplace environment weigh the value of having their entire staff under one roof against the flexibility and potential cost-savings of allowing some employees to continue working remotely.

Local office professionals say hybrid models are beginning to emerge in which some employees have the option of working from home a couple of days per week then spending the rest of their work schedule in an office setting that may end up being noticeably different from the one they left when the pandemic upended daily life about a year ago.

In a sign that employers remain unsure how the situation will eventually shake out, real estate brokers report some office tenants have opted to sign short-term leases rather than commit to standard five- or 10-year agreements in case they don't need as much space as they used to.

"There is nothing clearly defined yet," said Martin Starr, a principal at Bakersfield real estate brokerage and consulting firm ASU Commercial. "I'd say for the most part there is still some decision-making going on and trying to figure out where we're going in the future."

The situation has become more pressing now that people are getting vaccinated against COVID-19 and pandemic-related operating restrictions begin to lift.

Bakersfield human resources specialist Robin Paggi pointed to differing approaches being taken locally. One employer she knows is calling its staff back to the office starting Monday, she said, while another is telling unvaccinated workers to stay home until Kern County enters the state's least restrictive, yellow tier of pandemic restrictions.

"I think we're going to see a lot of variations of how people will return to work," she said by email, adding that some may reflect subjective judgments.

"Despite the tier guidelines for bringing workers back," she wrote, "Kern County employers' return-to-work protocol will probably reflect their personal philosophies on safety, risk, vaccines and the virus itself."

The pandemic's work-life disruptions have been hard on the local office market, slowing leasing activity and nudging vacancy rates higher.

Starr said Bakersfield vacancy rates have recently settled at about 11 percent to 12 percent, up about a point or two from before the pandemic.

Bakersfield real estate broker David A. Williams, senior vice president and principal at Colliers International, said there has, indeed, been a net increase in vacancies but that it has been "manageable." He said no updated market numbers were available to measure the pandemic's full effects.

"The problem is that the deal-making velocity is way off but improving," he said by email.

The market will probably return to better health very gradually, he predicted, with as many as 90 percent of Bakersfield businesses fully returning to their offices by the end of this year.

Driving their return, he said, is the realization that although production seemed to increase early on during the pandemic, it has since slid back some.

Plus, remote workers have found it hard to juggle work and home life, he wrote, and people in general now crave the social interaction they have missed out on. When that happens, he said, "everyone may still need a seat" at their old office.

"I believe the jury is still out but my prediction is that reports of the death of brick-and-mortar office buildings is greatly exaggerated," he wrote.

It may be that whole new, highly flexible work situations arise in the months ahead, said Tabari Brannon, co-founder and general manager of Mesh Cowork, a membership-based, shared-space environment with about 6,000 square feet of private offices, meeting rooms and individualized work stations at the corner of 20th and Eye streets in downtown Bakersfield.

With some employers offering their workers more flexible schedules allowing part-time work from home, Brannon said, he expects his business to pick up. It may be that certain employees will begin to divide their time between a formal office, a home office and something like he offers: a compromise between the two.

Overall he said the pandemic has acted as a catalyst changing the work landscape to a more flexible setting where people come and go.

"It's moved (flexible work scheduling) forward years," he said. "What would've taken years took one year because of the pandemic."

Starr said he foresees a hybrid model rising in which certain kinds of employees are allowed to work some hours or days from home and then spend the rest of the time in the office.

Another possibility is that companies will need just as much office space than they had before the pandemic, which Starr said made people realize it's not always a good idea to have people working in close proximity.

"I think maybe this is an eye-opener for everybody," he said, "that maybe we do need our personal space."

Kern's market for office and retail space continues to face a stiff challenge from the quarantine, though local commercial real estate profess…