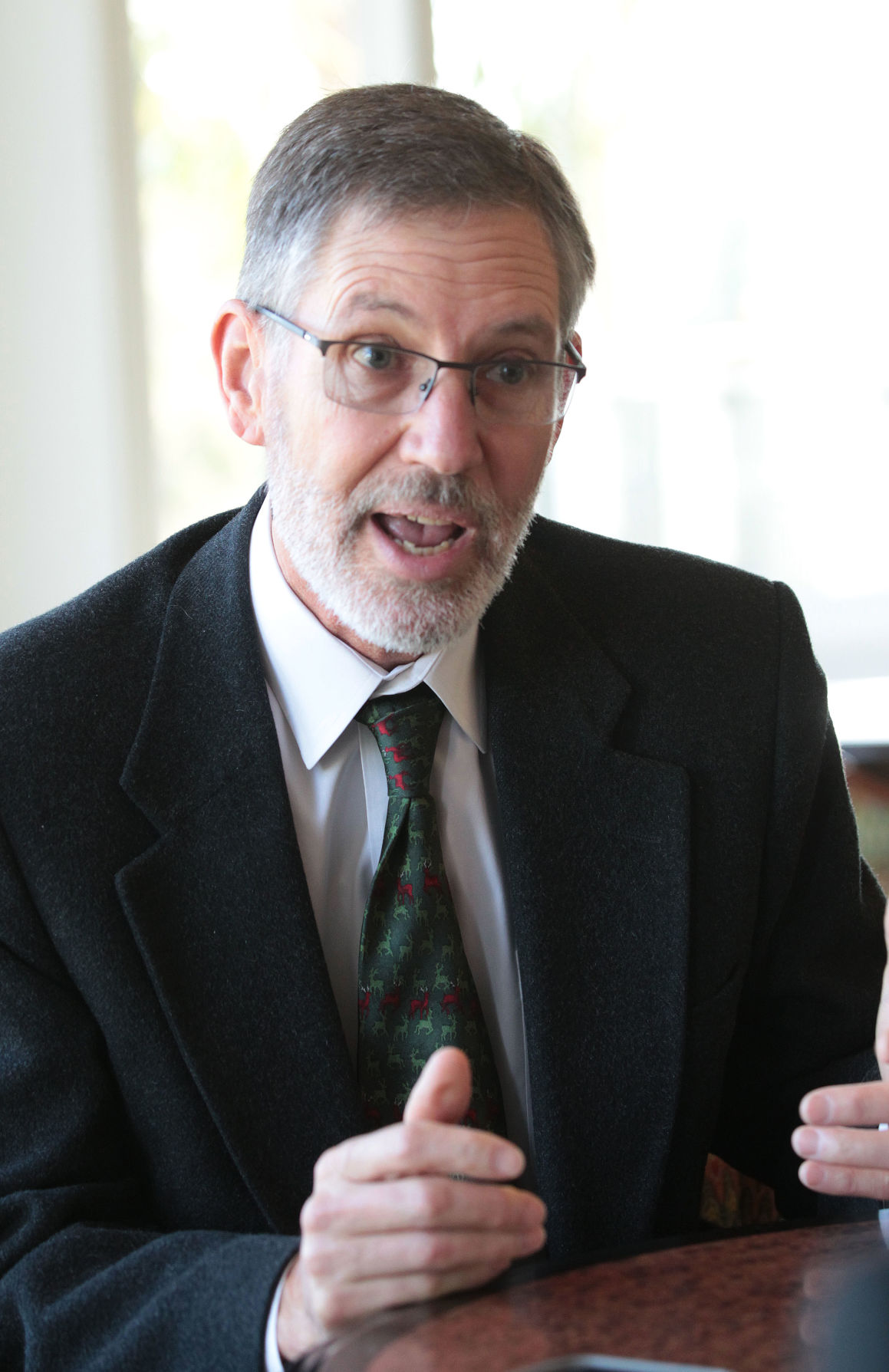 Jim Mayer, director emeritus of California Forward: "We were kind of blind to the consequences" of moving out manufacturing. 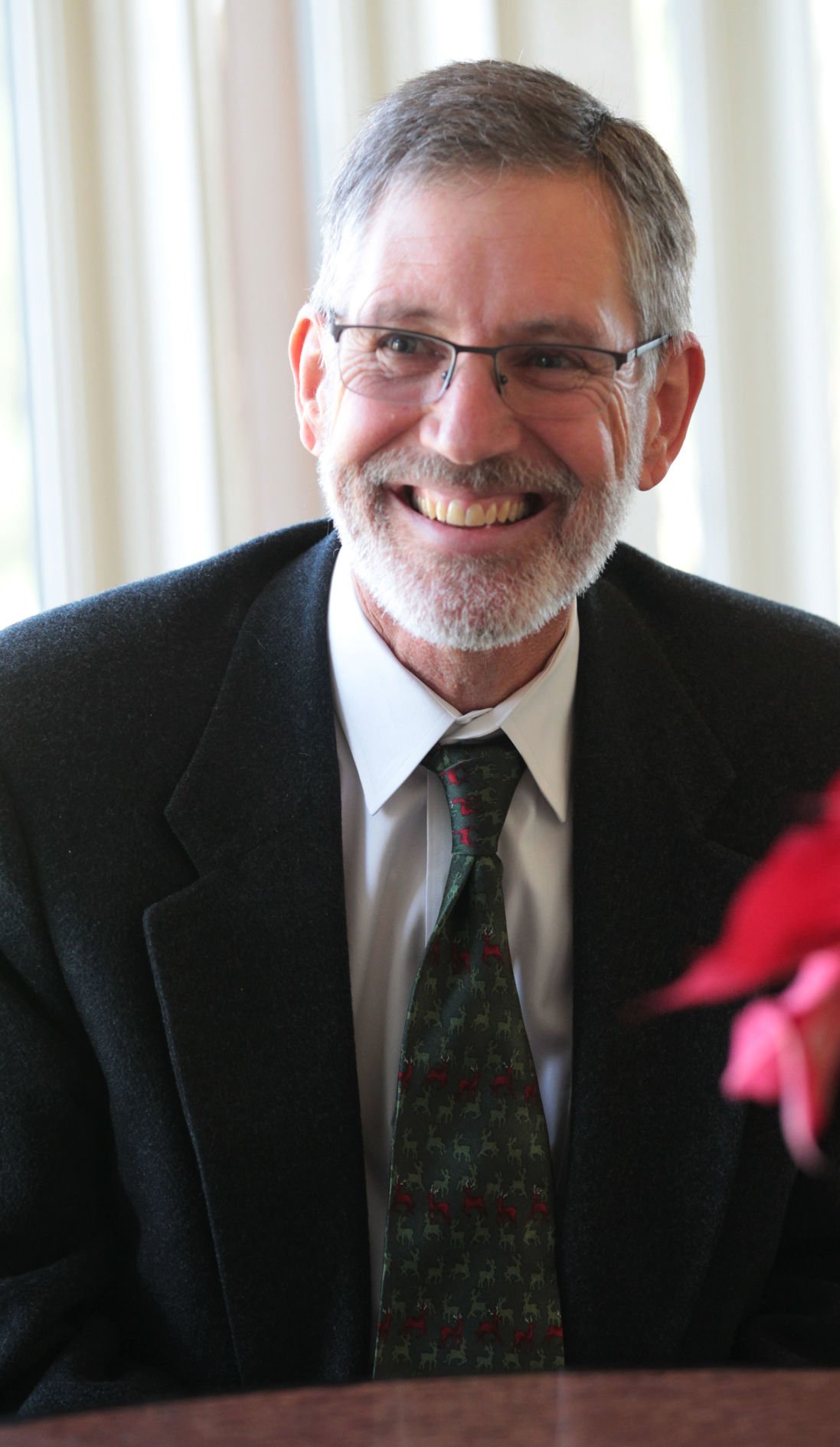 Jim Mayer, director emeritus of California Forward: Expect to see "the automation of the logistics industry, which (is) a third leg to the (economic) stool" in Bakersfield. 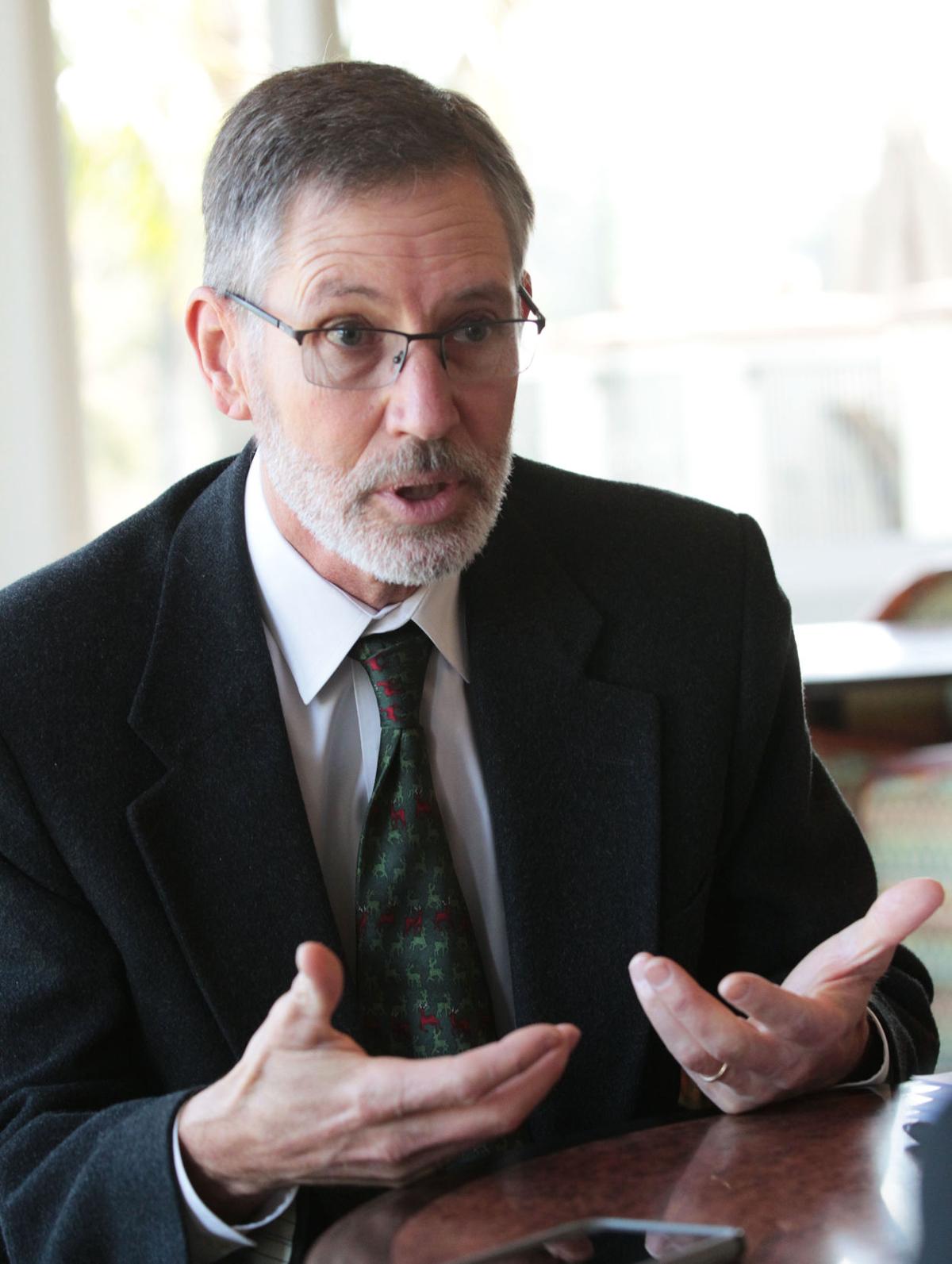 Jim Mayer, director emeritus of California Forward: "You come up with an offensive game plan that puts you at a competitive advantage for future investment." 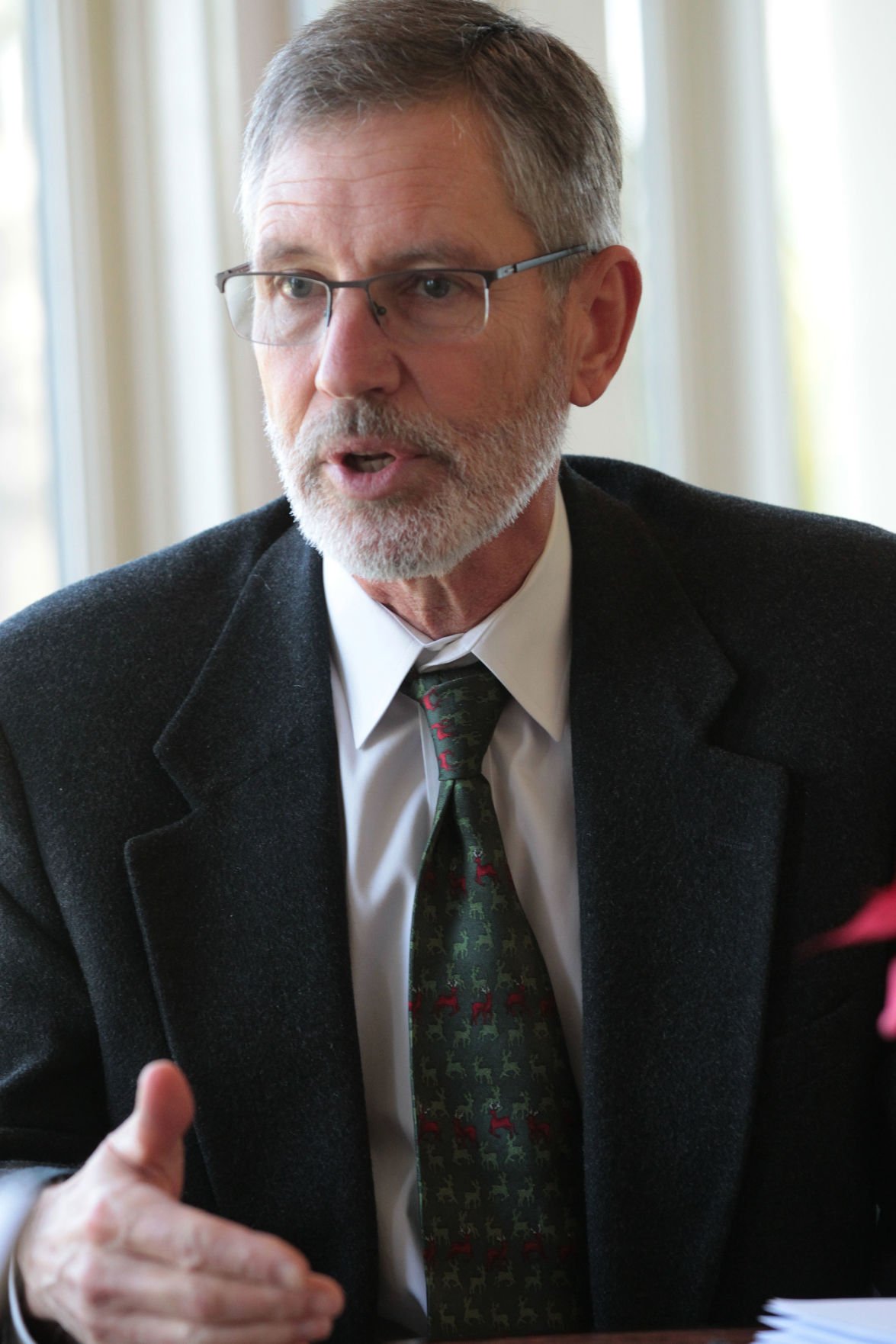 Jim Mayer, director emeritus of California Forward: "Rather than ... inappropriately and unnecessarily inflict pain ... how do we become part of the bridge economy?"

Jim Mayer, director emeritus of California Forward: "We were kind of blind to the consequences" of moving out manufacturing.

Jim Mayer, director emeritus of California Forward: Expect to see "the automation of the logistics industry, which (is) a third leg to the (economic) stool" in Bakersfield.

Jim Mayer, director emeritus of California Forward: "You come up with an offensive game plan that puts you at a competitive advantage for future investment."

Jim Mayer, director emeritus of California Forward: "Rather than ... inappropriately and unnecessarily inflict pain ... how do we become part of the bridge economy?"

He has been a Northern California guy most of his life, but Jim Mayer has a pretty good feel for the San Joaquin Valley, and Bakersfield in particular.

Mayer, director emeritus of California Forward, a Sacramento-based nonprofit dedicated to bolstering the performance of government, was a reporter for The Bakersfield Californian in 1983-87. He went on to a four-year stint at the Sacramento Bee and, concurrently, a three-year quest for a Master's degree in Public Policy from Sacramento State University.

He then worked for the nonprofit, bipartisan, policy-focused Little Hoover Commission for 12 years, most of that time its executive director, before moving to Cal Forward at its 2007 inception.

Mayer was the guest speaker at the 80th annual meeting and anniversary celebration of the Kern County Taxpayers Association, held Wednesday at the Bakersfield Country Club.

He sat down with The Californian for a chat prior to the luncheon. Here are excerpts from the conversation, edited for clarity and brevity:

Q: How did your time at The Californian prepare you for what came later?

A: I covered schools but also a lot of forest stories, a lot of natural resource stories, a lot of desert stories, a lot of land use stories, but at the same time a lot of education stories. Wildfires and earthquakes but also the Bakersfield City School District when, in 1983, they resolved the longest running civil rights lawsuit in the nation. That's when they agreed to create magnet schools. The district was trying to deal with equity and improving performance in disadvantaged communities. I did a series on dropouts and a series on drugs in school and wrote generally about youth and education policy. Then for no logical reason other than (editor) Jim Varley assigned it to me, I spent a lot of time on that two-thirds of Kern County that's beyond the Kern River Canyon. It was really kind of foundational to a lot of work that I ended up doing later.

Q: How did Cal Forward come to be?

A: A group of folks came to me in 2006, a little after the recall (of Gov. Gray Davis) in 2003. (Gov. Arnold) Schwarzenegger came in and led a real strong push for restructuring in government. We were very involved in the Little Hoover Commission but it didn't take off; it wasn't going anywhere. And so a group of business leaders came to me — not the Chamber of Commerce but folks working in education, workforce development, things like that. They said, 'We need to create an organization outside of government that can advocate on behalf of these bigger governance policy changes not from a narrow perspective, but from the broad civic perspective.' And so I left to start what grew into California Forward.

Q. When Gov. Gavin Newsom first started talking about a managed decline of the oil industry in California, which of course affects Kern County more than any region of the state, he said all the right things: He said he realized that oil represents a huge portion of the regional economy and shutting it down will have a tremendous effect, top to bottom, so the state must roll out its plan in an equitable, thoughtful way. We haven't heard much beyond that, but we have seen ever-tighter restrictions on the oil industry. How much should we despair?

A: Well, I think it's inevitable that some transitions for economies throughout the state are ahead, some of them climate change- and carbon-related. Many of these changes will be (toward) robotic and automated and dealing with automation. One of the things we observed in the rearview mirror out of the 1980s and '90s was a whole lot of economic dislocation because manufacturing was moving — a lot of it, candidly, triggered by NAFTA. Rust Belt stuff. And we were kind of blind to the consequences: It turned a lot of people with middle class jobs into minimum wage workers.

I'm not a climate change activist, but I don't think there's any doubt we're going to see policies that seek to decarbonize the economy. That includes the automation of the logistics industry, which of course Bakersfield has been seeking as a third leg to the (economic) stool (along with oil and agriculture). But if you talk to the people in the Inland Empire, where it's been the first, second and third legs to their stool, they're petrified about the rise of the robots. They're going to lose jobs to self driving vehicles and robotic driven warehouse logistics.

Q: What do we do about this looming economic dislocation?

A: A defensive game is only going to slow down what you don't want to happen. You're not going to win that fight over time. You come up with an offensive game plan that puts you at a competitive advantage for future investment and future political consideration.

The frustration for me on the oil issue is, we're not going to do anything tomorrow. I flew in an airplane to L.A. yesterday, I took a bus from there to appear (at the luncheon) today and I'm getting on a train this afternoon to go back to Sacramento, and I'm going to do all of that on hydrocarbons. So, the question is going to be, what's the transition look like? And how do we navigate that transition to minimize the economic dislocation and maximize both economic and the environmental resiliency?

A: We ask ourselves, rather than position this as a zero-sum game where we inappropriately and unnecessarily inflict pain on oil-producing parts of California, how do we become part of the bridge economy? We're going to be using oil in this state and this nation for a lot of years to come. Let's figure out how to make that transition to industries aligned with lower carbon, climate-adaptable goals. I think you could get people to the table around that conversation.

Back in the 1970s, Shell Oil pioneered some research on scenario planning right when the Arab oil embargo was creating these shocks to the global industry. What happens if global, geopolitical conflict limits supply to Mideast oil? What's our future look like? Shell was smart. It allowed them to plan for various futures and pick the future they wanted to move toward. Planning these scenarios helped drive home a solution to the Colombian drug war. It was used to resolve the conflict in South Africa after apartheid.

You bring people together in cases of extreme conflict, people with hurt feelings and vested interests, in the face of insults and trauma, and you find ways to figure out a scenario that makes sense. Something that takes care of those oil workers and those oil industries.

Q: So, look at economic trends, industry trends, and develop a plan based on the direction we're headed anyway.

A: Right. If we step back and figure out where the world is going and position ourselves to take advantage of that, we can at least minimize the dislocation and the harm.

ROBERT PRICE: Is the end of Kern oil production really upon us? Sure sounds like it

Kern County's days as a capital of crude oil production are numbered. California is seeing to that. Bakersfield hasn't reached the end of that…