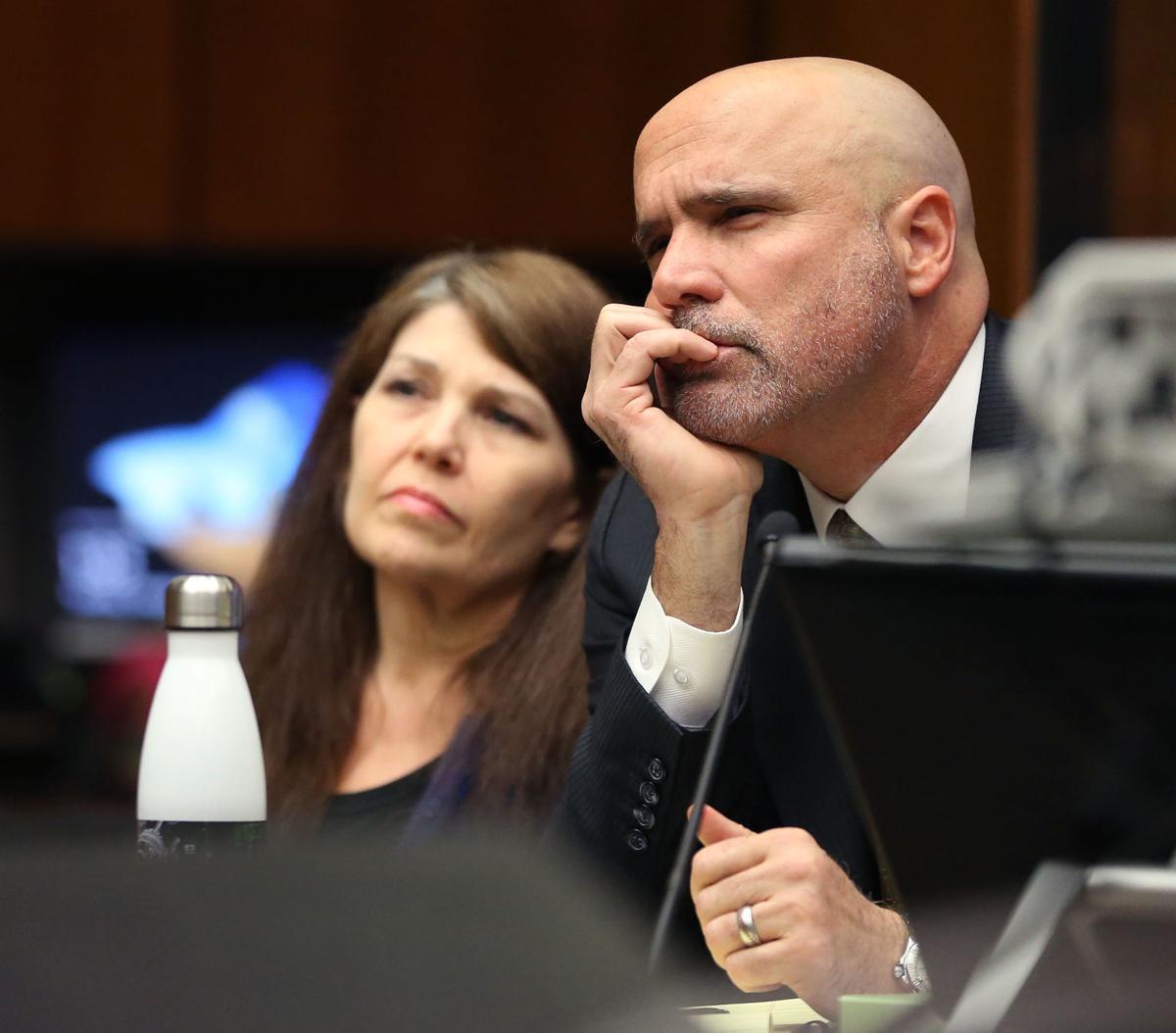 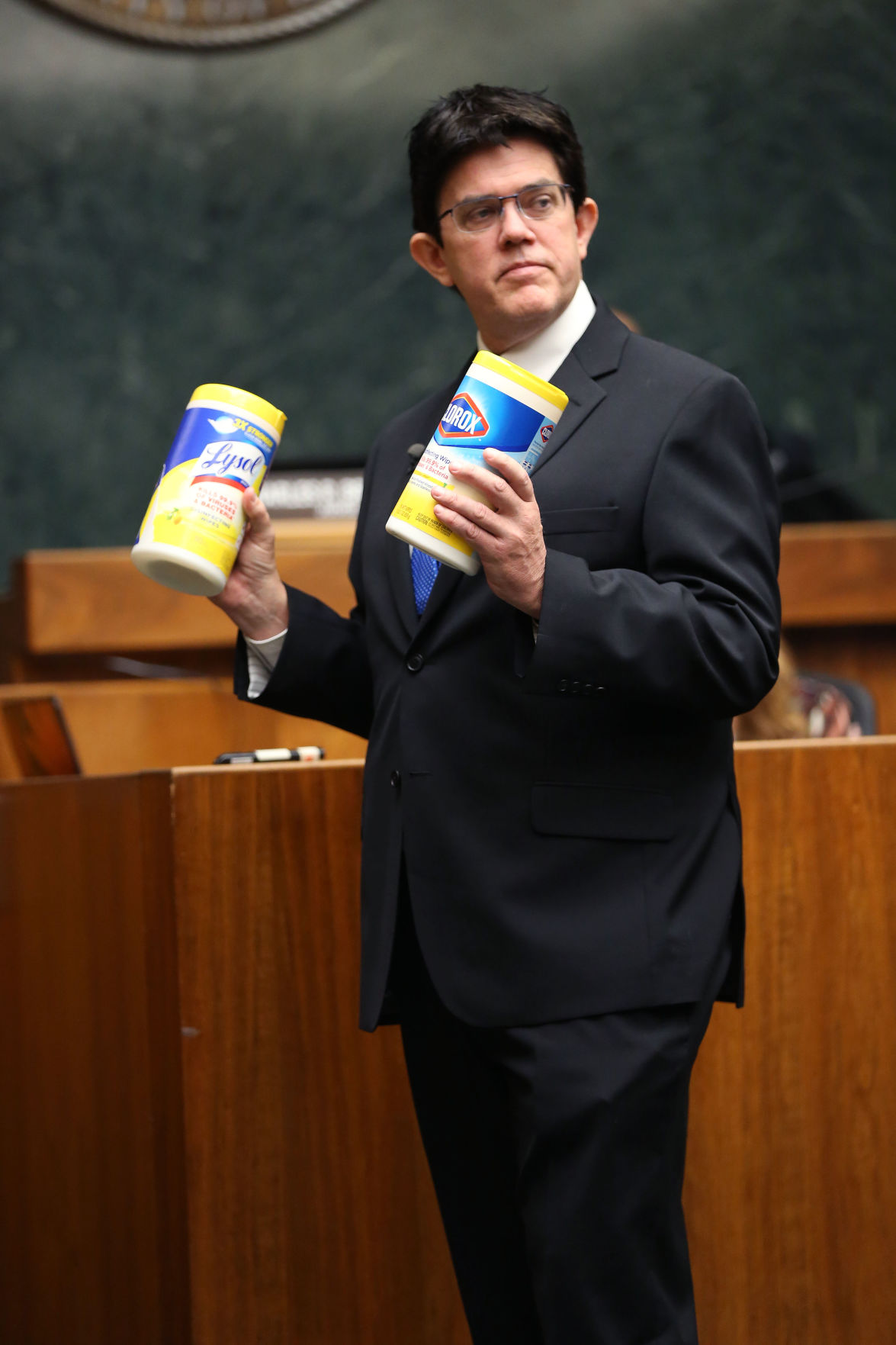 Prosecutor Art Norris holds bleach wipes as he talks to the jury during closing arguments in the Leslie Chance murder trial on Tuesday. 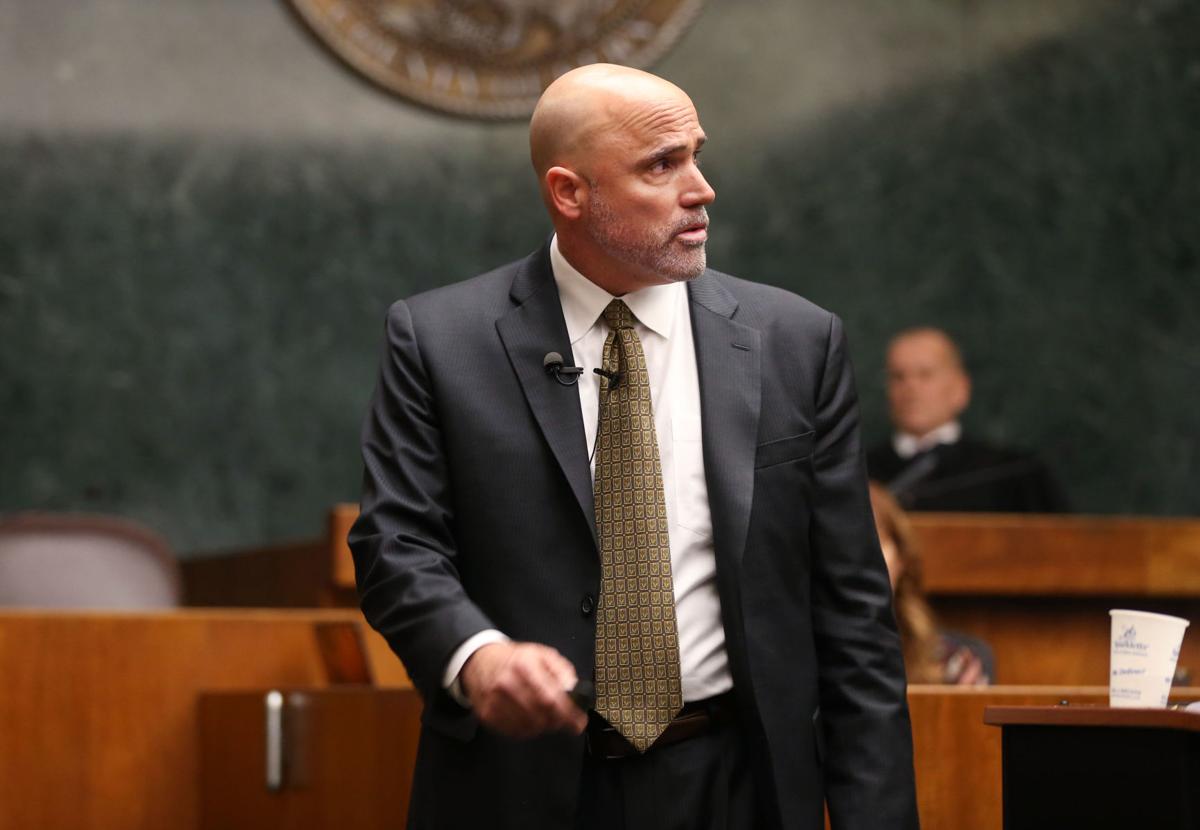 Defense attorney Tony Lidgett talks to the jury during closing arguments in the Leslie Chance murder trial on Tuesday.

Prosecutor Art Norris holds bleach wipes as he talks to the jury during closing arguments in the Leslie Chance murder trial on Tuesday.

Defense attorney Tony Lidgett talks to the jury during closing arguments in the Leslie Chance murder trial on Tuesday.

Driven by jealousy over another woman and a desire to cash in on life insurance rather than divorce her husband and pay alimony, Leslie Jenea Chance “had a carefully conceived, practiced and scouted plan” to kill her husband that she executed on Aug. 25, 2013, prosecutors argued in court Tuesday.

In closing arguments that lasted nearly three hours, prosecutor Art Norris described in detail how he alleges Chance drove with her husband Todd Chance to an orchard near Enos Lane that morning, shot him and left his body there. She then drove his car to a southwest Bakersfield neighborhood and left it in front of a drug house, hoping someone would steal it, Norris argued.

The car was left unlocked, with a key in it and a gun, the murder weapon, visible on the floor of the passenger’s side, he said, adding it was "a baited trap for some poor schmuck to think he just won the lottery.” It was, the prosecutor said, all part of Leslie Chance's meticulous plan to kill her husband and get away with it.

"The evidence has shown that the defendant formulated a plan to kill Todd and make it look like someone else did it — so planning to commit a murder and get away with it," Norris said.

Chance, a former elementary school teacher and principal, is on trial for the 2013 murder of her husband, Todd Chance, a truck driver with whom she had two teenage daughters at the time. The prosecution alleges she was motivated by learning that her husband had rekindled a romance with his high school sweetheart by text message, which the prosecution showed, would have been the second time Leslie Chance was betrayed by a husband. Chance is charged with first-degree murder and has been held in jail since her arrest in late 2016. She has claimed she was home doing laundry and working on a safety plan for her elementary school when her husband was killed.

Leslie Chance's attorney, Tony Lidgett, denied she ever knew about her husband’s text tryst with another woman. In his closing arguments, which got underway but will continue Wednesday morning, he said the prosecution introduced no evidence to prove she did know of it. The whole premise that Leslie Chance was methodically planning to kill her husband for his unfaithfulness was merely an assumption, one of many the prosecution had built its case on, Lidgett said.

Prosecutor Norris described in detail the steps he said Leslie Chance took to carry out the murder, even down to what she was thinking. Todd Chance's phone was found about 30 feet from his body in the orchard because Leslie Chance threw it after killing him, he said.

"She threw the phone because she was angry because she knew what was on the phone," he said, referring to the texts and lurid photos of the former girlfriend’s breasts and genitalia that investigators found on Todd Chance’s phone.

The trial also featured testimony from Chance that her first husband, before Todd Chance, had cheated on her while she was pregnant and she had rebuilt her life after their divorce. Andrea Kohler, the other prosecutor in this case, framed her questioning of Leslie Chance's first husband to suggest that Chance was determined not to let Todd Chance do the same thing to her.

“She worked hard to provide for her family, made more money than him and despite that he was unfaithful,” Norris said during his closing arguments.

The plan to murder was “impressive” and informed by techniques gleaned at a CSI exhibit Chance, her husband and two daughters had visited earlier that summer in Las Vegas, the prosecution argued.

She wiped the car with bleach to eliminate DNA and fingerprints and she changed her shoes, Norris alleged, which were all techniques touched on in the CSI exhibit about crime solving. He pointed to surveillance footage from inside a Starbucks that allegedly showed Chance disguised in a hat and sunglasses carrying a bag with a cylindrical container of bleach wipes. Norris cited testimony from experts who talked about how unusually little DNA and fingerprints were found on Todd Chance’s vehicle, a beloved and well-cared-for Ford Mustang that should have been loaded with such imprints.

Lidgett, who began his closing arguments with under an hour left in the day, attacked the assumptions on which he said the prosecution built its case. Chance had no knowledge of her husband’s reconnection with an old girlfriend, and she did not have any motive for cashing in on their life insurance.

“She had a great job. She was a principal making six figures,” he said.

To cast further doubt on the prosecution’s theory, Lidgett pointed to certain evidence in the case that raised unanswered questions. Todd Chance had announced he was going for a drive in his sports car the day before his death. But when his daughter Samantha asked to go along, he said no, according to witness testimony. And when she asked to go with him to a gun show the next morning, he also said no.

"This is something she and her dad loved to do," Lidgett said. "So why is Todd not letting his daughter go with him on a cruise or to a gun show?"

"For those of us that have kids," Lidgett said, "if your baby girl wants to go, she gets to go."

Lidgett also questioned why Todd’s cousin and best friend, William Glapenske, never told anyone at the time of the murder that he and Todd Chance had been out with each other the night before he died. Glapenske waited until the trial to mention that, Lidgett said, seeming to imply that Todd may have been doing something the day before he died that he didn't want his family to know about.

“What was Todd and cousin Billy hiding?” Lidgett asked.

In their last effort to convince jurors that Leslie Chance is a murderer who shot her husband and dumped his body in a rural orchard, Kern Cou…