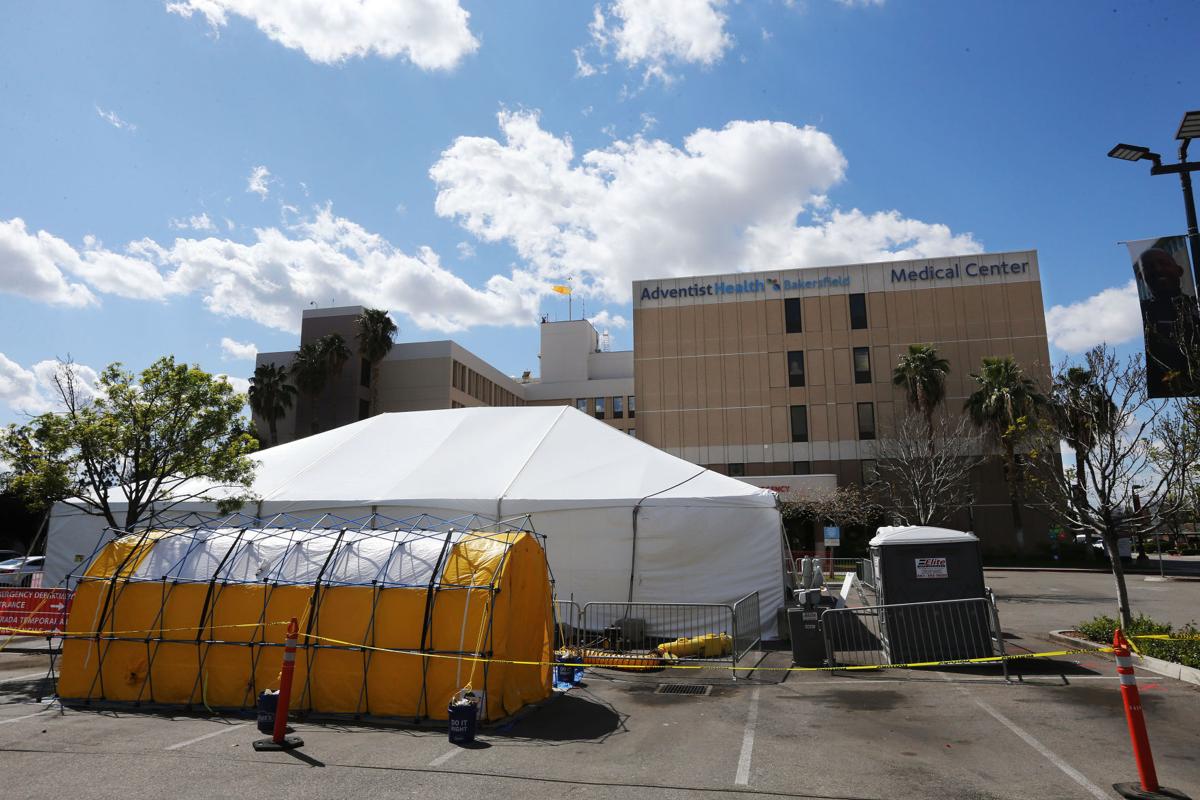 Adventist Health Bakersfield has set up a medical tent on its campus along Chester Avenue to support its response to the coronavirus pandemic. 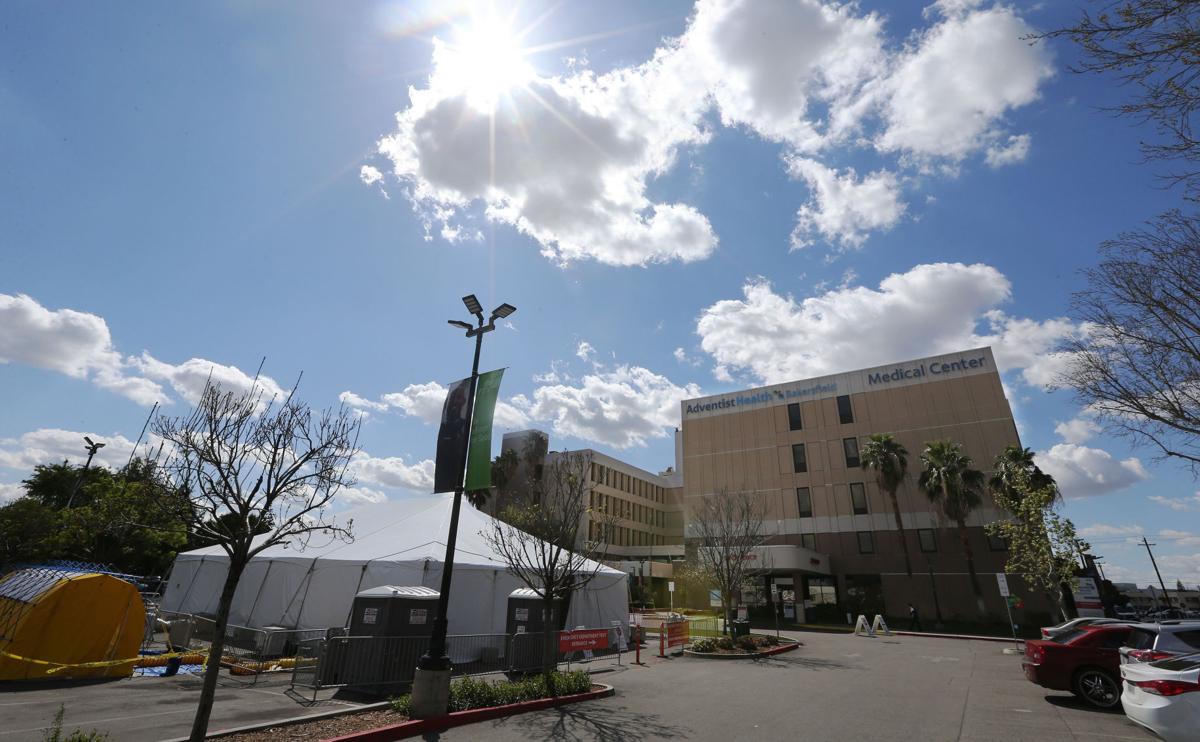 Adventist Health Bakersfield set up a medical tent on its campus along Chester Avenue to support its response to the coronavirus pandemic in March.

Adventist Health Bakersfield has set up a medical tent on its campus along Chester Avenue to support its response to the coronavirus pandemic.

Adventist Health Bakersfield set up a medical tent on its campus along Chester Avenue to support its response to the coronavirus pandemic in March.

Hospitals and medical clinics across Kern County are setting up triage tents, stocking up on medical supplies and drawing up various contingencies in preparation for the possibility — some say likelihood — of a local surge in COVID-19 cases in coming weeks.

Plans call for setting up makeshift hospital beds in outpatient facilities and dividing up existing rooms to handle patient care. If there is no room to spare locally, overflow patients could be transferred to other medical centers, assuming such capacity exists elsewhere.

"If we underreact, people will die. If we overreact and nothing comes of that, then we will be successful,” said Jim Suver, CEO at Ridgecrest Regional Hospital.

The preparations are based on projections that Kern's health care system, like others across the nation, could quickly become overwhelmed if social distancing measures fail to slow the spread of a highly contagious virus that has already infected more than 120,000 U.S. residents and killed more than 2,000 since arriving in the United States about two months ago.

Kern County now has 46 confirmed cases, according to the latest numbers released Saturday morning, and the first death from the virus was reported on Friday. At least seven people have been hospitalized due to the virus at some point, health officials said Friday morning.

Local public health officials and hospitals have been guarded about discussing their internal assessments about how bad the situation could become.

Instead, the focus remains on urging people to take responsible steps to avoid infection, such as frequent hand-washing and keeping a safe distance away from others. The hope is that such measures will "flatten the curve" and prevent a spike in new cases requiring mass hospitalization within a relatively short period.

Dr. Mark Ghaly, California’s top medical adviser, said Wednesday that COVID-19 cases in the state continued to double every three to four days and will likely result in a surge of patients at hospitals in the coming two weeks, the Los Angeles Times reported this week.

Whether that situation holds true in Kern is hard to determine at this time, said Kern County Public Health Services Department spokeswoman Michelle Corson, because "we are still very early in the number of cases being reported, so the doubling rate is very unstable."

Dr. Grace Tidwell, a Bakersfield family practice physician who has helped coordinate Omni Family Health's response to the pandemic, pointed to projections by the University of Washington's Institute for Health Metrics and Evaluation.

Her interpretation of the institute's work, which is based on factors such as when school-closure and stay-at-home orders were issued, suggest a surge of local cases could be two to six weeks out.

Scenarios drawn up by the Harvard Global Health Institute and reported by nonprofit news organization ProPublica envision the possibility that the Bakersfield area would have enough hospital beds only under the best case of only 20 percent of local adults becoming infected over a period of 18 months.

Under the worst-case scenario, in which 60 percent of adults contract the virus over a period of six months, the Bakersfield area would need about three times as many hospital beds as it has now, according to ProPublica.

That grim assessment is based on an assumption that more than a fifth of all local cases require hospitalization, as has been the case in other countries. It also supposes that a fifth of hospitalized patients would require intensive care, such as the use of a ventilator.

There are 1,222 beds and 127 intensive care unit beds among Kern's 10 acute care hospitals when operating in normal capacity, according to county health department figures provided to The Californian on Friday.

There are 235 ventilators disbursed among the 10 acute care hospitals and an additional 80 ventilators available to be deployed to hospitals if needed, the department said.

"We are currently in daily contact with our local hospitals to ensure they are not approaching bed, ICU, or ventilator capacity. We are working closely with all of our partners to ensure we are ready to respond, should we reach surge," Corson said.

With a potential surge in mind, and in consideration of communications by local public health officials, Omni has stocked up on oxygen tanks and worked to secure extra albuterol inhalers, Tidwell said. The outpatient-only health care provider also is looking at providing food for workers who may be asked to work late, as well as figuring out how to provide child care for their families at home.

She urged local residents to come up with their own plans, including fallback child care plans, in case the surge materializes.

"I think it’s important for people to have a realistic idea of what’s to come,” she said.

A spokeswoman for Bakersfield Heart Hospital said by text message the medical center is prepared to increase its inpatient bed capacity by 40 percent, to a total of 67, if a surge arrives. That would be accomplished by converting outpatient beds, she said, and staffing them with personnel normally dedicated to elective medical procedures.

Adventist Health, which has hospitals in Bakersfield, Tehachapi and Delano, said it is closely monitoring its inventory of supplies and, if a surge comes about, will adapt rooms and supplies as needed.

A company spokeswoman said by email Adventist would also look to tap sister hospitals and resources elsewhere in its hospital system. She declined to say whether Adventist expects to expand its intensive care unit capacity and inventory of ventilators and bring in extra medical staff in preparation for a surge of COVID-19 cases.

Dignity Health Mercy & Memorial Hospitals, owner of three Bakersfield hospitals, said in an emailed statement its preparations are being made in consultation with local, state and federal public health and regulatory agencies.

While it, too, declined to provide details, Dignity stated it has identified locations at each of its local facilities where care for infected patients can be provided in a way that avoids exposing the general patient population. Barriers would be set up within existing facilities or in tents outside hospitals, it said.

If its bed capacity is insufficient, patients could be transferred to sister facilities or nearby health systems, it said.

Suver, at Ridgecrest Regional Hospital, said in a phone interview that securing an adequate supply of personal protective gear, equipment and even beds has been "a challenge for us as much as it is for every hospital in the U.S."

As a result, the hospital has had to be judicious with its staff's use of masks and other protective gear, he said.

He urged members of the public to act responsibly to limit the virus's spread.

"We continue to push the message: Help us help you," he said. "Social distancing. Don’t get in groups. When it’s senior hour in the grocery store, don’t have a lineup that’s not seniors."

KERN CORONAVIRUS CASES, BY THE DAY

OTHER CONFIRMED CASES IN THE CENTRAL VALLEY

Local cases of coronavirus increase by six, bringing total to 46

Six more Kern County residents have tested positive for coronavirus, bringing the total to 46, according to the Kern County Public Health Serv…

Why is our comments being deleted. Is this a Canada thing or a political thing?

All Gas Pump Station Buisnesses should from the beginning of this virus outbreak have a attendant in proper protective equipment pumping fuel preventing the spread. Govener Newsome put that in the pandemic response plan and enforce it.

There is no serious threat here. The only threat is the fear that being propagated. As the article states, they are overdoing it and preparing for worst case scenarios. The testing stations I pass by lately are all empty. The hospitals are at normal capacity and many people are doing the safe things like keeping distance etc. Self fulfilling prophecy is what gets the majority sick. They fear the sickness intensely and they become magnets to the virus. Also, many false positives have been reported. I'd stay away from people with masks also as they tend to drip saliva all over and they wipe their chins with their hands then grab things like door handles and shopping cart handles. If you are sick stay home! Those who are healthy are able to get out and do essential travel and exercise.

As long as they are going the speed limit they are good. Also, many people are getting out as they have the right to work, go to essential places, and exercise. If you feel the need to stay in 24hrs a day do so, but don't hate others for utilizing their rights.

So, Bakodon, which of those folks at the Fastrip or driving on White Lane or Gosford presented a threat to you? They weren't near you - didn't even approach you! Did you meet them face to face? Go about your business and take care of yourself. Those folks out and about are grown-ups and don't need "the authorities" to instruct them or for you to scold them. Despite the events and actions taken by both the governor and city officials, this is still America, not Red China.