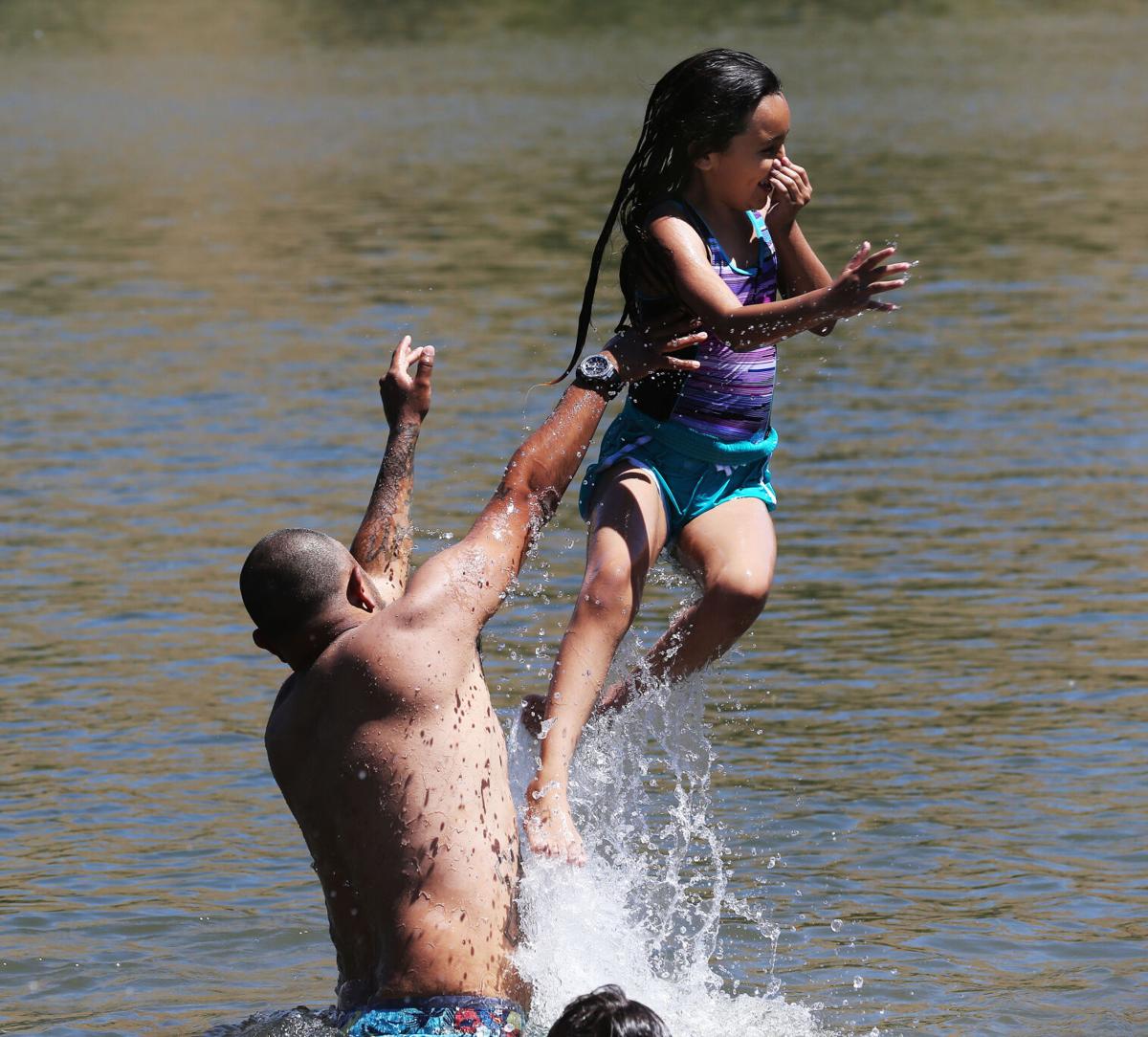 Rafael Rodriguez launches his daughter Mira Rodriguez into the air to later plunge into Hart Park Lake on Monday afternoon. 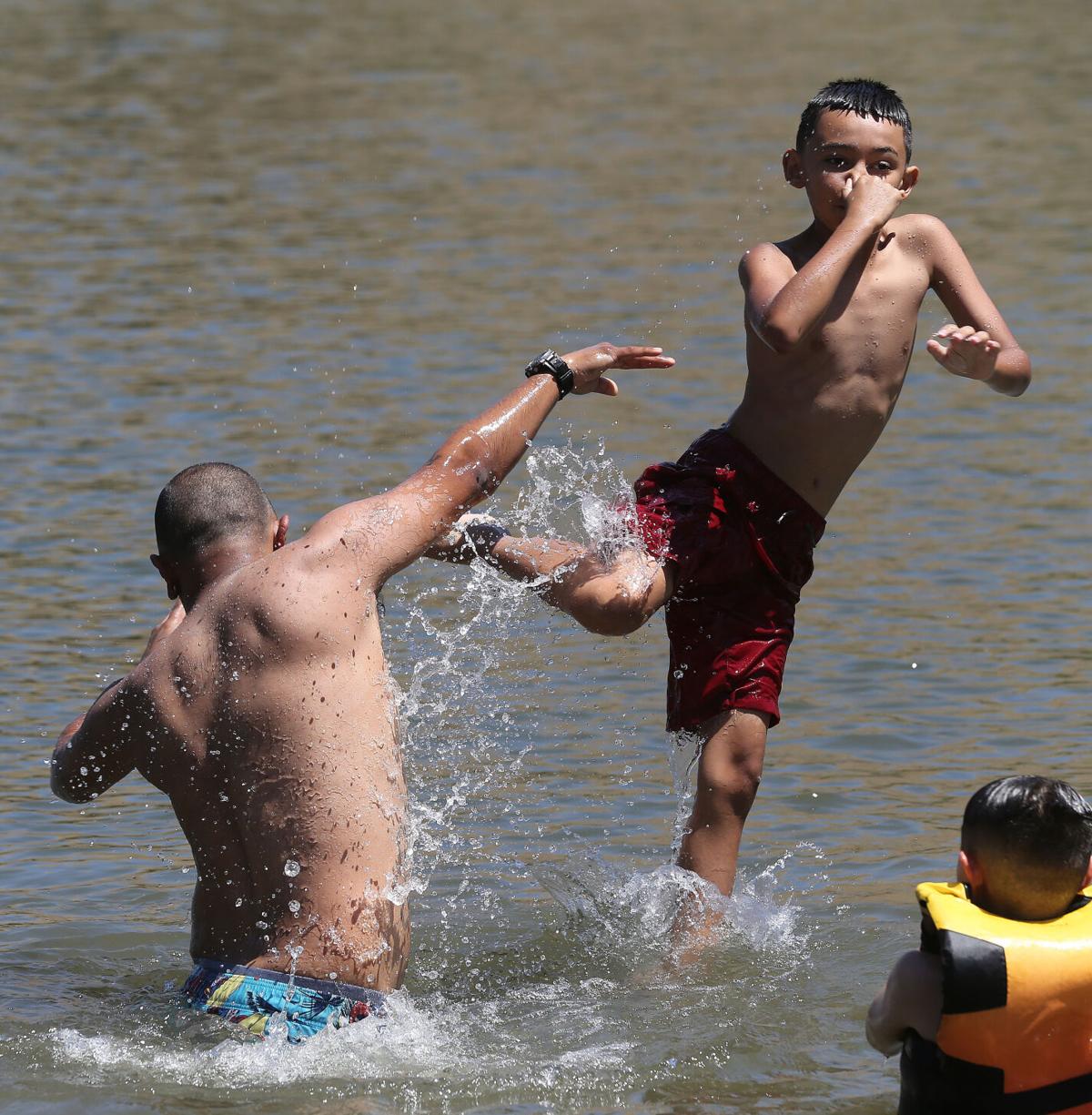 Rafael Rodriguez launches his son Roman Rodriguez into the air to later plunge into Hart Park Lake on Monday afternoon.

Rafael Rodriguez launches his daughter Mira Rodriguez into the air to later plunge into Hart Park Lake on Monday afternoon.

Rafael Rodriguez launches his son Roman Rodriguez into the air to later plunge into Hart Park Lake on Monday afternoon.

Expectations for the second heat wave of the year are raising calls for Kern residents to take precautions and stay vigilant — not just for themselves but also senior citizens, children, co-workers and people living on the streets — as the county approaches the likelihood of record-breaking temperatures by Friday.

A high-pressure weather system expanding westward into California is forecast to push the mercury to 101 degrees on Wednesday, followed by 108 Thursday. Then, according to the National Weather Service, Friday will reach 110 degrees, beating 1961's record by one degree, and Saturday's 109 degrees will top 1945's record by three degrees.

"It will be the hottest it's ever been for these coming days," meteorologist David Spector said at the agency's Hanford office. He added that Sunday and Monday will be cooler but still exceed 100 degrees before highs dip back into the 90s in the middle part of next week.

In preparation, local authorities have readied public cooling centers, and Pacific Gas and Electric Co. has advised its customers get ready for the possibility of heat-related power outages. Medical professionals, meanwhile, are telling people to take steps ahead of time to prevent heat illness.

Dr. Jonathan Dario recommended staying hydrated with eight or more glasses of water per day and considering the use of electrolyte replacements such as Gatorade. He also suggested limiting sun exposure, monitoring weather reports and wearing loose-fitting clothing that breathes.

"From the perspective of a physician, the best way to stay safe is really just to prepare yourself beforehand," he said.

But beyond the common advice of taking plenty of breaks, making good use of shade and avoiding alcohol and caffeine, which tend to dehydrate, Dario urged residents to keep an eye on children and the elderly.

He said anyone noticing a person suffering from muscle cramps, faintness or dizziness should advise getting out of the sun and drinking water — then call 9-1-1 if these symptoms persist for more than 15 minutes. Bad headaches, worsening nausea and stubborn fevers call for an immediate trip to an emergency room, he said.

The county brought 14 cooling centers online June 1 and plans to open them between 1 and 8 p.m. if temperatures in the valley reach 105 degrees or the desert areas hit 108. The threshold in the Frazier Park area is 95 degrees. Not until Sept. 22 does the county expect to close the centers for the year.

The Mission at Kern County said it will open its cooling center at 821 E. 21st St. when the National Weather Service forecasts local temperatures will exceed 100 degrees. In such cases it will open its day center to the public from 9 a.m. to 8 p.m.

The county department of Aging & Adult Services said it has coordinated with local transit agencies to provide free travel to and from local cooling centers. Local seniors can make arrangements by calling 2-1-1. The agency also is offering free fans to eligible seniors who call 661-868-1000.

People without a home to live in are at higher risk for experiencing heat-related illness and therefore require special vigilance, said Anna Laven, executive director of the Bakersfield Kern Regional Homeless Collaborative.

"Showing kindness to our unhoused neighbors by keeping cold water bottles for handout is one way residents can support those experiencing homelessness during extreme heat," she said by email Monday. "Donations to local street outreach organizations like Flood Ministries is another. As well, if someone is observed and believed to be unconscious or experiencing a medical emergency, we ask that they call 9-1-1."

With regard to people working outdoors in the heat, the state Department of Industrial Relations requires employers to train all their workers and supervisors about heat illness prevention.

It calls on them to provide enough water so each employee can drink at least one quart per hour while also providing shade and encouraging workers to take a cool-down rest in shade for at least five minutes rather than wait until they feel ill.

The State Compensation Insurance Fund, which insures California employers, noted that people normally used to hot weather can quickly be caught off guard and go into heat exhaustion or even heat stroke.

"You should never wait until you are thirsty to drink, especially during high heat advisories," said Lauren Mayfield, the fund's senior vice president of safety and health.

She suggested supervisors reschedule work crews to earlier or later hours, if possible, to avoid times of maximum heat. She also urged greater communication: Supervisors should ask workers if they're OK and when was the last time they drank water.

"If you start seeing people who are lethargic or confused or no longer sweating, you are in serious trouble out there," Mayfield said. She added that it can take a person up to two weeks to acclimatize to high heat, and that people working in sweltering conditions should wear light, loose-fitting clothing that covers the whole body and to wear a wide-brim hat.

PG&E said customers should stay prepared for potential power outages by keeping easy access to flashlights, radios and fresh batteries. Also, when it's cooler outside than inside, open windows to allow in cool air.

The utility further suggested keeping shades closed during the day and leaving fans on to circulate air. The area around an air-conditioning unit should be kept clear and the machine's filter should be replaced if necessary, it said, and thermostats should be set at 78 degrees or higher, providing health conditions allow it.

PG&E also offered tips like unplugging idle electronics and keeping water-filled plastic jugs in the freezer to help prevent food from spoiling when the power goes off.