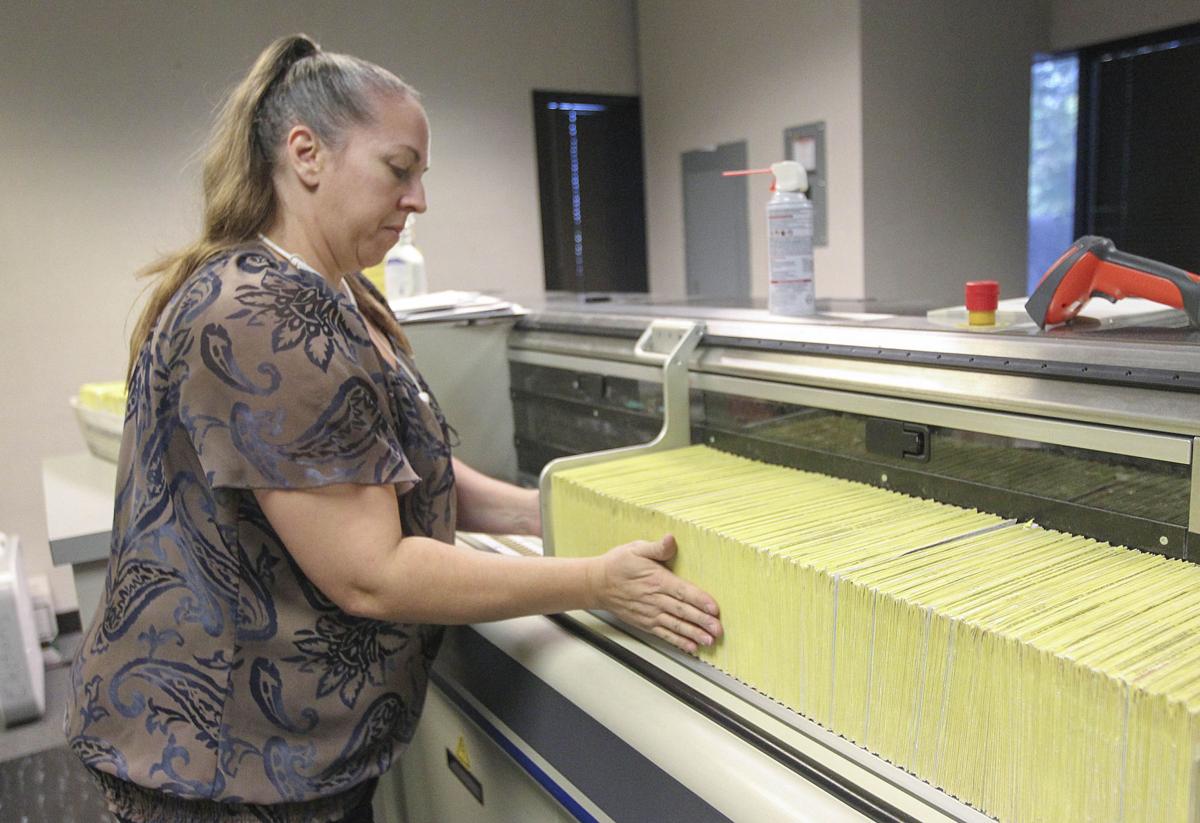 Elections processing clerk Marcie Welch feeds ballots into a machine that will sort the ballots, one of the steps that lead to the official count. 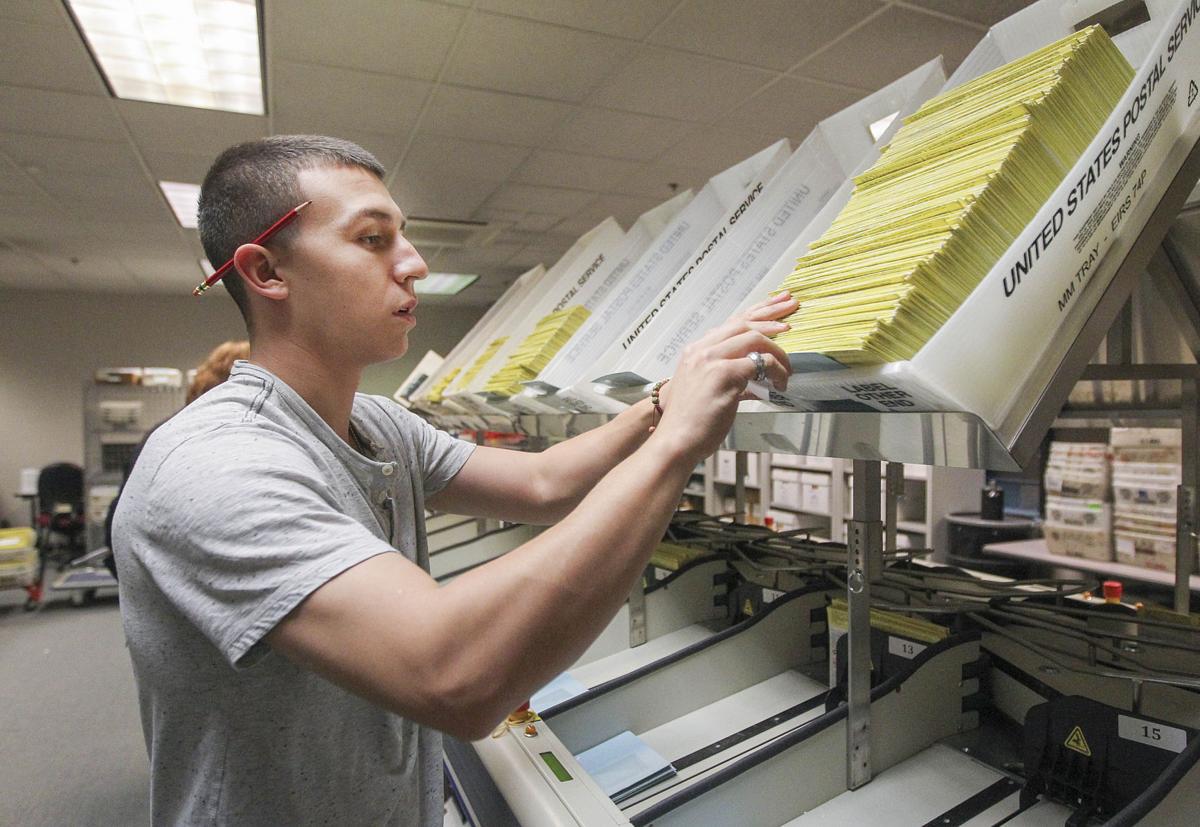 Noah Hinzo, a temporary worker in the Kern County Elections Division, stacks ballots that have been sorted in preparation for counting. It is one of several steps taken to ensure ballots are counted. 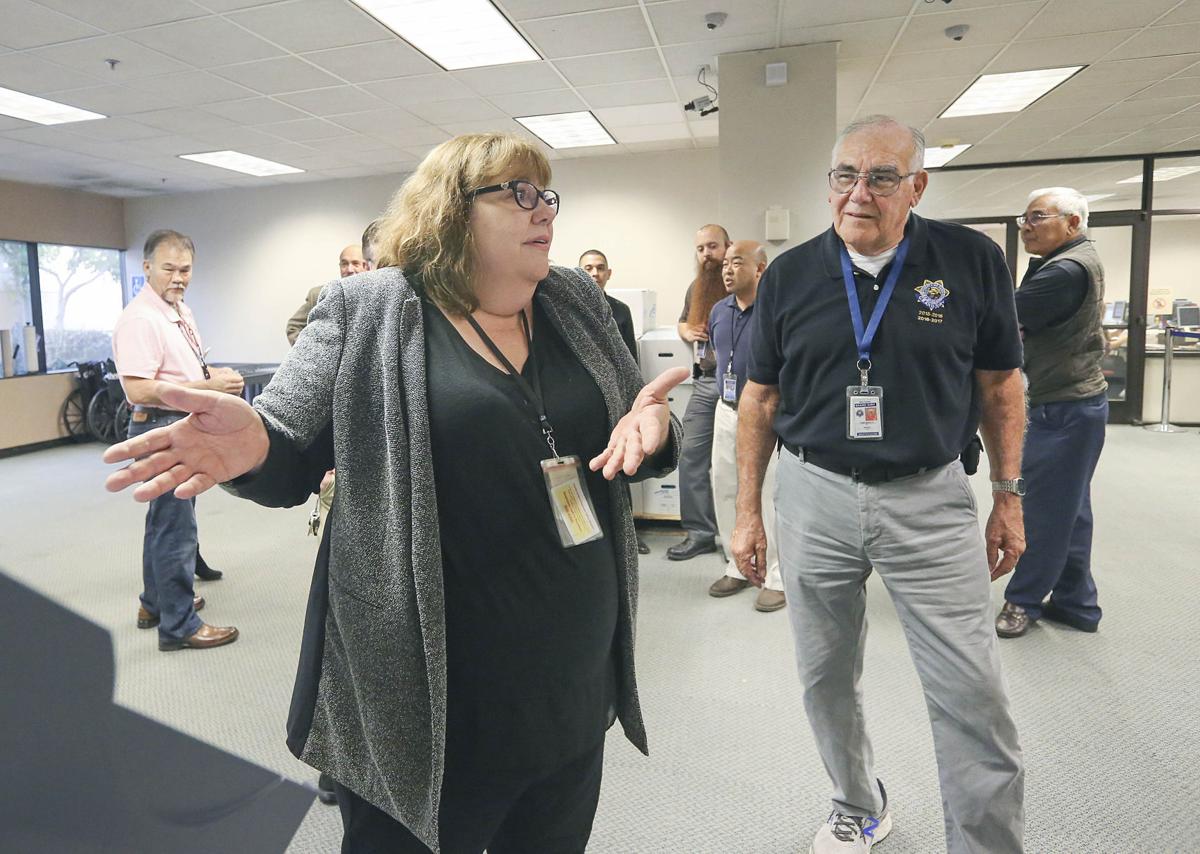 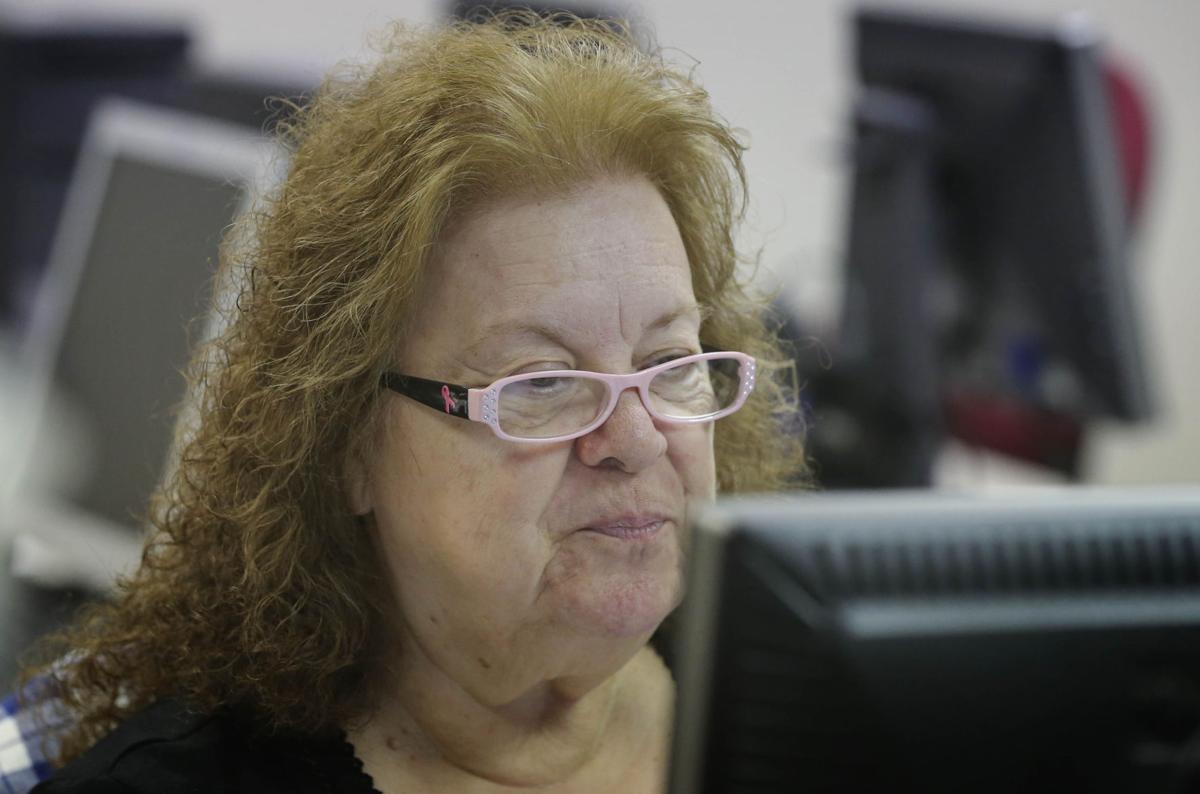 Temporary election worker Sylvia Chavez compares signatures on ballots. It is one of the steps taken to make the ballots are valid and can be counted. 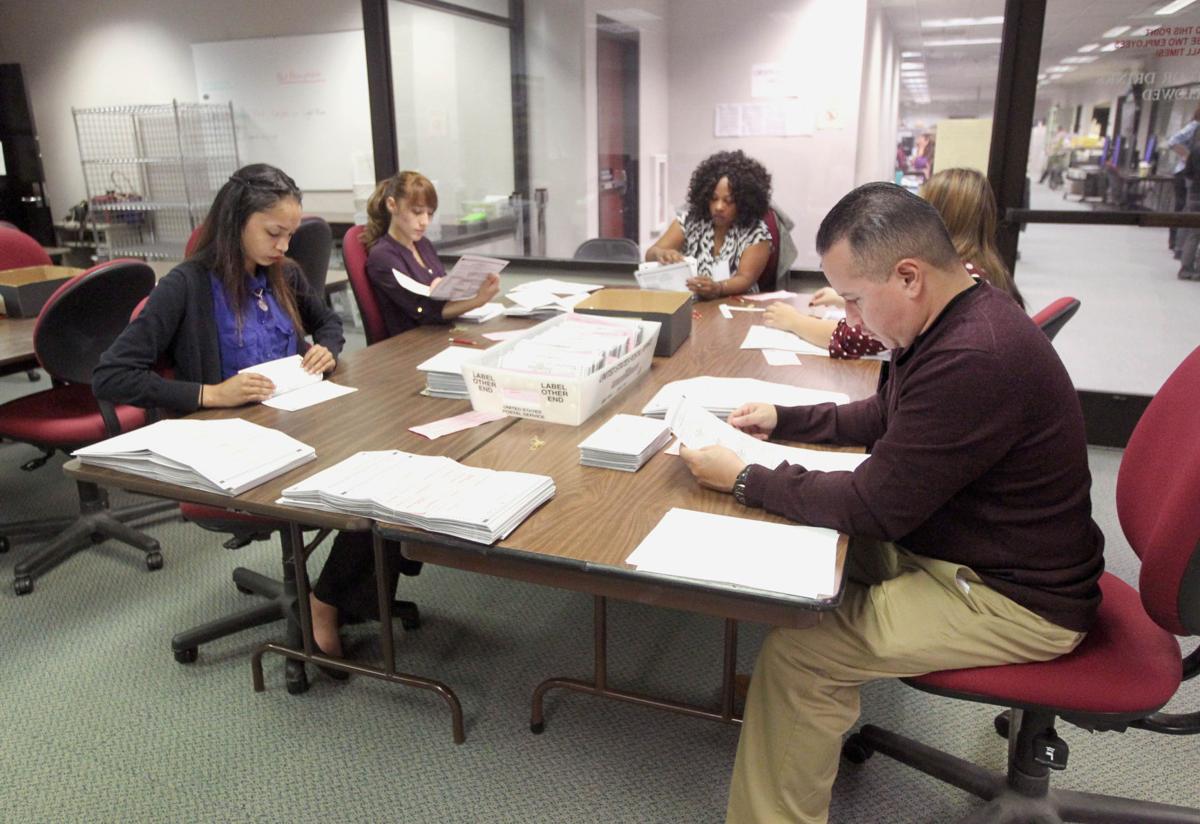 Election workers unfold and check ballots at the Kern County Elections Division, one of the first steps before ballots are officially counted.

Elections processing clerk Marcie Welch feeds ballots into a machine that will sort the ballots, one of the steps that lead to the official count.

Noah Hinzo, a temporary worker in the Kern County Elections Division, stacks ballots that have been sorted in preparation for counting. It is one of several steps taken to ensure ballots are counted.

Temporary election worker Sylvia Chavez compares signatures on ballots. It is one of the steps taken to make the ballots are valid and can be counted.

Election workers unfold and check ballots at the Kern County Elections Division, one of the first steps before ballots are officially counted.

Most of Kern County’s voters, if past elections are any indication, will mail in their ballots this election season.

Those ballots, mailed out on Oct. 11, are flooding into the Kern County Elections Division right now.

What happens to them? That’s our story.

On Wednesday morning, 22 trays of mail ballots — 8,455 sets of voter choices wrapped snug in their yellow, green or purple envelopes — came through the elections office doors.

Like their earlier brethren, the forms were sorted, photographed, squeezed and re-sorted. Then each valid envelope was slit open and the ballot removed, unfolded and bundled.

It’s a wild ride over vibrating boards, through high-speed machines and under digital imagers until each ballot has been joined with others from the same precinct and secured for early next week when the counting starts.

Through it all, each ballot is carefully tracked, said Kern County Elections Chief Karen Rhea.

Things got rolling when the mail arrived.

The first job was to get the other mail out of the piles. Elections workers did that by hand.

Once the ballots were alone in their trays, they were moved to the sorting room where a massive Pitney Bowes Relia-Vote machine stood.

Workers used a vibrating table to stack the ballots tight, thumping a brick of ballots down, turning them, thumping them again and packing them back in their trays.

Welch hefted great blocks of ballots out of their trays and dropped them into the hopper of the Relia-Vote, swinging a retaining arm down to hold them in place while she got more.

When the hopper had a good pile stacked horizontally, Welch moved down the line, smacking the ballots into tighter formation.

Then she grabbed the mouse on the machine’s computer interface and clicked the Relia-Vote into life.

With a whir, the ballots were pulled into the machine one-by-one in a blinding rush — thousands every minute — and shot down a chute to individual built-in holding bins where they joined other ballots from nearby parts of Kern County.

In the moments it took for each ballot to make the trip, it was photographed, the voter’s signature and ballot serial number were captured and the document was checked to see if there were any problems that might require a closer look at it.

As the ballots began stacking up in slots, Noah Hinzo moved them to new trays, slotting a card into the front of each tray that identified where the ballots were from.

In a surprisingly short time, the 22 trays of unsorted mail were put through their first sort.

There would be more.

The ballots — still inside their privacy-protecting envelopes — would be sorted several times until those from each individual voting precinct were grouped into their own tray.

But first, elections officials had to perform a critical check designed to protect voters’ choices from being tampered with.

Across the room, under the surveillance cameras that document everything done in the Elections Division, computers loaded up all the images captured by the Relia-Vote.

The computers matched those images and each ballot’s unique serial number to the voter registration file of the voter that mail ballot was assigned to.

Then elections workers began flipping through a computer interface that displayed the ballot’s signature on the screen with the signature the voter used to sign his or her voter registration form.

Elections workers are trained to look for differences in signatures and — if they see them — tag the ballot electronically.

The next time a tagged ballot would go through the sorting machine, it would be kicked out and held back until six elections workers — finishing with Rhea herself — had looked at the signatures.

Ballots without matching signatures are never opened nor counted.

Ballots that clear the signature check are approved for the final sorting runs and opening.

There’s a machine for opening, too.

Other elections workers grabbed the ballots, one by one, and slotted them into a machine that slit open the envelope and sucked the paper away from the ballot inside.

The worker grabbed the ballot and pulled it free, stacking it with the others.

Empty envelopes were piled in another stack. Once the envelope is open, Rhea said, it must be separated from the ballot so the voter’s choices remain secret.

But the envelopes must be kept and tracked so that the Elections Division can go back and check if a problem — like a ballot being in the wrong precinct — turns up.

From the opening table the ballots were taken to another table where more workers unfolded them and checked to make sure they were not damaged, were free of identifying marks and had clear marks.

The choices on any damaged ballot must be duplicated on a new form, while four people and the video cameras watch.

Then the ballots were bundled into batches — ready for the counting to start early next week.

In less than two weeks the voting will be over.

But Rhea and her team will work for weeks beyond that, counting late mail and provisional ballots and — most importantly — completing the process of reconciling the election.

“Reconciliation verifies that every (valid) ballot made it through the process and got counted,” Rhea said.

Elections workers will compare the records of all the ballots sorted through the system to voter registration records and the actual ballot tally.

All the numbers have to match up, Rhea said, or elections workers will go back through the trays of ballots to find out what went wrong.

That’s how Rhea makes sure every voter gets to vote and has his or her vote counted.

Watch for yourself how Kern County ballots are gathered, sorted and readied for counting at Bakersfield.com.

Election season is officially underway as ballots go out

Announcing the winner of those presidential bobbleheads

The Californian recommends: A guide to California's crowded initiative ballot

How well do you know Hillary Clinton?

How much do you know about the Presidential Election?

How well do you know Donald Trump?