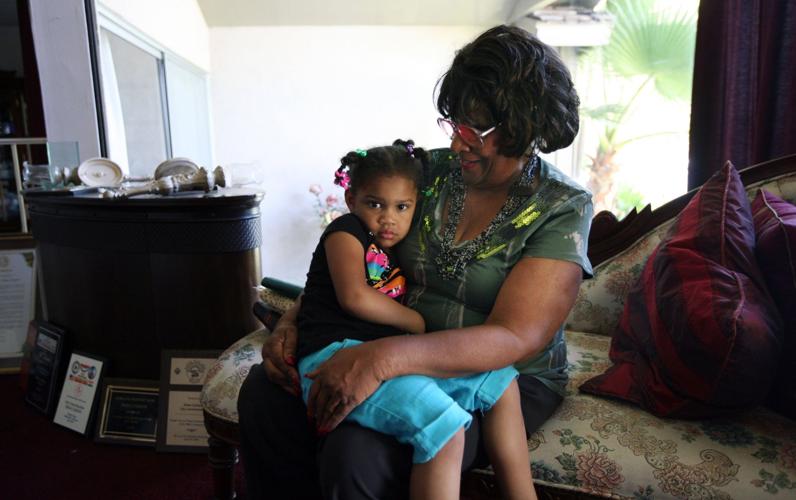 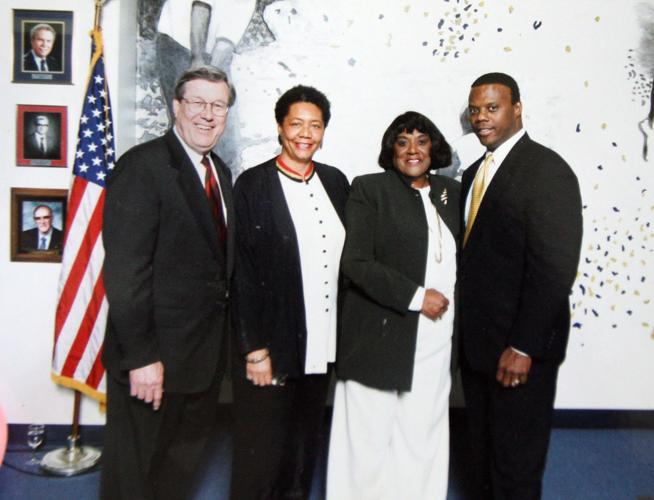 Irma Carson poses with, from left, then-Congressman Bill Thomas, Wanda Bradford and then-Oklahoma Congressman J.C. Watts at a fundraiser for Thomas in the early 1990s. 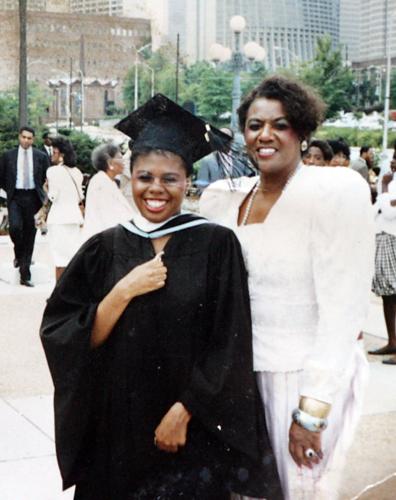 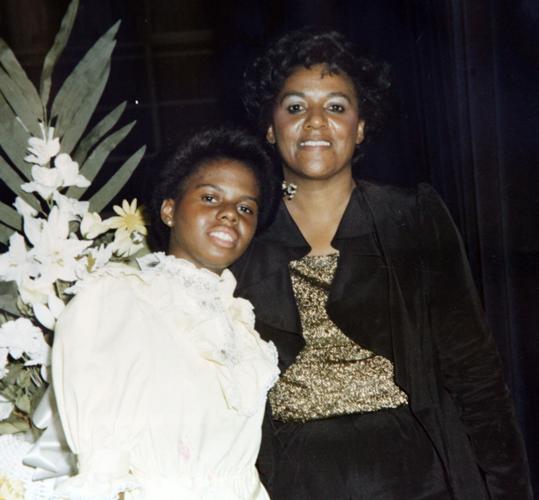 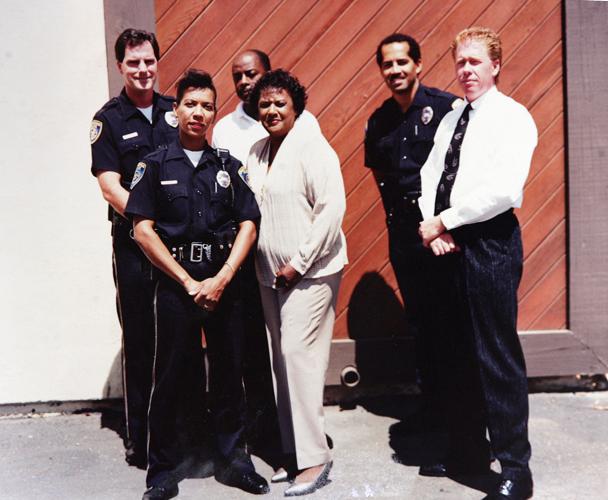 Irma Carson is flanked by Bakersfield police officers shortly before leaving the force in 1989. 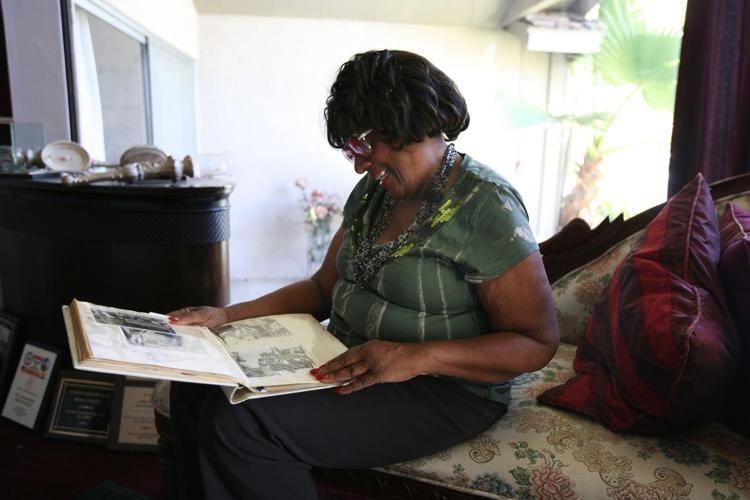 Irma Carson looks through some old photo albums from years past.

Irma Carson poses with, from left, then-Congressman Bill Thomas, Wanda Bradford and then-Oklahoma Congressman J.C. Watts at a fundraiser for Thomas in the early 1990s.

Irma Carson is flanked by Bakersfield police officers shortly before leaving the force in 1989.

Irma Carson looks through some old photo albums from years past.

On Dec. 15, Irma Carson will officially step down from the Bakersfield City Council, ending a 16-year run and a local career with many firsts.

"It's been a great journey," she said.

Carson can point to many accomplishments during her time representing Ward 1, which includes much of southeast and central Bakersfield.

"Grocery stores have come back to the community," she said.

In 2003, the Food Maxx on California and Union avenues opened, followed later that year by the Albertsons on Chester Avenue. Carson had fought since 1995 to get a supermarket in the area after the Alpha Beta on Brundage Lane closed.

But Carson might be most proud of having helped create the Southeast Redevelopment Area in 1999, a years-long process. (The council established the Old Town Kern redevelopment area, which extends northward, at the same time; an older downtown area has been in place since 1972.)

Some redevelopment efforts have recently blossomed. The popular Mill Creek Linear Park was finished earlier this year. It snakes along a downtown canal toward the Maya Cinemas on California Avenue, which opened in 2009 in the southeast redevelopment area.

Earlier this month, Carson attended her final groundbreaking as a city official when ceremonial shovels turned dirt for the 70-unit affordable Cityplace apartment complex. The units are part of a cluster of redevelopment projects going up just east of Maya Cinemas.

"Oh, what a day," Carson told attendees, saying the projects would help put a new face on southeast Bakersfield. "It was a long, hard fight, but we made it."

One of her main disappointments as a councilmember was her failed 2005 bid to shutter the Bakersfield Municipal Airport on South Union Avenue. She thought the site could have been turned into "beautiful housing and commercial" uses, but the Federal Aviation Administration in 2006 sternly quashed the idea.

And then there's the gang problem, which she believes is Ward 1's biggest challenge.

"I feel that I have completed most of what I pledged to accomplish for the ward, although there's much yet to be done," Carson said.

Carson was born in Monroe, La. in 1935. When she was 2, the family moved to St. Louis, where she stayed through high school.

As the middle child in a family of 12, Carson remembers the two-story, three-bedroom house in St. Louis being packed wall-to-wall with beds and the family using an outdoor toilet.

Some of Carson's childhood memories, including her first experience with racial prejudice in a segregated city, are so ingrained her descriptions matched almost word-for-word quotes in a 1999 interview with The Californian.

When she was 8, she got her first job washing the windows of a candy store.

"I had to wait outside. The husband was racist and didn't like blacks," she said, so she had to wait until he left. "I remember that to this day."

She attended all-black Sumner High School, where she was involved in many activities but loved books above all.

"I was a reader. I lived at the library," Carson said. "I lived my life in books."

She graduated from high school in 1953, and much of her family moved to Bakersfield that year. After working various jobs, she landed a position with the city of Bakersfield finance office in 1959.

Margaret Ursin, who became a lifelong friend of Carson's, started working in the same office just three days before.

"She was a very dedicated, hard worker," Ursin said, noting Carson went back to college to get her degree while holding down a full-time job and raising a family.

"I couldn't have done all of that myself," Ursin said.

Carson raised three daughters with her late ex-husband -- Sharon, Camille and Karen -- though Sharon, the oldest, died suddenly in 2008 at the age of 50 from a heart attack and loss of brain function. Carson is now a grandmother and great-grandmother.

In 1969, when Carson was getting ready to go back to school, the police chief asked if she wanted to become a police officer.

She passed the test and became the department's first black female officer, eventually becoming a homicide detective and moving up to the rank of sergeant.

Carson wasn't promoted to lieutenant, and In 1988 she filed a sex and race discrimination lawsuit against the city. She settled the suit and retired in 1989 on a lieutenant's pension that as of June was about $47,000 a year, according to records provided by the California Public Employees' Retirement System.

"I had to fight," she previously told The Californian. "Not everybody's going to agree with you. I stand on the shoulders of so many people who were great fighters and activists."

Bob Price, Bakersfield's former mayor and police chief, worked with Carson both in the police department and on the council.

"Irma Carson was a hard worker and a pleasant person," Price said, adding she was "strong in her opinions." He said she was good to work with on the council and represented her ward very well.

In 1979, Carson was first elected to the Bakersfield City School District board, where she served 15 years before her election to the city council in 1994.

Carson said she loved being on the school board but was asked by many people to run for the council.

While Carson was the first black woman on the city council, the Ward 1 seat had been held by seven black men before her, starting in 1953. She can name all of them in order.

"I think Irma did the best job she could do under the circumstances," Strong said, noting Ward 1's challenges make it especially difficult to govern.

Mark Salvaggio, a former councilmember who held the Ward 7 seat for 19 years before retiring in 2004, served with Carson for about a decade.

"She was a fighter for her ward," Salvaggio said.

While he praised her efforts bringing in grocery stores and keeping the Bakersfield Senior Center on 4th Street afloat, Salvaggio said Carson was sometimes so focused on Ward 1 she had tunnel vision.

"I'm hoping Rudy Salas has a broader perspective," he said of the 33-year-old who will succeed Carson next month.

Carson, who lives in a neighborhood off California Avenue west of Highway 99, said she's considering moving into one of Bakersfield's senior communities. She'll still be involved in the community, she said -- she's still director of the nonprofit Ebony Counseling Center, a position she's held since 1990 -- but just not in a leadership role.

"I think I've had a blessed life," she said. "I've had family, friends and the opportunity to serve. And as Dr. King said, service is the greatest reward there is."