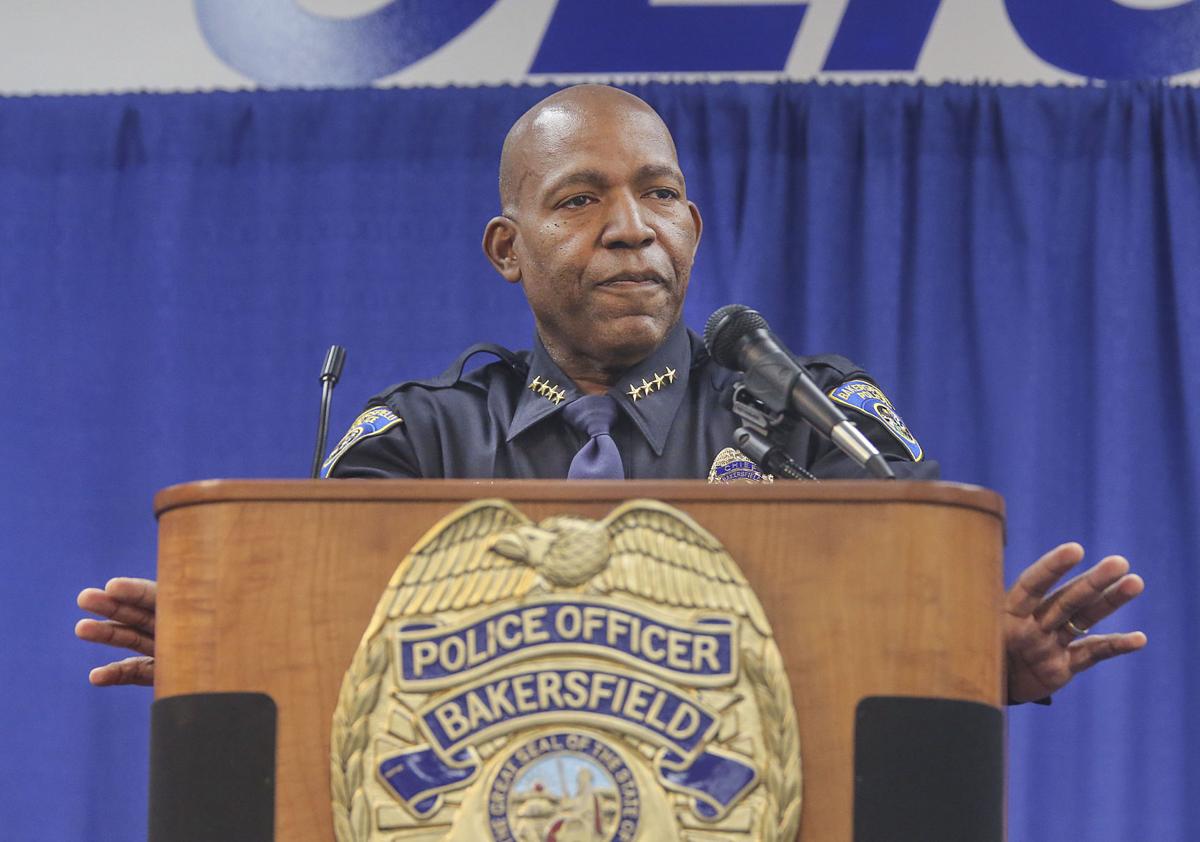 Bakersfield Police Chief Lyle Martin holds a press conference after it was found the shooting of unarmed 73-year-old Francisco Serna was within BPD guidelines. 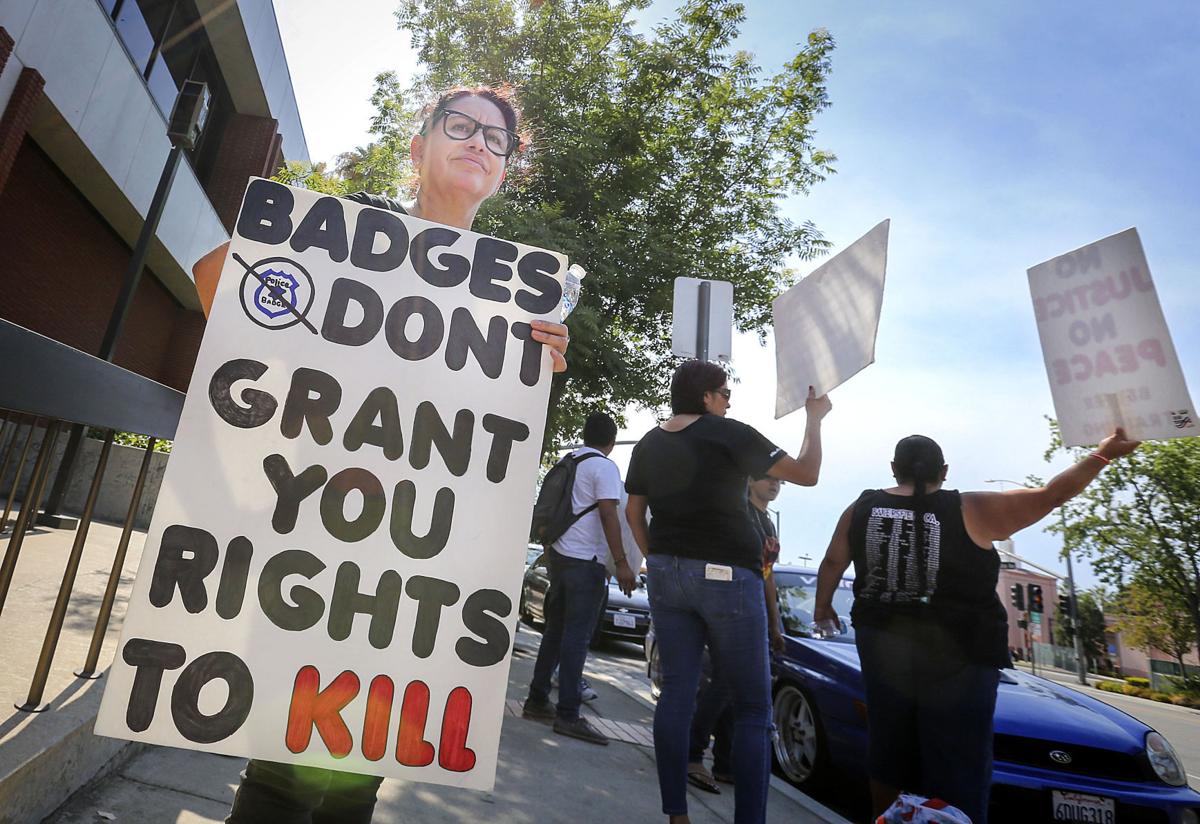 Laura Serna, daughter of 73-year-old Francisco Serna, protests in front of the Bakersfield Police Department in July after it was found that the shooting of her father by a BPD officer was found within BPD guidelines.

Bakersfield Police Chief Lyle Martin holds a press conference after it was found the shooting of unarmed 73-year-old Francisco Serna was within BPD guidelines.

Laura Serna, daughter of 73-year-old Francisco Serna, protests in front of the Bakersfield Police Department in July after it was found that the shooting of her father by a BPD officer was found within BPD guidelines.

The December shooting by police of an unarmed 73-year-old man, which sparked outrage and calls for a federal investigation, has been ruled within Bakersfield Police Department policy and state and federal guidelines, police said Thursday.

Police Chief Lyle Martin called the death of Francisco Serna "unfortunate" and "tragic," and said his thoughts and prayers go out to the Serna family and the community.

But he said he found the actions of the officer who fired justifiable under the law given, among other things, that police were twice told by witnesses — once on their way to the scene, and once upon arriving — that Serna was armed with a revolver.

The police review board's findings will be reviewed by the District Attorney's office as well as at the state and federal level, Martin said.

"I want to tell everyone to be careful," she said. "Some of the police are not your friend here."

She said the family is in the process of taking legal action through its Fresno-based attorney, Lazaro Salazar. He could not immediately be reached for comment Thursday.

The events leading to Serna's shooting unfolded rapidly on the early morning of Dec. 12.

Serna approached police less than a minute after officers arrived to a report of a man armed with a gun who walked up to a woman as she was dropped off at her house in the 7900 block of Silver Birch Avenue.

While speaking with police, the woman pointed Serna out as the armed man as he walked toward officers with his hands in his jacket.

Officer Reagan Selman repeatedly told Serna to stop, but he kept walking toward the officer, the chief said. Selman backed up and repeated commands. Serna remained silent as he continued moving forward.

Finally, the officer was backed into a position where further retreat was blocked by a fence, Martin said. The officer warned Serna he would shoot. Serna still made no response other than to advance, hands still in his jacket.

A search of Serna afterward didn't turn up a weapon, just a faux wood crucifix.

Family have said Serna suffered from early onset dementia and was out for a walk when the shooting happened.

Weeks after the shooting, then-California Attorney General Kamala Harris announced she had launched civil rights investigations into the BPD and Kern County Sheriff's Office for "a pattern and practice of excessive force" and related issues. The investigation is civil, not criminal.

Officials with both agencies said they would fully cooperate. Martin said Thursday he could not comment further on the investigation, and questions regarding it must go through the Attorney General's office.

He noted, however, that shortly after the incident he invited the FBI to review evidence in the shooting. He said as chief he will continue to be as transparent and open as legally possible regarding the actions of the department.

Preparations are being made to return Selman to active duty.

what happened to "legal right to an attorney" ??????????
that goes for all the innocent african american kids, women and men who have been murdered by cops, and this abuse of power has been covered up....for centuries...its just that the world can see it virally now....

usa cops and courts are so unprofessional and insincere
the media & court is telling lies, and the people believe them?
its so pointless, so ridiculous and so universally embarassing!
since when are cops and courts above the law???
whatever happened to this man's "right to a legal attorney" ???
that plus thousands of unarmed african american men, women and children
have suffered the same fate silently.
they kill an unarmed man and then create a report that claims otherwise
nobody in usa cares anymore, they know its blatant abuse of power
they know the corrupted courts will lie
and you know what....you missed the point, the beautiful flowers,
the great planet, fun times, good books, planting trees...all not happening in usa
the only thing happening is guns, killing, militia abusing their power like
they did to native americans and african americans before.
the whole world knows this already, usa citizens and courts are the only ones
who dont realise.....they are the worst country in the world!

justice in usa is a joke. it doesnt exist.
leave north korea and all other countries alone.
you've destroyed enough, we dont need your meddling in other countries!

So, if you were the cop, how would you have handled this? Would you have ran away, jumped in your cop car and driven off? Would you have said "Nah, I bet he just has a wooden cross, not a gun," and tried to restrain the man non-violently?

I truly believe the man was suffering from dementia and this led to his non-cooperation with the officer. This makes this a horrible and sad incident. But, no police officer has your medical history when they interact with you. Put yourself in his shoes. If you encountered a man, whom you had been told had a gun and he wouldn't stop walking towards you, what would you have done?

This article is biased & deceptive.
In summary, its central point was that the BPD found ITSELF within guidelines of shooting an elderly man with dementia 7 times, making contact with 5 of those shots, but the title & angle of the story lead on some sort of exoneration.
It's not, of course they are going to find THEMSELVES innocent with the uncertainty of a pending legal battle with the Serna family. The BPD has not been found innocent from the investigation launched by Kamala Harris, not from any other Independent inquiry, & not the FBI.
Regardless, I'll leave a voicemail to Sen. Harris at 1-202-224-3553
in support of her investigation & mention this article in regards to the BPD's latest inability to accept responsibility for their atrocious record of criminality, most recently killing an elderly man with dementia holding Jesus Christ's cross.

Shameful and disgusting. The more I read about these kind of headlines (on a regular basis, these days), the more I wonder if and when a new national civil movement occurs, akin to the 60s civil rights, and or worse case scenario, a revolution. If the police culture in this nation doesn't change in the next 20 years, a movement is inevitable and it will be devastating. I hope that isn't the case, but I notice a shift in attitudes these days. Citizens need to call for action on local and national level and persuade elected officials to take back our law enforcement in this country and speak with their votes..