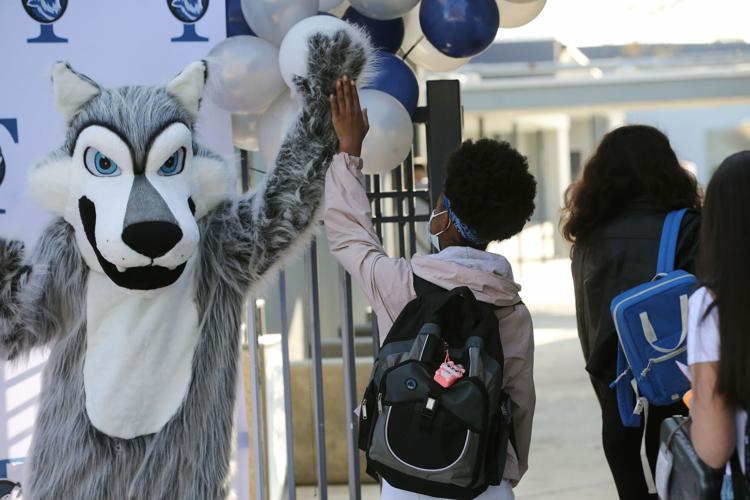 Students at Thompson Junior High greet the school mascot after temperature checks and class schedules were given out Wednesday morning. 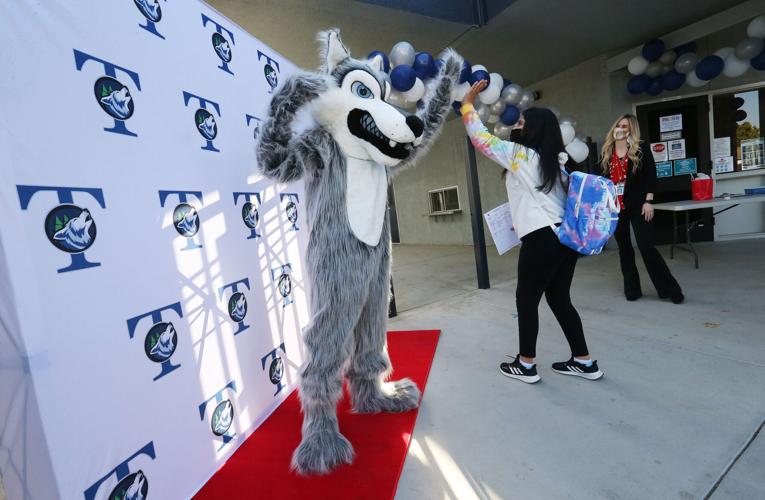 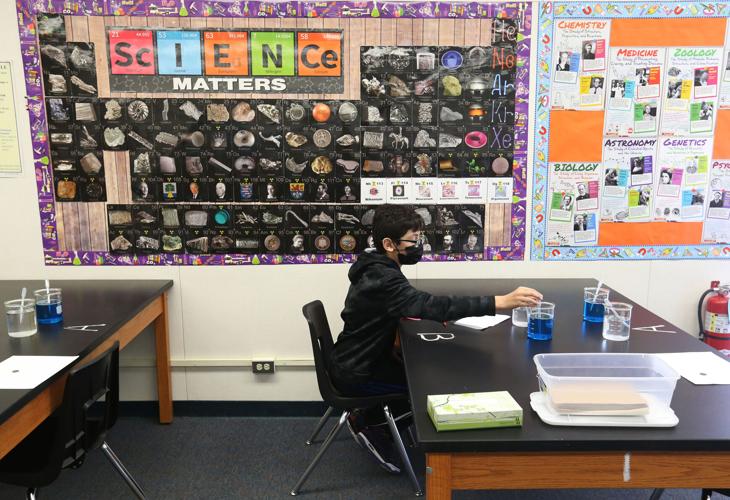 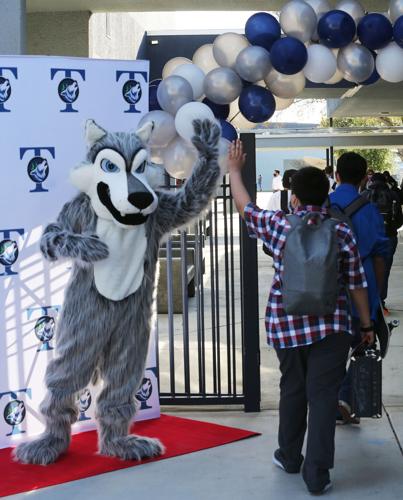 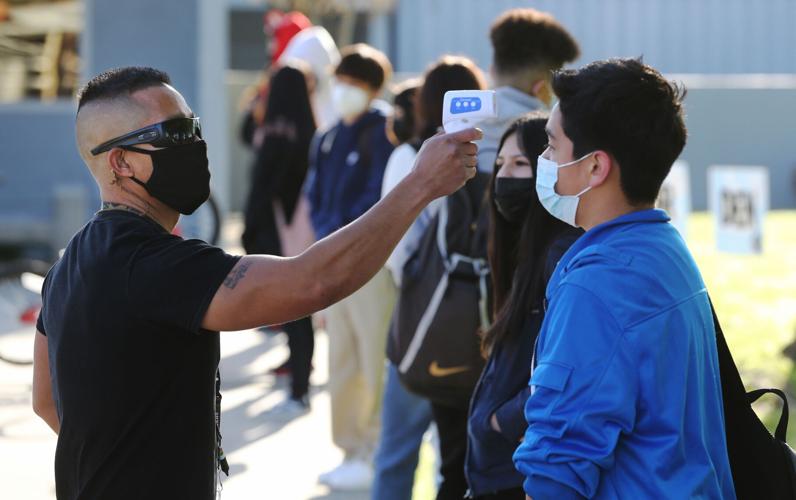 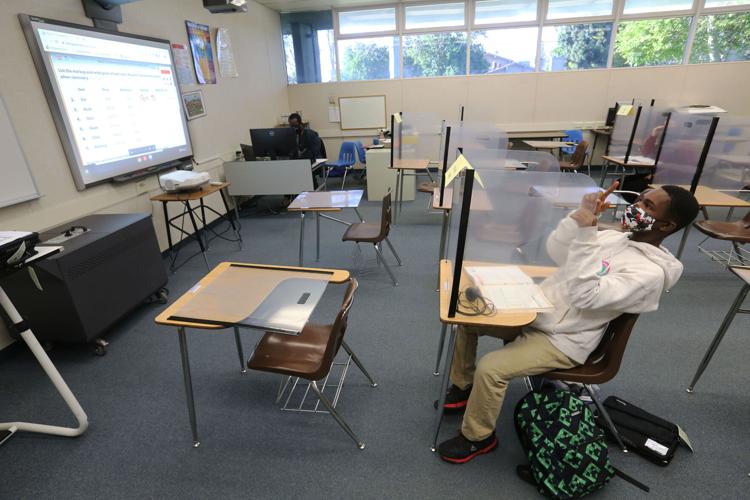 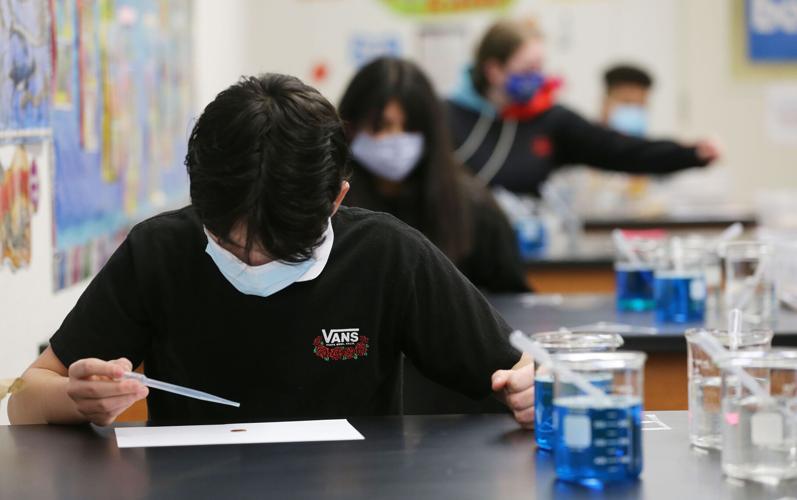 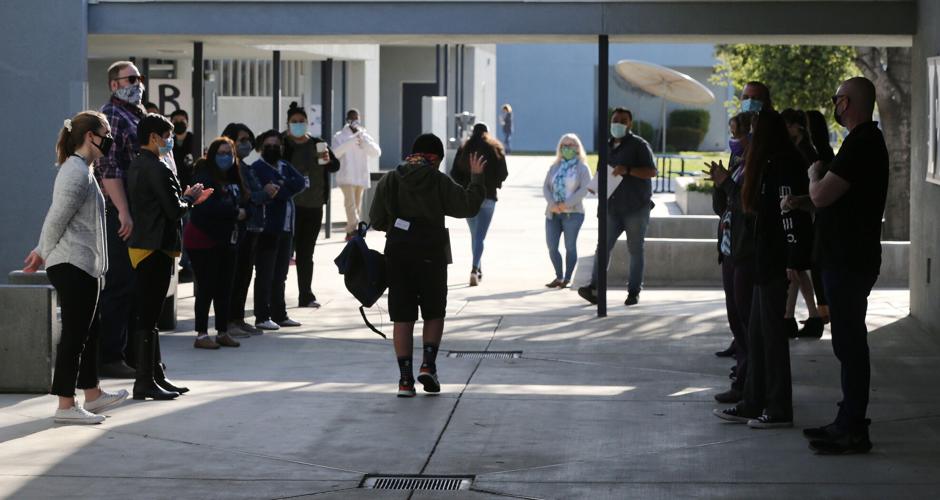 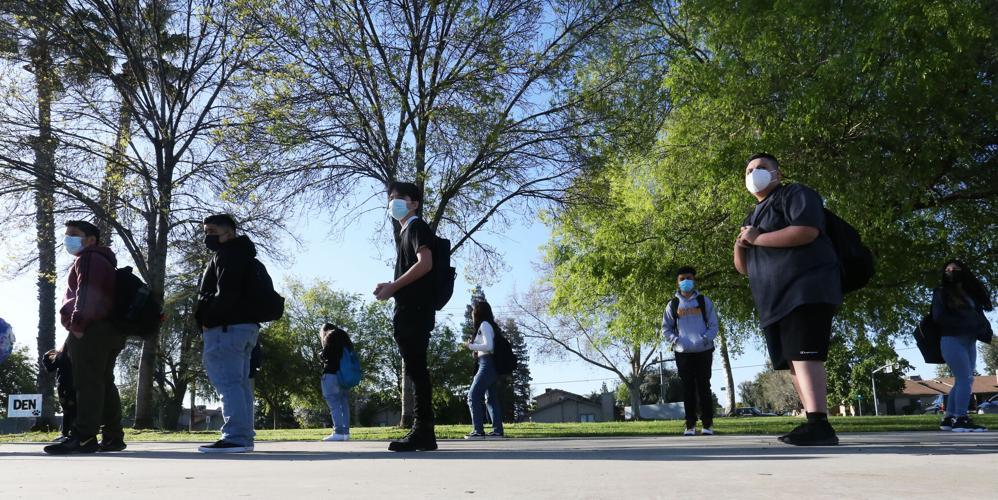 Students at Thompson Junior High greet the school mascot after temperature checks and class schedules were given out Wednesday morning.

The first day of in-person learning for seventh graders at Thompson Junior High was truly an event on Wednesday. There was a step-and-repeat, balloons and the school mascot, a timber wolf, hyping the students up for their very first day on a junior high campus.

Not that some of the students needed any help getting pumped up.

“I woke up way too early, and I haven’t been able to get back to sleep,” confessed Aryes Warren.

Her grandma Beverly Ellis said Aryes was up at 4 a.m., excited to see her friends and her new school. She bolted out of her grandma’s car, eager to receive her school schedule and get started.

Next week is spring break, and afterward on April 6 eighth graders in Panama-Buena Vista Union School District will arrive. That will mark the moment the second largest elementary district in Kern County is open to in-person instruction for all grades. Superintendent Katie Russell said it’s exciting to be one of the biggest districts to reopen.

But this week is dedicated to the seventh graders who haven’t stepped foot on their campuses. Russell said this week will have “much more of an orientation feel.”

“It gets them excited and gets them to know the campus,” Russell said.

Many students at Thompson Junior High were a little shy and unsure of where to go and what to do as they arrived. But staff, who knew many of them by name already, checked their temperatures and guided them to their first in-person classes.

Israel Fuentes said he wasn’t sure what to expect when he went inside the classroom. Would he be the only one there? He said he was a mixture of nervous and excited, but he was ready for something new after spending most of the year in distance learning.

Students weren’t alone in their classrooms but most of them didn’t have many peers present — at least right now. Principal Michael Brasier said that could change. So far, 48 percent of students had opted to return, but with the county announcing it was heading into the red tier starting Wednesday, some parents were having second thoughts, he said. He was starting a waiting list for more students.

The number of junior high students ready to return was about the same across the district, according to Jennifer Irvin, assistant superintendent of educational services. However, some campuses had return rates as high as 60 percent.

But on Wednesday the classes remained relatively small due in part to the A/B model, which has two groups of students coming in two days per week. So if half of a class opted for in-person learning, one quarter would be in the classroom and the other in-person section would be in remote learning along with the distance learning only half.

Teachers were doing their best to make the most of their time with their in-person students, while teaching their students at home, too. Science teacher Wendy Davidson had her students at home studying the concept of water’s surface tension — or the fact it seems to have a “skin” — through a video. Inside the classroom, students were focused as they conducted an experiment. Each student was carefully squeezing droplets of water onto pennies.

This wasn’t a first day of school activity. Russell said staff has learned from younger grades that students come in with all the rules and expectations they’ve learned from the first three-quarters of the year. Mostly, new kids on campus just need to learn where everything is.

“They are not at the first day of school, academically,” Russell said. “They’re coming in right where they left off.”

Every district has had a slightly different plan for dealing with the fact that older students change classes, which makes it tricky to limit the number of people affected by a quarantine in case there is a positive case. PBVUSD’s students do change classes, but they have given schools some leeway in the way they group their students together.

Brasier said that Thompson began making plans in the way it scheduled students at the beginning of the semester with an eye on a return. Students change classes, but they are grouped together in four stable “houses” to limit the number of contacts students have throughout the day.

Jennifer Everett said she felt a mixture of emotions dropping off her son Andrew. She felt excited to have him return, though a little nervous about the prospect he could be exposed to COVID-19. But ultimately she weighed it out and felt like it was the right call.

“He’s been isolated from being in his room all day,” she said.

And this morning, she was surprised to see that she didn’t have to bug him to get ready for school.

“He wanted to get up,” she said, smiling.

With COVID-19 rates dipping into the red tier in Kern County, it opens up the possibility that some junior high, middle and high school studen…