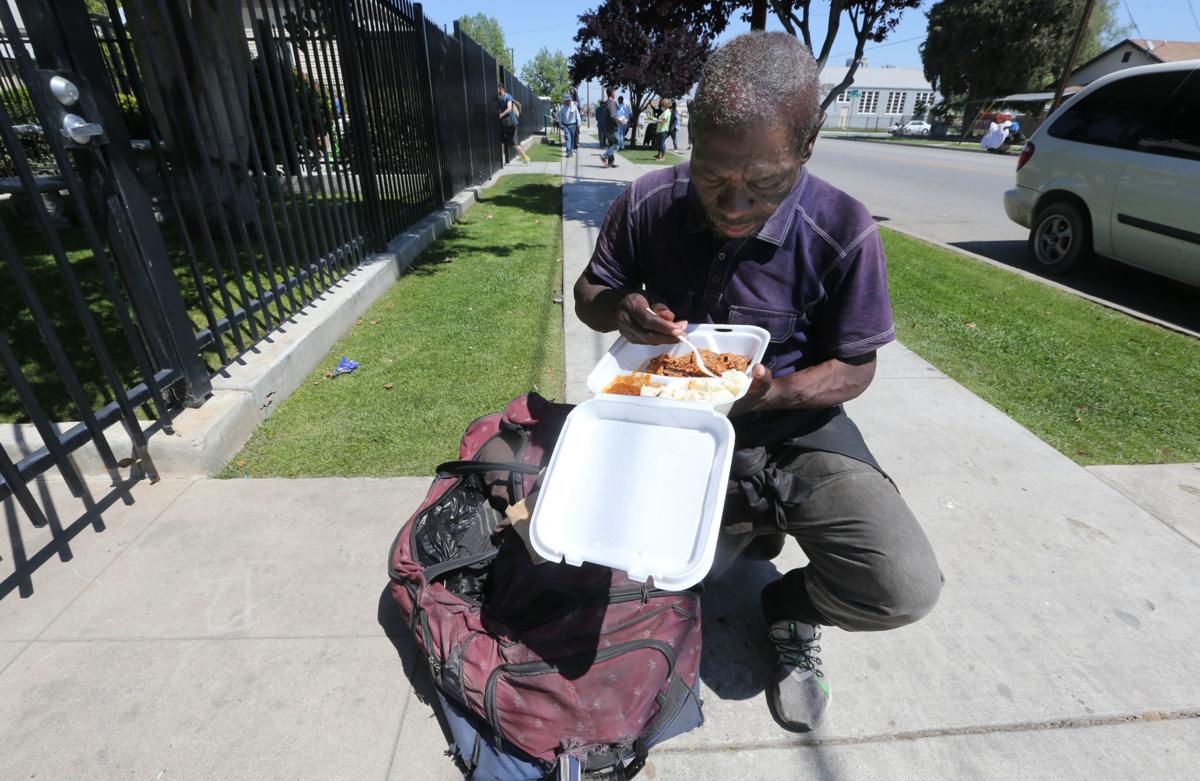 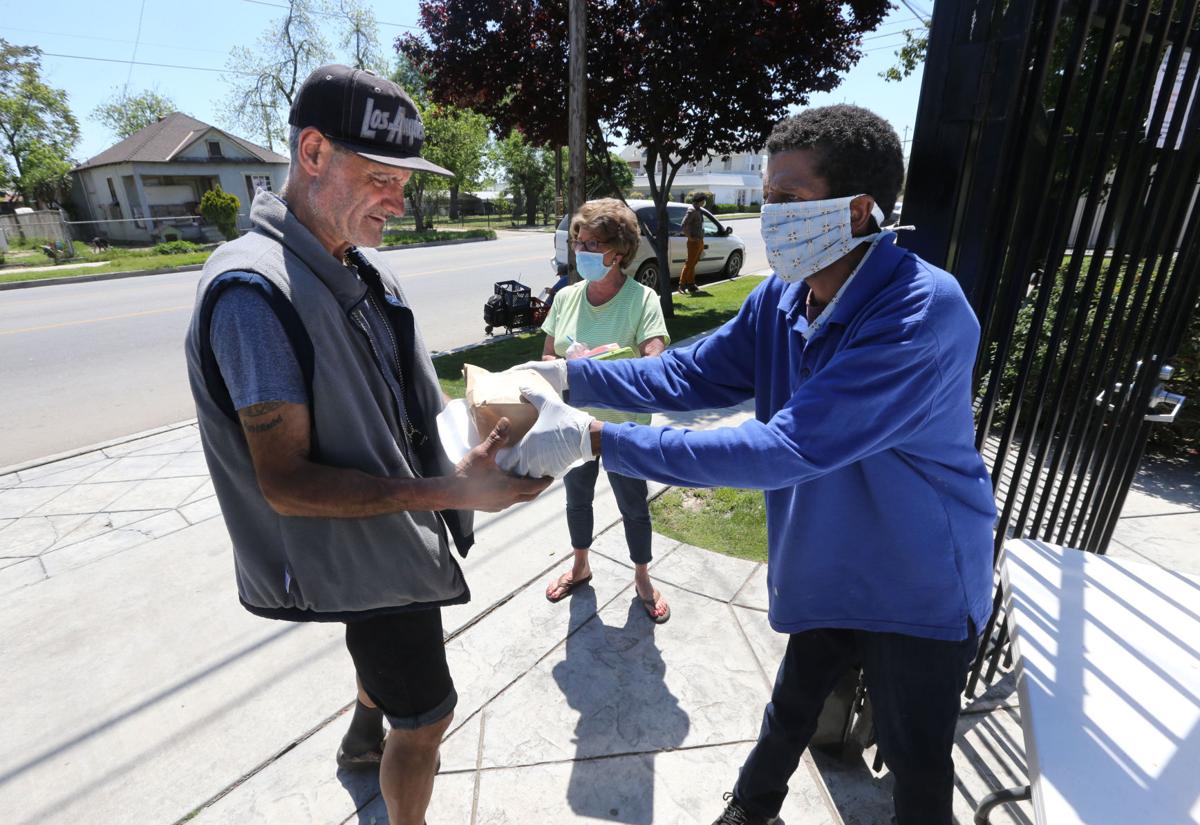 John Hill provides lunch from Sonder restaurant to individuals experiencing street homelessness. The lunch was courtesy of Operation BBQ Relief, a relief effort to provide 35,000 meals to the homeless and those experiencing food insecurity in Kern County during the COVID-19 pandemic. 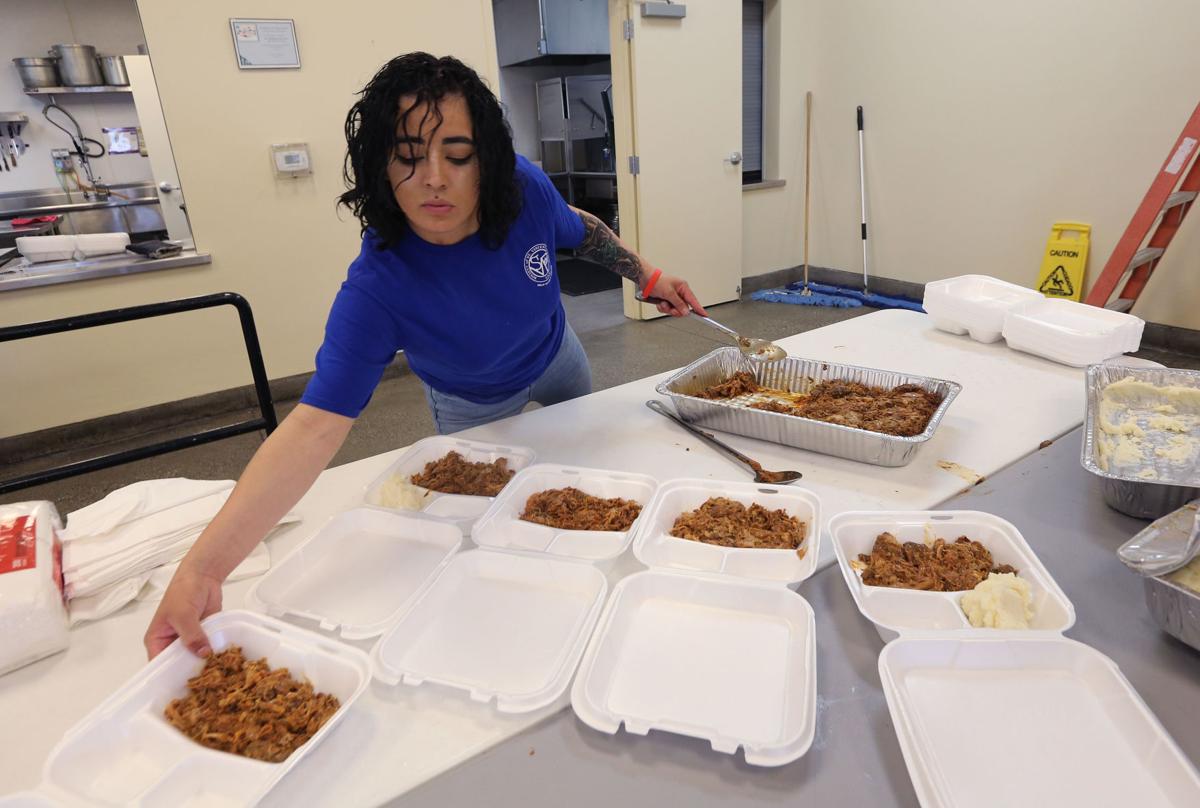 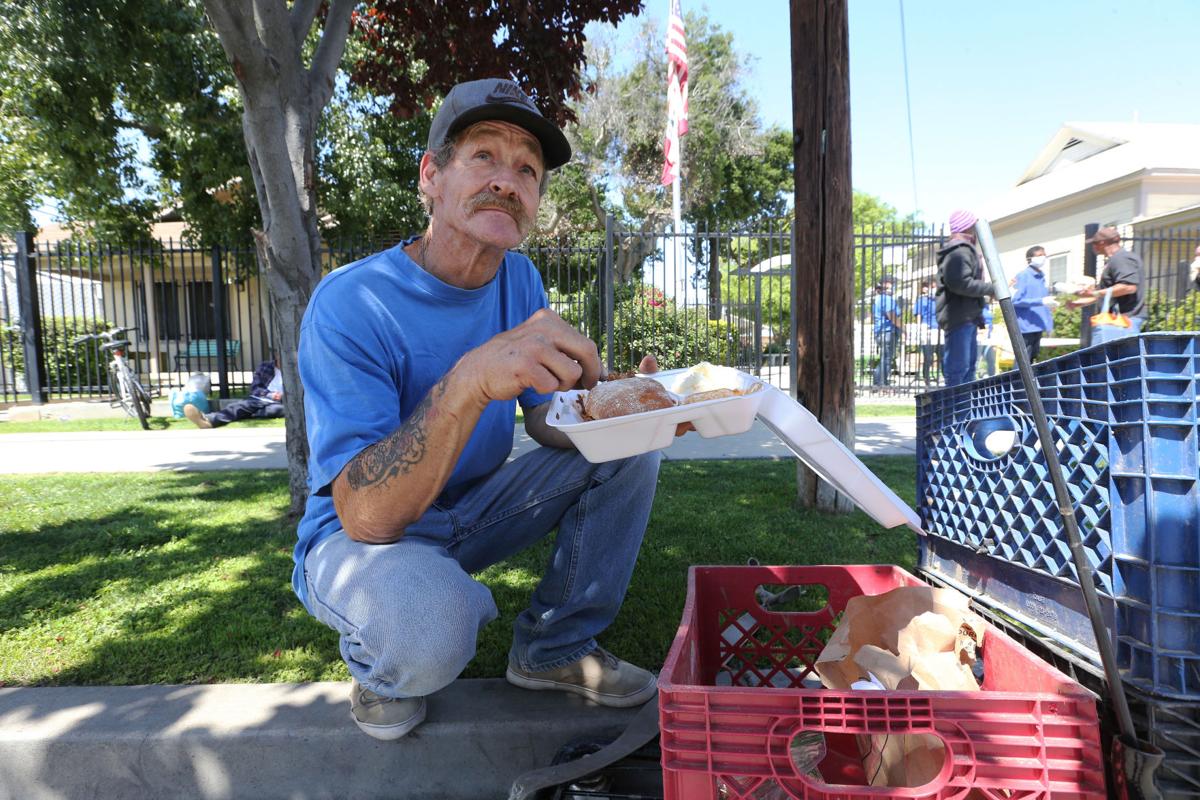 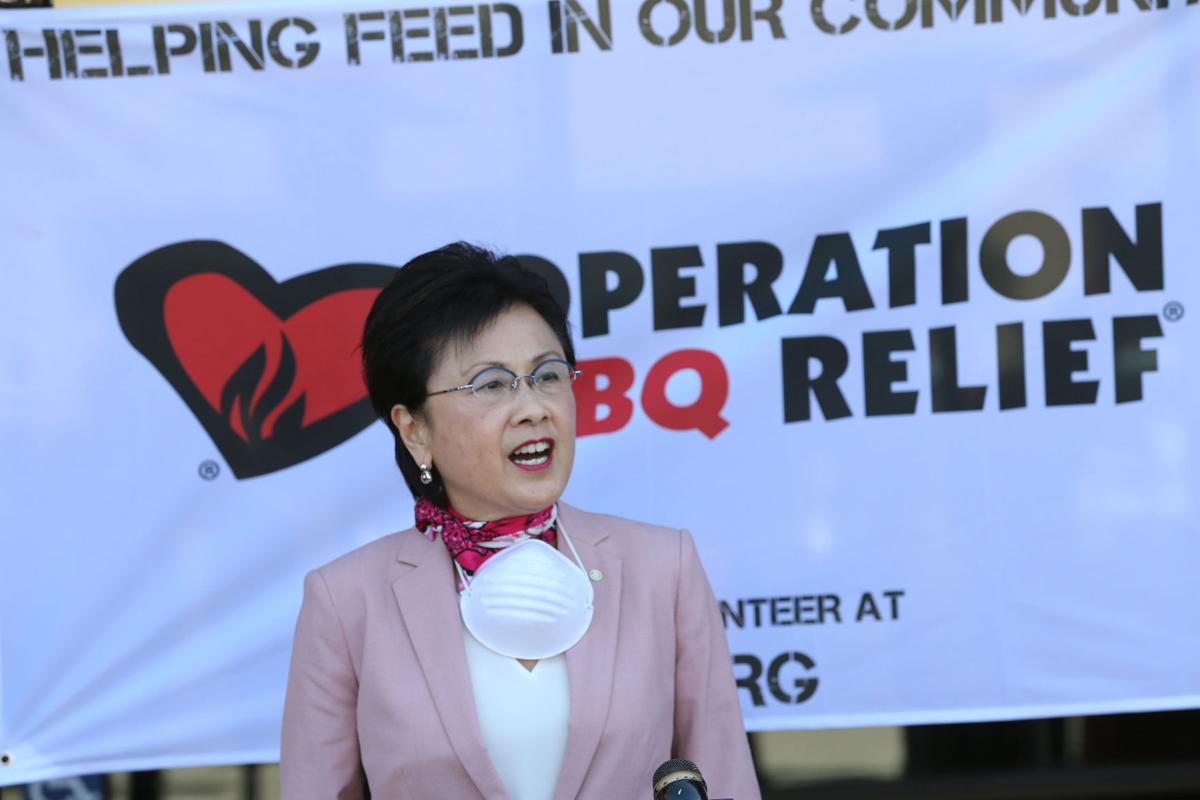 Mayor Karen Goh spoke at a press conference to share the word of Operation BBQ Relief, a relief effort that is providing 35,000 meals to the homeless and those experiencing food insecurity in Kern County during the COVID-19 pandemic. 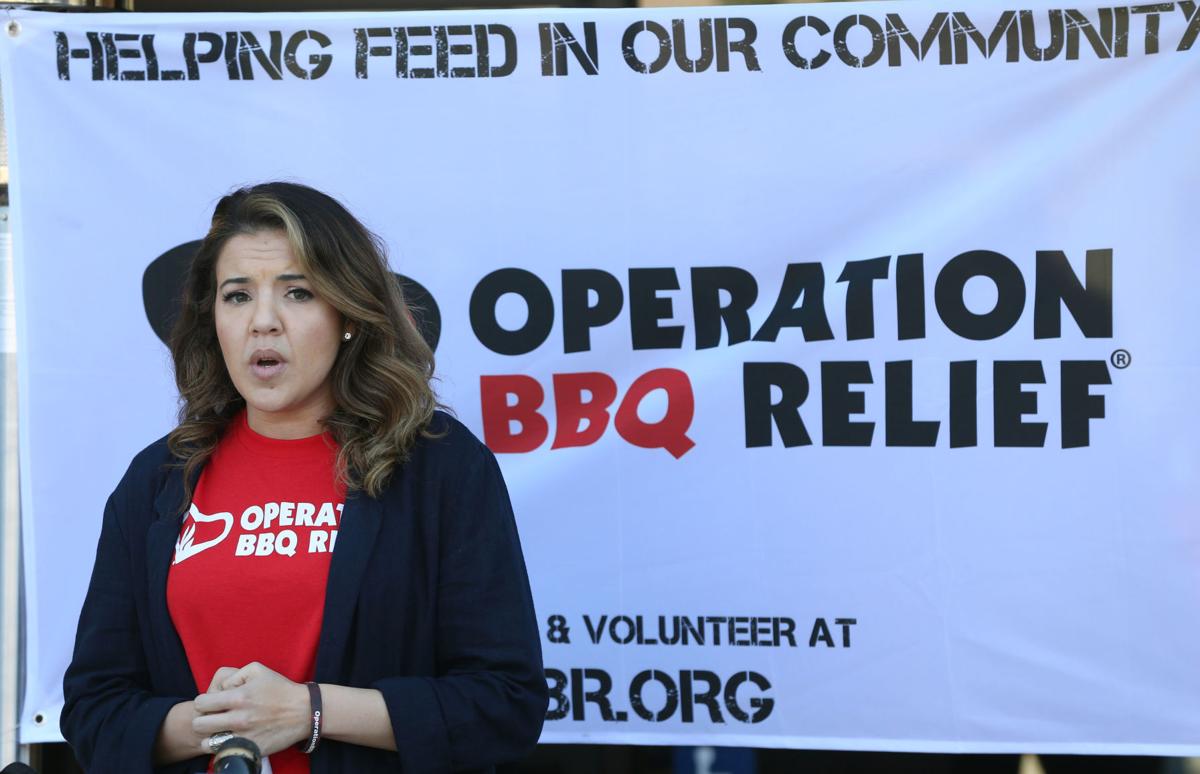 Sonder owner Shannon Brown spoke at a press conference on Wednesday about her restaurant's involvement in Operation BBQ Relief. 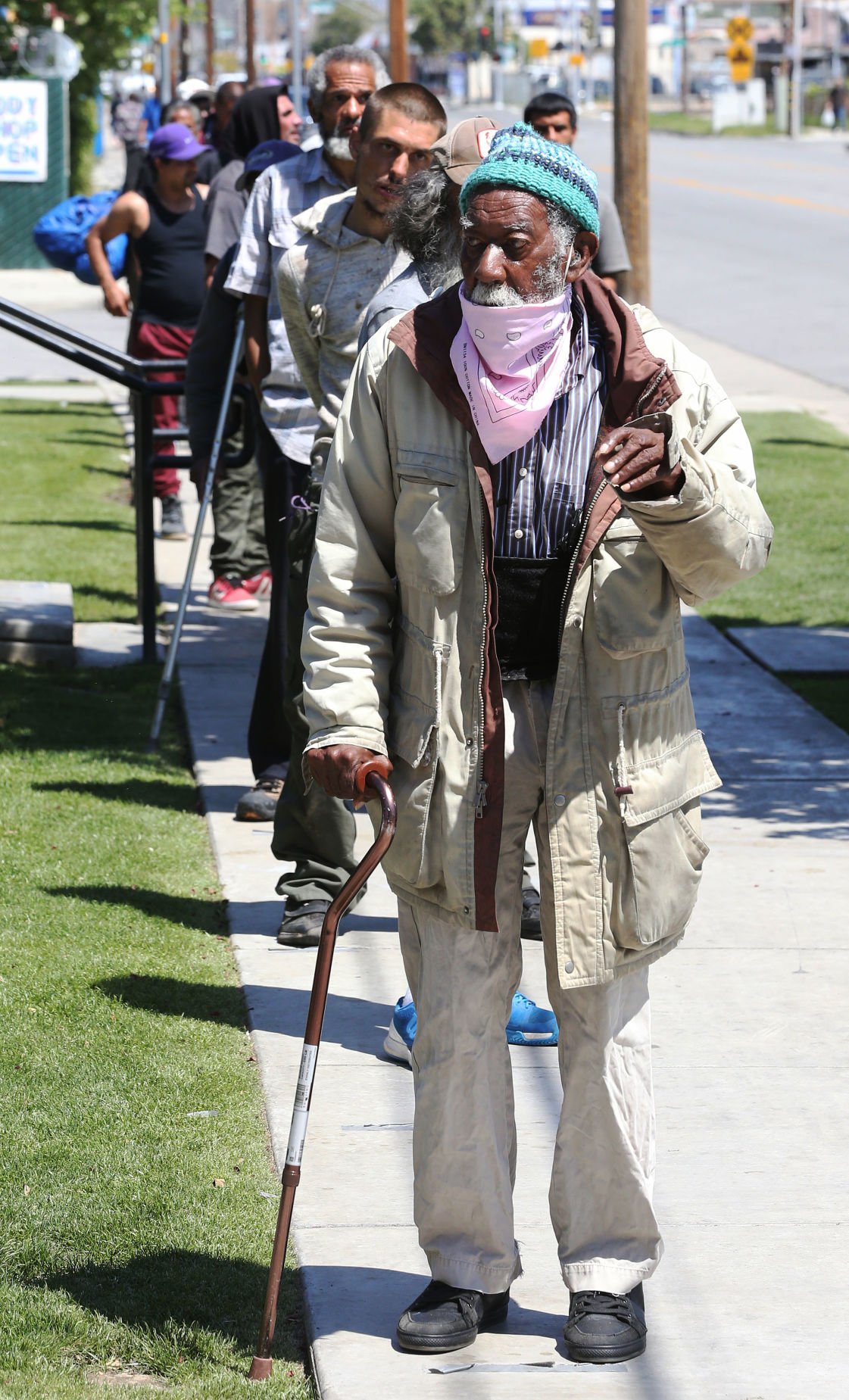 Individuals experiencing street homelessness line up outside of St. Vincent de Paul Bakersfield on Wednesday to enjoy a warm barbecue lunch from Sonder restaurant as part of Operation BBQ Relief.

John Hill provides lunch from Sonder restaurant to individuals experiencing street homelessness. The lunch was courtesy of Operation BBQ Relief, a relief effort to provide 35,000 meals to the homeless and those experiencing food insecurity in Kern County during the COVID-19 pandemic.

Mayor Karen Goh spoke at a press conference to share the word of Operation BBQ Relief, a relief effort that is providing 35,000 meals to the homeless and those experiencing food insecurity in Kern County during the COVID-19 pandemic.

Sonder owner Shannon Brown spoke at a press conference on Wednesday about her restaurant's involvement in Operation BBQ Relief.

Individuals experiencing street homelessness line up outside of St. Vincent de Paul Bakersfield on Wednesday to enjoy a warm barbecue lunch from Sonder restaurant as part of Operation BBQ Relief.

Pulled pork, baked beans and mashed potatoes are among some of the menu items for the homeless Wednesday at St. Vincent de Paul Bakersfield, courtesy of Operation BBQ Relief.

The operation was enacted locally by a $154,000 donation by Dignity Health that enables 35,000 meals from the local restaurant Sonder to be served daily for the next two weeks at entities such as the Bakersfield Homeless Center, St. Vincent de Paul Bakersfield, The Mission at Kern County, and CityServe. Operation BBQ Relief is a non-profit based organization out of Kansas and Missouri that serves displaced individuals during disasters such as the COVID-19 outbreak.

Deborah Leary, chairman of the board at St. Vincent de Paul Bakersfield, said she was contacted last week by Bakersfield Homeless Center CEO Louis Gill and Sonder owner Shannon Brown about the meal program. St. Vincent de Paul began getting meals from Sonder on Monday and Leary said the program has been “wonderful” for those they serve.

“They’re thrilled about the food,” Leary said. “Word spreads quickly if (the food) is in a styrofoam container and it’s hot.”

Charles Bobo, a homeless man who received a meal Wednesday, was thankful for the meal. Typical services provided by the homeless center have been impacted by COVID-19, he said.

“The virus closed things down (at St. Vincent de Paul) so there haven’t been any showers available in the morning or clothes to choose from,” Bobo said. “We used to get coffee and doughnuts in the morning.”

Bobo is an Arkansas native who moved to California to go to college in Visalia, he said. During Friday's meal, he said he was a fan of the pulled pork in particular.

Leary emphasized the center's services are strictly reserved for street homeless, or someone who lives on the streets and has no other temporary shelter. Leary said the center often has to turn people away who arrive in cars looking for a meal.

“We know people who live out of their cars, but unless we know the person, we’re not going to serve them if they arrive in a car that might be nicer than mine,” she said.

Due to the coronavirus pandemic, St. Vincent de Paul has had to turn away volunteers who typically prepare meals for their clients. The center's six staff members are currently putting together 300 to 400 daily meals in assembly-line fashion, Leary said.

St. Vincent de Paul also had to close its thrift store, a primary source of revenue, indefinitely. The center doesn't receive federal or state funding and must rely solely on donations of goods or money.

With that, Leary said there's been an “amazing response” from the community over the past few weeks with donations coming in such as sandwiches, paper bags, tinfoil and tortillas.

“Bakersfield is just wonderful,” Leary said. “The response for anything we have needed is unbelievable.”

Leary said St. Vincent de Paul Bakersfield is still accepting donations, which can also be made online at svdpaulbakersfield.org.

“All money raised stays right here. It feeds the people and pays our staff,” Leary said.

Alexkelly, you are one very sick puppy. Everything you say is not only not of Christian behavior, but a attack on humanity in general. It really displays your inhumane and imoral character. So, the fact that homeless people are mentally and physically disabled should be a reason for euthenasia is disgusting. Shame on you. My hat is off to the responsible and honorable people who are providing these meals to the disadvntaged. They are the children of God.

The “Homeless crisis” is a FARCE. Very few, if any, are actually Veterans, many are mentally deficient/insane & should be in lockdown facilities, the rest are just weak, mean, rude, scheming, shiftless, lazy, system-riding, worthless humans who should be left to the ravages of Mother Nature. If they have children, they should be saved by the state & placed in Foster Care WITHOUT consent. It’s better than allowing their useless parents from turning them into another generation of welfare babies.

@alexkelley- Many of those who you deem as "worthless humans" were once working and paying taxes. Some even owned their own homes. They may have made some poor life decisions that got them to the point where they currently are, but so many were simply too naive and damaged to navigate the system to get the help they needed. The lack of affordable housing is what is keeping this problem from being solved and that is why so many are stuck in tents and living in their cars. In the late 1980's I tried to get help for myself and my young child from the food bank and the KC welfare system. I was told that I should move back into the home of my abuser and give my child over to the county for "safe keeping". It appears this way of treating people is still alive and well in your neck of the woods. I took my child and fled as far as I could and in the end, it all worked out. But I see Mother Nature as a nurturing force and it appears that you see her differently. No human is truly worthless. But I do think we will need more graveyards in the days to come. The days of ascension are upon us and the uprisings will be the greatest show on earth, Will you hide your eyes or run for cover? We humans must see what we have done or will continue to repeat our destructive patterns for centuries to come. In my view.

Color me HAPPY to see and read a story about the good in people. We truly are all one and anyone who chooses not to see that hunger has no economic bias is a truly lost soul in my view. Where there is hope, there is life.

I thought we had the best economy in the worlds history , Oh did they forget we have the worst homeless condition in the world as well ?