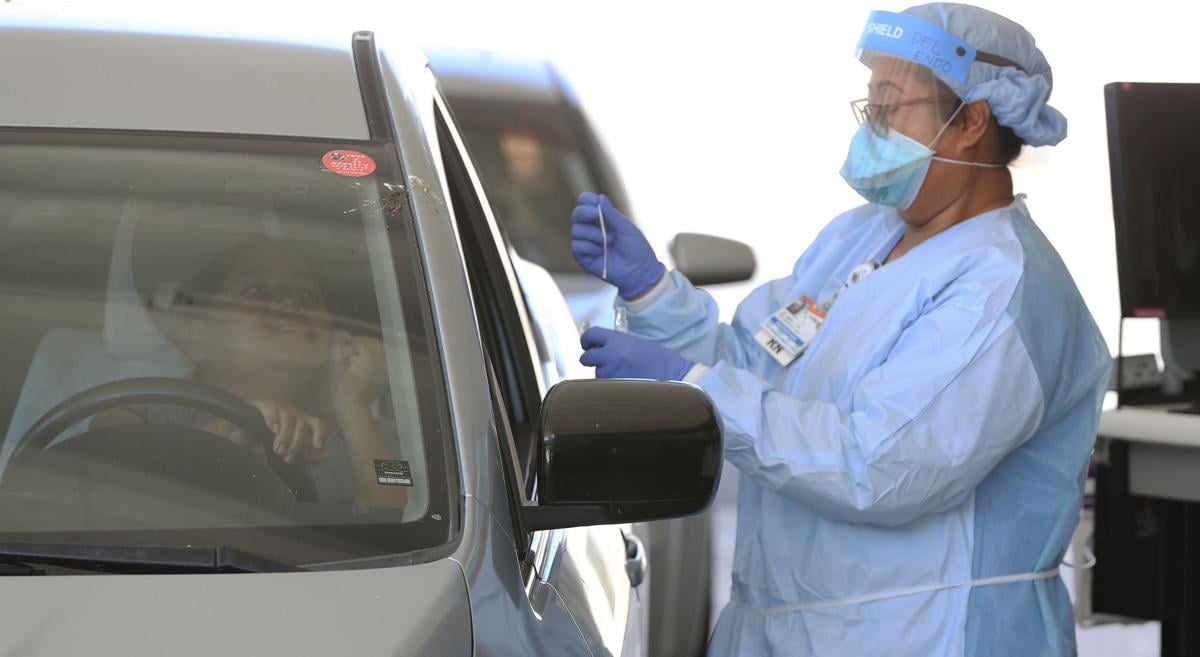 Nurse Del Carmen Sarafian retrieves a swab from during a COVID-19 test in May outside Bakersfield Memorial. Demand for testing has increased in the past two weeks in Kern, officials say.

Nurse Del Carmen Sarafian retrieves a swab from during a COVID-19 test in May outside Bakersfield Memorial. Demand for testing has increased in the past two weeks in Kern, officials say.

Four months after the first COVID-19 case was detected in Kern County, the virus is building momentum, straining hospitals, creating high demand for testing and claiming an average of one death a day now.

"There are a lot of us at the point of just being physically and emotionally exhausted," said Mary Lynn Briggs, an ICU nurse who works at both Mercy Downtown and Mercy Southwest hospitals.

"I’m on a stretch of three days off," she said Wednesday, "and I get emails and text messages, saying, ‘Please come in and work.’ But I just can’t. Physically and emotionally I can’t if I’m going to be any good for my scheduled shifts."

By nearly all indicators, the COVID-19 situation is the worst it's been locally since the pandemic reached here in mid-March.

It's not just the climbing number of cases reported on a daily basis — which were in excess of 200 on Wednesday, Thursday and Friday. Deaths are increasing and the number of hospitalized patients continues to rise. Residents at seven of the 19 nursing homes in the county have tested positive for COVID-19 and health care workers have fallen ill at 13 of those 19 facilities.

Two hospitals — Adventist Health Delano and Bakersfield Memorial Hospital — have been granted staffing waivers, state health officials said Friday. That means nurses can temporarily care for more patients than legally allowed. For ICU nurses, the state usually mandates no more than two patients per nurse. For telemetry units, it's four patients to one nurse and for medical/surgical units five patients to one nurse. But those hospitals can now exceed that.

Briggs said both Mercy hospitals staffed units out of ratio earlier in the week, and county officials previously confirmed that last weekend ambulance traffic had to be diverted from both hospitals because they couldn't take more patients.

Kern County spokeswoman Megan Person said demand for testing has risen in the past two weeks at the 11 state- and county-funded sites in Kern. More than 1,000 tests have been done daily on many recent days. Clinica Sierra Vista has tested roughly 650 people in each of the past two weeks at its clinics, whereas just under 400 tests were done the week before that period.

In all, more than 75,000 COVID-19 tests have been done in Kern County, according to county data. The time to get results has also slowed down for many sites, with reports of six- and seven-day waits for results.

Quest Diagnostics, a major processor of the test samples taken in clinics and at testing sites, acknowledged a backlog in processing this week due to increased demand for testing and said it's working to build more capacity. Results are now taking four to six days, the company said.

"Since June 29, demand has continued to rise nationwide, particularly in the South, Southwest and West regions of the country, outpacing our capacity," the company said in a statement Monday.

County officials and local health care leaders continue to repeat their pleas for the public to wash hands, wear masks and social distance.

"There are still so many people who think (the virus is) a conspiracy and there's really no need to wear a mask," Briggs, the ICU nurse, said. "I can rant and rave all I care to about wearing a mask, social distancing, etc., but it’s not going to do any good when there are so many people who are not convinced it’s a problem. I think this thing is going to keep getting worse until we get people to realize it is a problem."

Q: When should you be concerned about a possible exposure to COVID-19?