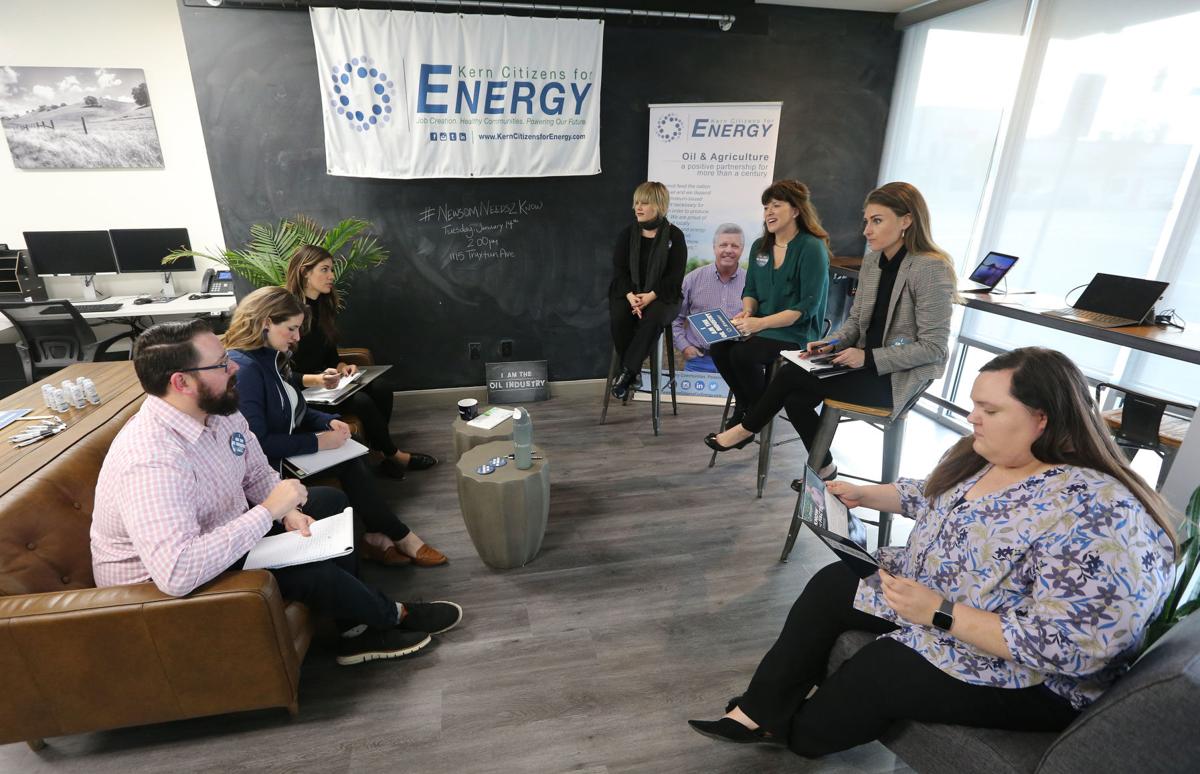 The team at Providence Strategic Consulting — from left, Aaryck Enriquez, Madison Carter, Kealy O'Brien, Lynn Hetrick, owner Tracy Leach, Rachel Glauser and Alison Votaw — head up the effort to build an oil and gas coalition. The idea is to express support for the industry as it faces a stiff new challenge from a state government planning to diminish California oil production. 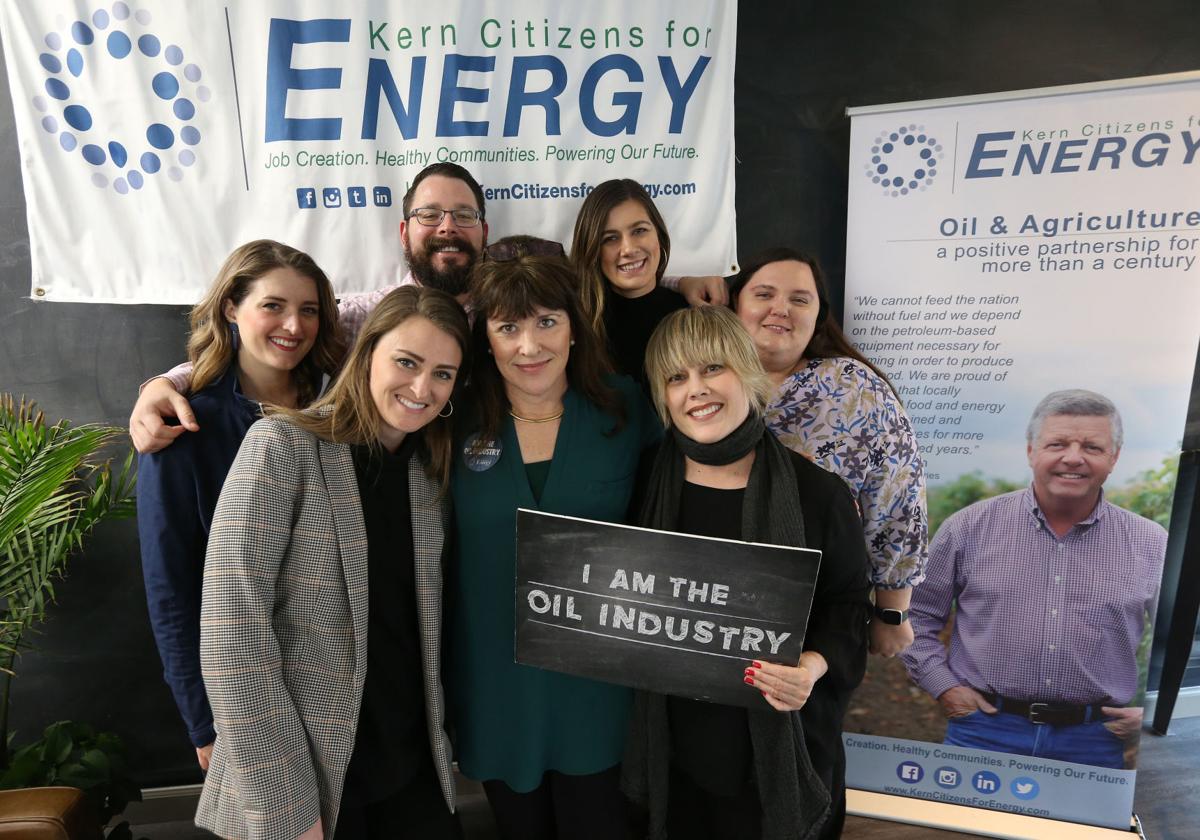 Tracy Leach, center, and her team from Providence Strategic Consulting head up an effort to build an oil and gas coalition to express support for the industry as it faces a stiff new challenge from a state government planning to diminish California oil production.

The team at Providence Strategic Consulting — from left, Aaryck Enriquez, Madison Carter, Kealy O'Brien, Lynn Hetrick, owner Tracy Leach, Rachel Glauser and Alison Votaw — head up the effort to build an oil and gas coalition. The idea is to express support for the industry as it faces a stiff new challenge from a state government planning to diminish California oil production.

Tracy Leach, center, and her team from Providence Strategic Consulting head up an effort to build an oil and gas coalition to express support for the industry as it faces a stiff new challenge from a state government planning to diminish California oil production.

Kern County’s oil industry has learned the hard way that it may help to present a human face when debating regulations.

A local coalition funded by industry and followed on social media by nearly 11,000 people is calling on supporters to turn out for a Jan. 14 county Board of Supervisors meeting at which top state oil regulators will testify about the Newsom administration’s recent moves curtailing, and plans to permanently reduce, in-state production.

It will be Kern Citizens for Energy’s biggest public event since late 2015, when it attracted hundreds of mostly local oil field workers wearing stickers saying “I Am the Oil Industry” to a meeting where the board approved a landmark overhaul of the county’s oil regulations.

Oil leaders have said repeatedly at local conferences that the industry needs to share personal stories conveying the value of oil field work opportunities to families. Their idea is to counter what has been seen as effective messaging from groups pushing for stricter air and groundwater protections and aggressive action on climate change.

Industry groups support a variety of informational campaigns and organizations. But none has mustered bigger crowds in the heart of California oil production than KCE.

The group’s central organizer, Tracy Leach, owner of Bakersfield’s Providence Strategic Consulting, said she anticipates hundreds of KCE supporters attending the 2 p.m. hearing at the Board of Supervisors meeting at its chambers downtown.

“As Kern Citizens for Energy our focus is on engaging Kern County and ... keeping (Sacramento officials) aware of what we believe here and what we know to be true on our security and economy and way of life in California,” she said.

The coalition, started and supported by financial contributions from local oil companies, has grown during the past five years, Leach said, as it tells its members’ stories and offers information about the economic value and safety of petroleum production and how most of California’s oil supply comes from overseas.

The group’s membership, she said, has been energized by the Newsom administration’s stated plan to begin “managing the decline” of in-state oil production.

“We can see a lot of unhappiness with the governor and that’s translated into them getting more involved with us,” she said.

KCE could fit nicely with a plan the Board of Supervisors approved Dec. 10 to send a message to Sacramento about oil’s local importance to local employment and tax revenues.

The board voted unanimously to invite the oil industry to come make a public presentation about the impacts of new oil regulations. The resolution also called for organizing a coalition to tell Sacramento about the industry’s local importance and consider declaring an “economic crisis” over the state’s anti-oil actions.

Leach said county government has provided no direction to KCE.

Local environmental justice advocates have said they plan to be there calling for greater health and safety protections in California oil production.

WSPA spokeswoman Kara Greene said the trade group will send representatives to the meeting. She added that the proceeding “is a great platform for us to talk about the hardworking men and women of the industry.”

CIPA spokeswoman Sabrina Lockhart noted the group has actively worked, like KCE, to promote the industry at public meetings, including at county-level government proceedings.

One group it supports is Californians for Energy Independence, a statewide coalition that has pushed back on efforts to restrict domestic oil production, Lockhart said. That group, along with California Energy Workers and Careers in Energy, is intended to do similar work as KCE.

“We also want to make sure that our workers have a way to share their concerns about these policies that would put their jobs at risk,” she said.

This story has been amended to correct the spelling of Rachel Glauser's last name in a photo caption and fix the language printed on stickers worn by KCE supporters.

This is what worries them. Supply over demand. Jobs aren't increasing and well sites will be left contaminated because companies don't care if they clean up as they pull out.

But, us tax payers will be stuck with the tab. Hate Newsom?

You don't even know who your abuser is, do you ?

Can’t read the article without a subscription. And I’d rather stick with the devil I know than the devil I don’t. Newsom is reckless and has no idea what he’s doing. He’s too busy focusing on the presidency. As long as he’s the face of California Democrats, I won’t be voting for any Ds.

Omg. The money being paid to these b.s. P.r. Firms. Nice picture. Like they care.

It's a wonder how a community can continue to be abused, laughed at and looked down at. Omg... Have some pride.

Even more money being paid to the lobbyists on your side of the aisle, Lily...

Have some pride? Aren't you the one that bad mouths Bakersfield more often than anyone on this site? Practice what you preach...

Gene pool, have some pride. Your town is a joke to many people who drive past, much less stop.

The city pays p.r. companies to " change" the image of Bakersfield. It doesn't work. Now the oil & ag. Industry are paying yet another p.r. company to b.s. government officials into believing they don't pollute. Omg....what a joke.

You think I'm mean? Oh, you should know what people really think of the area and rightly so.

No need for public relations companies if you cleaned house.

I have pride, where is yours ?

"My" town, so I'll take the bait and infer you don't live here? If so, is your life that boring that you troll a city's news site because you have nothing else to do?

Why don't you just go away and display your ignorance in the city (or single-wide) of your domicile?

So you want the people who work at PR firms to be out of a job too, huh? Who is allowed to work, LilyRose?

Anyone who wants to work, works. All kinds of work. Money is money. Public Relations/ spin doctors/ face of the company what ever. Who cares.

Someone has to suffer for someone else to make money. Right?

When I watch locals suffer and allow their children to suffer in able to make money, I think ok. However, to watch locals cheer as a group of paper pushers, paid for by the very industries that causes the suffering, lobby on behalf of oil and Ag, then I am astonished. They aren't lobbying to keep your job going. They are lobbying to make themselves wealthier. They are being paid to lie. No one believes them. The oil industry is fighting to have regulations loosened so that operating costs are kept low. Whether you have a job or not isn't their concern.

Dabonem: If you have less than 10 years to work, don't change jobs. However, if you have longer, you might want to learn a new skill or gather some fellow employees and invest in recharging stations in Kern county or scrubbers for the flare stacks, or what ever. There has to be better.

Next time you watch the weather report on the news and the air quality index report pops up, remind yourself, that you and Tracy Leach, Rachel Glauser and Alison Votaw of Providence Strategic Consulting are lobbying to keep those numbers high. Status -quo. And that affects me. Financially.

And don't you want me gone?

You are a hyperbolic person who is only capable of screeching. Oh the whole community is suffering and we are all being abused because you choose to live in a place you don’t like.

Yes, I do want you gone and I’d like you leave in an ideologically consistent way. See, people like you are the absolute worst for society. Everybody knows you drive a car, you ride in cars, you purchase goods delivered by truck, etc.. You will never put your money where your mouth is and that is exactly why you are so upset about everything. You know you can’t live up to your own ideals so you lash out, pretending to be a defender of the community or whatever, but the reality is simple: you are living a lie and are incapable of squaring that circle.

You clearly are not a local. You are very clearly an emotionally unstable human being. I feel bad for you and suggest you seek professional help.

You found a new career ! Psychologists . Thanks for the diagnosis.

Wow dab, you hit the nail on the head. And from their response you obviously hit too close to home. As a result maybe they will finally get help as you suggest.

I can't help but notice how some of your posts are a car wreck of grammatical mistakes, while others could pass for high school writing.

Makes me wonder which of your posts you are actually composing???