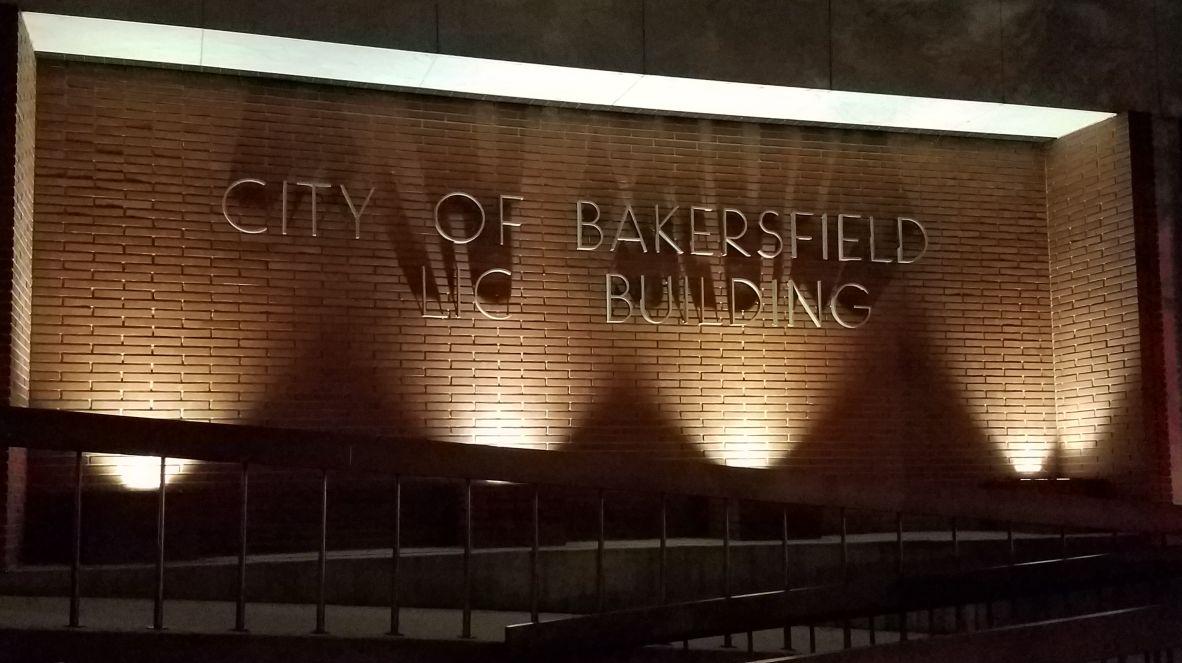 BPD asked for the public's help identifying a suspect they said threw bottles at officers Saturday and removed the letter "E" from the police building. 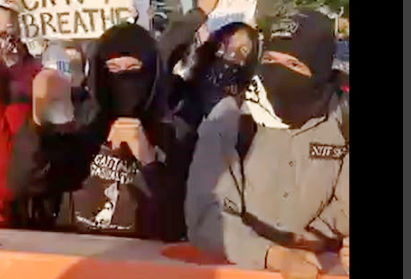 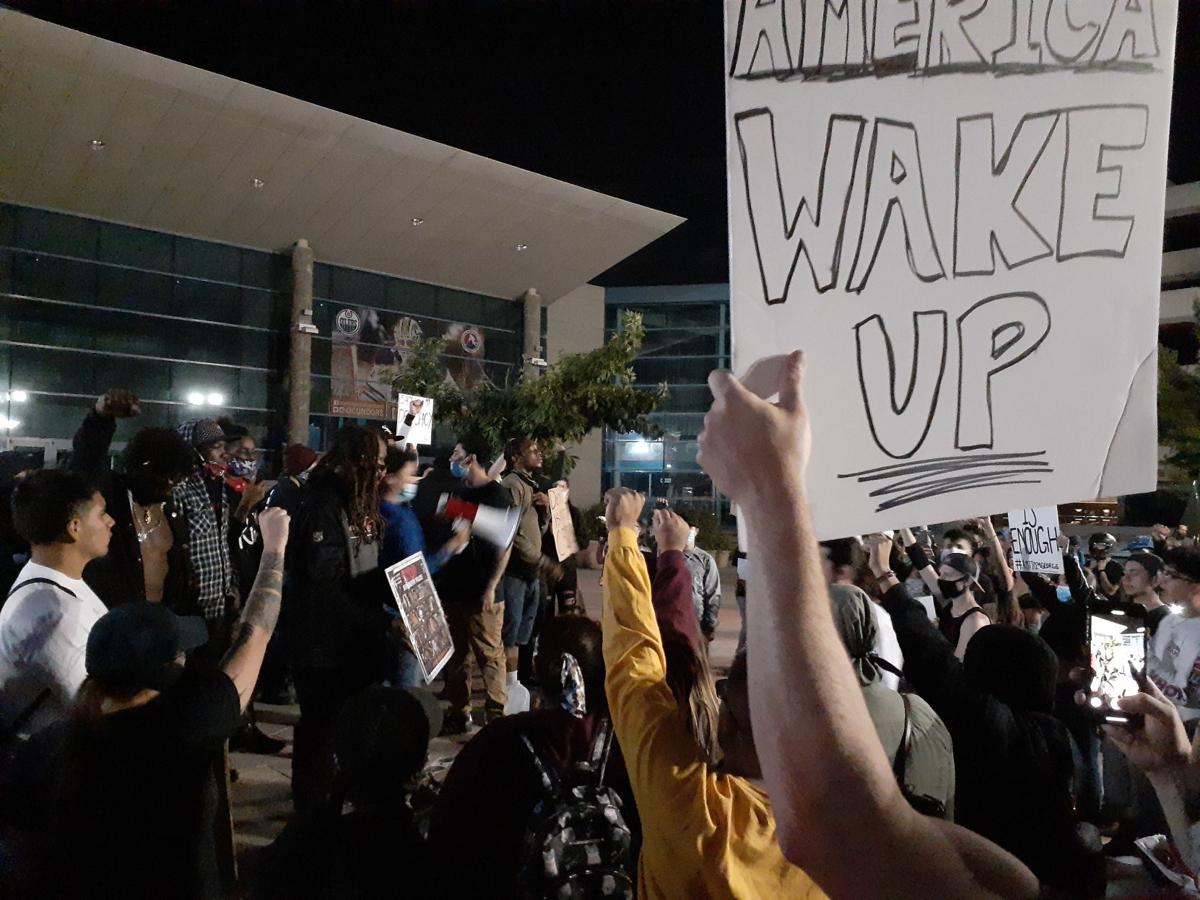 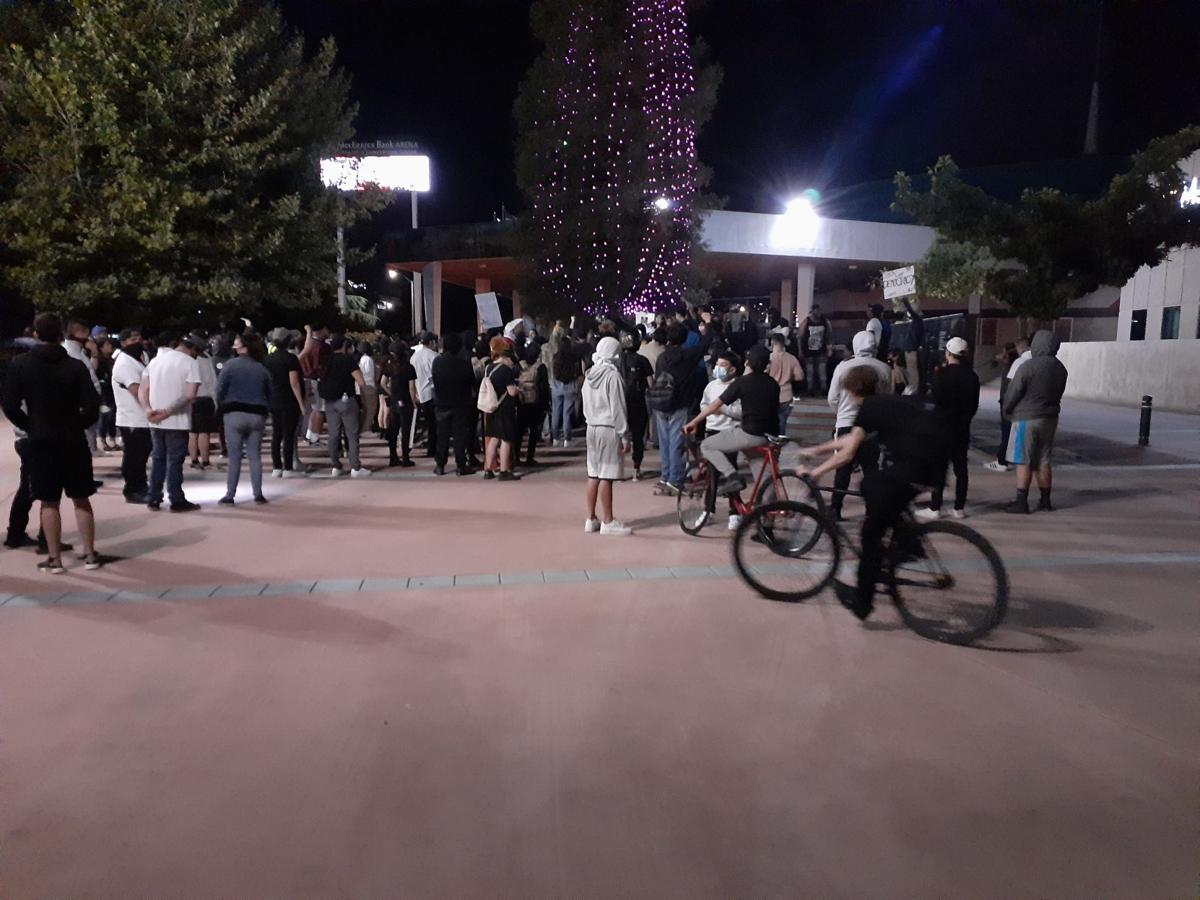 BPD asked for the public's help identifying a suspect they said threw bottles at officers Saturday and removed the letter "E" from the police building.

A protester fired a Roman candle firework at a police officer and property was vandalized Saturday during a second night of protests in downtown Bakersfield over police actions and the death of George Floyd in Minneapolis.

The protest Saturday night, centered in the 1600 block of Truxtun Avenue in front of the Bakersfield Police Department headquarters, was largely peaceful for several hours.

But police said that at about 8:45 p.m., some 100 to 200 people gathered directly in front of the department and some tried to forcibly enter, a BPD news release issued just before midnight said. Some defaced the building by removing some of the letters that spelled "police" that were affixed to the building.

That's when officers went to Truxtun Avenue and H Street, the gathering was declared an unlawful assembly and people were told to disperse, the police news release said.

As officers moved the demonstrators east toward Chester Avenue, someone fired a Roman candle at an officer, BPD reported. The officer wasn't hurt and the crowd left that area.

Some people walked to Mechanics Bank Arena. Police noted the majority held a peaceful demonstration there, but someone vandalized the Centennial Plaza donor wall. A photo released by BPD shows an expletive was scrawled on the wall.

While nobody was arrested, police are investigating the assault with the Roman candle and the vandalism.

Sunday evening, BPD asked for the public's help identifying a suspect they said threw bottles at officers Saturday and removed the letter "E" from the police building.

The suspect is described as a black man in his 20s, with shoulder-length braids who was wearing a black shirt and black long shorts. Police ask that anyone with information call 327-7111 or Detective K. Ursery at 326-3871.

The first suspect was described as a man of unknown race wearing a long-sleeve gray shirt, long dark pants, black head wrap and wearing a black backpack with a white, square patch attached.

Protesters take to downtown streets for second night in Bakersfield

You wonder why officers take excessive measures during arrests.

Bingo, Ruby Sue. It looks like Moardeeb missed the parts of the article about the mob assembling unlawfully, trying to storm the police station and damaging property. I’m guessing there were no local Democratic leaders on hand to tell them to knock it off as Leo Terrell is calling for: https://www.foxnews.com/media/leo-terrell-civil-rights-attorney-calls-for-end-to-riots-destruction

If these folks truly want justice for Mr. Floyd, they are doing it the wrong way and instead are just prolonging anarchy. To whom should the bill for all the damage caused be sent to?