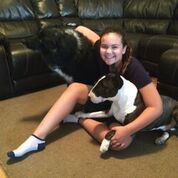 Eleven-year-old Faith Herrod, recovering from valley fever, plays with Moses, Ninja and her other four pets when she has the energy for it. 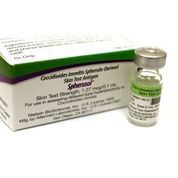 Spherusol comes in vials of 10 doses. A positive result indicates a previous bout with valley fever and an acquired immunity to the disease.

Eleven-year-old Faith Herrod, recovering from valley fever, plays with Moses, Ninja and her other four pets when she has the energy for it.

Spherusol comes in vials of 10 doses. A positive result indicates a previous bout with valley fever and an acquired immunity to the disease.

Faith Herrod wants to be a veterinarian when she grows up. The 11-year-old lives in Lemoore with her family, three dogs and three cats. Someday, she’ll get a rabbit, too — as soon as her mother lets her.

In her free time, Faith should be out playing with her dogs. But for almost a year, she was not able to do so. She would come home from school at 4 p.m. and go right to bed. That’s because last October the sixth-grader was diagnosed with valley fever, a fungal infection that kept her out of school for months and left her with regular headaches and chronic pain.

Faith contracted valley fever by breathing in fungal spores carried by the wind. That’s how the disease is contracted, and it can happen at any time.

Faith’s mother, Caren Herrod, isn’t entirely sure when it happened, but her best guess is while they were doing yard work one day —something they had done dozens of times before. Herrod never imaged that, after so much time, Faith would not have built up natural immunity and that she could still be at risk.

“If I had known that she was susceptible, it would've been different,” Herrod said. “We would've done things differently.”

As it turns out, Faith and her mother could have known. A new skin test called Spherusol can detect whether a person has developed natural immunity, meaning they’ve overcome valley fever before. Because most valley fever cases are asymptomatic, many people whose immune systems have battled the disease may never know it.

Advocates are excited about the test. So are doctors — like Dr. John Galgiani, director of the University of Arizona’s Valley Fever Center for Excellence. He dreams of seeing Spherusol being used as a tool to screen for past infections.

“I think that Spherusol's best use will be in primary care doctors' offices, to test their patients on a routine basis to find out if they've indeed previously had valley fever,” Galgiani said.

If patients knew they had never conquered valley fever, they could better prepare themselves against it; and doctors might be more likely to diagnose the disease if patients showed unusual symptoms.

Experts call for a change in FDA rules on promising test

But despite its promise, the test isn’t in wide use.

That’s because the Food and Drug Administration hasn’t approved Spherusol for testing immunity. Instead, the test is supposed to be used by clinicians only after a person has been diagnosed with the disease. Galgiani and others would like to see the FDA change the rules to allow its use whenever a clinician thinks a test is warranted.

“If the labeling is changed to allow the test to be used to test for prior infection, then it opens up a whole different value of the test to the clinical community,” Galgiani said.

Valley fever lurks in dirt and dust in the desert throughout the Southwest. Most people who inhale the spores fight off the disease without ever knowing they had it. Some develop flu- or pneumonia-like symptoms. In rare cases, it can cause severe lung infection or disseminate throughout the body, requiring lifelong treatment or leading to fatal meningitis.

But there is some good news.

“Once you've had valley fever and gotten over it, you are for all practical purposes immune from a second infection,” Galgiani said.

Revealing a disease exposure with a skin test

That’s why Spherusol could have such an impact: It could reveal a person’s history of exposure. Before, that was something most people could only wonder about.

Spherusol works similarly to a tuberculosis skin test. A clinician injects a small amount of spores under the skin, and the reaction indicates whether immunity has developed. Similar skin tests for valley fever were first developed in the 1930s, but the most recent iteration was discontinued in the 1990s after the company that produced it was unable to turn a profit.

Spherusol was released in 2014 and costs about $62. No studies have directly compared its efficacy to previous tests.

Right now, Spherusol is only indicated for use after a patient has already been diagnosed with the disease. So, instead of being used as a way to determine valley fever exposure, it’s considered a sort of immune system checkup for those recovering from the disease.

“It’s indicated for understanding how their body is reacting to the disease,” said Tom Carpenter, president and CEO of Nielsen Biosciences, the Arizona-based company that developed Spherusol. “Is their immune system engaged? Or is their immune system overwhelmed? Or are they potentially immune-compromised and not even able to respond to the infection?”

Carpenter says that screening patients could be a great way to use the test, but getting the FDA to approve a change in the labeling could take years. It would involve new clinical trials and potentially millions of dollars of investment. He says his company is looking into it.

In the meantime, however, he points out that doctors are already allowed to use Spherusol for off-label uses.

“Health care providers right now have the ability to make a medical judgment on how best to use the skin test,” Carpenter said. “So, it’s certainly not preventing them from making that use, but we can’t speak to that use.”

But using Spherusol off-label has challenges — like its price tag. A single test may not break a budget, but regular valley fever screening would mean periodic trips to the doctor to pay $62 for a prick under the skin.

Most health insurers in California, including Medi-Cal, say they cover it — but only for its prescribed use. Even then, some insurers could reimburse as little as $4. By contrast, a patient getting a flu shot would likely pay nothing, and the clinic would be reimbursed up to around $35.

And then there’s the fact that the test is packaged in bulk. Spherusol can only be bought in vials of 10 doses; once the vial is open, the countdown to expiration begins.

Dr. Royce Johnson, chief of infectious disease at Kern Medical Center in Bakersfield, says the test is “extraordinarily stable.” Even so, he said, many pharmacies have policies against storing products more than 30 days after they’ve been opened.

“If you don't use it all, it costs a lot of money,” Johnson said. “So there’s some resistance to stocking it.”

Another problem? Spherusol is only approved for 18- to 64-year-olds, even though children can be hit hard by valley fever and the CDC says people over 60 are most at risk.

Despite all of its obstacles, the test has been used to screen one very large patient group: California state prisoners, where it appears to be helping to prevent the disease.

Prisoners who test negative to Spherusol, which indicates they haven’t built up an immunity to valley fever, are not sent to serve their terms in the two Central Valley prisons hit hardest by the disease.

Caren Herrod may wish that her daughter Faith had access to Spherusol a year ago, but she admits that still wouldn’t have solved the root of the problem: that she didn’t take valley fever seriously enough because so little information about it is available.

“It’s so, so limited,” Herrod said. “With a disease that is so prevalent, for there to be so little information, it’s sad. It's very sad.”

Meanwhile, Faith is back at school full-time, and hopes she can soon take her dogs Moses and Jasmine out for a walk.

This project results from a years-old venture – the Center for Health Journalism Collaborative – that currently involves The Bakersfield Californian, Radio Bilingüe in Fresno, Valley Public Radio in Fresno and Bakersfield, Vida en el Valle in Fresno, the Voice of OC in Santa Ana, the Arizona Daily Star in Tucson, La Estrella de Tucsón and CenterforHealthJournalism.org.

The collaborative is an initiative of the Center for Health Journalism at the University of Southern California’s Annenberg School for Communication and Journalism. You can view our previous work on valley fever at www.centerforhealthjournalism.org/valleyfever.

He was probably best known for his pioneering efforts to develop a vaccine or a cure for the disease known as valley fever. But to family and …