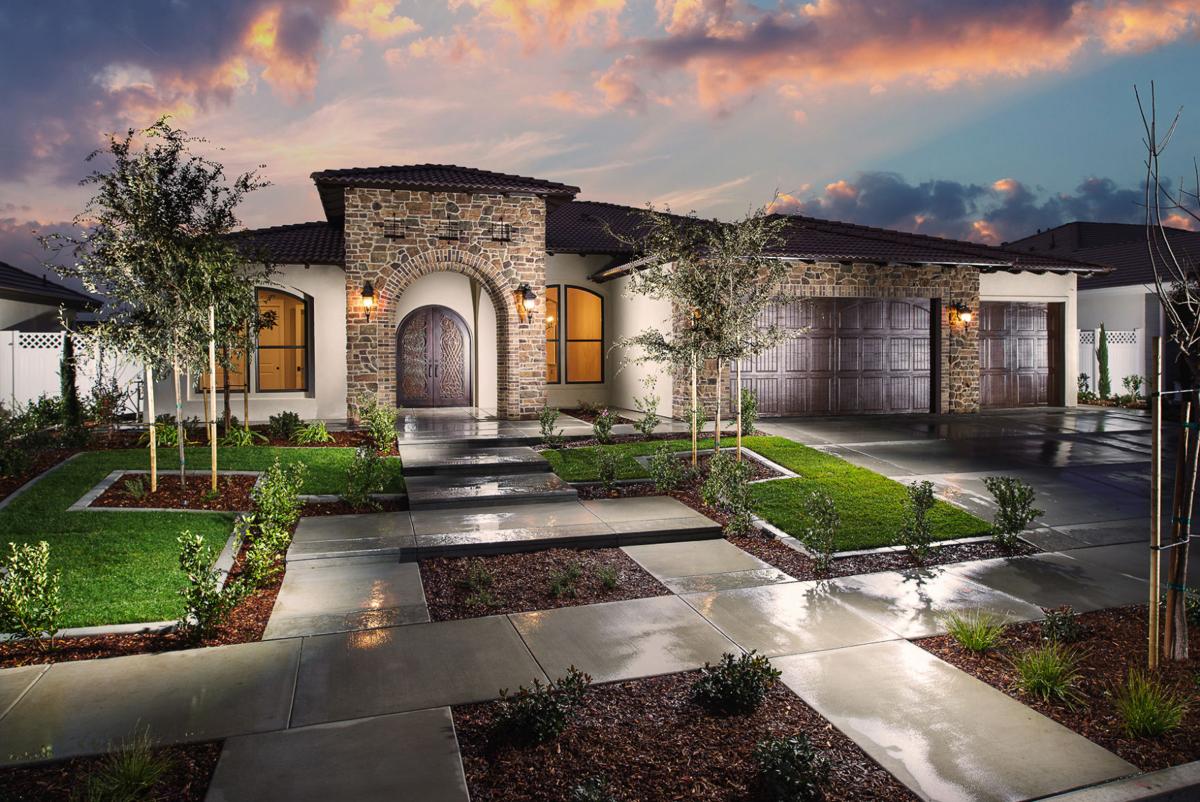 This Delfino custom home is part of Castle & Cooke's Highgate Shires neighborhood near Ming Avenue and South Allen Road. At up to 3,652 square feet in size, homes there start at $480,990. 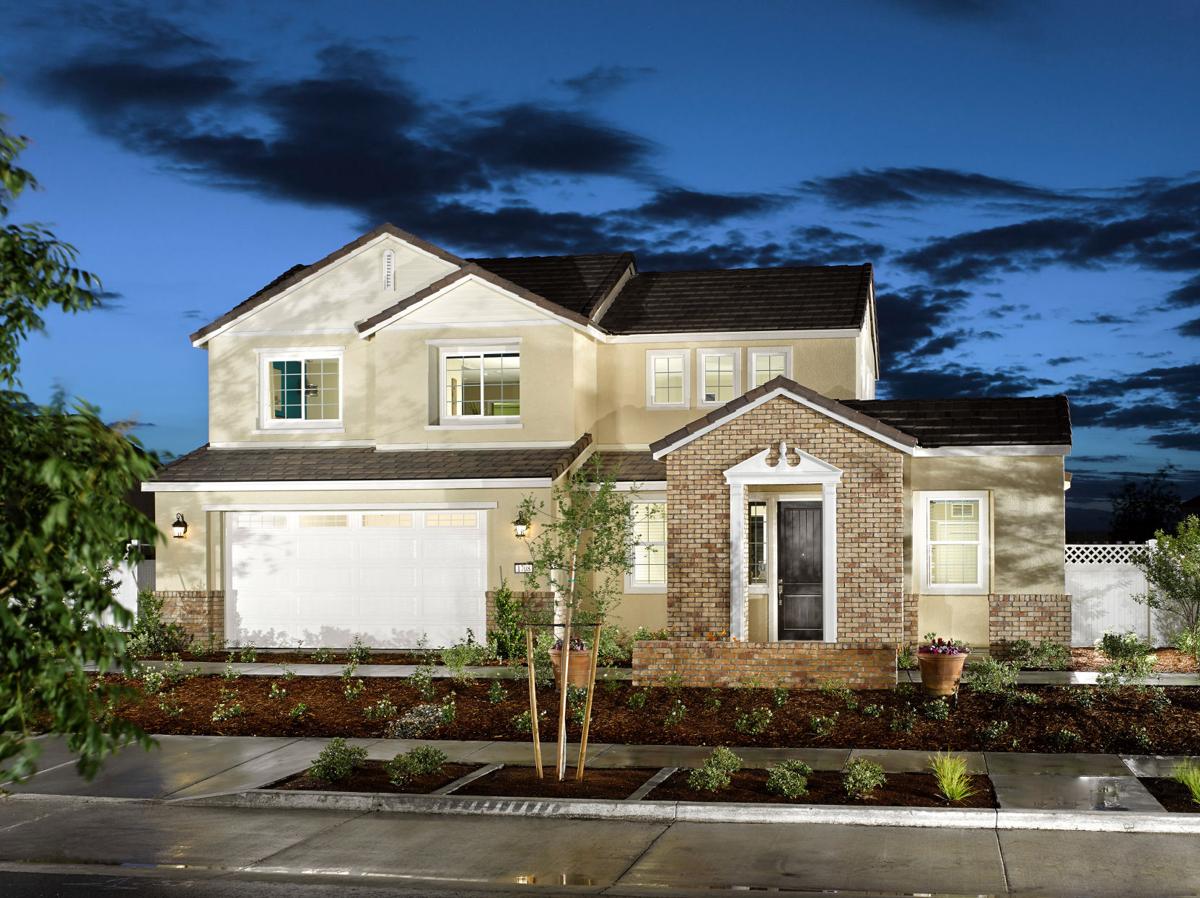 This Delfino custom home is part of Castle & Cooke's Highgate Shires neighborhood near Ming Avenue and South Allen Road. At up to 3,652 square feet in size, homes there start at $480,990.

New homes are on the upswing across Bakersfield as a shortage of resale properties, combined with financial incentives and creative amenity packages, persuades shoppers to take a second look at some of the city's newest neighborhoods.

Permits for new residential construction so far this year are up more than 27 percent as compared with 2018, according to recent data that also show new home sales accounted for a growing share of local sales in each of the last three months.

Resale homes still outsell new construction by a wide margin, as they have for many years. That's probably going to continue because, overall, older properties cost less money than newer ones.

But with Bakersfield's inventory of resale homes lagging at historical lows, and more homebuyers opting for the convenience and efficiency of new homes, homebuilders are pulling out the stops with an array of houses priced for buyers young and old, wealthy and working-class.

"What I think it is, is that we have new product out there available that is not the same old house, if you will," said Bruce Davis, senior vice president of development at Bolthouse Properties, a local company that has partnered with different homebuilders to develop whole new neighborhoods in southwest Bakersfield.

In September, only 918 resale homes in Bakersfield were listed for sale, down by more than a fifth from a year before, when inventory was already relatively tight, according to numbers provided by local appraiser Gary Crabtree.

The lack of supply has helped support prices — September's median was up almost 6 percent, year over year — but it has also pushed people to the new-home market.

Sales of new homes have risen as a share of all local sales since June, gradually increasing from 11.7 percent that month to 17.4 percent in September, according to Crabtree's data, which also shows new homes' market share is up year over year. Crabtree pointed out, however, that new homes' market share fluctuates substantially and has generally declined during the past three years.

Local realtors say they have noticed increased interest in new homes and say there seem to be several reasons for it. If nothing else, the trend is helping meet market demand.

"New construction is taking up the slack that's giving us a more level market," said Athena Collup, 2019 president of the Bakersfield Association of Realtors.

She gave credit to HGTV, the popular cable-TV channel with a seemingly endless stream of shows about home renovations. These programs introduce shoppers to things like open-concept layouts and modern amenities — features that are largely unavailable in many older homes and which younger buyers may not have the skills to install themselves, Collup said.

"Chip and Joanna Gaines are not available," she said, referring to the stars of a popular HGTV show about fixer-upper homes.

Bakersfield real estate broker Alfredo Bahena pointed to one of the city's greatest economic assets — more than half of Bakersfield residents can qualify to buy a home in the city, which is about twice the state's average — as a big reason people from as far away as Irvine and even San Francisco are checking out the local inventory of new homes for sale.

Lately he has been showing potential buyers a neighborhood near Breckenridge Road and Morning Drive called Cascata, by Jeremy Willer Construction. With homes sized between 1,249 and 1,810 square feet, the development's homes range from $219,900 to $249,900 — prices unheard of along the coast.

Sweetening the deal, he said, are incentives of up to $6,000 to help with closing costs. Depending what a buyer is looking for, he said, it may be hard to find something comparable.

Crabtree, a careful observer of the local housing market, said local homebuilders are being creative about how they keep prices so low even as the cost of materials rises.

Instead of a concrete roof, he said, they may put on a composition shingle roof, or install formica countertops in place of granite.

Likewise, developers may offer a buyer's incentive that can be applied to closing costs or to some kind of upgrade package, Crabtree said.

"There's that flexibility," he said, "and I think that's very attractive to a new-construction buyer."

Castle & Cooke is an example of a developer offering homes at a variety of prices geared toward different kinds of buyers.

Its Highgate series of master-planned communities near Ming Avenue and South Allen Road caters to entry-level buyers, active adults and even high-end residents.

Highgate's smallest homes, built as small as 1,460 square feet, start at $308,990 and are designed for active adults, Sales and Marketing Vice President Darlene Mohlke said. And while some custom homes in the development can cost more than $1 million, she noted that Castle & Cooke's "executive" homes start at $480,990, with sizes between 2,587 and 3,652 square feet.

"It's really about what point in your life are you," she said, "because we have it for you."

Another reason people sometimes turn to newly built homes, she asserted, is their efficiency. She said they often have solar power systems, highly efficient appliances and drought-tolerant landscaping.

Plus, if people watching cable-TV decide they want to remodel their kitchen, she said that can cost tens of thousands of dollars. Why not just buy new?

"I think we are fueled from a lot of the HGTV," Mohlke said.

They're as common as fire hydrants in some parts of town: small residential buildings typically built in backyards as a kind of annex to the m…

Too ostentatious and pricey. I don't need a palace with taxes to match.

At those price points, I sure hope these homes come with great air filtration systems. The air isn't going to get much better in the Kern County Basin & the nice big houses might attract people who can afford to live in them....but I bet they won't stay very long once they realize how their health is affected by the toxins in the air!