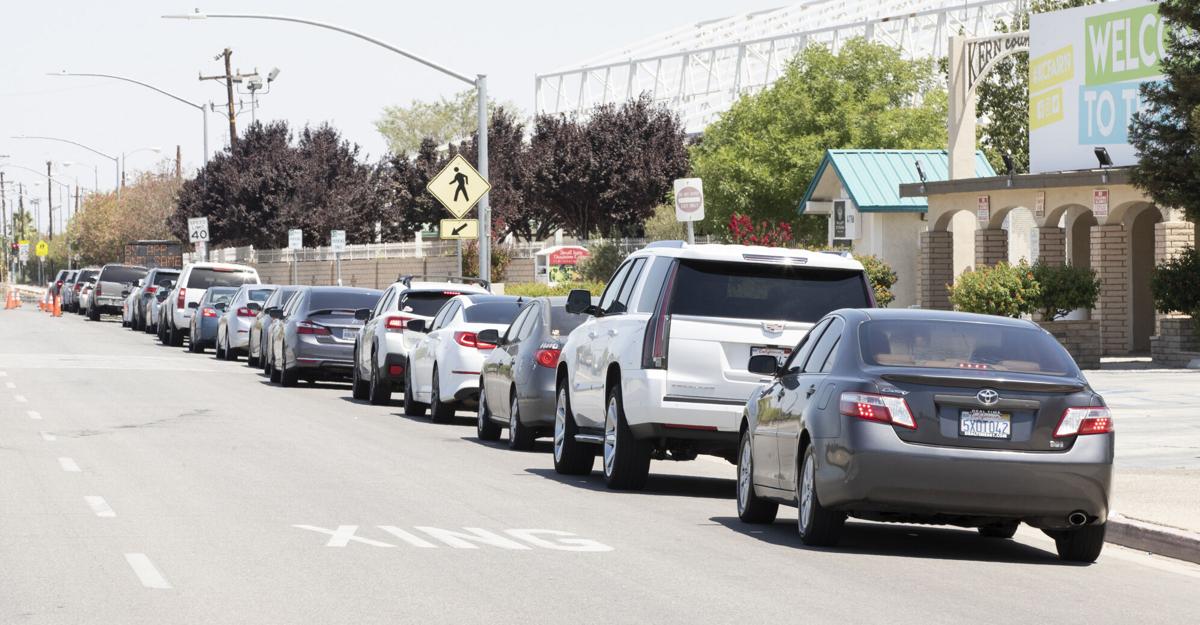 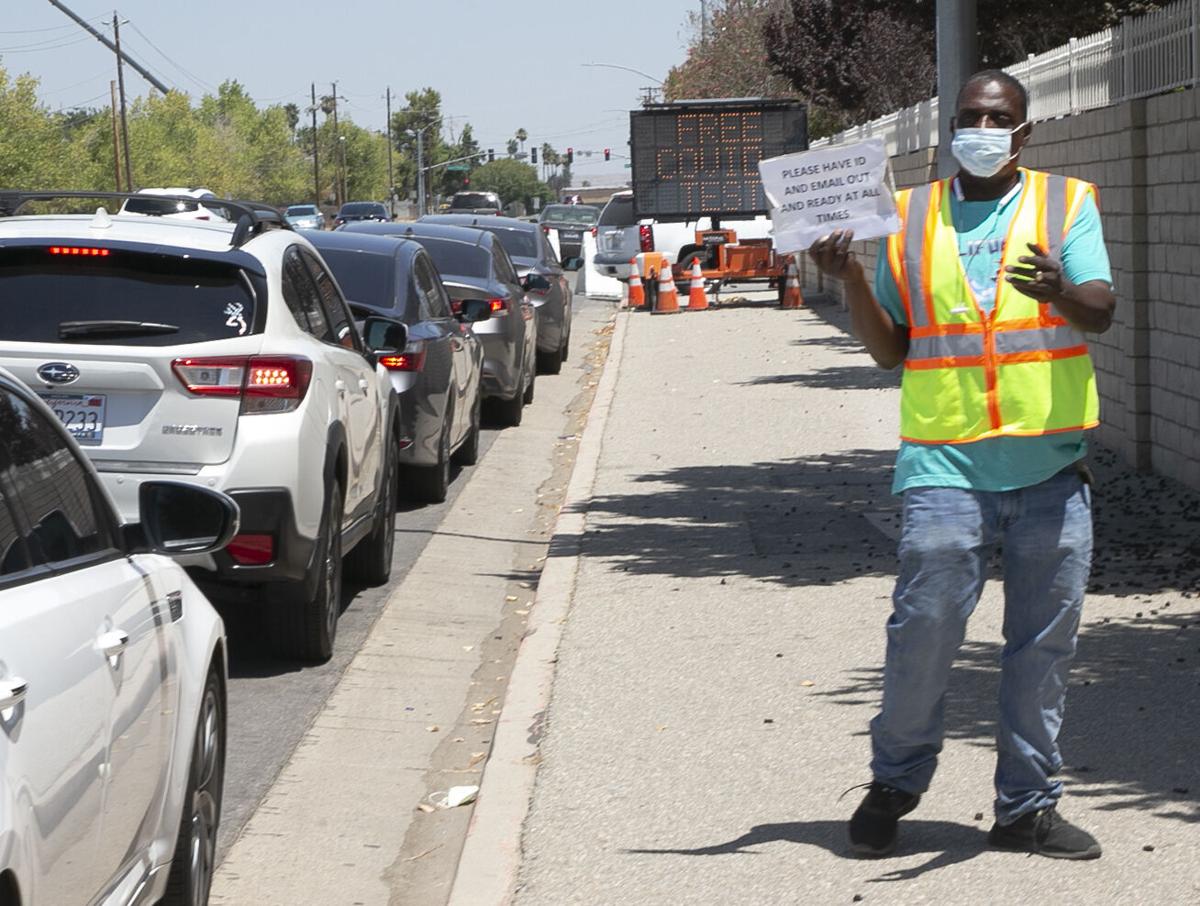 Cars wait to go through a drive-through COVID-19 test site around noon Wednesday. The site provides free testing for anyone, even those with no symptoms. 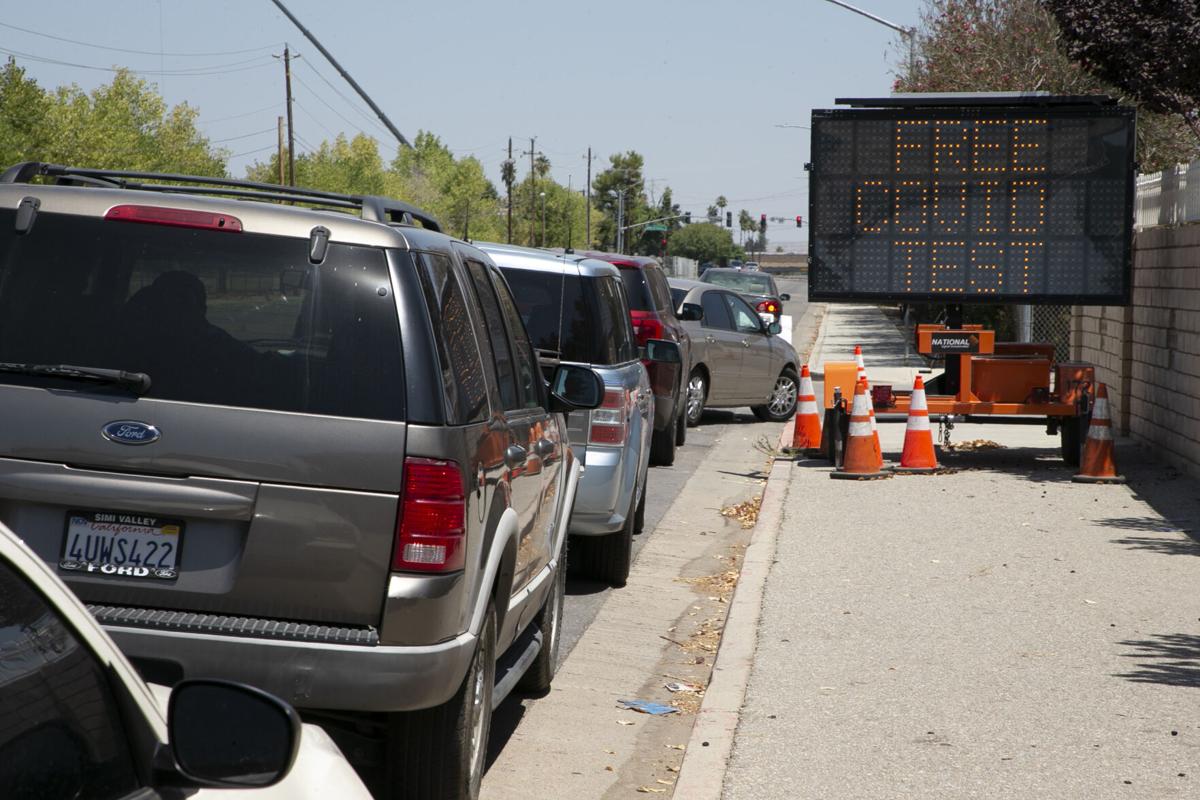 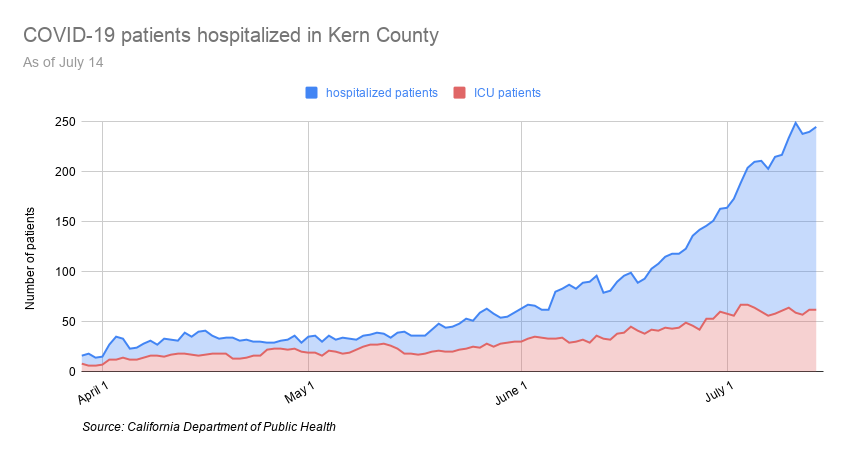 Cars wait to go through a drive-through COVID-19 test site around noon Wednesday. The site provides free testing for anyone, even those with no symptoms.

Ridgecrest Regional Hospital will be ending its drive-through coronavirus testing in a matter of days.

Not because it's no longer needed. As cases soar in Kern County, including in Ridgecrest, demand for testing is higher than ever.

"We are critically short of testing supplies," said the hospital's CEO, Jim Suver, and the next shipment of test kits won't arrive until Aug. 10.

"I have to make sure there are test kits for people who are critically ill," he said, meaning hospitalized patients and those coming into the ER and clinics.

With more people sick and seeking testing, supplies are starting to run short, prompting state health officials on Tuesday to modify testing guidelines to prioritize those who need them most. As a result, it could become much harder to get a test.

It was unclear late Wednesday if the new testing guidelines would impact the 11 state- and county-funded test sites around the county, which have offered free testing to anyone, including those without symptoms.

"We are currently reviewing this new guidance," said Michelle Corson, spokeswoman for the Kern County Public Health Services Department. "The (state) has introduced a four tier priority approach to testing with an emphasis on prioritizing hospitalized patients and people linked to outbreaks."

Supervisor Leticia Perez, whose office partnered with the state to establish one of those sites, a drive-through at the Kern County Fairgrounds, said Wednesday that location would continue to offer free testing to anyone.

"We believe that any person in Kern County that feels the urgency to get tested for COVID-19 should have the access to do so," she said. "Residents may continue to register online and receive a test regardless of symptoms or employment classification."

Some private sites still offer testing for anyone. Rite-Aid announced Wednesday a fifth store locally that will do free testing through its pharmacy drive-through, even for those without symptoms. And many independent urgent cares continue to offer the test, as well.

Dr. Hemmal Kothary, chief medical officer for Dignity Health's Central California division, said supplies of the test for its three local hospitals remain the same but demand has gone through the roof and resulted in the crunch.

Bakersfield Memorial, Mercy Downtown and Mercy Southwest can each process about four to five dozen tests a day, and whatever they can't do is being shipped by courier daily to a sister hospital in Stockton. But a new machine that can process 200 tests a day is expected soon, Kothary said. Dignity Health is also creating a central lab in Phoenix that should be able to process 10,000 tests daily once it's up and running.

"We’re trying to do as much as we can with what we have," Kothary said.

Kaiser Permanente said in a statement Wednesday that it's able to test all members who are symptomatic for the virus and many who are asymptomatic but that depending on local conditions, the provider may prioritize those at highest risk.

"Kaiser Permanente members who do not meet our current testing criteria may choose to receive a test at a licensed, independent facility and we will provide reimbursement for the cost of the test," the company said.

Demand for tests is spiking at Omni Family Health's testing sites, said Grace Tidwell, an associate medical director who's led the organization's coronavirus response. Its test sites are now booking four people for each 15-minute time slot whereas previously they booked one person per slot.

At Omni, a test is only given after a telehealth consultation with a provider, Tidwell said, and generally those without symptoms who haven't had a known exposure or have other high-risk situations may not be given one.

Appointments in general are way up for Omni. Tidwell attributes the influx to the virus and patients who don't want to put off regular care any longer. She also believes individuals who have lost jobs and their employer-based health insurance are likely now turning to Omni for care.

"We’re a safety net clinic," Tidwell said, "and we treat patients whether they have insurance or not."