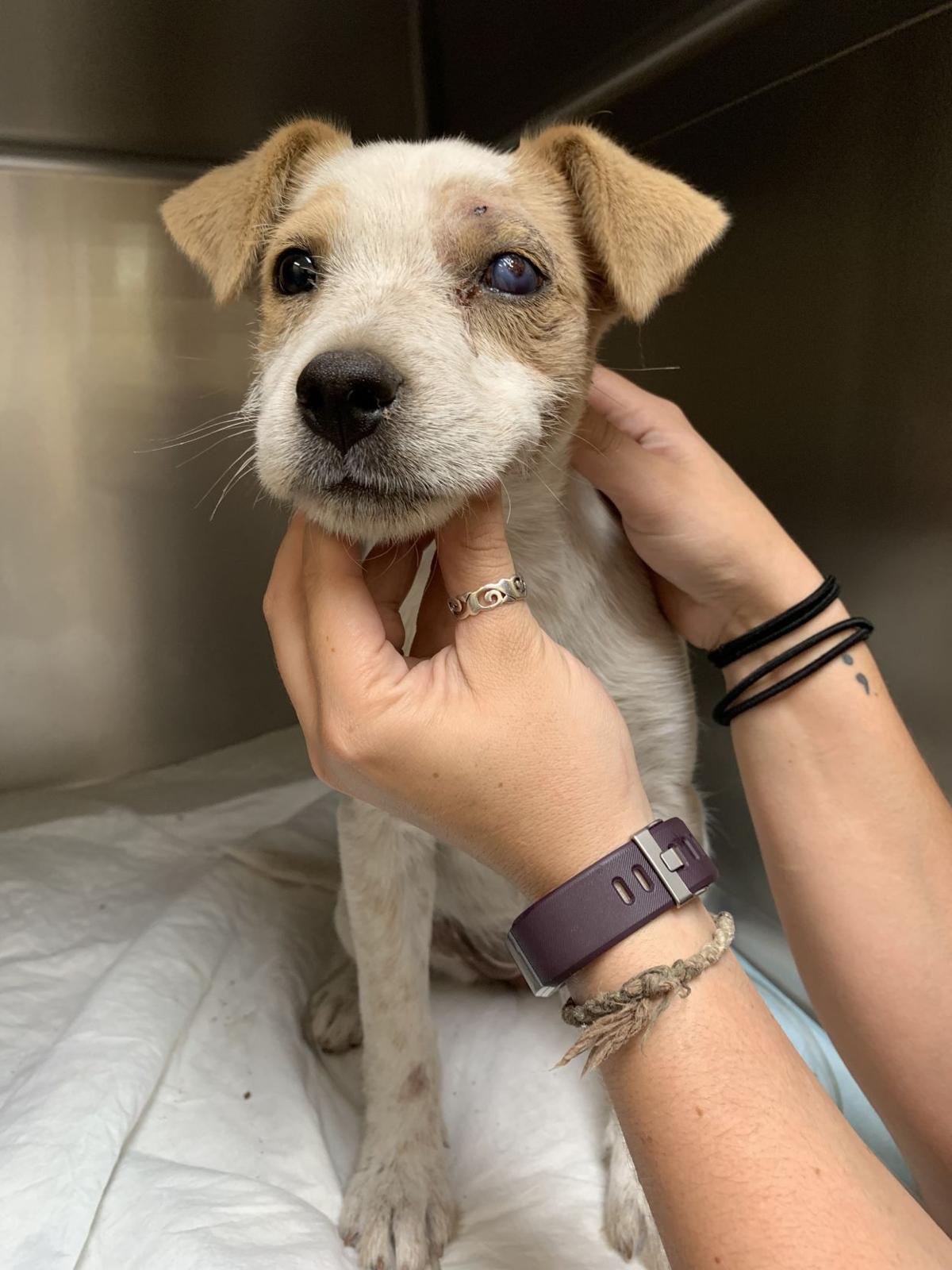 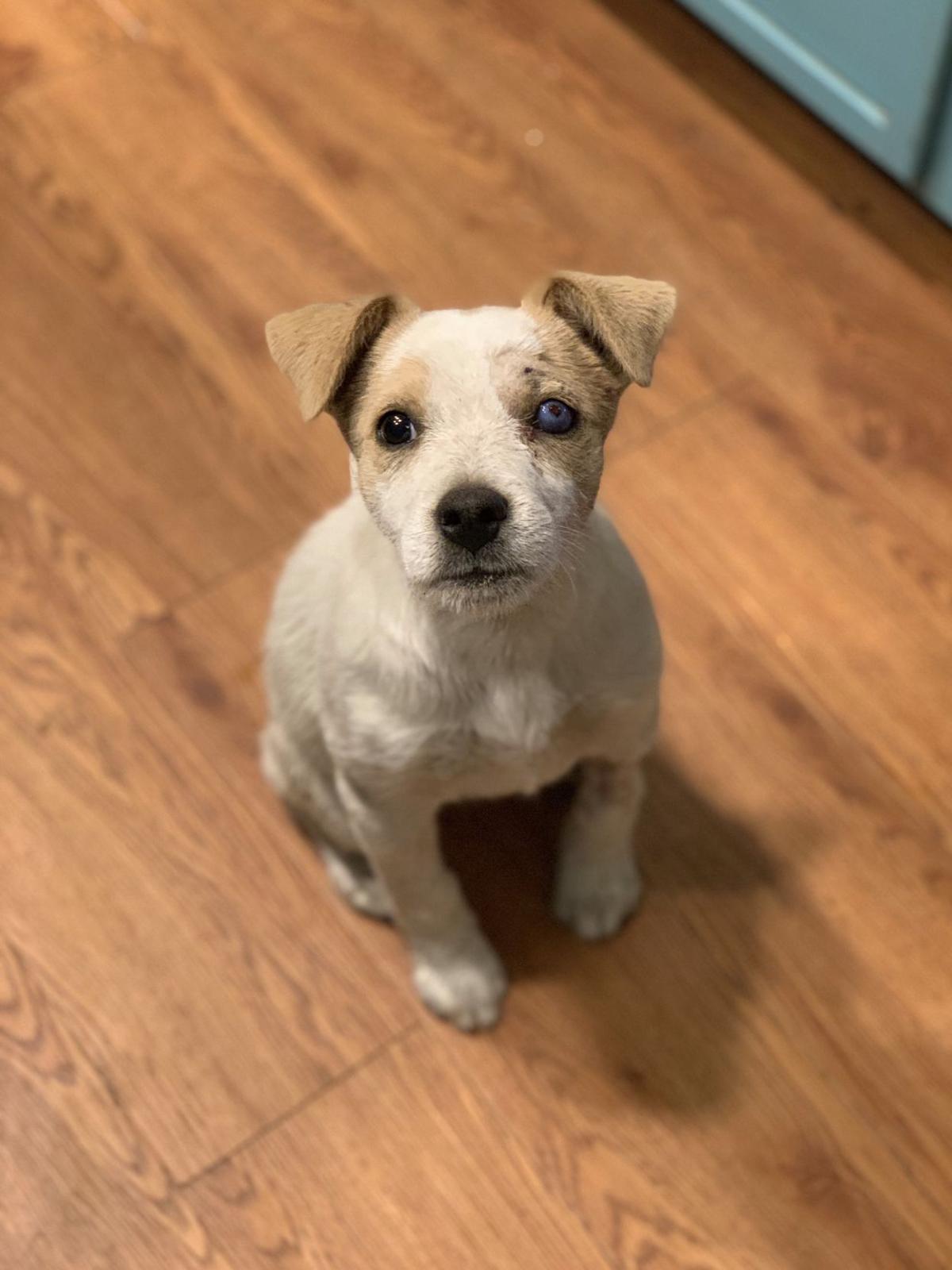 Alejandra Guardado was at her house on Pacific Street in East Bakersfield on Wednesday night when she heard gunshots outside.

Guardado ran outside and said she saw three teenagers laughing and running away from the area. She then heard what sounded like crying underneath her car. When she looked down, Guardado found a puppy that appeared to have been shot in the head but was still alive.

“There was a lot of blood. I was freaked out and didn’t know what to do at first,” she said. “I was in shock about the whole thing.”

Guardado contacted a volunteer she knew with Pet Matchmaker Rescue, who came out and got the dog to a veterinarian with the Bakersfield Veterinary Hospital for treatment at around 11 p.m.

When the dog was brought in, Pet Matchmaker Director Morgan Sokolow Gall found that she had been shot twice in the head with a buckshot and once in the abdomen. One of the shots went through her left eye, Gall said.

“It was terrible. The fact that any teenager could do this to a puppy astounds me,” she said. “This wasn’t self-defense — it was purely evil. It was a malicious act that these teenagers were doing.”

Gall said the hospital put the dog — a cattle dog puppy named Oakley — on several medications and fluids while vets took x-rays of her body, assessed the damage and cleaned the wounds. As it happens, both bullets in her head barely missed her brain.

“She was super lucky. It’s total dumb luck that this dog isn’t dead,” Gall said. “This is our miracle dog.”

Another bullet was found in the dog’s abdomen, but Gall said there didn’t appear to be an entry wound and it may have been from a previous shooting.

While Gall said the hospital decided not to remove the bullets — it would cause more damage taking them out than leaving them in — Oakley will need to have her left eye removed. The surgery has been set for May 24, but Gall said she hopes it could happen sooner.

Gall posted information about Oakley on social media Wednesday night, asking for donations to help pay for medical bills. As of Friday, nearly $4,000 had been donated. Gall said it’s not clear how much all of the treatment will cost.

“When you remove an eye, there can be potential post-op problems, such as swelling,” she said.

Gall said Oakley has healed well from treatment and is alert, active and not showing any signs of significant trauma. She is currently in foster care until it’s time for the surgery.

“It’s just mind-boggling that this dog is in the condition she is in today,” Gall said. “I’ve been doing rescues for 13 years, and I’ve never seen a dog come back from such a horrible situation and be this normal. She’s not traumatized from it.”

Gall said Oakley has been acting like a regular puppy and has reacted well to kids and other dogs.

“She’s so intelligent and loving,” she said. “Given her circumstances, the fact she’s acting like a regular puppy is amazing.”

Guardado filed a complaint with the Bakersfield Police Department in the case. However, Gall said she’s not hopeful that the department will be able to track the teenagers down.

“They couldn’t really make a case of anything, because (Guardado) didn’t see their faces,” she said. “Unfortunately she can’t pick someone out of a lineup. There’s not enough evidence to create a case to arrest someone, which really sucks.”

Instead, Gall said she hopes that once what happened to Oakley spreads through the news media and word of mouth, someone who knows who was responsible for the shooting will come forward.

“It doesn’t appear that this is the first time they’ve hurt an animal, and it and won’t be the last,” she said. “It’s scary to know kids are running around doing this for fun. Who knows what or who may be the next target?”

If you would like to donate to help with Oakley’s medical bills, go to @pmmrescue on Venmo or send a donation via Zelle or PayPal to petmatchmakerca@gmail.com. Checks can also be sent to PMMR, P.O. Box 21406, Bakersfield, 93390.

Puppy shot in the head recovering well from eye-removal surgery

A cattle dog puppy that had been found shot in the head twice with buckshot earlier this month is doing well after getting her eye removed last week.