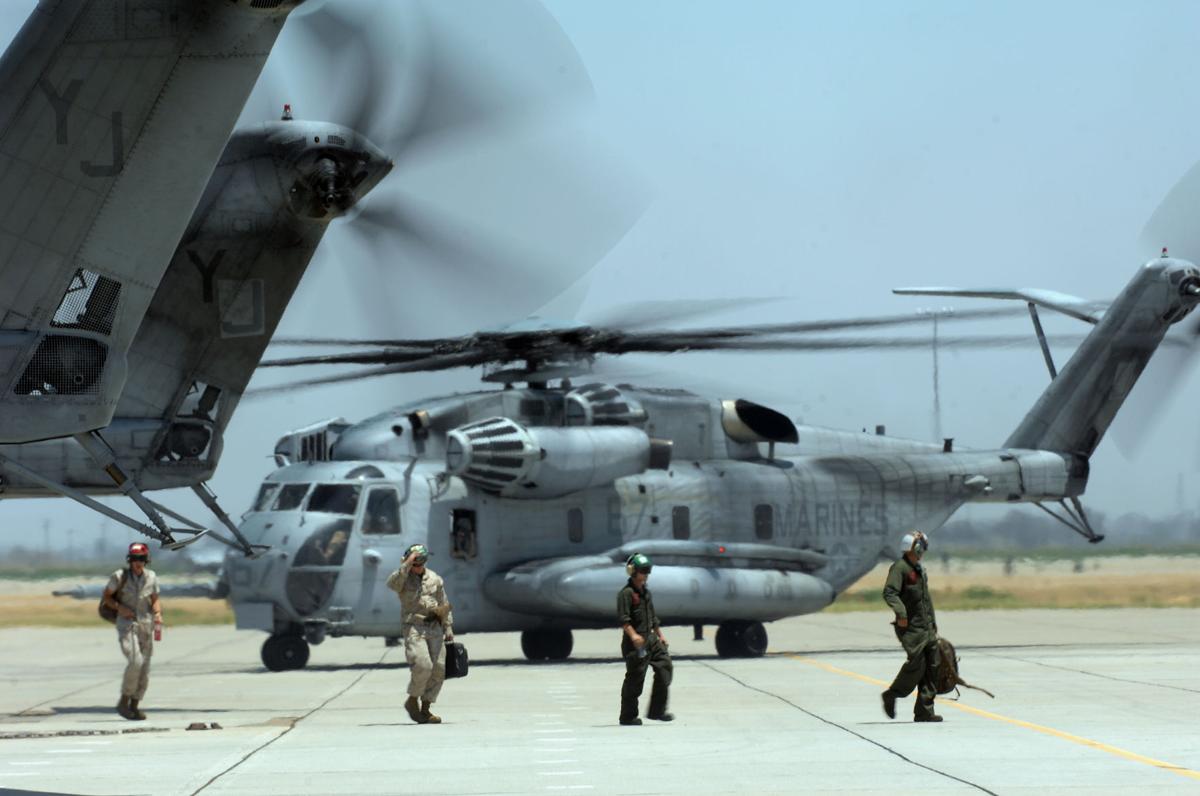 Naval Air Station Lemoore is home to a total population of roughly 13,000 sailors and their dependents, and occasionally serves as a temporary base for other service members — like these Marines operating out of Lemoore while fighting wildfires in 2008. 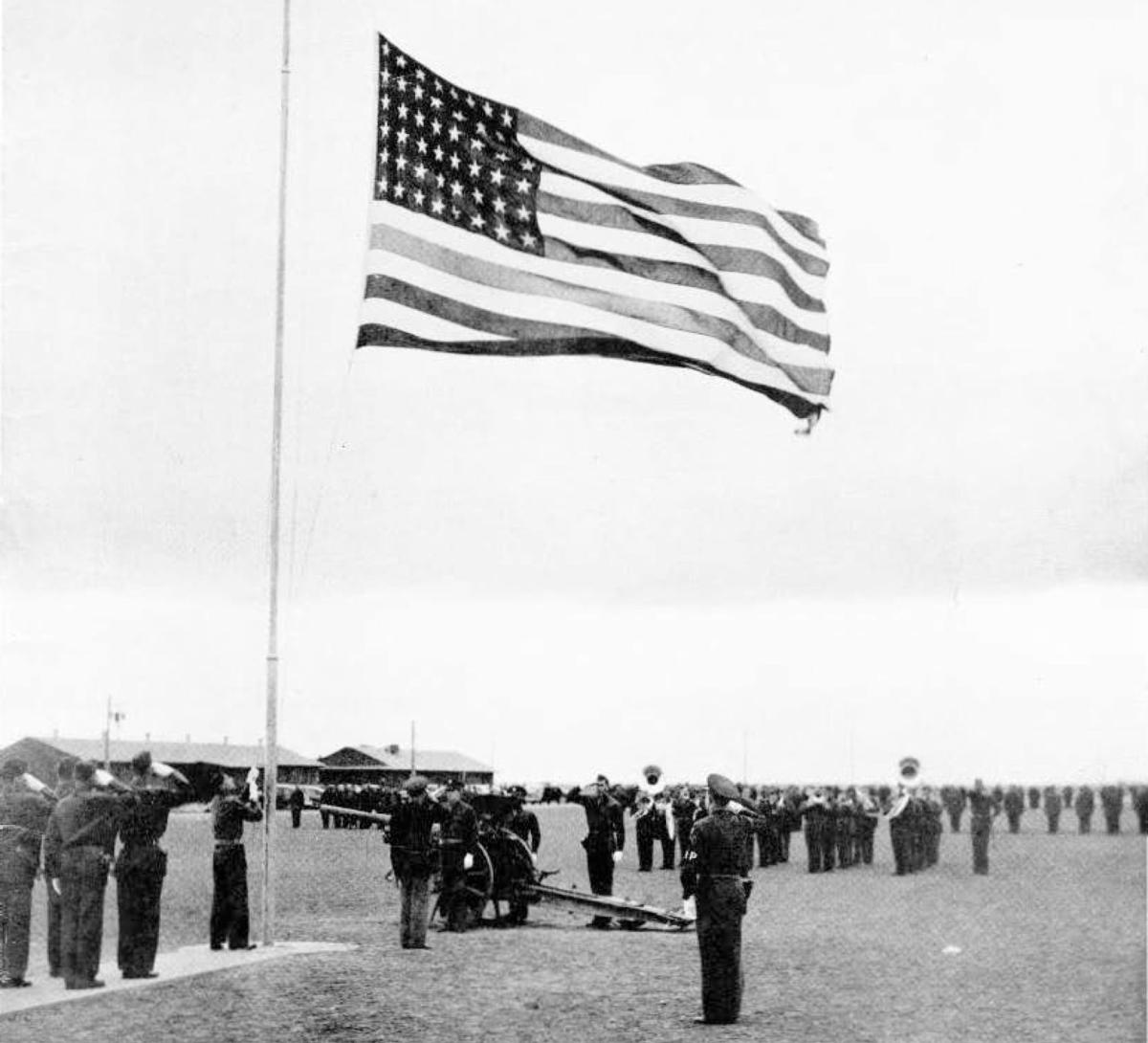 Lemoore Army Air Field was one of four military installations in the San Joaquin Valley to become the site of intensive valley fever research during World War II. 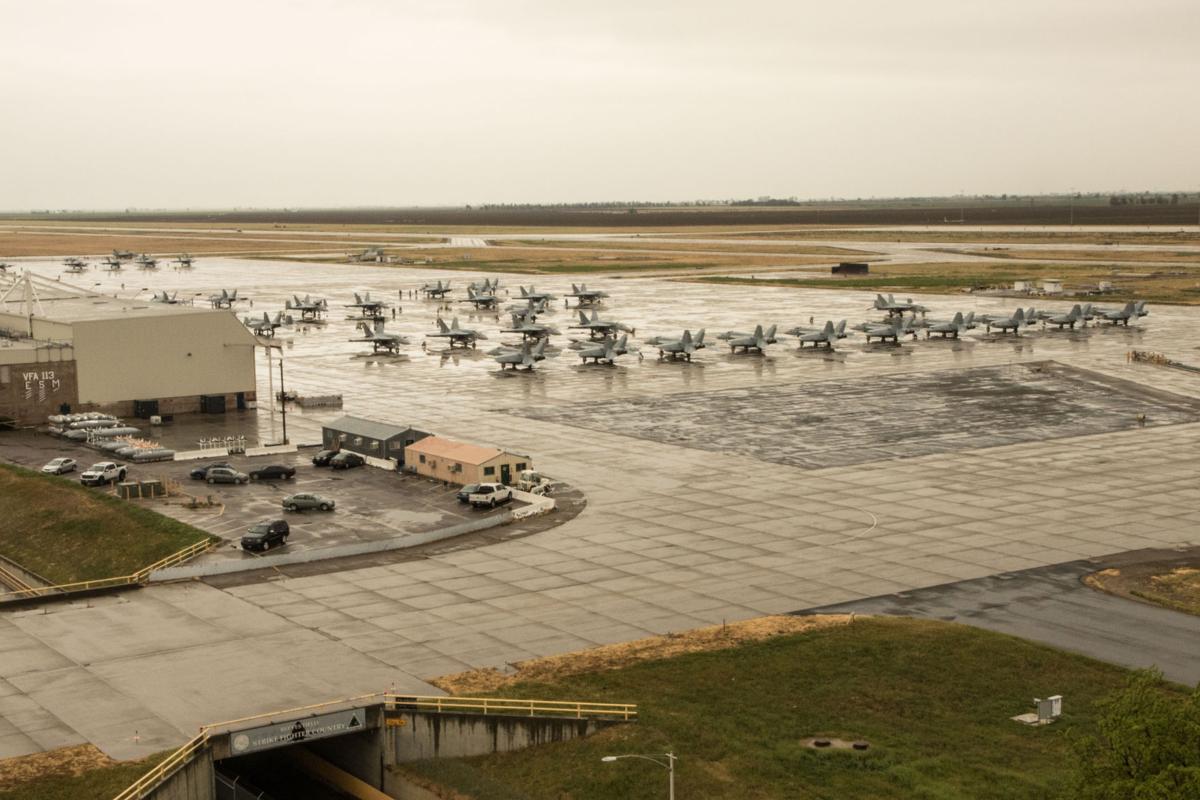 Today, Naval Air Station Lemoore is the Navy’s largest jet fighter base in the country. 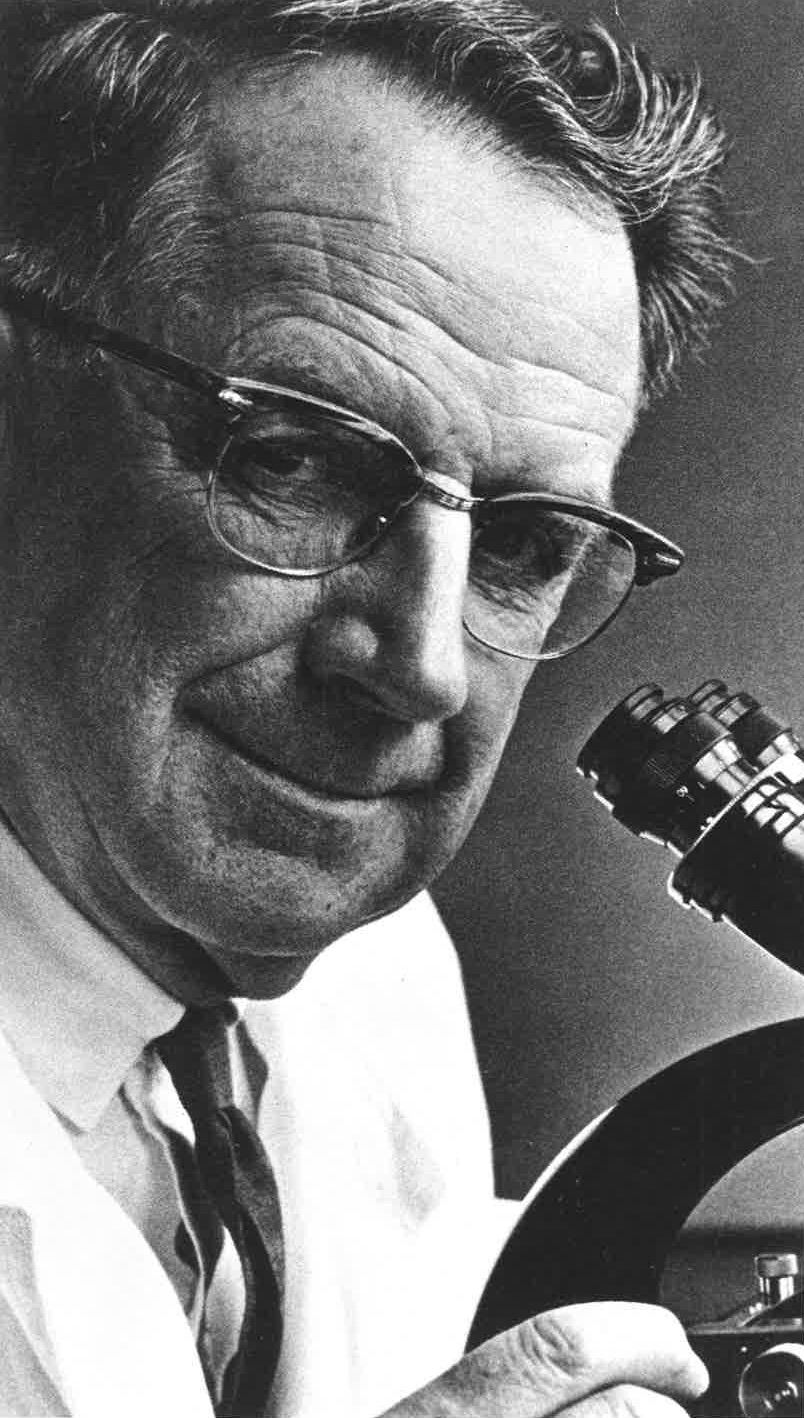 Naval Air Station Lemoore is home to a total population of roughly 13,000 sailors and their dependents, and occasionally serves as a temporary base for other service members — like these Marines operating out of Lemoore while fighting wildfires in 2008.

Lemoore Army Air Field was one of four military installations in the San Joaquin Valley to become the site of intensive valley fever research during World War II.

Today, Naval Air Station Lemoore is the Navy’s largest jet fighter base in the country.

In the city of Lemoore, a community of 25,000 rising out of arid cropland in the San Joaquin Valley, almost everyone has a story about valley fever.

Take Frank Bernhardt, nursing a beer at the Fleet Reserve bar on the edge of town. He first encountered the disease just after moving here in the 1960s. “Years ago, my youngest daughter had it. She just didn't have no energy,” he said.

“I had a sailor that worked for me that had it,” recalls Kevin Crownover, playing dice across the bar. “He probably missed about a week's worth of work.”

Bernhardt and Crownover share something else in common: They both served at Naval Air Station Lemoore, the Navy’s largest jet base in the country.

Looking out at the airstrips cutting through dusty fields of cotton and corn, it’s no surprise that the naval base, about 100 miles from the ocean, struggles with this desert disease, caused when people breath in spores from a fungus that lives in parched soil. Kings County, where Lemoore is located, ranks consistently among California’s three worst counties for valley fever. From at least 2000 to 2013, Lemoore had the highest number of cases of any military base in the country.

But the air station’s history with valley fever begins much earlier, in the mid-20th century, when military researchers teamed up with a prominent epidemiologist to study disease exposure and patterns of infection. This collaboration resulted in a wealth of data revealing trends that earlier studies had only hinted at — and a legacy of research that still informs how we treat and diagnose the disease today.

“It was very important to us,” said Dr. Demosthenes Pappagianis, associate director of UC Davis’s Coccidioidomycosis Serology Laboratory, which provides testing services related to the disease. “The expansion of knowledge of the disease was very importantly supported by military contributions.”

As the armed forces broadened their presence in the San Joaquin Valley at the start of World War II, military leaders became concerned about valley fever, at that time still a largely mysterious disease. They brought in Dr. Charles Smith, a Stanford physician who had pioneered valley fever research, to help determine the risk of exposure to the disease and its threats to military readiness.

Smith’s collaboration with the military ended after the war, as bases in the valley closed or changed hands. But his findings from that time period still shape our basic understanding of the disease.

Smith had developed the first skin test, which could determine exposure and immunity to the disease — a precursor to the test available in some health centers today, called Spherusol. The military agreed to fund an extensive project with Smith at four bases in the valley, including Lemoore, which at that time belonged to the Army. Beginning in 1941, Smith gave skin tests to every service member when they arrived and periodically throughout their service.

This pool of thousands of research subjects allowed Smith to confirm with greater certainty what he had uncovered in earlier, smaller studies in Tulare and Kern counties. First, the infection rates were high. At one prisoner-of-war camp in Kern County, Smith found that as many as 10 percent of the prisoners were hospitalized with the disease. Second, he found that blacks and Filipinos are particularly vulnerable. Third, the majority of people with the fungal spores in their system never actually develop symptoms of valley fever, and that it is possible to build up immunity over time.

“When the war came along,” said Pappagianis, who worked alongside Smith in the 1950s and 1960s, “the movement of people into the state including the military personnel certainly gave a bigger number of cases that could be analyzed as to various aspects about the incidence and about the varieties of infections that are represented by valley fever.”

By linking infection rates to the geographic origins of service members and prisoners of war, Smith also created the most accurate maps of areas where the fungus causing valley fever is found — the same ones we relied upon until recently, when the spores that cause valley fever began being detected in regions beyond the desert southwest.

It was also during the war, said Pappagianis, that Smith and his military colleagues determined that valley fever cases spiked when a drought was followed by heavy rains.

“The military has been crucial in all of this,” said Sandra Larson, former director of the nonprofit Valley Fever Americas and unofficial valley fever historian. “Their interests brought it to national attention, and that's something that we're still working on today.”

Since then, the military’s involvement in valley fever research has waxed and waned. It peaked with work on vaccine development in the 1980s, which ultimately stalled. Earlier this year, the Navy was awarded a small grant for a blood serum study to understand rates of exposure to the disease.

The military made some of the earliest discoveries in how to control the dust that carries the spores into people’s lungs. Military research demonstrated that landscaping, pavement and dust stabilizers can reduce exposure to the disease. Since World War II, valley fever incidence throughout the military has dropped by an order of magnitude, from over 10 cases per 100,000 service members to less than three.

Much of that improvement stems from dust control, said Dr. John Galgiani, executive director of the Valley Fever Center for Excellence. In addition to the steps the military itself took, Galgiani credited the gradual shift from wide open, rural spaces to more paved-over and built-up urban areas. The math is simple: less dirt means less dust. “Urbanization has had a big effect on the reduction in annual case rates,” he said.

Over a 14-year period from 2000 to 2013, Naval Air Station Lemoore reported 62 cases of the disease. It’s not an enormous number, but it’s still the highest reported by any U.S. military installation during that time period. “Lemoore is really the military’s epicenter of valley fever,” said Dr. Ryan Maves, an infectious disease expert at Naval Medical Center San Diego.

The Navy has not made base-specific data available since 2013, but a doctor at Lemoore claims their case rate today is similar to that seen in surrounding Kings County — meaning they could see anywhere from a small handful to a few dozen cases per year.

Military officials don’t seem alarmed by those numbers. “There’s only so much dust reduction one can do on a base with supersonic jets taking off from it,” said Maves.

That’s why at Lemoore, the focus is instead on education and outreach. Every health care provider on base is required to take coursework in recognizing and treating valley fever. This is not standard among health systems outside of the military but public health experts say it is a model worth emulating with the potential to significantly reduce the disease’s toll. In addition, all sailors have to sit through a mandatory lecture on the disease.

“There's no instruction saying that we have to do this,” said Dr. Francis Hall, director of public health on the base. “We just think it's in the best interest of our population, given the fact that the bulk of them are not from this area.”

Other institutions do take pointed preventive measures. For instance, the California state prison system has seen huge drops in valley fever cases since it began relocating inmates out of the valley based on their ethnicity and skin test results.

Hall said measures like that just aren’t practical in the Navy. On the other hand, he said, the Navy can take pre-existing health conditions into account when choosing where to station sailors. And at Lemoore specifically, some protective measures are built into the job. “Much of the work done at this base is around aircraft because this is the F-18 base,” he said, “and when people work around the aircraft they typically wear respirators.”

Sailors also receive regular medical care and do most of their exercising indoors, largely out of the reach of dust.

Sandra Larson appreciates how important the military was to early disease research, but she wishes its role today was greater. “Maybe until the surgeon general himself gets the disease there won't be that much interest,” she said, “but I'm hoping that eventually the military could be interested in helping to fund the cure.”

Kerry Klein reports for Valley Public Radio in Fresno and is a member of The Center for Health Journalism Collaborative.