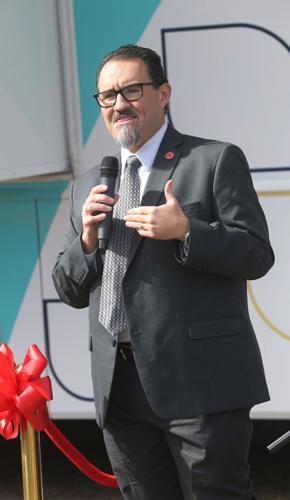 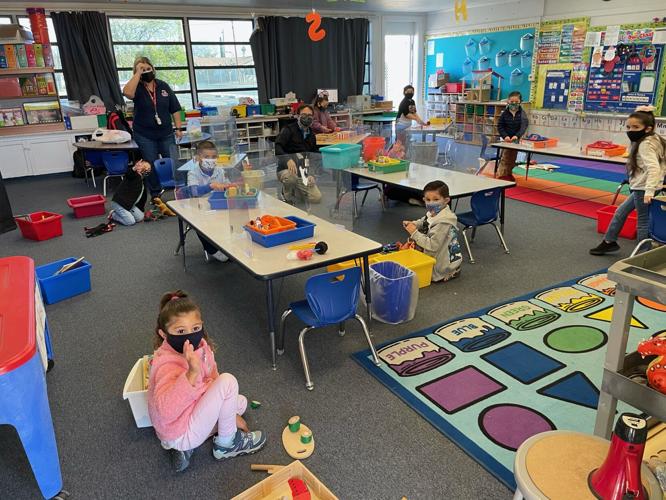 This March 2021 photo shows McFarland Unified School District students back in the classroom after a long hiatus due to COVID-19. The pandemic brought a number of challenges that were particularly profound for the working class community north of Bakersfield.

This March 2021 photo shows McFarland Unified School District students back in the classroom after a long hiatus due to COVID-19. The pandemic brought a number of challenges that were particularly profound for the working class community north of Bakersfield.

When McFarland Unified Superintendent Aaron Resendez heard that Gov. Gavin Newsom was planning to spend hundreds of millions in grants to expand his vision for “community schools,” he made the district’s grant application process an all-hands-on-deck top priority.

Resendez said he already had plans to gradually expand the school's resources over the next three to five years to help students in the rural communities the district serves.

And MUSD — a district where approximately 90 percent of the student population receives free or reduced-price lunch — represents an area where Newsom’s goal to “reimagine education in this country” has a huge potential for impact.

Still, when the announcement came out recently that McFarland Unified would receive $7.25 million from the most recent round of $635 million in community schools grants from the state, Resendez said he could hardly believe it.

“We actually already had plans to do this, but really on a much smaller scale,” Resendez said, referring to plans to improve outreach for students and families, “just because it would have had to be funded through some of our specialized funding.

“When the community schools grant funding came out, and we realized the scope and the nature of it, it really allowed us to get where we wanted to be in four, five or six years — it allowed us to get there in six months.”

Pending the MUSD governing board’s approval of some moves that Resendez is already working on with staff, students are likely to see and experience some of these changes when they return to campus in the fall.

The grant application that schools used to apply for the money describes the concept of “Community Schools” as “a strategy for organizing a wide variety of community resources around student success. The extended hours, services and relationships inherent in the Community School concept re-envision education as a coordinated, child-centered effort in which schools, families and communities work together to support the educational success of students, while strengthening families and communities at the same time.”

What that means, Newsom said during a media Zoom call Monday with members of the State Board of Education, Superintendent Tony Thurmond and members of the California Teachers Association, is “not just (transitional kindergarten) for all, after-school (programs) and summer school for all.”

Calling it transformative change, it also represents a potentially major expansion of the role of public schools, particularly in underserved communities, where the resources are most needed, he added.

The idea is for the state to provide the money, and for districts to determine the best ways to spend it based on their own needs, Newsom said.

In a community like McFarland, which has a little over 3,400 students, the millions on the table will help in a number of ways, said Juan Carrasco, who leads special education and student support services for the district.

In working class McFarland, which recently discussed whether it would need to turn its library — an important source of after-school programming — into a police station due to need and financial constraints, support services like the ones Newsom is looking to expand are critical but in short supply.

“It is transforming schools,” Resendez said, “I think, especially rural schools, in a community like McFarland, the largest public service agency is the school.”

For a lot of the services families need, parents and their children rely heavily on Kern County, which can often mean a trip to Bakersfield, he said, which can be a big challenge for single-parent households or those where both parents work full-time or more.

“If we can bring the services to the school and avoid the circumstances where a kid has to miss an entire school day because of an appointment in Bakersfield, because we brought the services to (for example) Kern Avenue Elementary School,” Resendez explained, “and a parent can arrive, a student can be called out of class, they can have their tele-appointment or they can get screened on site and then get right back into class — I think that’s a win all the way around.”

Right now, for example, the district has a single school nurse who travels to all four sites, and students who have health issues that need regular management, such as diabetes, can take up a significant portion of her time.

However, the funds will allow the district to add a dedicated nurse at each site, as well as a position to help parents coordinate health services for their child.

For Carrasco, whose background is in mental health, one of the more exciting additions for the community schools grant money is how the offering of those services will be improved and more accessible for parents.

“Next year, we’ll have school psychologists, for example, also at every site, so that's another person that can help kind of within the linking and consultation of services that are available throughout the community,” he said.

“Oftentimes, we would have families come in and, you know, inquire about services that typically or historically have not been offered by the school district,” Carrasco added. “And I think that this community schools grant allows us that opportunity to build those partnerships, and potentially bring in many of the services that our families and our students are really in dire need of.”