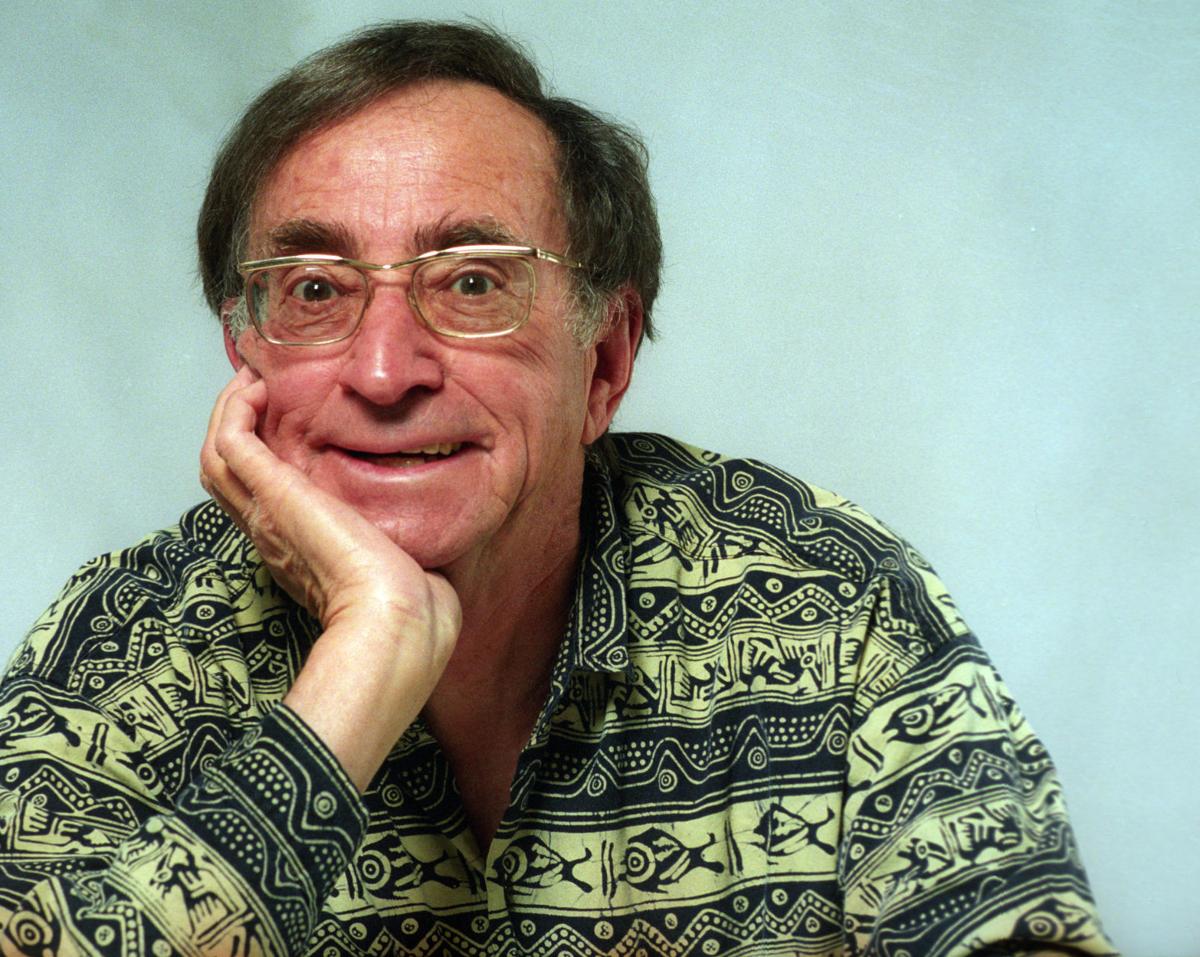 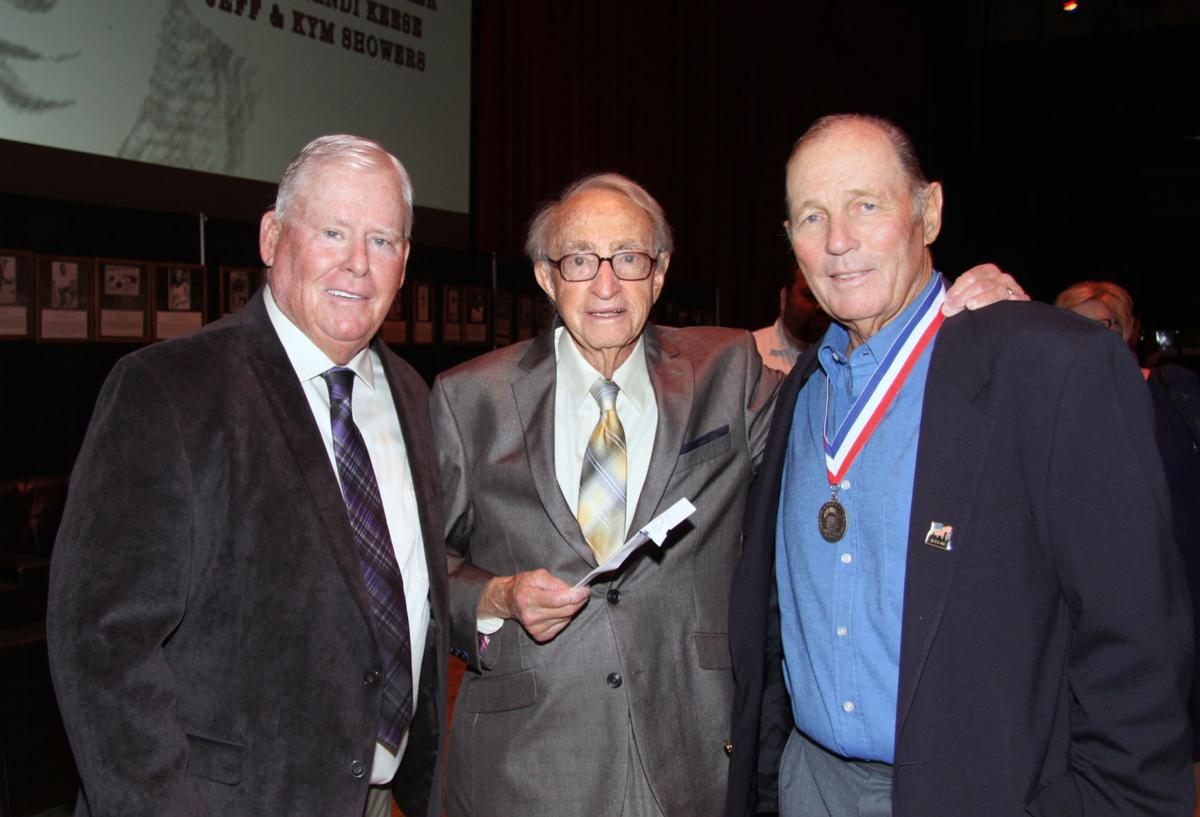 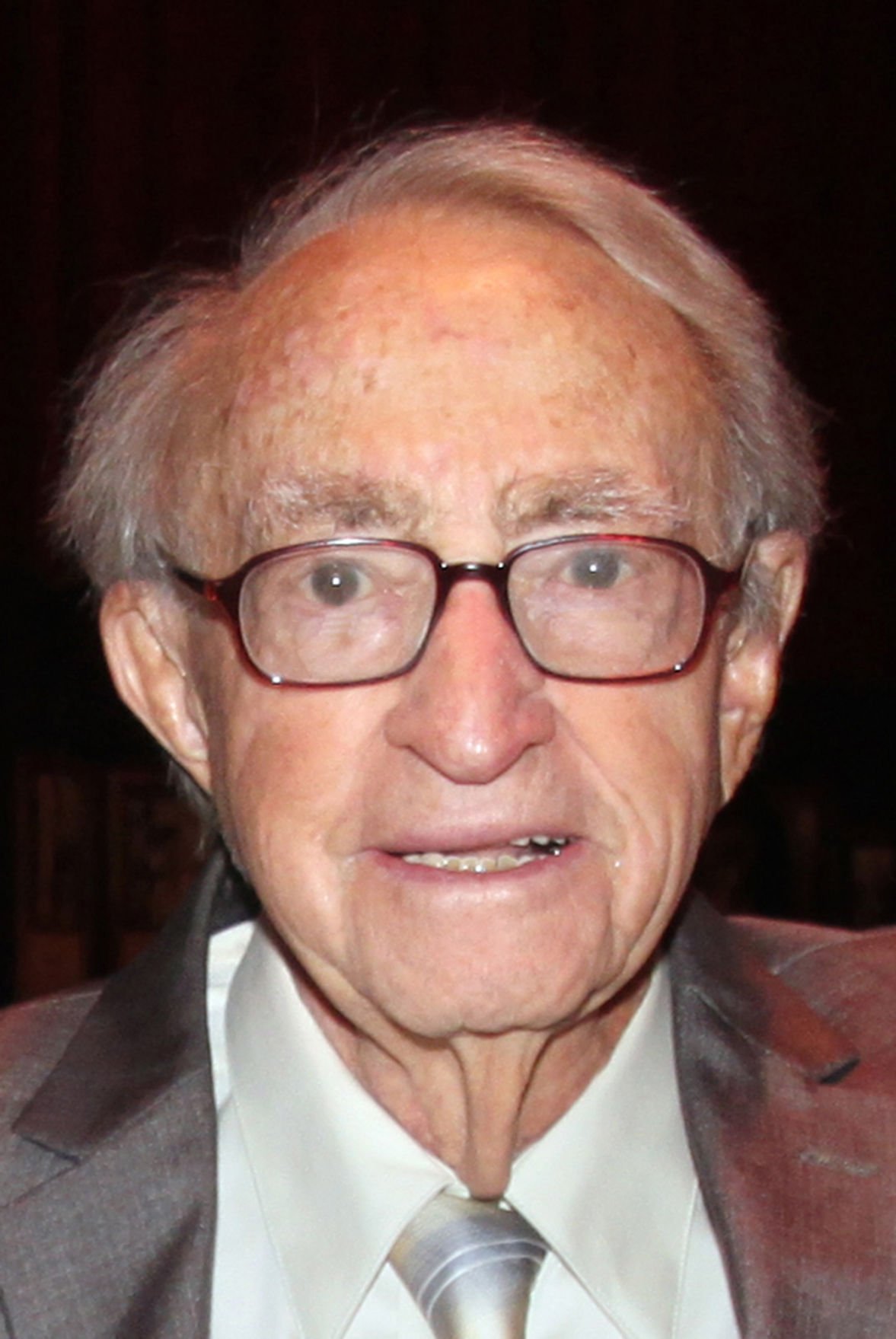 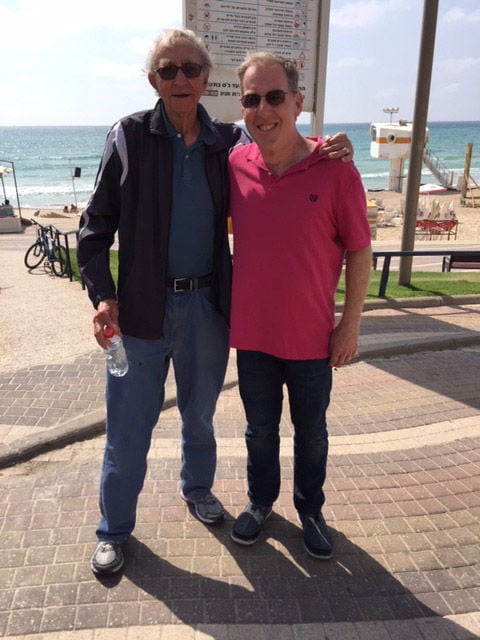 When Jim Braun, right, covered professional and college football at The Californian during the 1980s and early 1990s, he often teamed up with longtime Californian sports columnist Larry Press. The former colleagues and good friends met in Herzliya, Israel, in 2015. 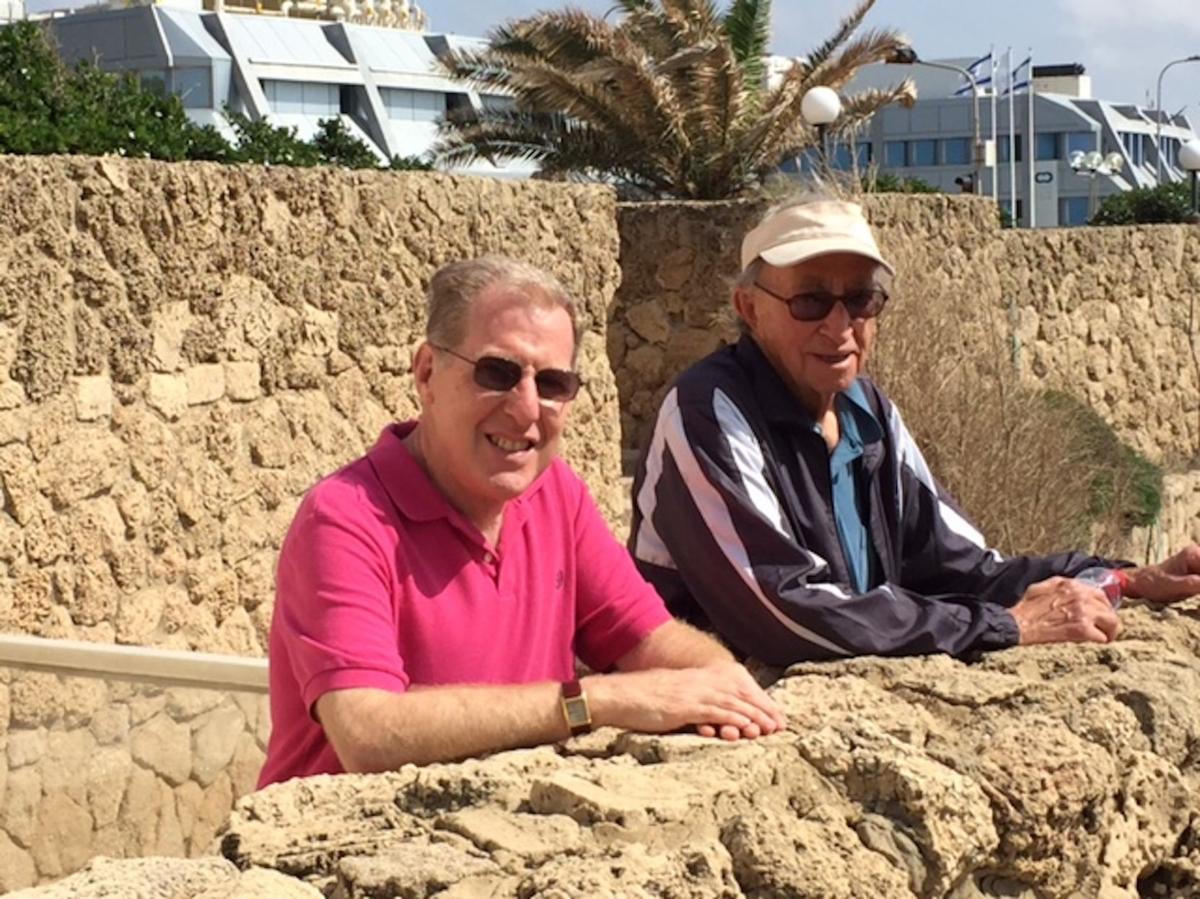 Jim Braun and Larry Press, who worked together in The Californian's sports department for years traveled to Israel separately in 2015 but made a point to meet up and share a meal together.

When Jim Braun, right, covered professional and college football at The Californian during the 1980s and early 1990s, he often teamed up with longtime Californian sports columnist Larry Press. The former colleagues and good friends met in Herzliya, Israel, in 2015.

Jim Braun and Larry Press, who worked together in The Californian's sports department for years traveled to Israel separately in 2015 but made a point to meet up and share a meal together.

In a journalism career that spanned five decades and included coverage of Super Bowls, the World Series, Indy 500 and the ’84 Olympic Games, just to name a few, Larry Press always kept at least one eye on his adopted hometown — Bakersfield.

That was true even when the beloved sports editor and writer, perhaps best known for his “In the Press Box” columns, retired from The Bakersfield Californian and moved to Ventura several years ago.

Gone, but not forgotten.

The same can now be said for Press, who died Thursday morning at his home in Ventura. He was 93.

“He’s just a remarkable, remarkable human being,” said Lucy Dillon, his stepdaughter. “And everyone will tell you that. He was just absolutely a one-in-a-million person. We’ve been with him our whole lives and there was not a day that I did not feel loved by him.”

Born in New York City on Dec. 7, 1926, Press earned a bachelor’s degree in journalism from Ohio University. He started his career in journalism in Casper, Wyo., before taking a job at The Californian in 1953, passing on job offers at the Washington Post and San Francisco Chronicle because he “liked Bakersfield.”

Turned out to be the start of a 42-year career of writing and overseeing coverage on national and local issues that continued even after he “officially” retired in 1995. His decision to move to Bakersfield also resulted in a 45-year relationship with his wife, Bona, and her two children, Lucy and Steven.

“My parents have been together since we were young,” Lucy said. “They met at The Californian and they dated for 20 years before they got married. We grew up with him. They didn’t get married until we were both grown, but he has always been the rock of our family. And he has been beside us always for as long as Steve and I can remember. He took us to sporting events, he attended soccer games that I played ...

“I was a stringer for The Californian when I was in high school and he would coach me on taking stats ... My senior year in high school we had the first varsity women’s soccer team. I was a big soccer player and I really wanted to play for the team, but it conflicted at the time with covering things for The Californian. So I left the paper and I am so worried about making that decision ... I didn’t want to disappoint him, but he’s such a mentor to me. I mean, I had a full career in newspaper journalism myself and there was no better teacher, no better mentor, no better model for me.”

Press also made several lifelong friendships with his co-workers.

“He was more than just a colleague, he was a good friend and we kept up our friendship right up to the end,” said Jim Braun, who started at The Californian in 1982 and covered four Super Bowls with Press during their overlapping careers. “Even after he left The Californian, my wife and I would visit him in Ventura at least twice a year.”

Braun and his wife, Pam, were visiting Israel and met Press and his family there in 2015. The two wrote about their experiences in a series of articles in The Californian when they returned.

In recent years, Braun says he spoke to Press at least once a month and had just spoken to him Monday.

Their topic? The Super Bowl, among other things.

“He was a sports fan right up to the end. And I told everybody that (even at his age) he was so mentally alert that if someone asked him to write a column on deadline, he could still do so.”

That shouldn’t be any surprise to anyone that knew Press.

Tony Lacava, who was hired by Press as a freelance writer while still a high school senior in 1980, could tell Press was special.

“His knowledge of sports extended to the national and international scene, but the beautiful thing about Larry was he always had a pulse on the local scene, all the way down to youth sports,” said Lacava, who eventually was promoted to sports editor before retiring after a 35-year career in 2015. “He was a huge influence and I respected his allegiance to local sports, and I think the readers did, too.”

Press’ conversational style of writing and attention to detail was a style that helped influence Lacava as Lacava progressed through his journalism career.

“He definitely had a unique writing style,” Lacava said. “If I read 10 columns and none of them had a byline on them, I could pull Larry’s out of there in a heartbeat. He’s very well-versed in the English language and a very intelligent man.

“He’s the one that put the keys in the ignition for me and there I was and he gave me a job, and 30 years later I was still there. That’s how important he was to me. He was a father figure in journalism (to me).”

Others remembered Press’s unique sense of humor, exemplified by the simple way he spelled his last name, “It’s Press with a P like pneumonia,” or by a simple sign on his desk that read "Nosmo King," that when put together spells “No Smoking.” Co-workers started to refer to them as "Pressisms."

“Larry was the sports columnist when I came to The Californian in May 1988 as a sports page designer,” said Robert Price, Californian columnist. “He was old then — can I say that? — but he was the biggest kid in the building. He was able to see the light, funny side of everything. He looked a little like Woody Allen, but his jokes were usually terrible. Still, it was uplifting to be around a guy who never stopped trying to make you smile. Larry was a great journalist, a lovable guy, and a one-of-a-kind character.”

“He was a professional, and if you got to know him, he had a great sense of humor,” said Griffith, who worked at The Californian from 1977 to 2019. “He was low-key and he never seemed to get that flustered. A total pro, who went through a lot of changes. From manual typewriters, electric (typewriters) to the early ages of computers and typesetters ...

“He never wrote any exposes calling out people, but he was hard on people when they deserved it. I think he was fair and a champion for the town and local sports for sure. It was just his whole mannerism from in the office to out dealing with the people, Larry Press was easy to like."

SOUND OFF: 'Pressboxx' was a character for the ages

Reader: I was deeply saddened to learn about Larry Press, The Californian's longtime sports editor and sports columnist, who died this week ("…

Great job by Ron and my former colleagues in capturing the essence of one of Bakersfield’s true treasures. LP taught us all a lot about thinking things through and conveying ideas and facts in a compelling manor. He was a frequent traveling companion of mine on assignments to LA and around the state and he made it fun. How impressiveI it was that he could bang out a column in his precise measurement (19.19 inches) within minutes of the events completion. His wit was hard to match , although over the years it was fun trying to as I was lucky to be his successor as the TBC sports columnist and among those he corresponded with after he left the paper. RIP Pressboxx. Your work, your influence, your contributions and your glorious personality will never be forgotten.

Press was fantastic at keeping his eye on local sports, which is what local journalists should do. Legend.

The Best. Many many fantastic columns. He and Phil Klusman were superstars. RIP

A legendary reporter! One of a kind. Larry will be missed for sure!

Larry Press was a sports legend in Kern County. Not only his reporting of the ever growing sports community in Bakersfield but his ability to maintain contact with the local athletes that moved on. He was the patriarch of the sports media in Kern County. He worked hard to cover it all with fair, unbiased and balanced reporting. Larry knew his facts and was a constant student of the world of sports. A kind person who was a joy to read and to visit with in person. I always enjoyed our conversations through the years as he was more like family than just a sports minded friend. His impact will be felt long after his passing and he will be truly missed by those who appreciated his writing style and presence in our local newspaper. Larry Press was one of the best, truly a good man! He will be missed.