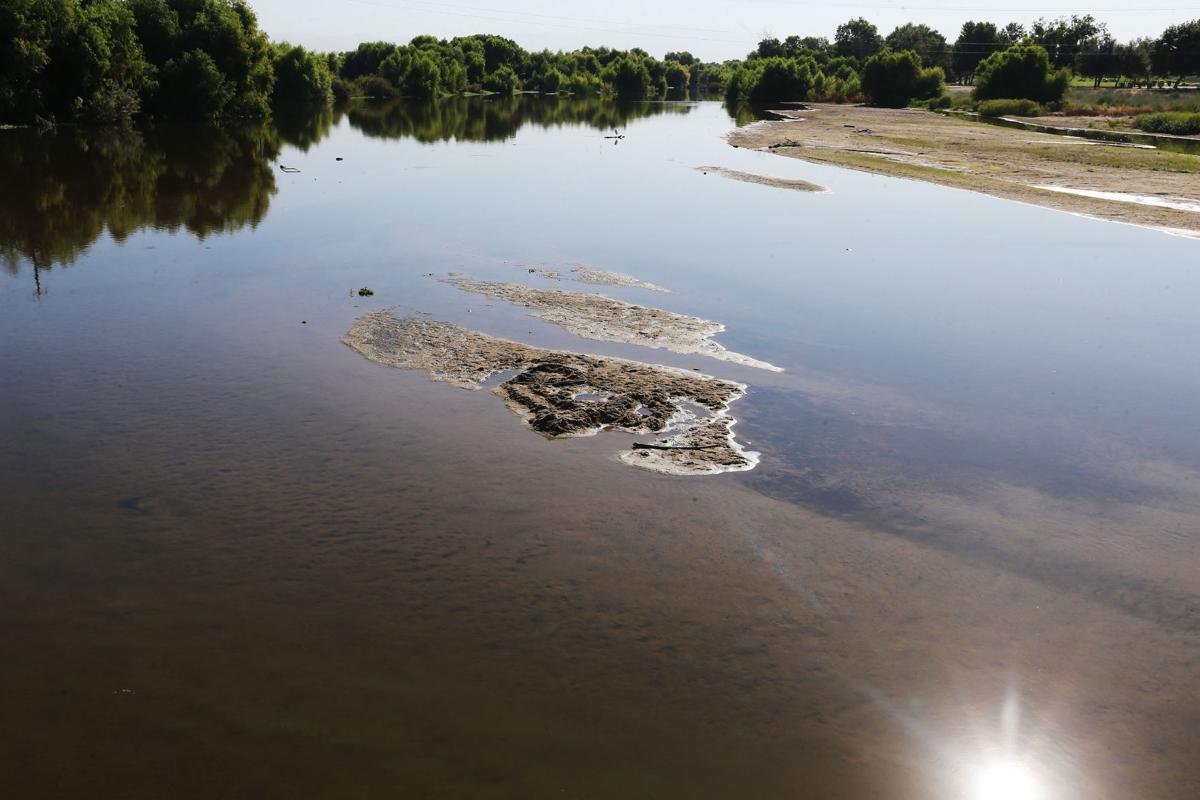 A mid-August photo of the Kern River near The Park at River Walk shows reduced water levels and sandbars starting to appear. 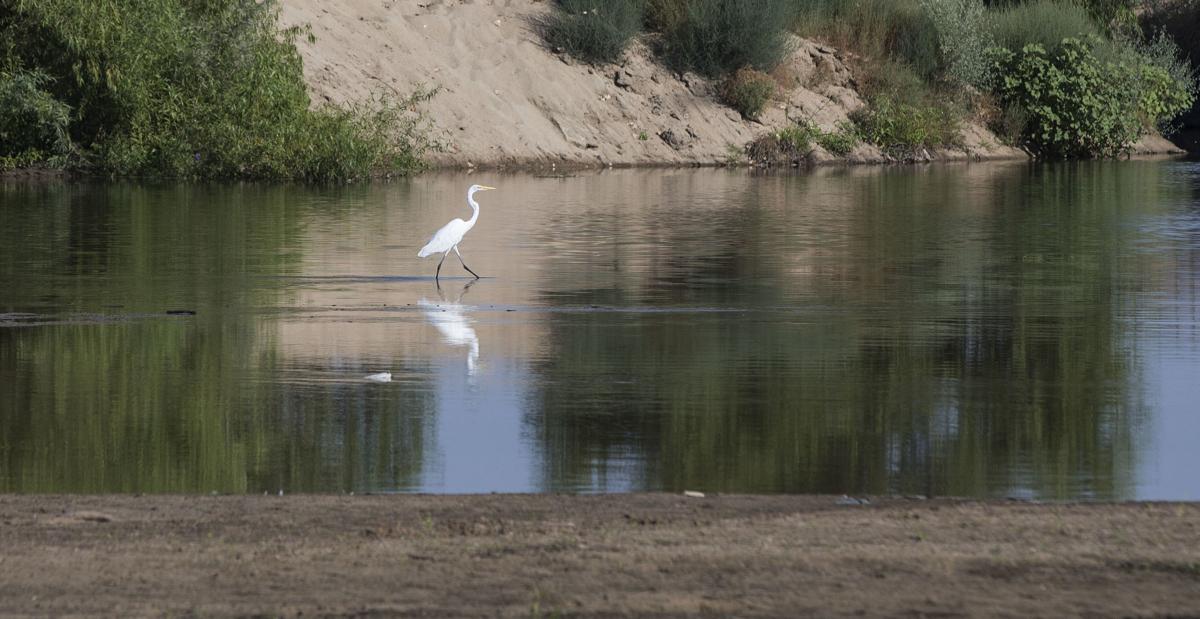 A photo of the Kern River near The Park at River Walk in August, which shows reduced water levels. 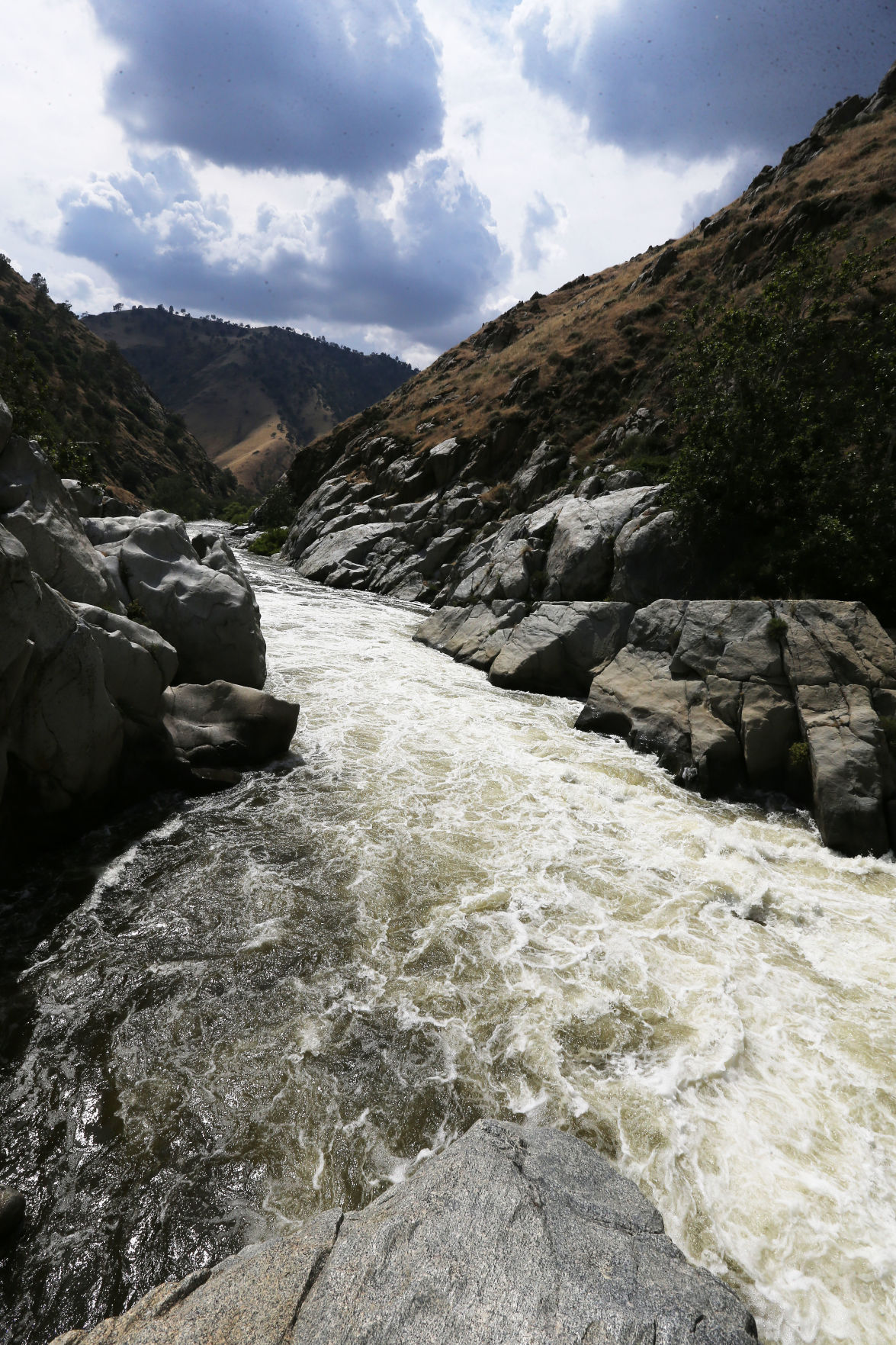 A swift current moves through the Kern River in late May.

A mid-August photo of the Kern River near The Park at River Walk shows reduced water levels and sandbars starting to appear.

A photo of the Kern River near The Park at River Walk in August, which shows reduced water levels.

A swift current moves through the Kern River in late May.

San Joaquin Valley farmers have pumped the basin’s groundwater so furiously and for so long that parts of the valley are sinking, endangering roads and bridges and even breaking one of the main canals that brings in water to support local agriculture.

So rosy, the numbers simply couldn’t be believed — and they aren’t.

“It’s obvious that some districts have created water with their paperwork,” Kern Groundwater Authority Chairman Dennis Mullins said in reference to the budgets, which are part of groundwater sustainability plans submitted by the board’s member agencies.

The difference between the groundwater overdraft claimed by member agencies and the deficit based on modeling was staggering. Overdraft means more water is being pumped out than goes back in.

That’s not going to fly, Mullins told the packed KGA meeting on Sept. 25.

“The state has made it very clear that these kinds of phony numbers won’t work,” he said. “If we can’t get this right, we might as well all go home and let the state take over our pumps.”

Fellow KGA board member Royce Fast admonished directors of each member agency to “step up” and provide some “adult supervision” over water district managers who he felt were protecting their turf at the expense of the larger Kern subbasin, which covers the valley portion of Kern County.

He noted some agencies presented water budgets that not only didn’t have a deficit, but showed an overall surplus.

“Everyone in this room knows that’s not true,” Fast said.

The KGA is an umbrella groundwater sustainability agency, a public body formed under the Sustainable Groundwater Management Act, which went into effect in 2015.

GSAs are required to bring overdrafted basins into "sustainability" by 2040. That means pumping can't diminish water quality or groundwater storage or cause the land to sink — all of which have become acute problems throughout the San Joaquin Valley.

The KGA is made up of 16 member agencies, mostly ag water districts, which each wrote its own draft groundwater sustainability plan.

Mullins and other KGA board members were dismayed after a couple of landowners crunched the numbers in those draft plans and it became clear that more water was being counted than truly exists.

Considering these plans are due to the California Department of Water Resources in the next 3½ months, Kern has no time left to get it right, Mullins said.

The stakes are high and getting higher.

Thus far under SGMA, water agencies, cities and counties have been doing the prep work needed to get a handle on groundwater pumping, creating GSAs and establishing protocols to track water inflow and outflow within their portions of each subbasin.

That’s when each GSA must show actual numbers for how overdrawn it is in terms of groundwater pumping.

More importantly, the GSAs have to detail how they intend to bring the subbasins into balance. There’s no way to do that without cutting demand — taking hundreds of thousands of acres of farmland out of production.

Some estimates peg the impending fallowing at more than a million acres throughout the San Joaquin Valley.

In Kern, nearly 200,000 of the 900,000 irrigated acres could be lost. That would mean about $600 million in lost farm income and 12,400 direct and indirect farming jobs, according to water district estimates.

Looming behind all of that is the specter of state intervention.

If KGA member agencies and the other GSAs in Kern can’t put together a coordinated plan that passes muster, DWR could deem the basin in probationary status and take over a portion of groundwater operations.

What would that mean?

Anyone who pumps groundwater would have to send detailed extraction reports to the state on each of its wells and pay fees of $300 per well and $40 per acre-foot pumped. The state would then develop an interim plan to bring the Kern subbasin into balance.

The fees alone would be staggering and no one knows what to expect from a state pumping plan.

With that in mind, the KGA board approved a “guidance document” at its Sept. 25 meeting that must be used by all its member agencies to get their water budgets in line.

The document mandates the methodology to calculate total water demand and each form of surface supply, including state and federal imported water, Kern River water, precipitation and “native yield.”

Native yield is considered water that naturally seeps into the subbasin and has become a sensitive topic.

Where some see natural seepage, others see owned recharge.

Who gets to claim that water will likely be the subject of lawsuits up and down the valley, particularly for entities that own river water rights.

While KGA member agencies recrunch their water budgets, some are grumbling about several aspects of where and how the KGA set the native yield number, at 0.15 acre-foot of water per acre of land.

That means if you’re a grower with 1,000 acres in the Kern subbasin, you are allowed to pump 150 acre-feet of groundwater per year of native yield, which is only enough to irrigate 50 acres of crop.

But all areas of the subbasin aren’t equal in terms of native yield, argued Dana Munn, general manager of the Shafter-Wasco Irrigation District. The far eastern and western foothill sections have little to no usable groundwater — no native yield.

If they were carved out of the equation, as Munn suggested, that would give farmers closer to 0.3 acre-foot of water per acre of land, which adds up quickly when you stretch it across thousands of acres.

Munn didn’t get any traction on that issue, however, and the KGA approved the guidance document.

Just a few water districts own rights to the Kern’s regular flows. Those are Buena Vista Water Storage District, Kern Delta Water District and the city of Bakersfield, which also owns the riverbed and adjacent lands.

None of those entities is a KGA member agency as each has formed its own groundwater sustainability agency.

Each has also claimed the native yield of 0.15 acre-foot per acre set by KGA as a supply in its water budgets.

Some water folks are grumbling about that, saying the Kern River parties are essentially “starving” the rest of the subbasin by unfairly hogging the entire river rather than allowing its waters to be factored into the native-yield equation.

“We are not grabbing all the water,” said Art Chianello, Bakersfield’s water resources manager. “People are being very difficult about this issue and we don’t understand why. It’s no different than if someone brings in (State Water Project) water and banks it. You don’t count that as native yield. Same with our river water.”

As SGMA closes in, though, and tensions rise, some are seeing the city’s river water as especially vulnerable.

That’s because both Kern Delta and Buena Vista take their water off the river through canals, while the city often runs its share through the riverbed, and state water law says you have to divert water from a river in order to “perfect” the right, according to some observers.

No way, Chianello said during a Sept. 26 open house at the Kern Ag Pavilion for the public to learn about the various groundwater sustainability plans.

“This is a controlled river from top to bottom. The city owns that water and the riverbed,” Chianello insisted during a heated conversation with Eric Averett, general manager of the Rosedale-Rio Bravo Storage District.

The river may be divvied up by agreements and legal settlements, but California water law is clear, insisted Averett: Water must be diverted from a river; otherwise, it’s covered by the Public Trust Doctrine and belongs to the entire basin.

“Bakersfield manages, controls and regulates flows in the river with the intent to recharge and recover those flows,” he said. “The city counts on that water as part of its supply and recovers it for later use. California law is clear that recharged water still belongs to Bakersfield.”

Averett said Rosedale-Rio Bravo wouldn’t go after the city’s water, but others facing the SGMA squeeze may feel differently.

“People are upset because their numbers don’t add up,” Chianello said. “Well, isn’t that where we’ve been for the last 35 years?”

Lois Henry is the CEO and editor of SJV Water, a nonprofit, independent online news publication dedicated to covering water issues in the San Joaquin Valley. She can be reached at lois.henry@sjvwater.org. The website is www.sjvwater.org.

SGMA: WHAT IS IT?

Passed in 2014 and enacted a year later, the Sustainable Groundwater Management Act aims to stop groundwater overpumping in critically overdrafted basins by 2040 and bring them into “sustainability.”

The San Joaquin Valley water basin is considered critically overdrafted, as are most of its subbasins, which include:

SGMA mandated that groundwater sustainability agencies, made up of local agencies (mostly agricultural water districts), cover each subbasin completely. Those were formed in 2017.

You can look up which GSA you’re in here: https://sgma.water.ca.gov/webgis/index.jsp?appid=gasmaster&rz=true.

Each GSA must provide a groundwater sustainability plan (GSP) to bring the subbasins into sustainability. The GSAs can write individual GSPs, work together on a single plan, or provide chapters within a larger GSP.

The plans are to be submitted to the California Department of Water Resources by Jan. 31, 2020.

Drafts are currently circulating and public comments are being received through Nov. 28.

Though each GSA may write its own sustainability plan, the state requires that all the data and methodology be consistent and the numbers agree.

Under that scenario, the state would require all entities that pump groundwater to provide it with extraction reports on each well being pumped. The state also would require fees of $300 per well and $40 per acre-foot of water pumped.