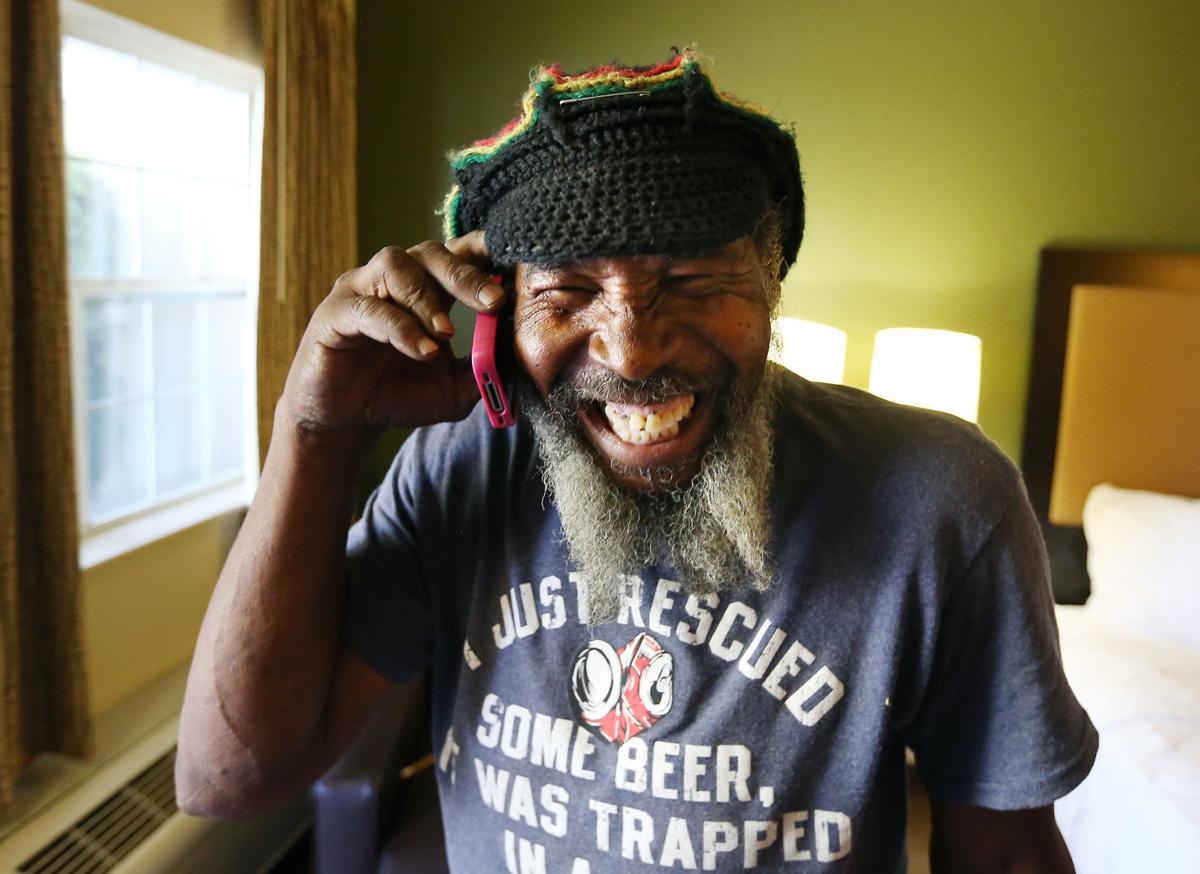 Former NFL player Kenny Graham wanted to thank those with the NFL that helped him get his new room in Bakersfield Friday. 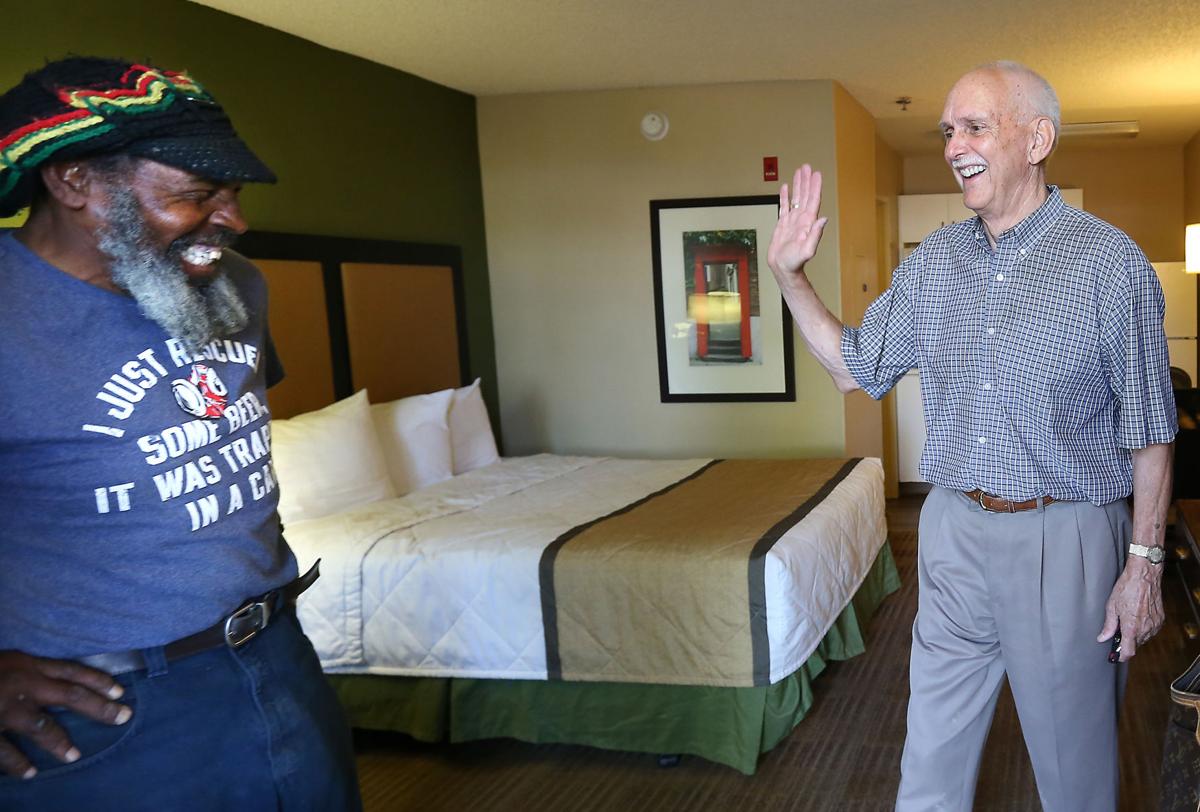 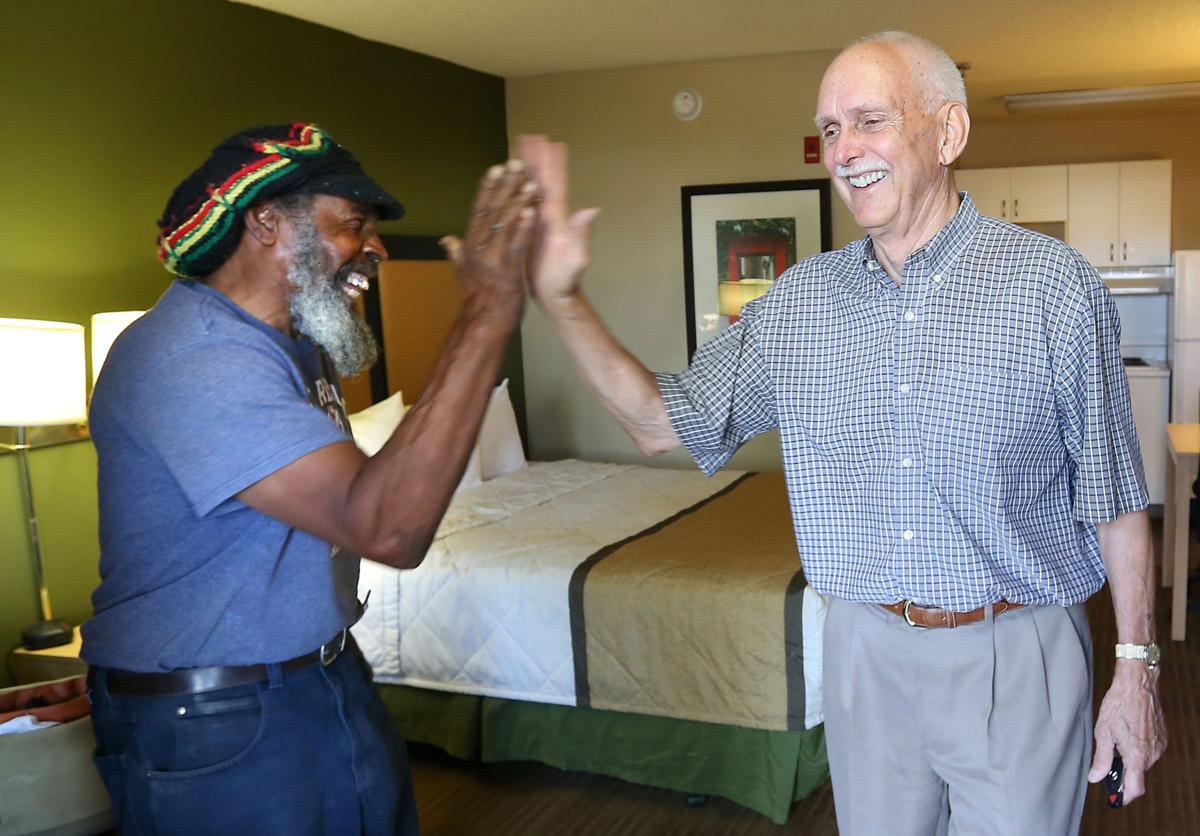 Childhood friend Howdy Miller gives Kenny Graham a high-five after Graham gets into his new living quarters thanks to the NFL and Graham's longtime friends. 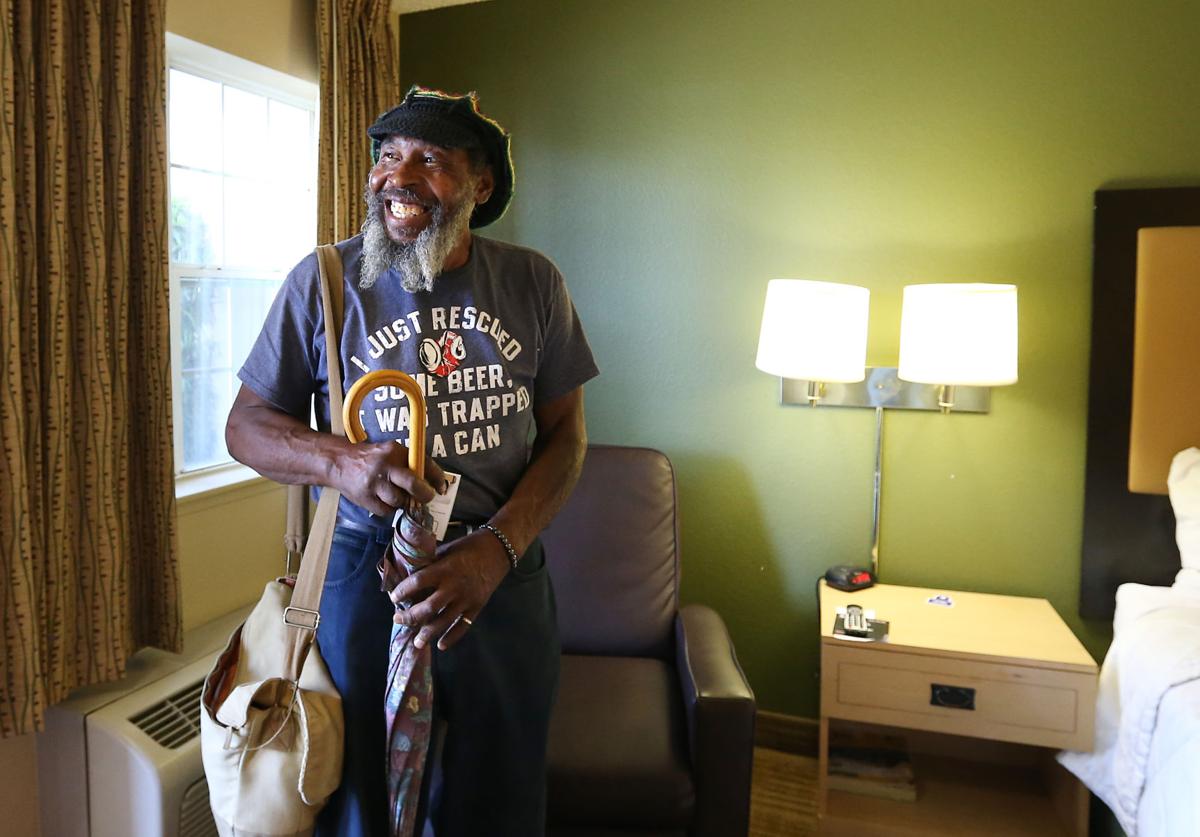 Former NFL player Kenny Graham is pleased with his new room provided by the NFL after living on the streets.

Former NFL player Kenny Graham wanted to thank those with the NFL that helped him get his new room in Bakersfield Friday.

Childhood friend Howdy Miller gives Kenny Graham a high-five after Graham gets into his new living quarters thanks to the NFL and Graham's longtime friends.

Former NFL player Kenny Graham is pleased with his new room provided by the NFL after living on the streets.

He’s off the dirt.

I was getting to the point I didn’t think it would happen.

But the combined efforts of a lot of good folks helped get former pro football player Kenny Graham off the vacant lot where he’s been living the last three years and into a long-term hotel.

The room is small, it’s nothing fancy and it isn’t a permanent solution.

“But I’m off the dirt,” Kenny said Friday afternoon, beaming, as he looked around the room. “And I’m gonna get in that tub and soak for two hours.”

I’ve been following Kenny’s story since his friend Mark Downing brought it to my attention in mid-May.

Kenny goes there most days to open reams of sweepstakes mail.

Downing got to talking to Kenny, an upbeat, friendly guy, and realized he had been a phenomenal ball player back in the late 1960s.

How could the Kenny Graham who’d been all-pro four years in a row for the San Diego Chargers be living under a fig tree on a vacant lot in Bakersfield?

Downing was worried no one was looking out for Kenny. That, perhaps, he was suffering from CTE, chronic traumatic encephalopathy, brain injury from repeated blows to the head.

He started checking up on Kenny, taking him to lunch and driving out to the vacant lot, which Kenny owns, to make sure he was OK.

Then Downing called me.

Between the two of us, we tried to convince Kenny to get a little apartment. He has a small pension from the NFL and Social Security. He could afford a basic place.

But we ran up against what I’ve been calling “the glitch” in Kenny’s thinking.

Don’t get me wrong, Kenny’s sharp. He’s a smart guy and knows what’s going on. But when it comes to certain things, his logic skips a beat.

Living under a fig tree on a vacant lot, no heat, A/C or running water, was just fine with Kenny.

It’s his land, free and clear, and he could make do.

Why spend money on rent?

Money that could better be spent on achieving his dream — to build low-income apartments on the lot and buy himself a Rialta motorhome.

Meanwhile, he spends most of his money on those sweepstakes convinced he’s going to hit it big and helping random people who apparently come around his lot looking for money.

After my first story on Kenny in late May, several boyhood friends came out of his past wanting to help.

They got together with Kenny and one of Kenny’s daughters, Danielle, and tried hard to convince him to A) get an apartment and B) pursue legal action against the NFL for the brain injuries.

After agreeing that his friends were right, that they were making a lot of sense, Kenny went straight back to the lot and his sweepstakes.

But those boyhood friends and Downing didn’t give up.

They’ve been scheming how best to entice Kenny into stable housing starting with removing obstacles.

Kenny had a lot of dogs.

When you live on a vacant lot in certain parts of town, you can expect a stray dog, or several, to cross your path.

Sure enough, a stray showed up, then another. And wouldn’t you know? One of the strays had four pups. Add another stray and, yeah, Kenny had seven (7!) dogs.

Which meant any talk of getting an apartment would quickly be shut down with: “What about my dogs?”

WHAT ABOUT THEM DAWGS?

In a “you can’t make this stuff up” kind of encounter, Downing was working at Sorella’s one night and another waiter told him about this really positive, friendly customer who had something to do with rescuing dogs and maybe Downing should talk to him about his friend Kenny.

It was Larry Keller, founder of Critters Without Litters, Bakersfield’s only low-cost, nonprofit spay/neuter center.

Within days of hearing Kenny’s story, Keller had met with Kenny and convinced him to get all the dogs fixed (something I had zero luck with) and to let five of the dogs go to Pet Matchmaker Rescue run by Morgan Sokolow Gall.

Not only that, Keller drove out to Kenny’s lot himself, gathered up all the dogs, had them fixed and returned the two Kenny wanted to keep at no charge.

So, remember that when it comes time for holiday giving, please.

THE POWER OF SHAME

Meanwhile, Downing was hammering the NFL about Kenny’s situation.

Surely, he thought, the NFL could help.

Yes, after being blacklisted for advocating for players’ rights and leaving football, Kenny didn’t make the best life choices.

In fact, when I ask what he was doing during certain decades, his typically sharp memory fades.

“Maybe I don’t wanna remember,” he told me once when I continued to press him for information.

Even so, Downing thought, the NFL could do something.

After being told by one person that Downing should call a social worker, Downing got fed up.

“I went on gripo.com and blasted them. I said I couldn’t believe the NFL made billions off of players like Kenny, but wouldn’t lift a finger to help now.

“They called me the next day,” Downing said.

Very quickly, the NFL Foundation promised Kenny a grant to help with medical expenses and paid for a long-term hotel room.

How long he’ll have the room is up in the air. Downing and Kenny’s friends Howdy Miller and Cliff Goodrich are hoping it’s long enough to find more permanent housing.

As Downing was getting all that settled Friday, everyone wondered what to do with Kenny’s remaining dogs, Blondie and PeeWee.

Something needed to happen fast and with no other options, I offered to take them for a while. So, I guess that makes me an official member of Team Kenny.

I’ve mentioned Kenny’s family mostly in passing so far. But, believe me, daughters, sons, cousins and aunts have been a part of this story all along.

He has relatives in Bakersfield and up and down the state with whom he’s lived.

But Kenny’s cantankerousness make him a difficult house guest.

Rather than consider an apartment, which relatives tried to get him into, Kenny opted to live on his property under the fig tree.

And he would not budge no matter how relatives have pleaded.

This isn’t the first time Kenny’s lived rough rather than abide by someone else’s rules.

An“unofficial Chargers historian,” a man named Todd Tobias, was researching players from the AFL days when he found Kenny in Santa Monica.

“He wrote me a letter on the back of a flyer for the Santa Monica library that said he was living out of his car and would love to talk to me but didn’t have a phone,” Tobias said. “Eventually, I put him in touch with the Chargers and he went to one or two of alumni events. Then I heard several years ago that he was living in a house in Sacramento and jogging on a football field at a nearby college and had a telephone for the first time in years.

“Then he dropped off the face of the earth again.”

Tobias isn’t interested in Kenny only for historical reasons.

Leslie “Speedy” Duncan, who was right corner when Kenny was defensive back, asked Tobias to find his old teammate.

Thanks to Tobias and Downing, the former all-stars got to speak on the phone recently.

Then another former teammate, Earl Faison, died the past weekend and Tobias realized how important it is for these old timers to keep in contact.

They were tough men in their day but tough doesn’t conquer time when you’re in your mid-70s.

Tobias is hoping Kenny can take a break from his sweepstakes and make a trip to San Diego, where most of his former teammates still live.

That would be nice.

But, with Kenny, it’s one thing at a time.

Opinions expressed in this column are those of Lois Henry. Her column runs Wednesdays and Sundays. Comment at http://www.bakersfield.com, call her at 395-7373 or email lhenry@bakersfield.com.

OH YES, HE DID

In my last installment, I mentioned that Kenny Graham played an entire season (ether 1967 or 1968, he couldn’t remember which) with his left arm strapped to his side after surgery for a dislocated shoulder.

I got an angry call the following Monday from a man who insisted that couldn’t be true.

“The NFL would never have allowed that!” he said. “That man wouldn’t have played one play, much less an entire season with one arm!”

He asked how I had verified the information and I tried to explain how I’d tried to find any information on injuries or injured players through NFL records but none seemed to exist from those days.

“You FAILED in your journalism ethics!” the super duper nice man informed me.

Later that day, I got Leslie “Speedy” Duncan’s number and asked him about Kenny’s arm.

Duncan had played right corner the same years Kenny played and knew exactly what I was talking about.

“Yeah, he did,” Duncan said about Kenny playing with his arm strapped down. “Kenny would play injured. He didn’t want to lose his position. Me? I left the field if I got hurt, but Kenny wouldn’t.”

He’d had the surgery in the off-season but at the start of the ‘67 season (according to Duncan), his shoulder kept getting re-dislocated. So one of the trainers made up a harness that kept Kenny’s arm strapped down.

Yes, he played that way and yes, he made all-pro that year as well.

I should have verified the information initially as it makes the story stronger.

And, hey, how often do you have someone named “Speedy” in a story?

But I think “FAILED” is a bit harsh.

With the terrible fire happening near Lake Isabella, it’s hard to focus on much else.