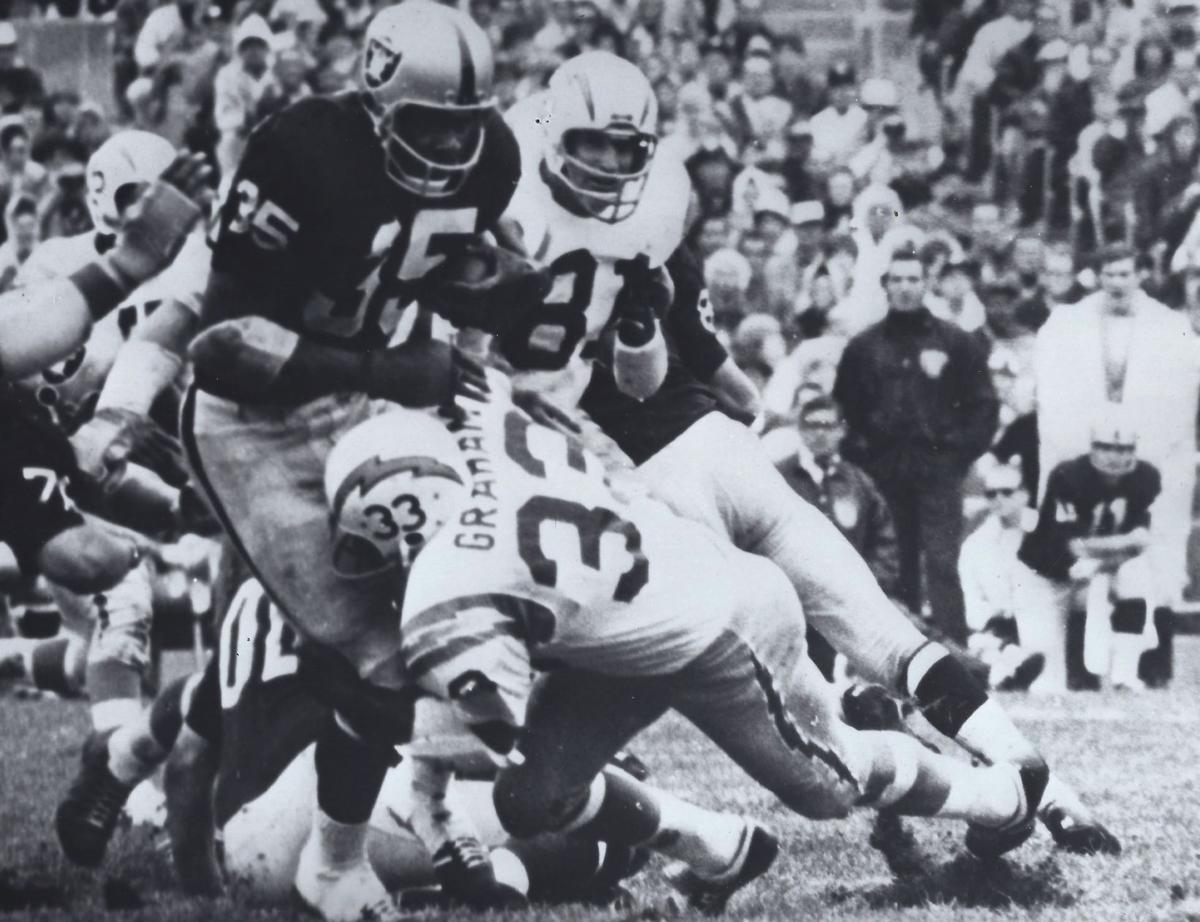 Kenny Graham, No. 33, takes down Oakland Raiders running back Hewritt Dixon during a game in the late 1960s. Graham was a defensive back for the Chargers from 1964-1969. He made all-pro for four of those five years. He was recently living under a fig tree on an empty lot in Bakersfield. 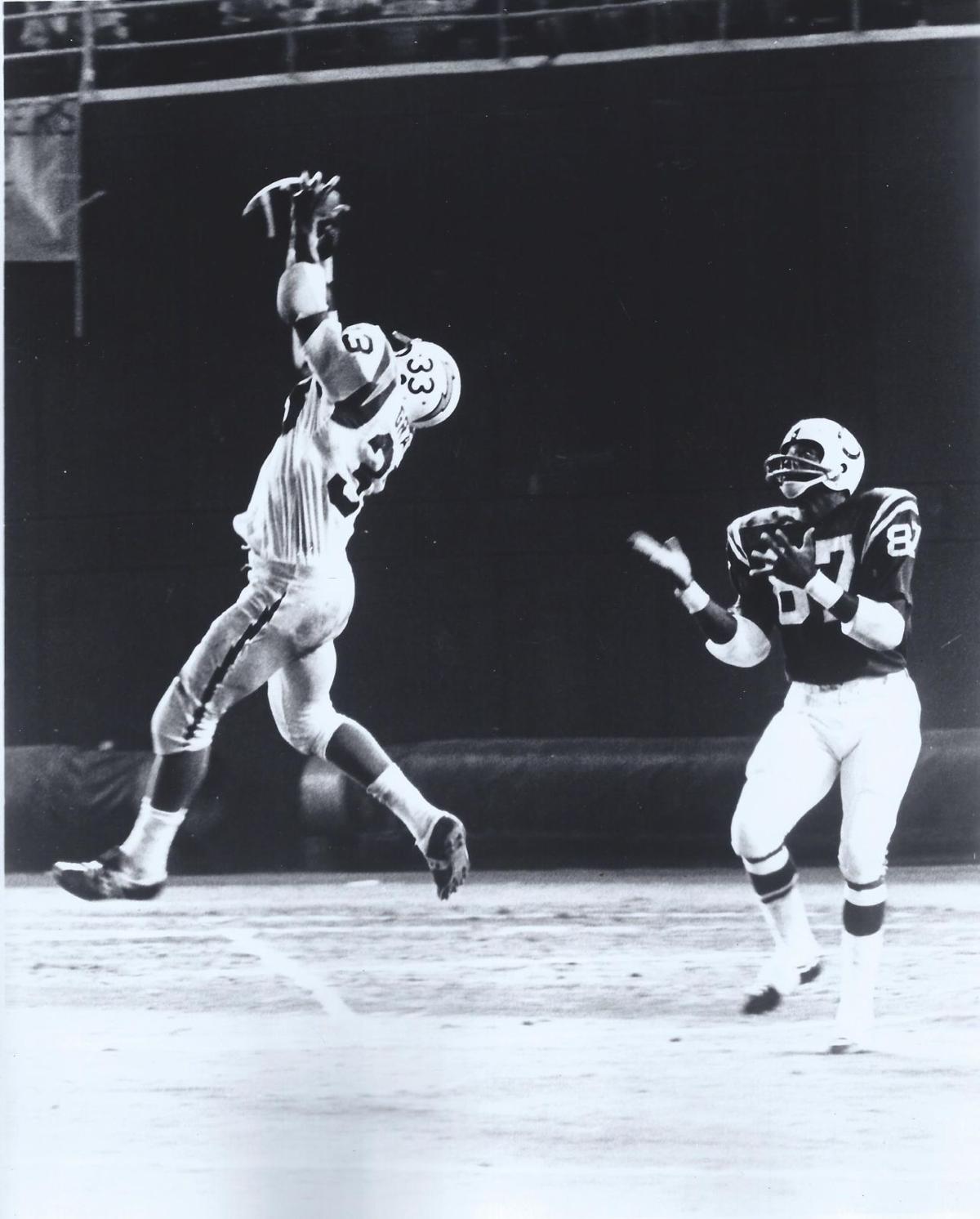 Kenny Graham, No. 33, intercepts a ball during a game with the Baltimore Colts in the late 1960s. Graham played for the San Diego Chargers from 1964-1969. He was living on a vacant lot in Bakersfield until recently. 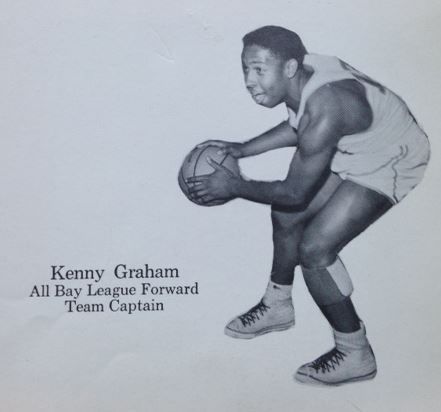 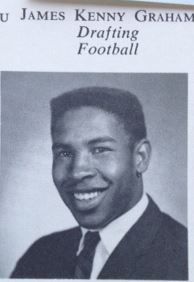 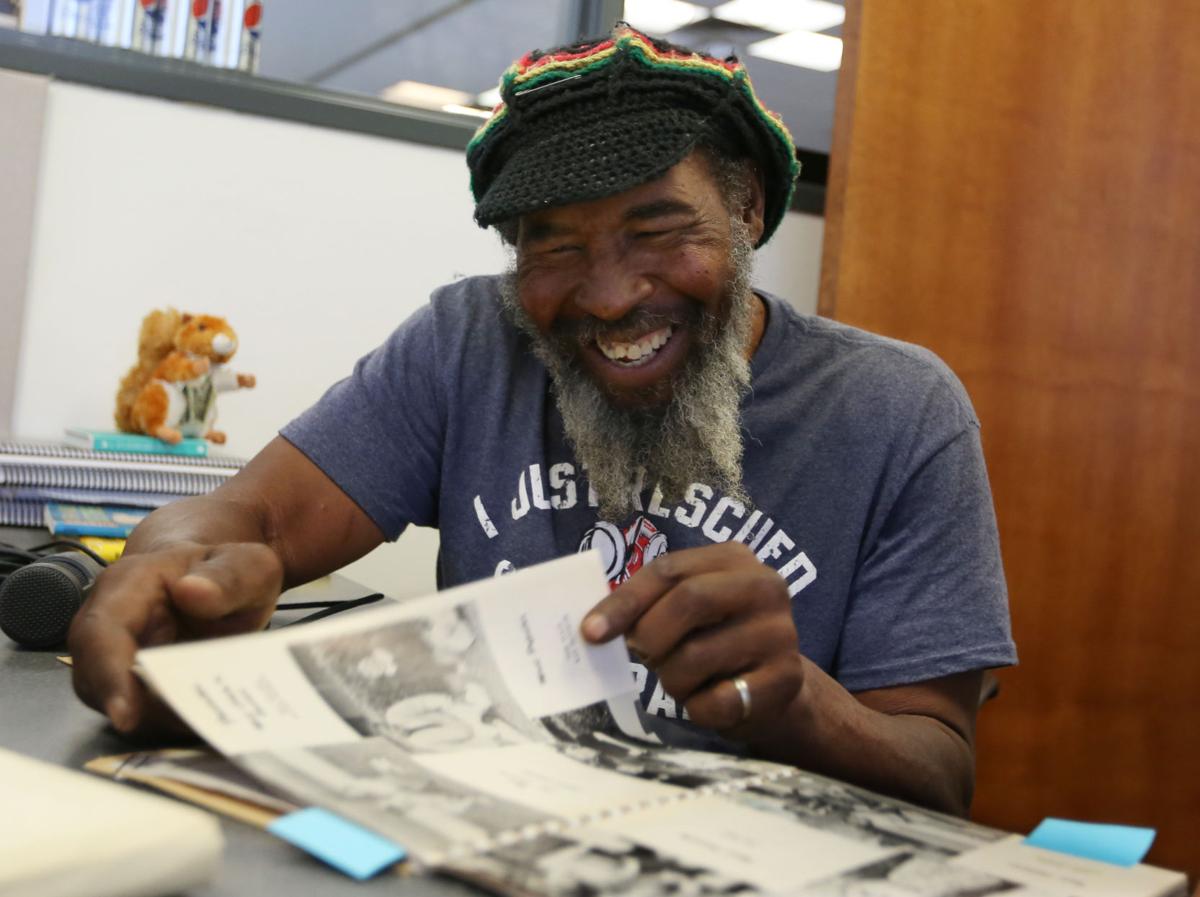 Kenny Graham looks at photos of himself in a old yearbook. 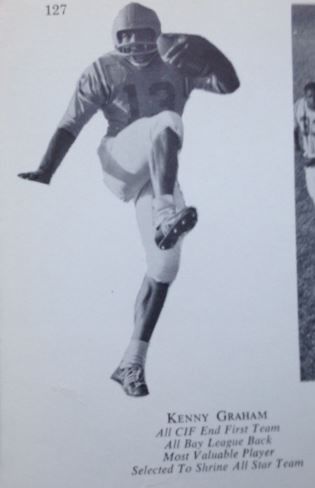 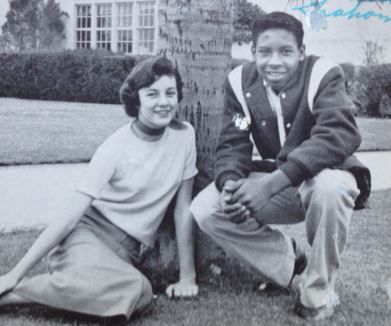 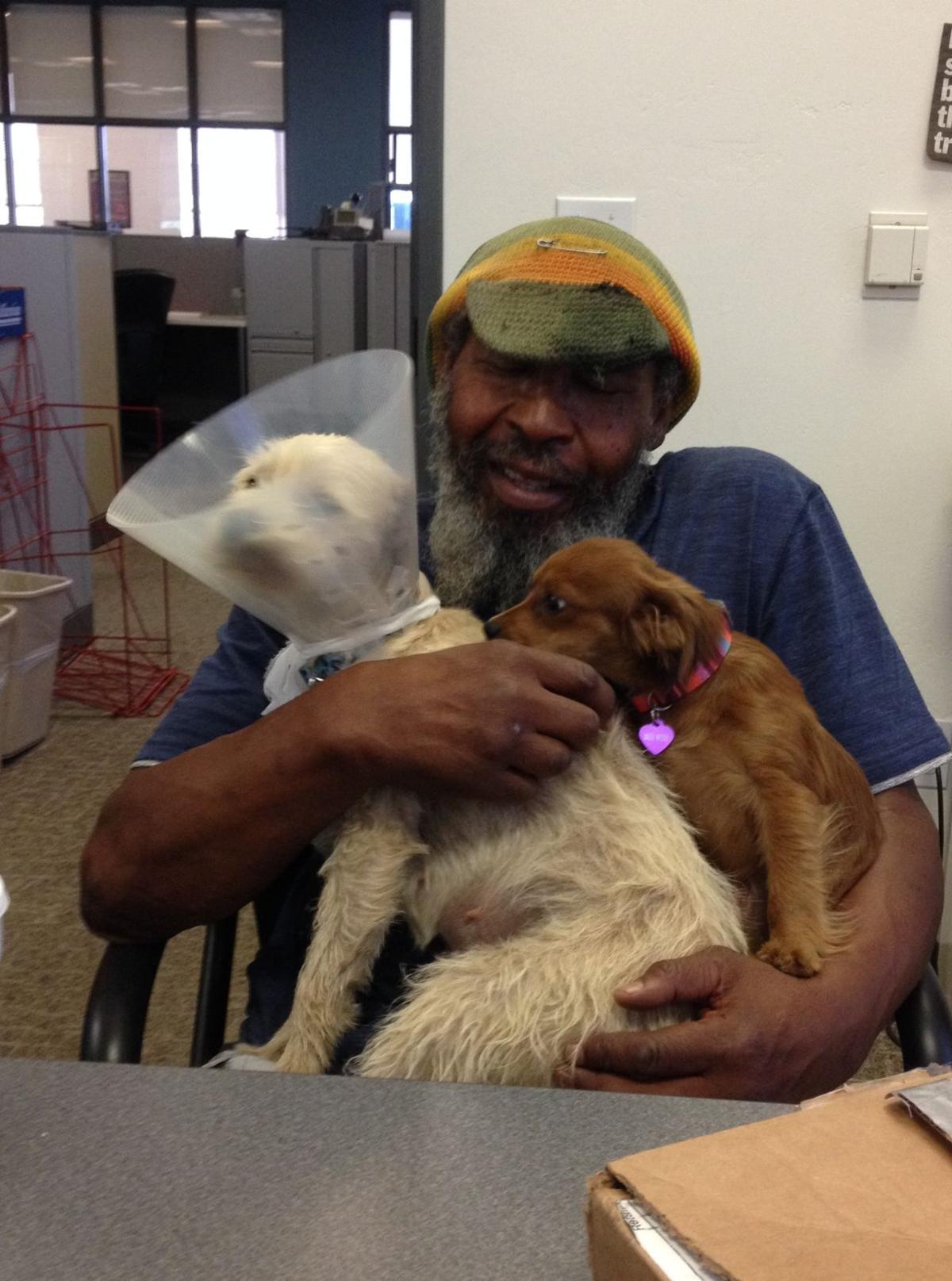 Kenny Graham cuddles two of his dogs, Blondie and Pee Wee, who have been in foster care while he sorts out his living situation. Pee Wee recently went missing in downtown Bakersfield.

Kenny Graham, No. 33, takes down Oakland Raiders running back Hewritt Dixon during a game in the late 1960s. Graham was a defensive back for the Chargers from 1964-1969. He made all-pro for four of those five years. He was recently living under a fig tree on an empty lot in Bakersfield.

Kenny Graham, No. 33, intercepts a ball during a game with the Baltimore Colts in the late 1960s. Graham played for the San Diego Chargers from 1964-1969. He was living on a vacant lot in Bakersfield until recently.

Kenny Graham looks at photos of himself in a old yearbook.

Kenny Graham cuddles two of his dogs, Blondie and Pee Wee, who have been in foster care while he sorts out his living situation. Pee Wee recently went missing in downtown Bakersfield.

With the terrible fire happening near Lake Isabella, it’s hard to focus on much else.

So I’ll give you just a short update on former San Diego Charger all star Kenny Graham.

He may be off the dirt but he’s a long way from settled.

Thanks to some serious badgering by Kenny’s friend Mark Downing, the NFL Player Care Foundation has stepped in and is helping fund a long-term hotel room for Kenny as well as some very neglected medical care.

Kenny, an all-pro defensive back for the Chargers from 1964-1969, is nearsighted but hasn’t had glasses for some time.

Years and years, he says.

That’s about to change.

He had his first doctor’s appointment on Thursday and will be getting two pairs of glasses in the mail shortly, he said.

Next up, a general physical with another doctor on Monday.

All courtesy of the NFL Player Care Foundation, which is funding the visits as well as making the appointments.

All Kenny has to do is get himself there.

“Oh yeah, it went smooth, no problems,” Kenny, 74, told me of his bus ride to the doctor on Thursday.

Though he could access Medicare, gets Social Security and has a small pension from the NFL, Kenny hasn’t bothered with things like medical care and proper housing for several years now, opting instead to make do living on a dirt lot he owns while he plays mail sweepstakes hoping to hit it big.

He feels that paying rent would only slow his progress toward his dream — to buy a Rialta motorhome and build low-income apartments on his property here in town.

No amount of reasoning can dissuade Kenny from his belief that those sweepstakes are the ticket to his goal.

Downing, a waiter at Sorella’s and website designer, befriended Kenny at the downtown post office and has been trying to help him improve his living conditions for the past few months.

At first, Downing didn’t believe Kenny’s stories of his star athlete past. But digging into the internet, he found clips of Kenny’s outstanding plays, photos, player cards and more.

But after saying he was blacklisted in 1970 for trying to advocate for player’s rights, Kenny left football.

He lived in Newark, New Jersey for a number of years, working as a roofer, then for city hall as an assistant to the mayor, Sharpe James, who went to college with Kenny.

His memories of those years are as clear as glass.

He can tell you how the roofing tar burned his wrists and how the unions kept competing roofing companies out of their territory by any means necessary. He has stories about James as well, both during college and after.

Ask about later years, after he returned to his hometown, Santa Monica, and Kenny’s detailed recollections fade, his answers become vague. Perhaps those years are better left lost, he suggests.

Kenny’s father lived in Bakersfield where he bought land that was left undeveloped and came to Kenny.

After living with one of his daughters, Danielle Graham, for some years in Sacramento, Kenny ventured south where he lived with a series of relatives here in Bakersfield.

When he came up against rules he didn’t care for, Kenny moved onto his property. His vacant property.

That was about three years ago, Danielle Graham told me. Family members each tried, and failed, to get him into housing.

Even after the city took all his belongings — tent, cot, bicycle, photo albums, etc. — following an abatement order, Kenny stayed on the lot.

He grabbed an abandoned couch from the porch of a nearby vacant home, draped some blankets over a fig tree to the back of the couch and — voila! — home.

He’s been living that way since at least the beginning of the year.

He was facing another abatement order when Downing succeeded in getting the NFL Player Foundation to help with the hotel room.

“As far as a long-term solution, that’s fluid right now, we don’t really have an answer,” said Nate Recknagel, a social worker with the Player Care Foundation. “We want the best for him, but we can’t force him to do anything. And his expectations and everyone else’s are different.”

The Rialta motorhome is still the goal, Kenny told me on Thursday when he came to my office to visit his dogs, Blondie and Pee Wee. (He had seven dogs on his property, but agreed to give five to Pet Matchmaker Rescue. He couldn’t take Blondie and Pee Wee to the hotel, so I took them in. Sigh.)

He hugged and cuddled the dogs on Thursday and promised them over and over he’d get them soon. As soon as he has a Rialta motorhome.

“Oh, man! That makes water comes to my eyes,” he said as he set the pups down.

You know, it’s not my dream.

A motor doesn’t even seem rational given his circumstances.

But it’s better than under a fig tree. And, hey, someone who loves his dogs that much deserves to have a dream or two come true.

Zoning matters
I’ve received a lot of interest in Kenny Graham and his Quixotic fight to live on his property as he sees fit.

Lots of people have come up with suggestions including laying a concrete slab, pitching a tent and calling that a “permanent” dwelling. I’ve even heard from folks willing to donate trailers or pitch in to buy one of those “tiny houses” that are all over the internet.

It’s not that easy.

“You can’t camp on it, you can’t live in a motorhome on it,” Burns told me.

I’m not sure where a “tiny house” falls under the rules but you definitely can’t just lay a slab of concrete and live on that.

Though a number of people, including Kenny, have told me it’s unfair that a man can’t live how he wants on his own property, remember, neighbors have rights too.

That’s why we have zoning laws in the first place.

He’s off the dirt.