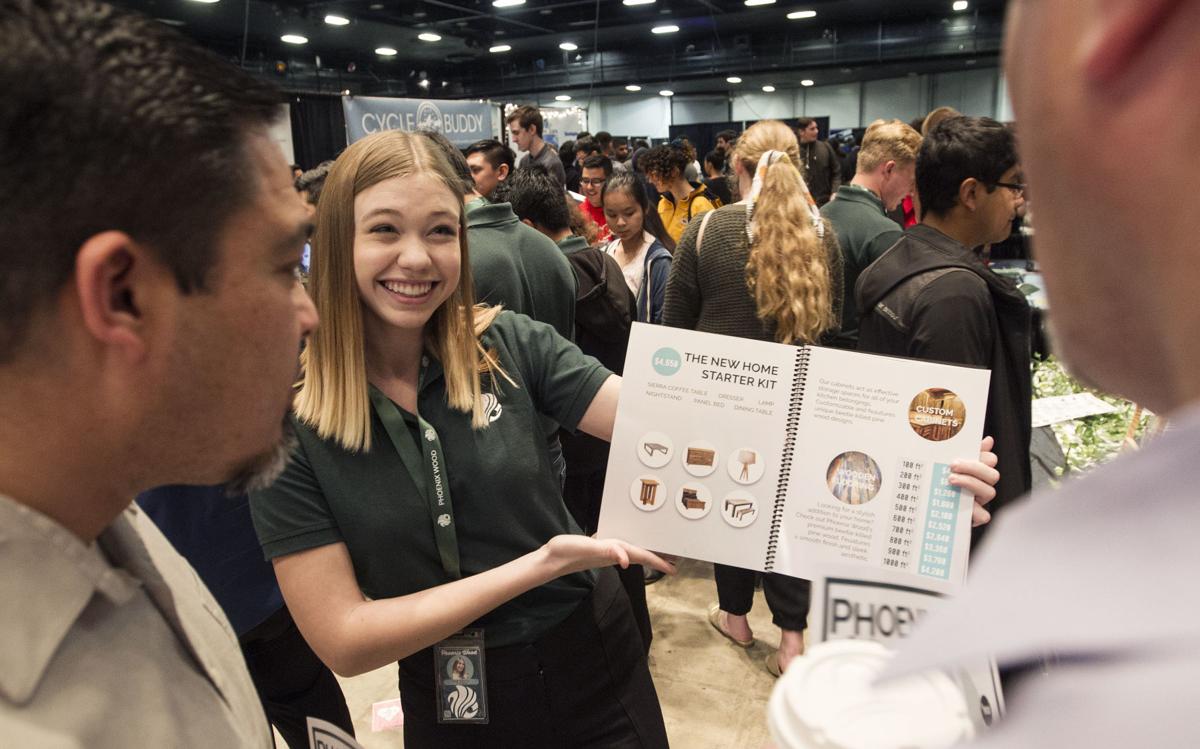 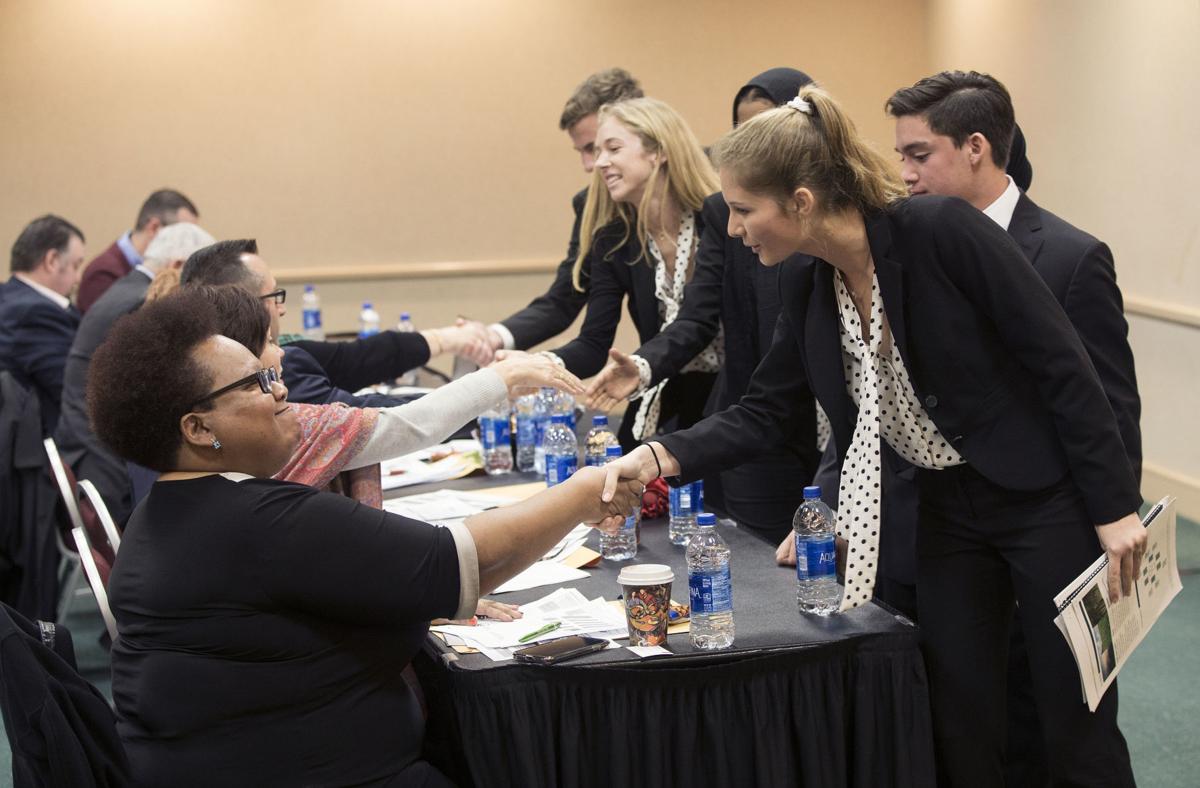 Bakersfield High student Elisabeth Hayward shakes hands with a judge after she and the rest of the team presented and answered questions about their business plan at the Virtual Enterprise state competition at the Rabobank Convention Center Thursday. 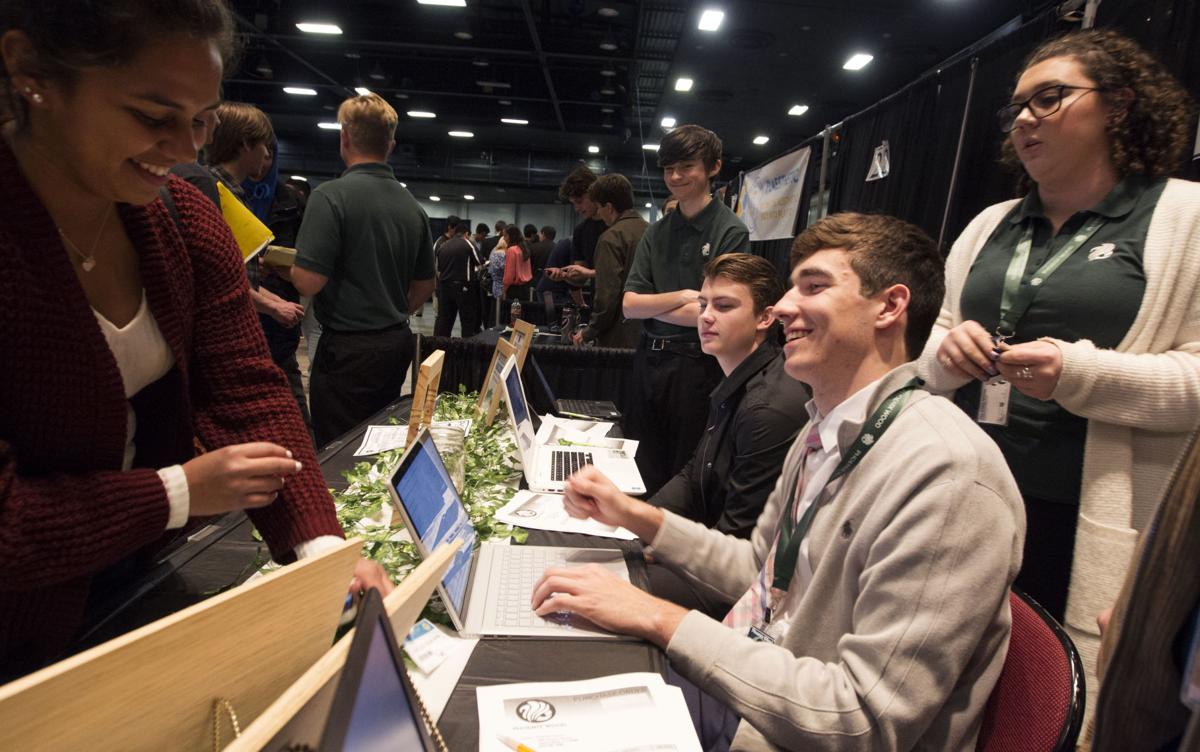 A student shows her virtual credit card to purchase a product from Tanner Williford representing virtual company Phoenix Wood and Stockdale High School during the trade show at the Virtual Enterprise state competition at the Rabobank Convention Center on Thursday. 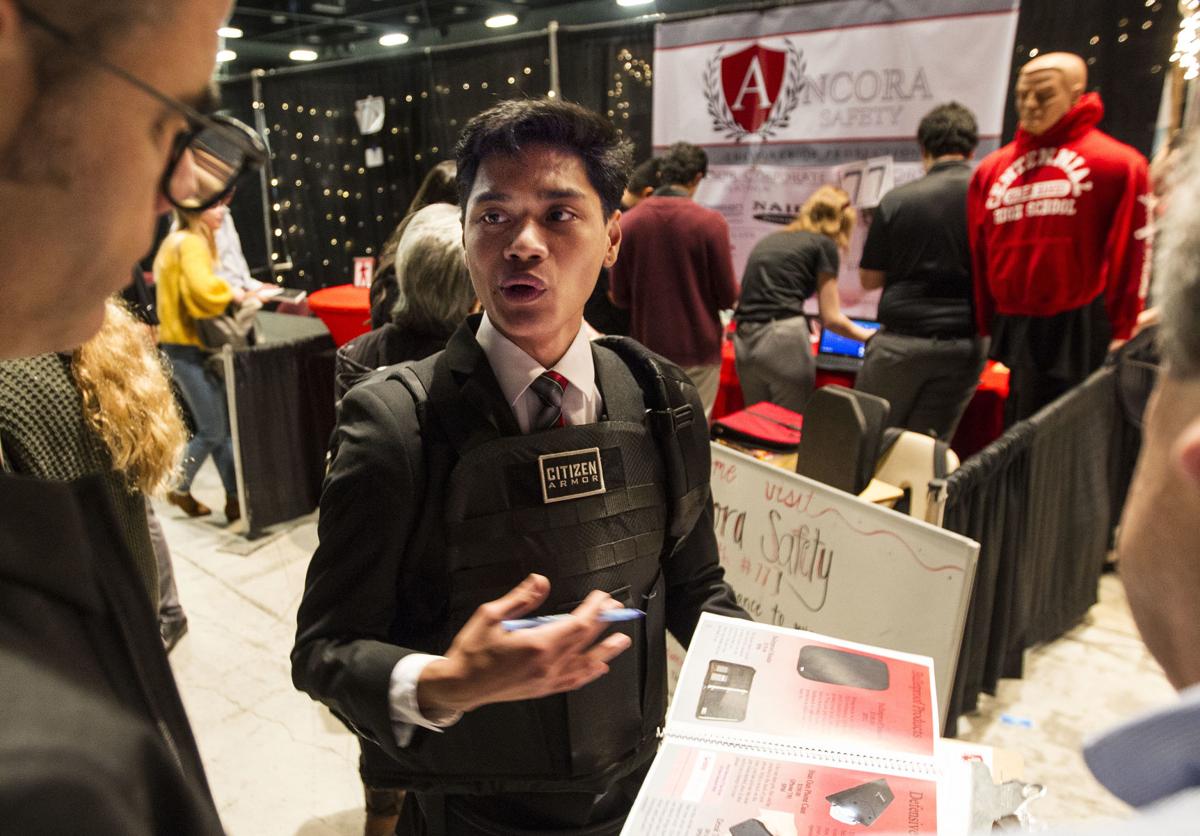 Bakersfield High student Elisabeth Hayward shakes hands with a judge after she and the rest of the team presented and answered questions about their business plan at the Virtual Enterprise state competition at the Rabobank Convention Center Thursday.

A student shows her virtual credit card to purchase a product from Tanner Williford representing virtual company Phoenix Wood and Stockdale High School during the trade show at the Virtual Enterprise state competition at the Rabobank Convention Center on Thursday.

The Rabobank Convention Center has hosted many events over the years where businesses sell their wares. This week, there was one key difference — all the businesses were created by high school students.

The convention center hosted the annual Virtual Enterprises California State Conference and Exhibition on Wednesday and Thursday. Students from Kern County and around the state came to show off the virtual businesses they have created and participate in competitions.

Students form their companies and plan for competitions through Virtual Enterprise classes offered through their schools, which aim to give students real-world business experience in a virtual setting.

“I think Virtual Enterprise is incredible,” said Bakersfield High student Margo Kuney. “I wasn’t sure what I wanted to do when I got out of high school when I entered this program, but now I can say that I want to major in business. I’ve learned so much already, and this is a great opportunity to have a leg up going into college.”

Besides BHS, Centennial and Stockdale high schools were other local finalists in the state business plan competition, the most prestigious competition at the conference. Out of 38 teams, all three schools scored high enough to make it to the national competition in New York City this April.

In total, six teams will represent California in the event.

The BHS team had big expectations to meet this year, having won the national competition for the past two years. Returning with a new business, team members said the pressure was high.

“There’s a lot of pressure on us to meet our expectations because I think we’re the hardest judges on ourselves,” said Elisabeth Hayward. “We want to be able to feel like we’ve done a good job. We’ve worked really hard on this.”

This year, the students created a virtual company called Current Threads, which sells shirts made out of sustainable fabrics including hemp, bamboo and recycled plastic. According to the team, their products use 80 percent less water than traditional cotton shirts.

“We thought recycling is a big problem, especially with China not taking any more plastics. We’re going to have this giant influx of plastics in the United States,” Hayward said. “We also wanted to address water concerns with California’s drought, and the hemp and bamboo lines help with that.”

On Thursday, schools showed off their products at a trade show that allowed the students to interact with customers and make virtual sales. Attendees were able to receive fake credit cards with virtual money on them to spend at the businesses of their choice.

One of the businesses that seemed to be grabbing a lot of attention was Ancora Safety, created by students at Centennial High. The business sells products focused on helping keep people safe in the event of an active shooter situation or similar emergency.

For senior Joshua Duryea, this was his first time participating in the state competition.

“It’s been a great experience,” he said. “I always enjoy it when I see a new customer come up and they haven’t heard of our business and we explain it to them. A lot of people seem very interested and understand what we’re trying to accomplish. We may be a virtual company, but we are bringing light to a real-world concern.”

Duryea said he’s been interested in learning more about business, as he eventually wants to work in a corporate position after he graduates high school.

“I like the idea of networking, connecting with other people and striving to build a company that can better the community,” he said. “You build a lot of networking in this program, so I’m hoping those are connections I can use in the future.”

Stockdale High is participating this year for the first time in more than five years, after it was resurrected by teacher Brian Devitt. A group of students created a company called Phoenix Wood, which sells handcrafted and customizable products made from reclaimed dead wood from California forests.

Despite coming to the competition with less of an advantage than other schools, Stockdale High still managed to do well enough in the state competition to make it to nationals.

“Beginner’s luck, I guess,” said Ninnett Avila, who was introducing attendees to the company on Thursday. “It’s been a new process for everyone, trying to figure out how it all works, but it’s been an amazing experience. I’ve got to meet some amazing people.”

Despite the strong competition, Kuney said she is happy that Bakersfield had such a strong presence at the state conference.

“Considering that there are three Bakersfield schools in the top eight in the state for the business plan is absolutely amazing. It really shows how great Bakersfield can really be,” she said.

Here are the six schools across the state who placed in the state Virtual Enterprise competition at the Rabobank Convention Center on Thursday. They will be heading to the national competition in New York this April.